Existing home sales in January 2020 were either lackluster or robust depending on which statistic or metric is viewed, based on the National Association of Realtors® (NAR) latest press release. NAR sales focus is on a seasonally adjusted annualized rate (SAAR). The following describes four individual conclusions regarding existing home sales in January 2020 using NAR data. NAR lead the press release with the Sales Down 1.3 Percent headline.

Up 11.6 Percent in January 2020 – listed in a table at nar.realtor comparing actual closings for the month vs January 2019

Up 11.7 Percent in January 2020 – total number of closings (not seasonally adjusted) in the 12-months ending January

Actual closings in January 2020 totaled 318,000 compared to 285,000 in January 2019, hence sales were up 11.6 percent. Since that is the number of homes that transferred ownership, this is the appropriate statistic to describe housing market performance in January 2020 – in my opinion. The following table shows the total number of sales for the prior 12-months, with sales up 11.7 percent. Median existing home prices (shown monthly in the blue bars) increased 6.8 percent to $266,300 in January 2020 compared to a year ago. 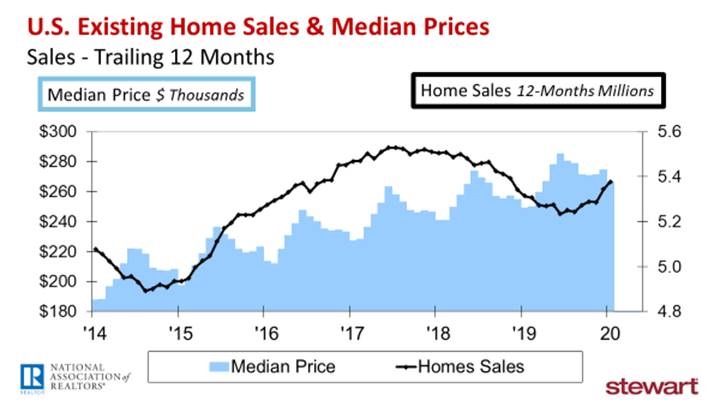 Despite an extreme limited inventory of homes available for sale, low interest rates and a growing economy are fueling the demand for housing, and ultimately driving housing sales.