The Federal Reserve yesterday, based on concerns of the potential of pandemic, cut their targeted Fed Funds Rate (the rate that one bank borrowers over-night reserves and funds from another bank) by 50 basis points (0.5 percent) to a range from 1.0 percent to 1.25 percent. This was the first time since 2008 that the Federal Open Market Committee cut rates at other than a previously scheduled meeting.

What we do know at this stage is that the Coronavirus has been minimal compared to the potential. The latest estimate for China, for example, has recorded 80,152 Coronavirus cases with 2,945 deaths https://www.worldometers.info/coronavirus/ When placed in perspective of the 1.41 billion estimated Chinese, the virus has had a microscopic impact at this point in time health wise.

Thinking as an appraiser, there are past events (akin to comparable sales) that may provide insight into the potential economic impact of the Coronavirus assuming it evolves in a similar format (a very bold assumption). Just like comparable sales where no two properties are alike, the same is true regarding the outcomes of these type of events. Three past events are examined including two pandemics and the terrorist attack of 2001.

Six economic and real estate variables are viewed with a focus on how much these factors fluctuated compared to the year prior and following either the pandemic or seismic event. The key metrics examined include:

Data are examined in the following graphs and presented at an annual resolution so the more volatile monthly moves are not as visible – just longer term changes. In addition to the impact from the event, a myriad of other forces were in play. A recession was already underway in 2001 due to the implosion of the dot com businesses. The 9-11 attacks just prolonged that economic downturn. In 2008 the subprime-mortgage driven housing bubble burst resulted in the worst recession seen since the Great Depression. When reading about the Great Recession of 2008-2009, no mention is typically given to the H1N1 Virus (Swine Flu) that in 2009 infected 60.8 million, hospitalized 274,304 and resulted in the deaths of 12,469 in the U.S. alone according to the Centers for Disease Control and Prevention.

The first graph shows the trending of the annual average 30-year mortgage rate from 2000 through 2019. The underlying data were based on Freddie Mac’s weekly Primary Mortgage Market Survey, annualized by the St Louis Federal Reserve’s FRED data series (Federal Reserve Economic Data). Rates were falling prior to the 9-11 attack in 2001, the SARS episode in 2000 and the H1N1 spread in 2009. In each of these events rates essentially continued on the same path the year following. This is not to say that rates were not impacted by these events. This graph, however, would not necessarily lead one to the conclusion that these events impacted interest rates. I do believe that the Fed Funds Rate cut will, however, see a further decline in residential mortgage rates and continue fueling the refinance wave of the past 14 months. The weekly MBA Mortgage Application Index released today showed residential refinance volume jumped 26 percent from the prior week.

I doubt rates would have declined further in 2020 had it not been for the Coronavirus. Regardless of the cause, the U.S. 10-Year Treasury Bill is now trading at an all-time record low yield of less than 1 percent as global investors pursue a flight to quality and low risk. Lower rates will benefit pending homebuyers and those that can benefit from refinancing higher-rate mortgages, but will hurt savers with lower yields. 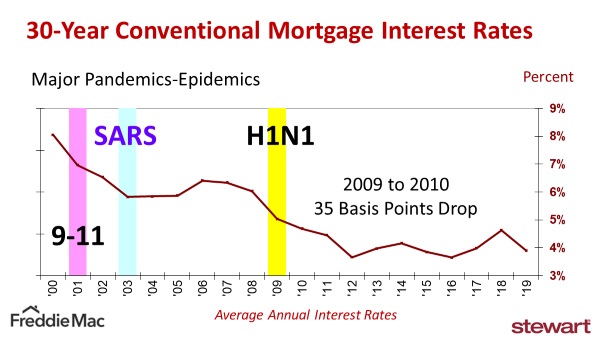 The next graph shows the same events time-lined against the annual average unemployment rate. Data consist of the monthly unemployment rate as reported by the Bureau of Labor Statistics, aggregated to an annual rate by the St Louis Federal Reserve’s FRED series. Without additional data, it is impossible to isolate the complete impact of the event on unemployment alone. While unemployment accelerated in 2009 (the year of H1N1), it had risen significantly in 2008 due to the ongoing U.S. recession caused by the implosion of the housing bubble. 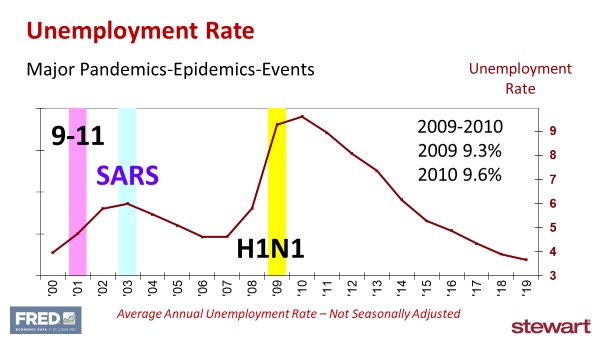 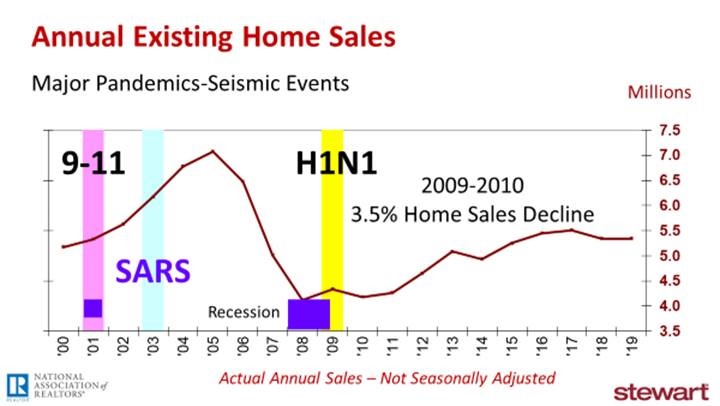 The annual average of the monthly median home prices for existing home sales as reported by NAR sales are shown in the graph. Other that scale it is very similar to home sales numbers. 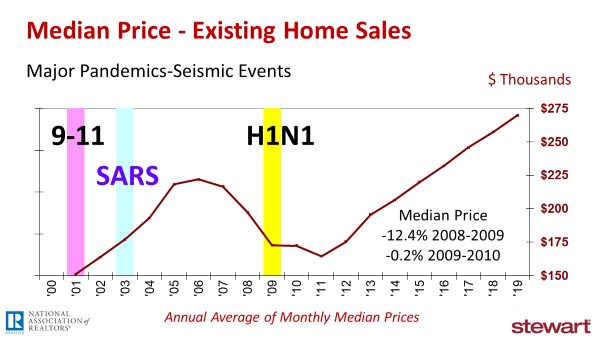 U.S. Commercial real estate sales volumes showed no noticeable impact from either the 9-11 attacks or SARS. The massive 88 percent decline from the all-time record commercial real estate sales in 2007 to 2009 was not a function of the H1N1 Virus, but rather attributable to the existing recession which saw almost no lending liquidity available for either commercial purchases or refinances. These data are from Real Capital Analytics and include all sales commercial individual property sales or portfolio transactions from $2.5 million and up. 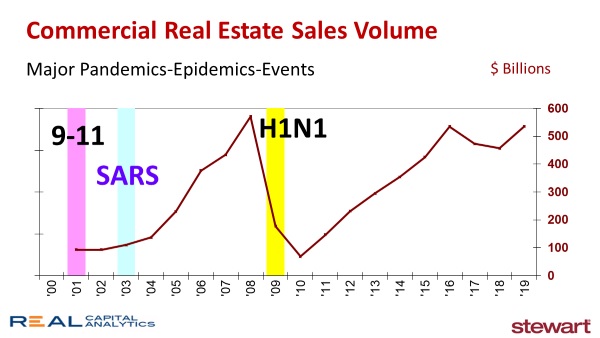 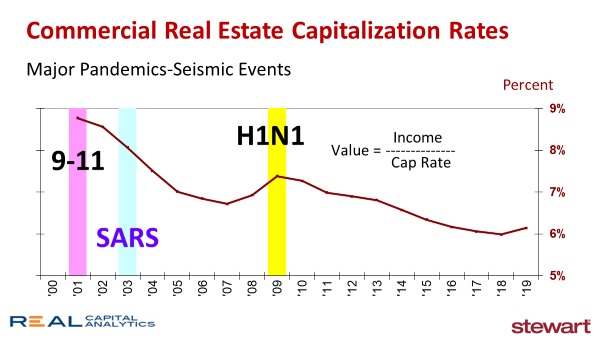 No major impacts were seen in these six variables attributable exclusively the three events. The pandemic or seismic event probably magnified or extended the trends of the time, but the total changes from the prior and the following year could not solely be attributed to the event. Hopefully that is same result for the Coronavirus.

An overview from the DCD of the H1N1 Virus can be read at https://www.cdc.gov/flu/pandemic-resources/2009-h1n1-pandemic.html

Yesterday while flying back to Houston from Minneapolis after a speech, the airports were much more vacant than normal, indicating that people already were reducing their economic activity despite a very limited outbreak of the Coronavirus. People’s actions are no doubt slowing the economy regardless of the current limited spread and incidence of the Coronavirus.

Hopefully the expected infection rate of the Coronavirus is not realized in the U.S. or globally.