Incidence of Coronavirus by State - May 2020

24/7 Wall Street released a study detailing Coronavirus by states as of May 18, 2020. Coronavirus data were reported on an incidence per 100,000 people allowing comparisons of states with different populations and densities. The distribution of these cases in the U.S., however, is not equal across the country. The first Stewart blog more than a decade ago included the TINSTAANREM axiom — There Is No Such Thing As A National Real Estate Market. That also applies to the incidence and impact of the Coronavirus. Just like real estate and the economy, locality rules.

The first table shows the number of Confirmed Cases per 100,000, by state, ranked from most to least. New York with almost 1,800 cases has had an infection rate that is 40 times greater than Montana, with the least at 44 cases per 100,000 people. 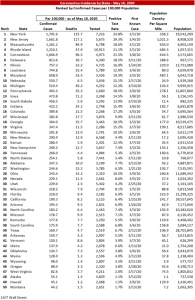 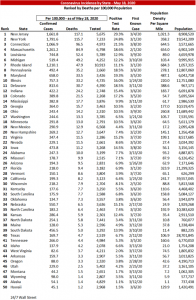 Unexpected (to me) in the 10 states with the greatest death rate was the absence of the five states having the oldest median age. Age alone is not responsible for the greater loss rate. 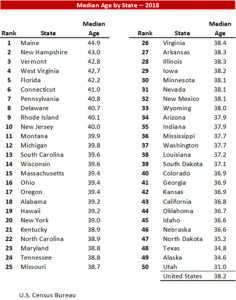 The next two tables show Coronavirus Testing (expressed as the number tested per 100,000 population) and the Percent of Positive Tests. Rhode Island is the only state with 10 percent of the total population tested coming in at 10,913 tests per 100,000 people. Just 11.1 percent of those tested came back as positive. In comparison, Florida has tested just one-third of that number (3,182 tests per 100,000) with a 6.9 percent positive rate. 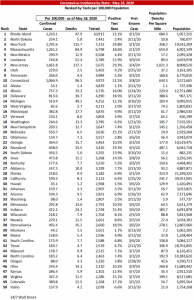 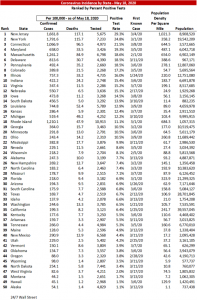 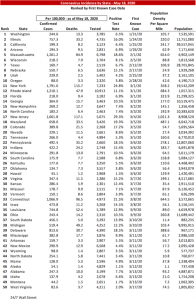 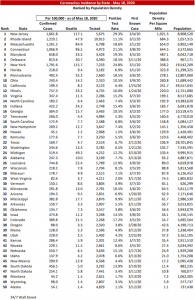 The next table shows all metrics sorted alphabetically by state for ease of review. 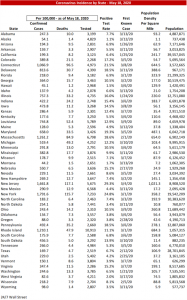 To get numbers out of the way, so-to-speak, the last table shows the relative rank of each of the metrics, each sorted from largest to smallest or oldest to newest. Comparing ranks gives a method to view the big picture without the individual numbers getting in the way, akin to the statement, “Can’t see the forest for the trees.” Alabama, for example, ranks middle of the pack for all ranks except First Known Case, where it came in as the fourth to last-state to have a confirmed coronavirus case on March 13, 2020, almost two months after the first confirmed case in Washington on January 21, 2020. 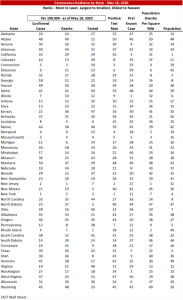 My one forecast is that in some high-density, high-rate of contagion markets, there will be an accelerated out-migration as people pursue perceived lower infection locales.