The blaring, flashing neon-bright, bad-news statistic in the U.S. April jobs report was the loss of one-in-every two jobs (47.2 percent) in the Leisure & Hospitality segment in the prior 12-months as reported by the Bureau of Labor Statistics (BLS). Jobs losses in each of the SuperSegments (as defined by the BLS) are shown in the following table (with a full summary available in the prior Stewart Blog at http://blog.stewart.com/stewart/2020/05/22/april-2020-jobs-report-ugliest-in-our-lives-with-more-to-come/ ) April job losses accounted for almost all of the decline in the past 12 months, making up 46.8 percent of total loss in Leisure & Hospitality jobs alone. 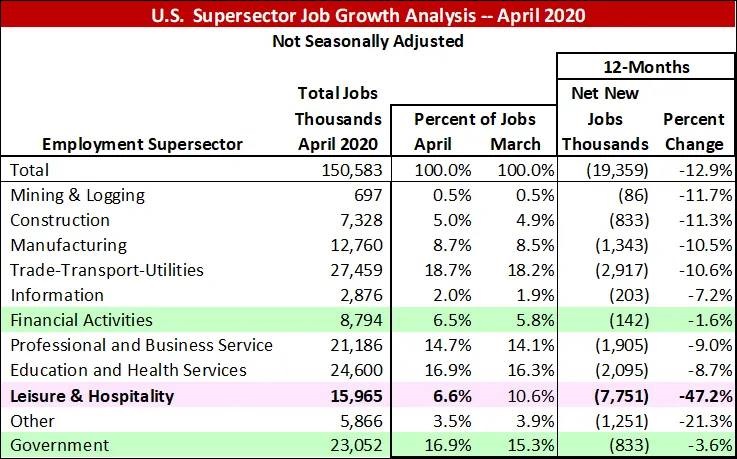 Those metros with greater percentages of Leisure and Hospitality jobs will likely have the largest comparative loss of jobs due to Coronavirus. The prevalence of Leisure & Hospitality (L&H) jobs varies significantly across U.S. metros and also within some markets depending on seasonality. As usual, I invoke the TINSTAANREM axiom — There Is No Such Thing As A National Real Estate Market. Ditto the number and percentage of L&H jobs across metros and, for some, by month.

The following data were analyzed and metrics calculated for each individual Metropolitan Statistical Area (MSA) and Division for which data are reported by the BLS. For illustration purposes, the New York-Newark-Jersey City MSA data are shown below (the most populous MSA in the country having the greatest number of jobs). Specific details for each metric:

The impact of seasonal tourism across the comparative percentages can be seen by month, with L&H employment as a percentage of total jobs greatest in June-July-August and the least in January-February-March for the New York-Newark-Jersey City MSA

The lowest month of L&H jobs in the MSA as a percentage of total employment was 9.0 percent in March, peaking at 10 percent in both July and August

The Coefficient of Variation statistic (C.V.) is a standardized unitless measure of dispersion and shows how variable or uniform a data series. It is calculated by dividing the standard deviation by the mean of monthly L&H jobs. This statistic is utilized to identify those metros with the greatest seasonality of employment in certain months and those with the least changes in L&H employment across the year. The hypothesis is that those markets with the highest C.V. will likely have the greatest percentage of job losses in high season. 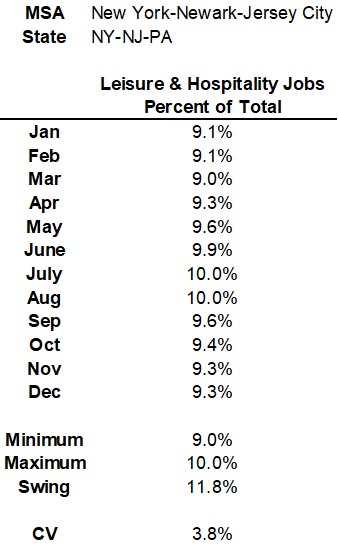 To illustrate the difference between metros with lower and high seasonality, the following adds Glens Falls, New York statistics to the table above. While the New York-Newark-Jersey City MSA had a C.V. of 3.8 percent, Glen Falls registered a 26.1 percent C.V. due to the larger differences between June-July-August highs and November-December-January-February-March lows. 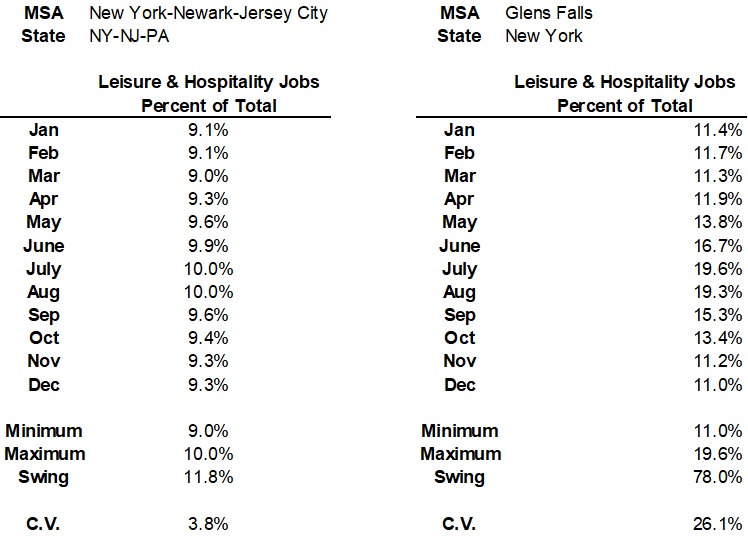 Cities with the greatest peak month percentage L&H employment are shown in the following table along with the respective C.V. statistics. The greater the C.V. statistic, the greater the seasonal change in L&H employment. Ocean City, New Jersey had the top peak percentage of L&H employment in country at 39.1 percent (July). The corresponding C.V. statistic at 43.7 percent which indicates significant L&H seasonality, with the job sector troughing in March at 19.7 percent. In contrast, the Las Vegas MSA came in 4th most L&H percentage employment with a 28.8 percent peak month (both June and July) but troughed at a close 27.8 percent (November and December). Across the board, these metros can be defined as tourist and/or seasonal-living destinations. 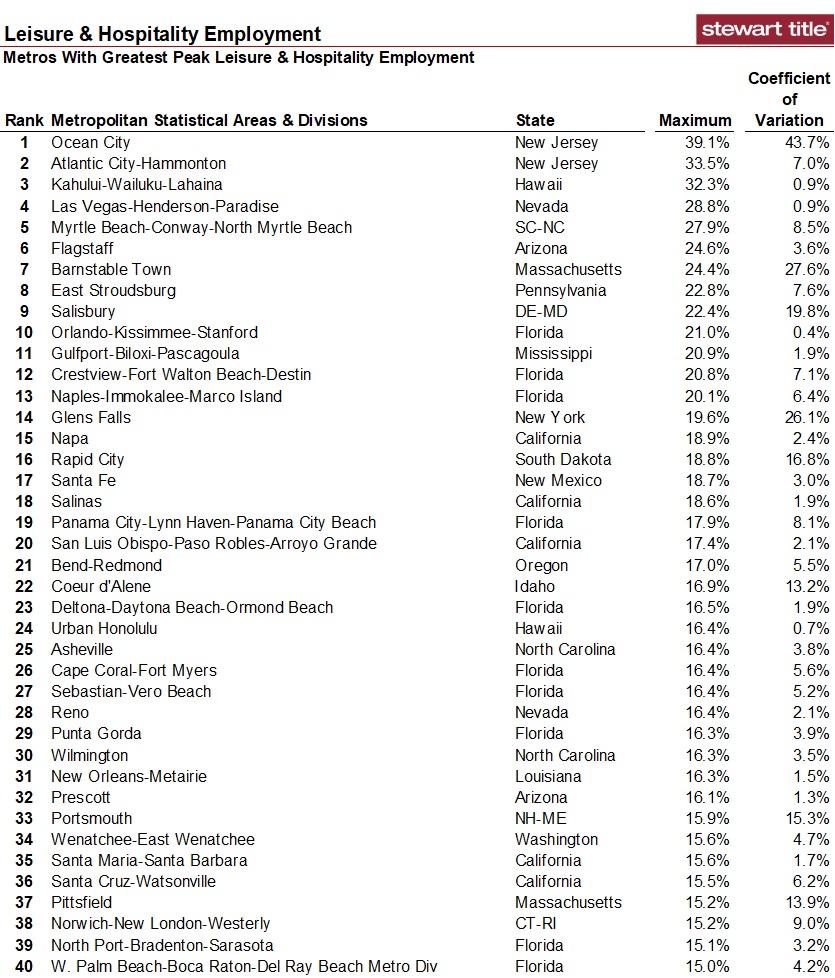 Metros with the lowest individual monthly percentage of L&H employment are shown in the next table. Sheboygan, Wisconsin, despite having a trough of 7.1 percent L&H employment, still posted a C.V. statistic indicating a high L&H seasonality level. 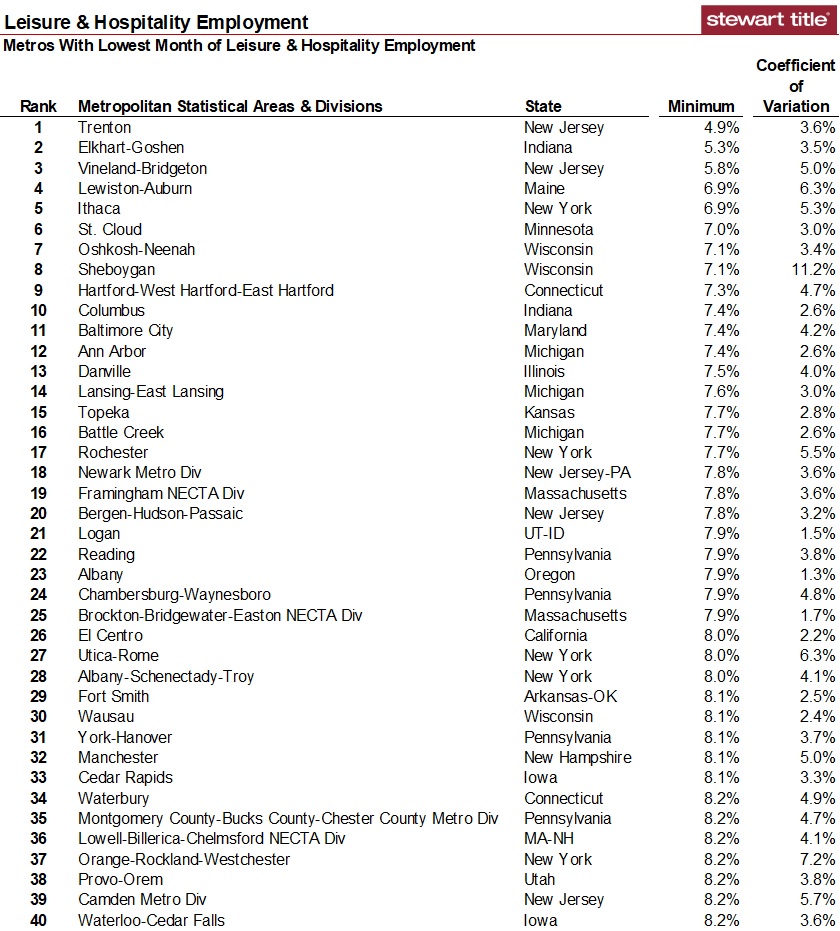 Metros having the most and least L&H seasonality (as indicated by C.V.) are shown in the next two tables. The group with the greatest C.V.s are typically smaller metros with more tourism in seasonal months. 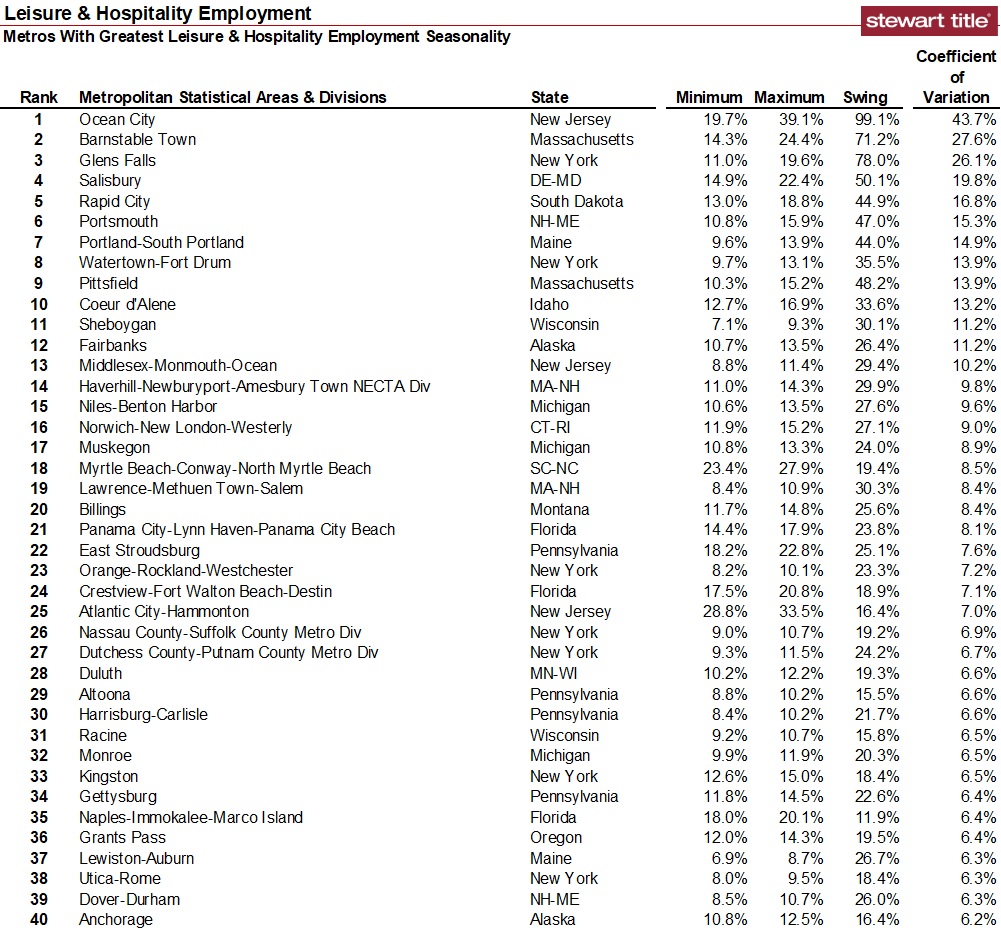 The group with the least seasonality includes some tourist destinations and larger cities. While one-in-five jobs in the Orlando MSA are in L&H (double that of the U.S.), these vary little from one month to the next. 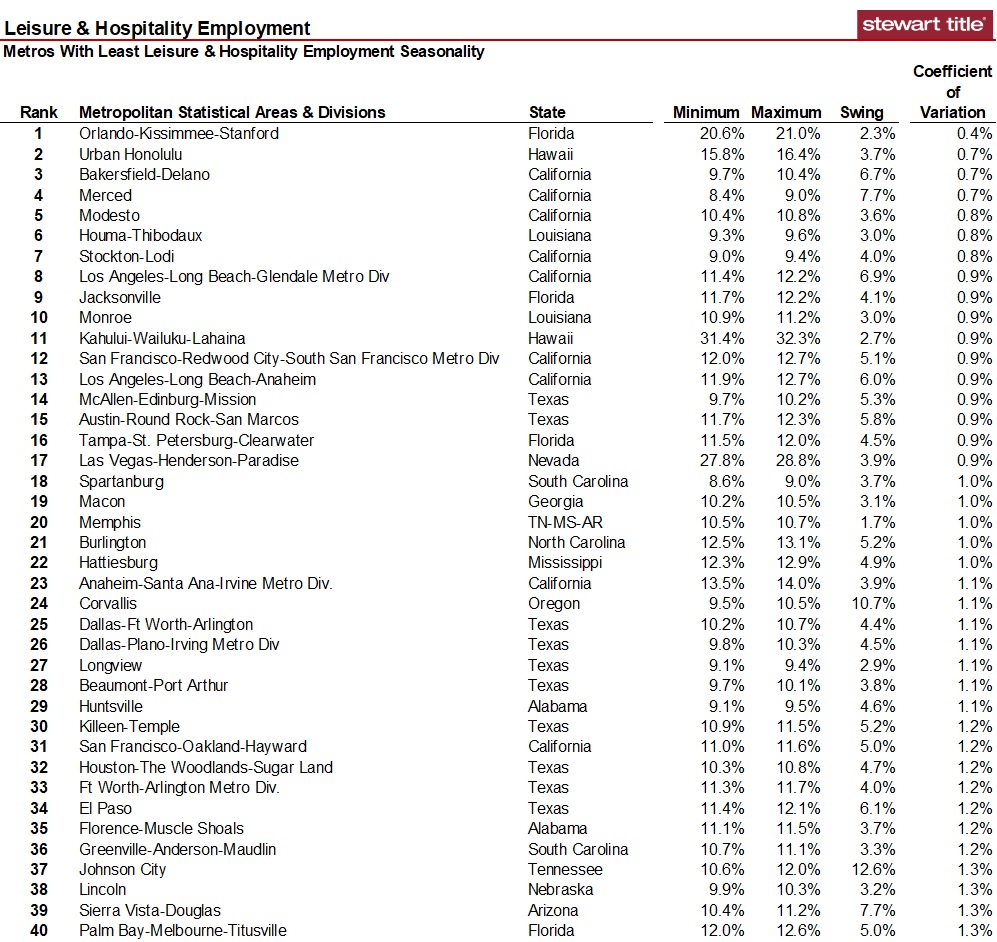 The last table shows the 40 metros with the greatest seasonality (largest C.V. statistic) highlighting the months that exceed that market’s average percentage L&H jobs in the past year. While most markets show peak L&H employment during summer months, the Naples, Florida MSA troughs in those months. 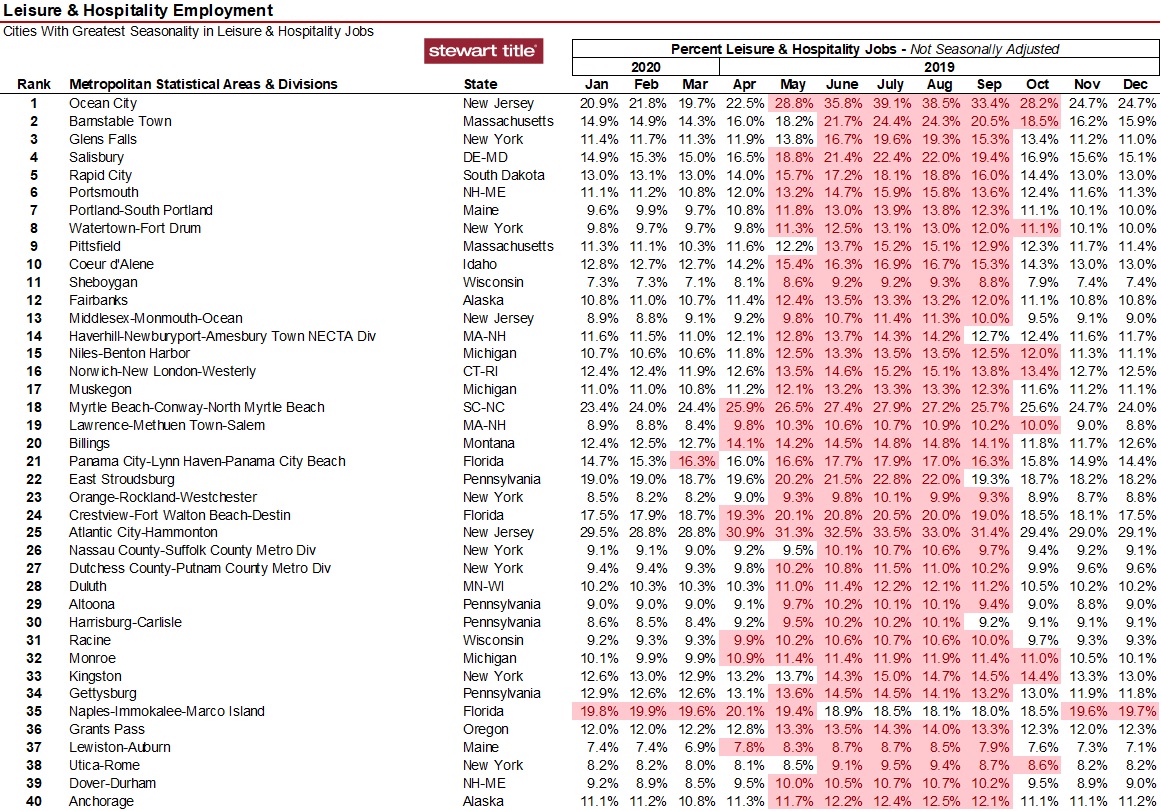 Metrics for all metros with data are shown in the attached PDF sorted alphabetically by state and MSA-Division.

To access the full NAICS Classification Manual click https://gumroad.com/l/2017-NAICS-Classification-Manual This details all jobs included in each of the respective sector codes. L&H jobs commence with a number 7.

For much of the L&H segment, this Coronavirus driven recession will not be over until we can sit on a crowded airplane, walk into a packed elevator or attend a popular sporting event without concern. Expect ongoing erosion in L&H jobs in the next few months – particularly those markets usually accessed by planes versus autos.