As students head off to college in the months to come – both in person and online digitally – and for those that may need to retool due to permanent unemployment, the major of study selected may have a life-long impact. The college major is a base of knowledge, and for some, skill sets that may or may-not be in demand.

To identify the undergraduate majors with the lowest unemployment rates, 24/7 Wall Street examined the findings of the U.S. Census Bureau’s 2018 American Community Survey, focusing on the respective unemployment rates. In 2018, the average unemployment rate for all people in the workforce with a Bachelor’s degree was 2.6 percent, compared to a national average 3.9 percent for the entire workforce, as reported by FRED (Federal Reserve Economic Data from the St Louis Fed). 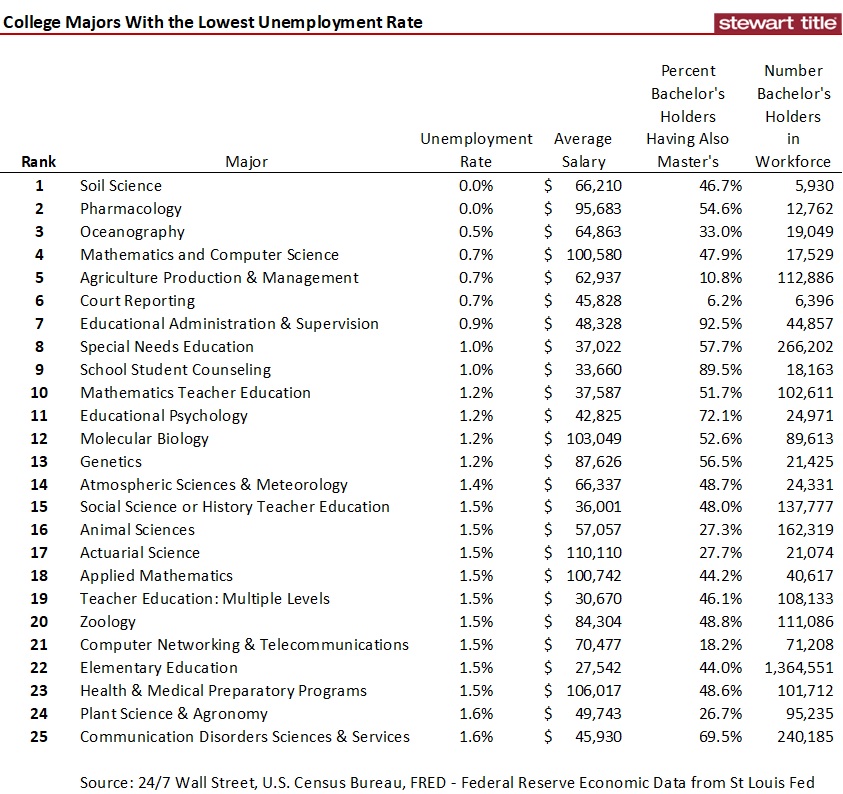 “What a person should study at college,” is the most frequently asked question I receive each month. Whether it is for a child, nephew, niece, or grandkid, people are genuinely concerned about the economic future of others. The mere selection of an undergraduate major in no way assures success or ongoing employment. More important than which specific majors yield the lowest unemployment rates, other factors should include the quality of life, the potential number of various jobs for which an individual would be qualified along with income.

While there is no one single major that will position a person for success, failure to have specific knowledge and skill sets will limit a person’s future.  Key to keeping most options available is an education in the STEM courses: Science, Technology-Engineering and Mathematics. My advice to everyone asking what the major should be is to be certain to take all of the mathematics and sciences available in high school to keep options open and broad for future education in technical, vocational and academic-oriented studies.

For any business major, accounting is one of the core-critical studies. While a person may think they want to work in business in general, the ability to understand a balance sheet or income statement is mission critical.

For most individuals, I believe that the undergraduate degree is indeed a ticket to the next opportunity. For many however, college is not the best economic or lifestyle solution as technical and vocational skills are often more in demand.

Take another look at the table above. Within the 25 college majors, everyone of the majors in the top-five average income group have a math education prerequisite. Think STEM.