New findings from the U.S. Census Bureau found that 9.8 percent of Americans moved in 2019, making up almost 31 million people. That was prior to the outbreak of the Coronavirus. Given an average 2.3 people per household, this equates to 15.3 million moves of which 3 million are interstate.

Where people moved from and to, however, was not equally distributed. Once again the TINSTAANREM axiom is invoked — There Is No Such Thing As A National Real Estate Market or economy.  Nor do households move away from a city in equal rates or for the same reasons. There is a vast array of explanations for departing a city, including a new spouse or significant other to searching for a new job. Departures, however, are often driven by the lack of jobs. Moving is not a cheap adventure. The American Moving and Storage Association estimates that the average cost of an interstate move was $4,300 (and averaged 1,225 miles) with the typical intrastate move cost $2,300. The typical move (intrastate and interstate) involves approximately 7,400 pounds of goods.

To identify where households were departing in the greatest numbers, 24/7 Wall Street focused on the percentage of population decline due to migration from 2010 to 2019 using data from the Census Bureau’s Population Estimates Program.

The following table shows the 25 Metropolitan Statistical Areas (MSAs) with the greatest decline in population due to migration. Statistics also included were the Overall Population Change from 2010-2019, Percent Change in Employed Population from 2010-2019 and the estimated 2019 Population. These were all mid-sized or smaller cities, with an average population just less than 180,000. Only three of the MSAs exceeded 400,000 total population: Brownsville-Harlingen, Texas at 423,163; Flint, Michigan at 405,813; and Peoria, Illinois at 400,561. For comparison purposes, the average size among the 384 MSAs in the U.S. was 736,532 in 2019. 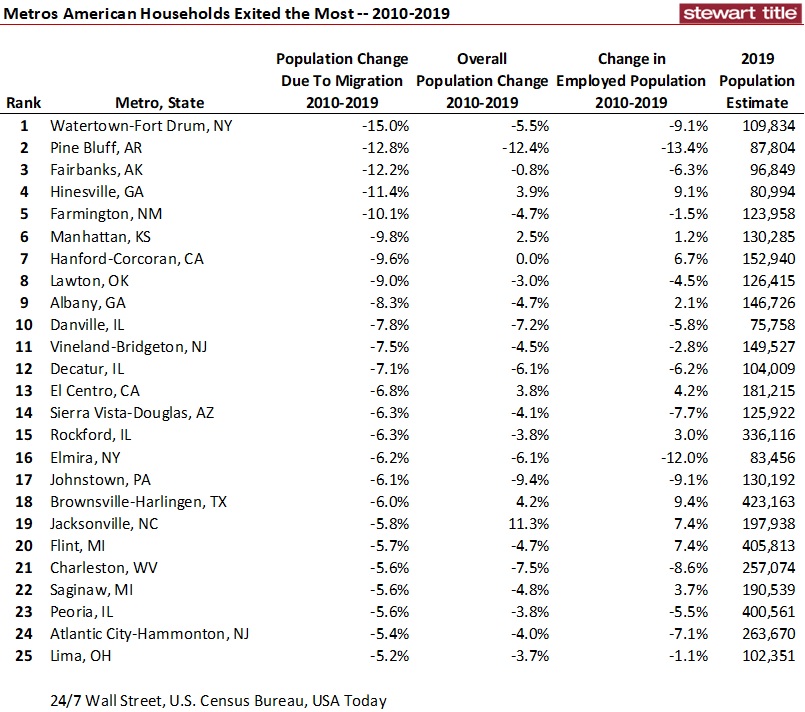 To read the entire article from USA Today click https://www.usatoday.com/story/money/2020/08/04/cities-americans-are-abandoning-for-new-jobs-careers/112604384/

Migration patterns have being going on for decades, with the Northeast and Rust-Belt populous pursuing jobs elsewhere.  The tax law changes in 2018 no doubt accelerated household moves, and that will change again given Coronavirus.