Existing home sales rose to the best level seen since December 2006, coming in at 6.00 million closings on a Seasonally Adjusted Annualized Rate (SAAR) according the National Association of Realtors® (NAR). Sales on a SAAR were up 10.5 percent compared to one year ago and up 2.4 percent sequentially vs July. Total monthly raw sales rose 5.5 percent year-over-year to 561,000 in August. Sales include single family, condominiums and co-ops. Median price jumped to an all-time record $310,600 versus $278,800 one year ago for -- a gain of 11.4 percent.

Sales and median prices are shown in the following two graphs.Each show median prices, with the first using the SAAR of home sales and the second the total number of sales in the prior 12-months (raw monthly sales summed). 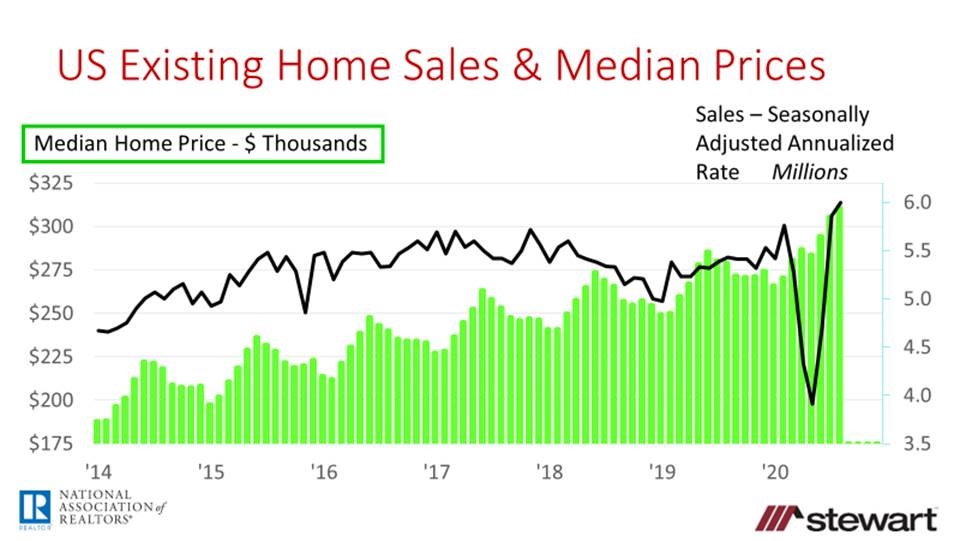 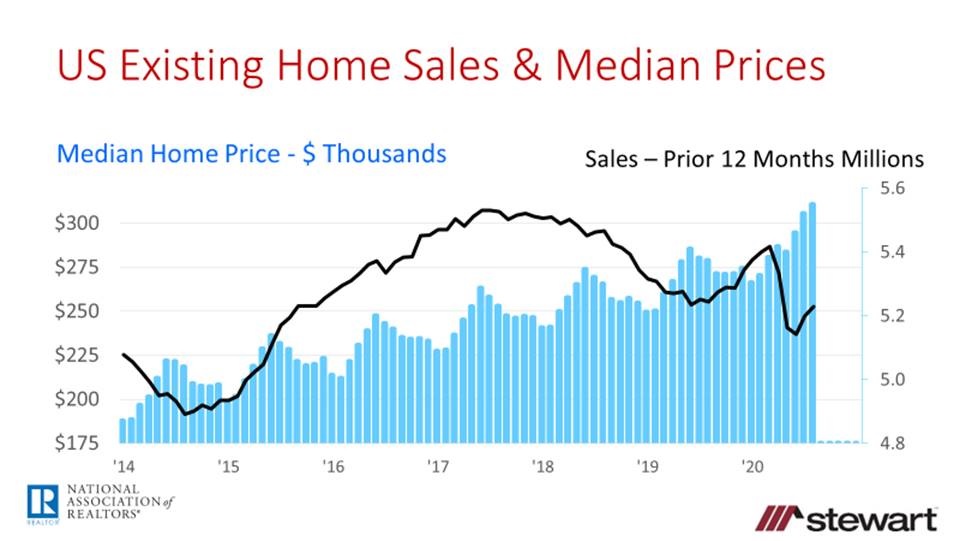 The next series of graphs show total sales, single-family sales, and combined condo & co-op sales monthly (raw unadjusted) commencing in January 2018. Though total monthly sales were down 3.2 percent year-to-date,  for the month of August they were up 5.5 percent compared to one year ago. 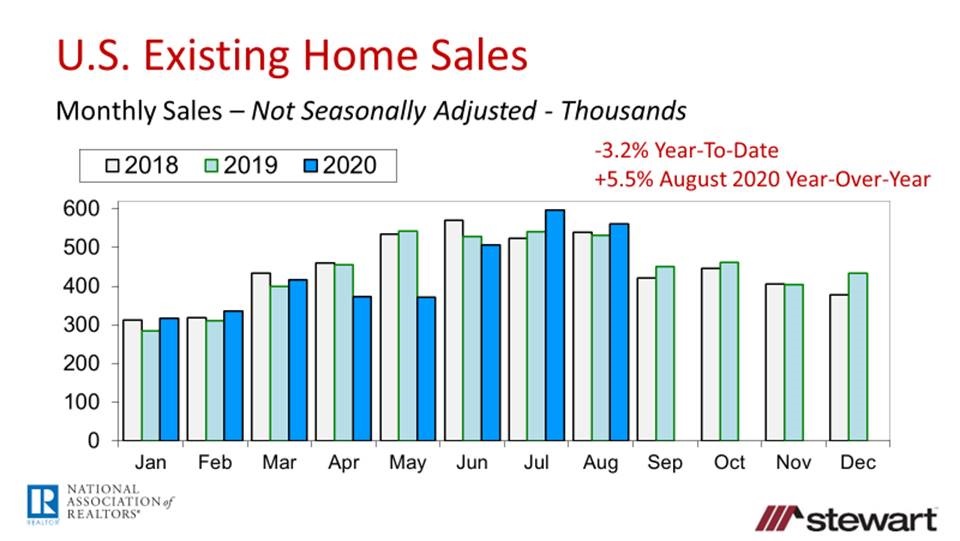 Single-family sales were down just 2.1 percent year-to-date after falling behind 2019 from April through June, but rose 5.7 percent in August compared to one-year ago. 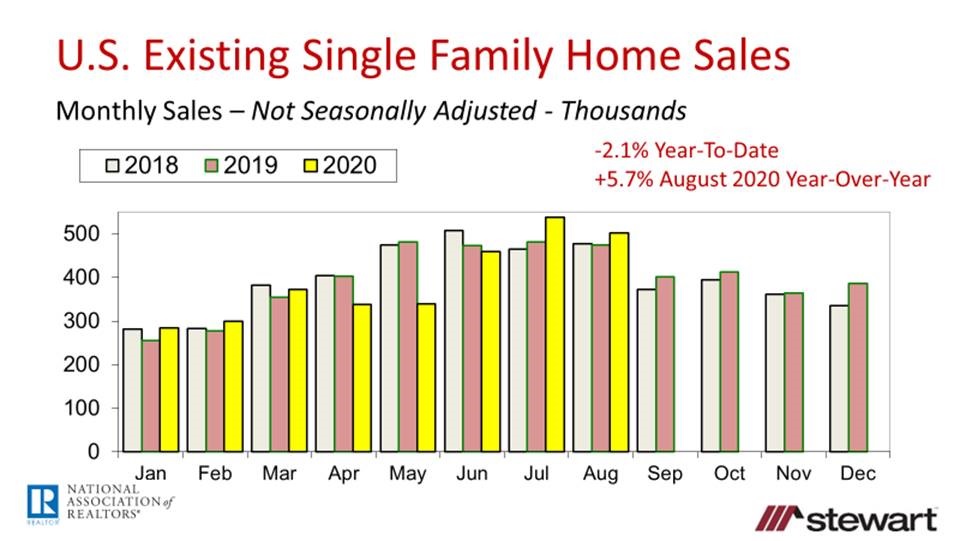 Condo & co-op sales lagged from March through June and were down 12.2 percent year-to-date but up 3.5 percent for the month of August. The initial outbreak of Coronavirus included unknowns in the communicability and severity of infection, resulting in what now appears as a temporary drop in the desirability of  more-dense multifamily-type properties. 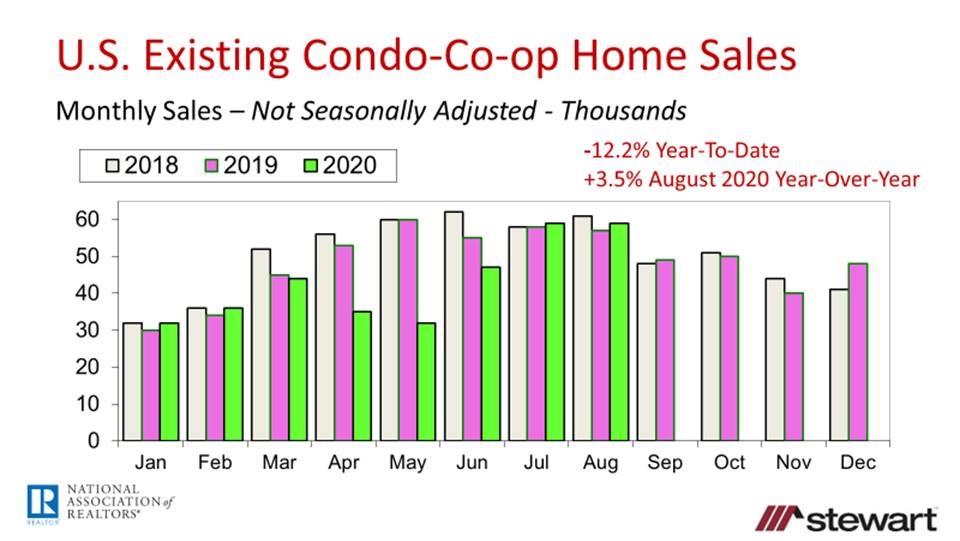 NAR also completes a sample (not seasonally adjusted) regarding the percentage change in single-family sales and inventory from one year ago, and distribution of sales by price range. The following tables shows these metrics on a national basis as of August 2020. Inventory declined in every price range on a year-over-year basis.  Sales rose in all price ranges from $250,000 and up but fell in those less than the one-quarter million dollar level. The greatest year-over-year increase in sales was in the $1 million plus range, up 44 percent from a year ago, with the $750,000 to $1 million segment up 34.5 percent 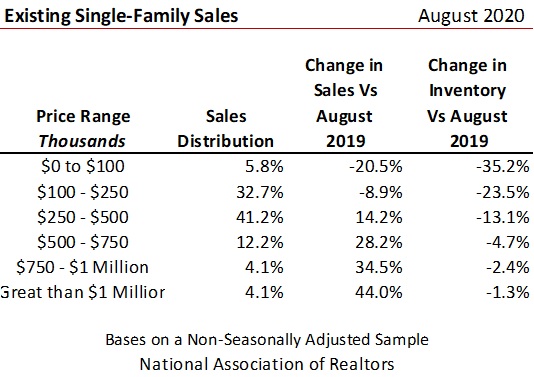 Home sales and refinance lending remain the bright spots in an otherwise beleaguered economy. While low interest rates have aided affordability, the pandemic has made the home greater in intrinsic value as more time has been spent there than any period in people’s lives, impacting the occupants quality of life. This will no doubt recede somewhat when either a vaccine or therapeutic become available and people spend more time outside the home.

As Dorothy said three times in the Wizard of Oz, “There is no place like home.” That remains especially true today in our pandemic-shaped world and is equating to strong housing sales.  At least for now. A material surge in layoffs or a double-dip recession would change that, however.