One positive from the 2020 pandemic is that the U.S. savings rate hit an all-time record high last year, at least among those that did not lose their jobs or had a cut in hours worked.  While the U.S. personal savings rate averaged 8.8 percent monthly from 1959 through 2019, the average in 2020 was more than double at 17.7 percent. Those still employed and stuck at home simply did not buy as much. People that lost their jobs had to live off of savings, stimulus and unemployment benefits – until they ran out.

The table shows average savings for decade-long and other periods monthly since 1959.   Data for 2020 are just for the 12 months of the year.

The graph below shows monthly savings rates and recessions since 1972. Savings rates do rise and fall significantly outside of recessionary periods. Savings went from 8.5 percent in March 1987 to 4.5 percent as of April, jumping back to 8.2 percent in May. Examination of U.S. economic and global issues give no insight into this puzzling change.   Savings rates again abruptly moved from 12.0 percent in December 2012, then almost halved to 6.3 percent in January 2013 prior to resuming a generally upward tract. This change was attributed to the pending 3.8 percent Affordable Care Act Tax increase that was taking effect in 2013, seeing many investors sell assets in 2012 that otherwise would have been taxed at greater rates the next year. This same phenomena may be seen again if the Biden Administration either eliminates capital gains taxes or raises them substantially (a stated administration intend during the run for Presidency) assuming that investors know of the tax increase a tax-year in advance. If the tax increase were made retroactively, then the dip would not likely to be as prevalent. 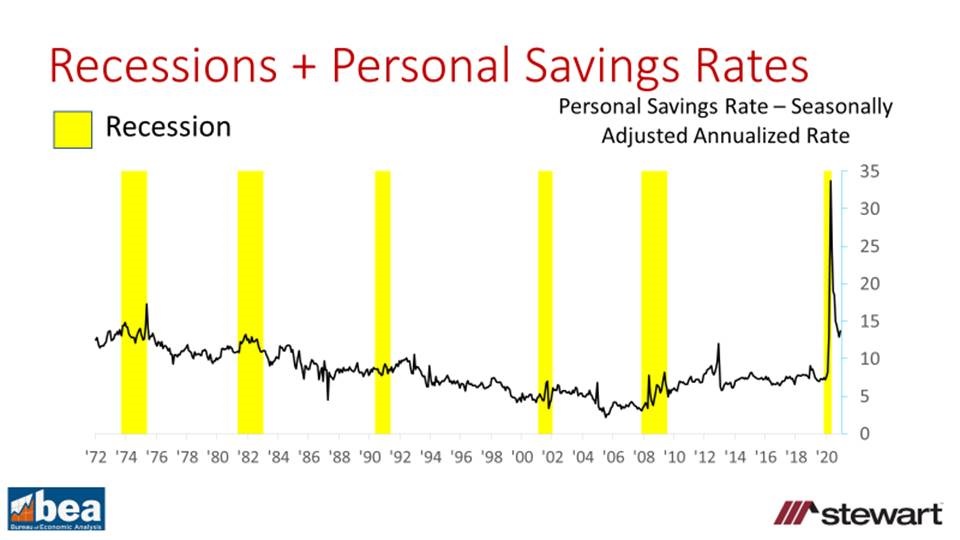 Personal savings rates and 10-year constant-maturity Treasury Note yields for the past six years are shown in the next graph. Treasury rate yields were relatively static from 2014 through 2019. Treasury yields remained somewhat stable as savings rates rose from 8.3 percent in February 2020 (pre-pandemic) to 12.9 percent in March 2020, skyrocketed to 33.7 percent in April (the all-time record), slide back to 24.7 percent in May and then dropped to 19.0 percent in June.  Since 1959, the Personal Savings Rate was double digits or greater (10 percent and above) 41.0 percent of the time. 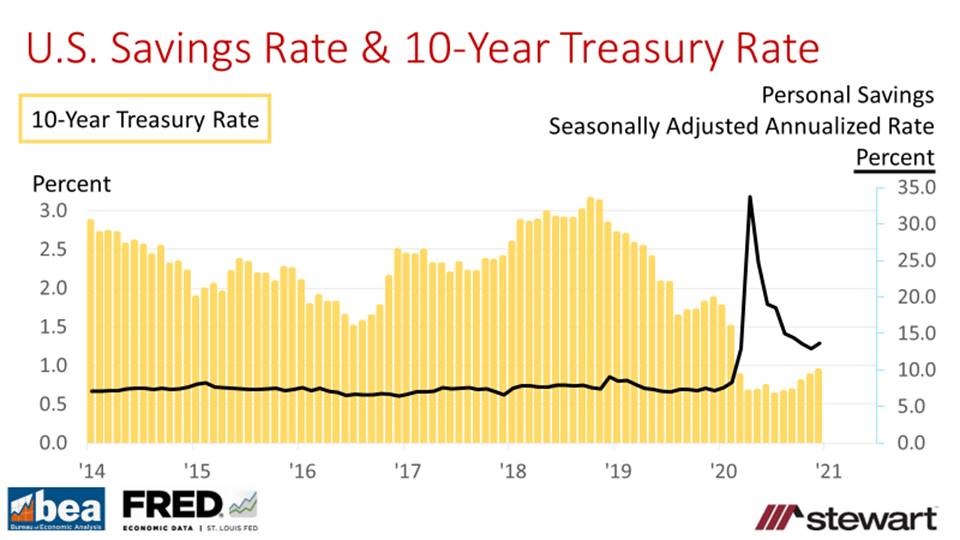 Savings is important to those looking to buy their first home. One of the major limiting factors for prospective first-time homebuyers is the challenge in saving up the down payment.   Just because a person saves, however, does not necessarily equate to funds readily available for a home down payment. Most financial advisers say never touch an emergency fund for anything other than an emergency.

Savings placed into  tax-advantaged retirement accounts are not as readily accessible for down payments either, but can be accessed by either borrowing from the account (for which full repayment plus interest must be made) or taking an actual withdrawal (which may incur penalties and taxes due). While both IRA and Roth accounts allow for most individuals to borrow up to $10,000 tax-free for use as a down payment, doing so at a younger age can materially impact potential retirement funds due to the time-value-of-money. Always seek professional advice regarding withdrawals or loans from tax-deferred savings and investment accounts.

The increased 2020 savings rate adds to the explanation of strong 2020 housing sales and surging investments in stock market equities. People have the cash on-hand to do so.

Do not expect the savings rate to hold as more people become vaccinated or are added to herd immunity. After being restricted in travel and buying activities for more than one year, robust spending should drive the U.S. economy strongly in mid- to later-2021 and the savings rate should drop, just like an outgoing tide. This assumes mutations to the virus are contained within vaccine options.

Among those able to maintain employment and comparative income levels, 2020 was an opportune time to enhance retirement savings. Those that lost their jobs, however, had to access retirement savings, and unfortunately in many circumstances, have depleted those assets.