Incomes and poverty rates vary across the U.S., with some states better off while others struggle. Once again the  TINSTAANREM Axiom is invoked — There Is No Such Thing As A National Real Estate Market or economy.  Nor is the typical household income similar across states. To present and discuss the disparity of incomes in the U.S., 24/7 Wall Street gathered a series of data for all 50 states to help identify the richest and poorest along with associated economic and demographic metrics. All data were sourced from the U.S. Census Bureau’s 2019 American Community Survey. Data in the 24/7 Wall Street analysis included:

Assuming agreement with 24/7 Wall Street’s methodology predicated on median household income by state as the lone determinant, states are ranked from richest to poorest in the following table along with the other metrics. Given the U.S. median income of $62,860 in 2019, Maryland’s median income was 138.0 percent of U.S. median household Income, while Mississippi’s was 72.8 percent at the bottom of the spectrum. 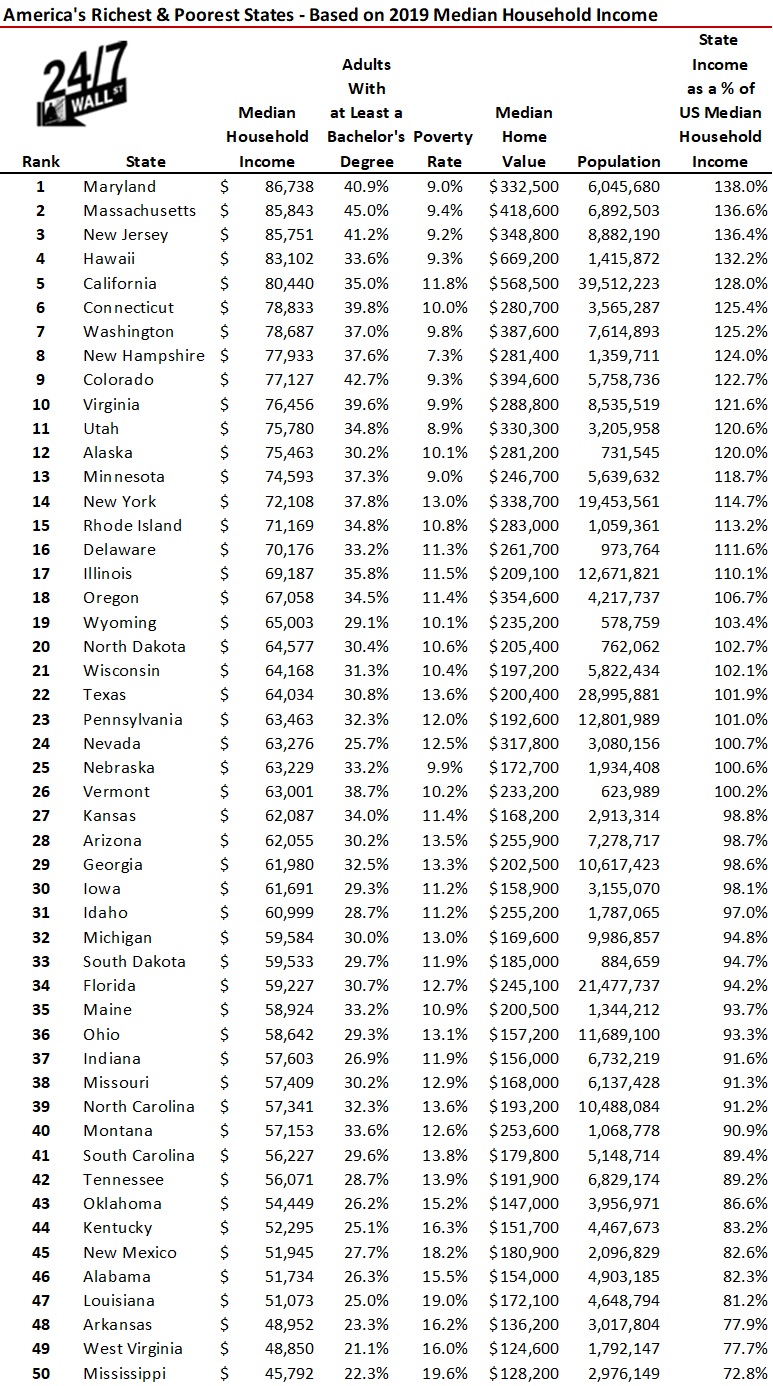 My opinion is that ranking relative prosperity using median income is misleading given the material differences in cost of living across the states. Fortunately, the World Population Review provides a state-by-state comparative cost of living index. Their Index is based on the percentage difference in cost of living in the state versus the national average. The Index looks at the amount of money needed to sustain a certain standard of living by affording basic needs including housing (median rent for a 2-bedroom apartment), food, healthcare and others costs. To normalize and compare incomes, state median household income is divided by the index yielding a comparative cost-of-living adjusted household income. These are detailed in the next table. This outcome is dramatically different than the original methodology utilized by 24/7 Wall Street. Now, the states perceived as the richest (after consideration for the respective cost of living) are Utah, Virginia, Minnesota, Illinois and Colorado. The poorest include Hawaii, Oregon, Maine, California and New York.

To read the entire 24/7 Wall Street article click America’s Richest and Poorest States – 24/7 Wall St. (247wallst.com) For insight and details on the World Population comparative cost of living index click https://worldpopulationreview.com/en/state-rankings/cost-of-living-index-by-state It is my opinion that the 24/7 Wall Street study was a poor methodology to gauge the Richest and Poorest States in America. Adjusting for the comparative cost of living more likely reflects overall quality of life rather than just income.  Still, there is a wide divergence in household median after adjusting for the cost of living.  Even better would be to included typical taxes paid by median household incomes.