Existing home sales stumbled for the third month in a row, sinking from 6.01 million sales on a seasonally adjusted annualized rate (SAAR) in March of this year to 5.85 million in April, down 2.7 percent according to the National Association of Realtors® (NAR). The slip is attributed to limited inventory of listings available for sale in conjunction with strong demand. As a result, median existing home prices shot up 19.1 percent year-over-year to an all-time record $341,600. Average price jumped 13.6 percent to $364,800, also a record.

Existing home sales are shown from two different views in the following graphs with each including monthly median home prices. The first shows the SAAR of sales and the second is based on actual monthly closings (not seasonally adjusted), summed over the prior 12-months. 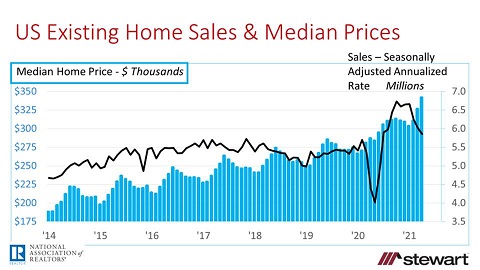 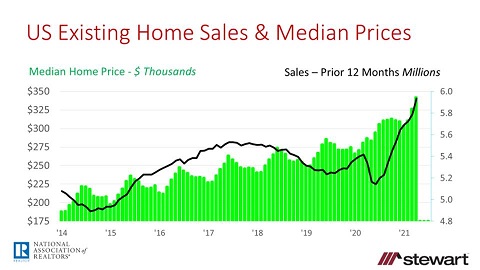 The bar chart shows monthly existing home sales (unadjusted) commencing in January 2019.  Home sales plunged last year in April and May at the full onset of the pandemic, making comparisons year-over-year somewhat meaningless. As people stayed at home, where they lived became a greater impact on the overall quality of their lives and lifestyle than anytime in modern history, driving the intrinsic value of housing to a generational peak. 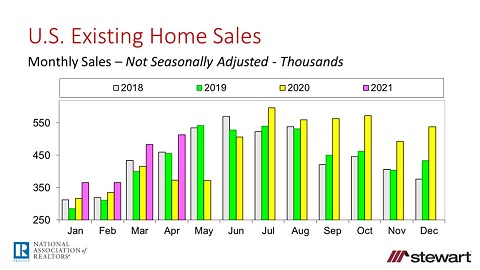 Consistent with the idea that housing has the greatest intrinsic value in our lifetimes is the more than tripling of the number of sales of homes closing for $1 million and up. Sales by price range are shown in the table based on a sample by NAR. The likely reason for the dip in sales priced less than $250,000 is a lack of inventory for sale. Just 5-years ago $1 million and up homes made up just 2.3 percent of all sales versus 6.4 percent today. 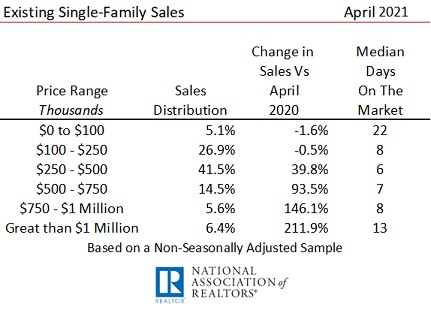 U.S. consumers have an estimated $2 trillion more money today in their banks accounts, pockets, billfolds and purses than 1-year ago. That is driving demand for everything – including homes at record prices. After all, it is all about supply and demand.