The combined cost of housing and transportation expenses accounted for one-half (49.8 percent) of all monthly household expenditures in 2019 (prior to the pandemic) according to the Annual Consumer Expenditures Study by the U.S. Census Bureau. Included in both of those are energy costs.  On a simple average across the 50 states, monthly energy costs make up 12.4 percent of combined housing and transportation costs, or 6.2 percent of total household expenditures. For some households, energy costs can consume up to 22 percent of total after-tax household income. Unfortunately these are typically the poorest Americans who can least afford these expenses.

Only three other expenditures (besides housing and transportation) account for a greater percentage of total household expenditures than the 6.2 percent of energy:

Respective energy costs to households include state and local taxes, the mix of energy sources used and amounts of energy consumed. The type, amounts and costs of energy vary significantly across the country. To rank typical residential energy costs, WalletHub compared monthly energy bills in all 50 states and the District of Columbia using this straight-forward equation:

WalletHub’s findings of average monthly state-specific energy costs are shown in the table, sorted from most to least expensive and include energy costs per source. In two-thirds of the states (66.7 percent), motor fuel costs exceed electricity expenses for the typical household. The lowest motor fuel monthly expenditure was in Washington, D.C. Governing.com reported that while 8.7 percent of U.S. households owned no vehicles in 2016, that rose to 37.3 percent in Washington, D.C. with lower vehicle ownership rates in only New York City (54.4 percent without a vehicle), Newark (40.3 percent) and Jersey City (40.1 percent). Across all 50 states and the District of Columbia, electricity expenses accounted for 40.1 percent of the monthly energy bill, natural gas 10.7 percent, motor fuel 45.6 percent and home heating oil 3.6 percent. Just 11 states had an average monthly home heating oil bill greater than $10, while only three states monthly natural gas bill was less than $10.

The next two tables show the average monthly electricity bills for the 10 most- and least-expensive states. Also shown are electricity costs as a percentage of the total energy bill. 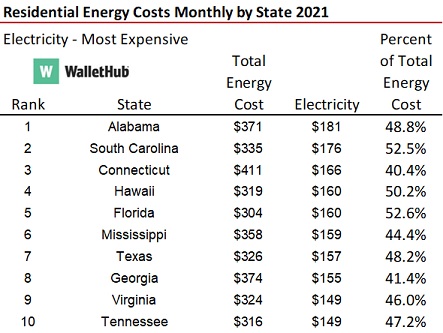 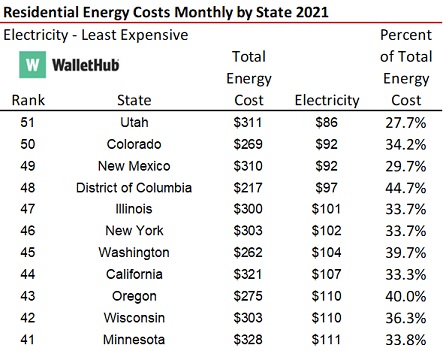 Associated with electricity costs includes the source of generation, with hydro-electricity the lowest cost. The next table shows the percentage of electricity generated within each state by source.  These data were obtained from the NEI – The Nuclear Energy Institute. 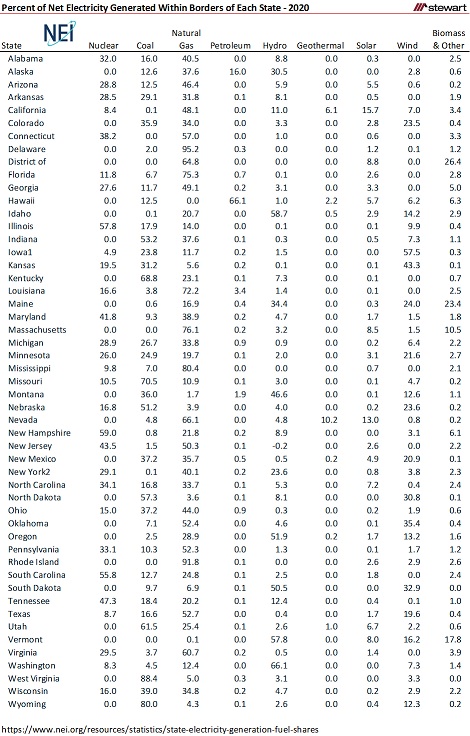 The last two tables list the 10 states each with the greatest and least average monthly motor-fuel bills. This will no-doubt change as sales of all-electric vehicles (EV) increase.  Total EV sales in the U.S. from 2010 to 2020 totaled slightly more than 1.4 million, compared to total light-weight vehicle sales in the period of 159.8 million. Thus, EV sales in the past decade made up 0.88 percent of total light-weight vehicle sales. California, however, is now accounting for approximately 50 percent of all new EV registrations. 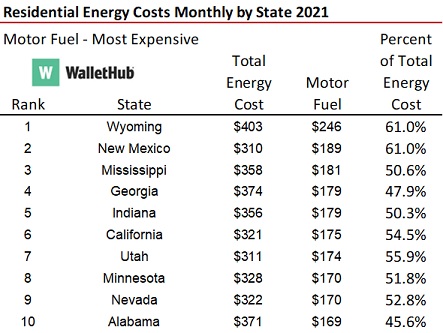 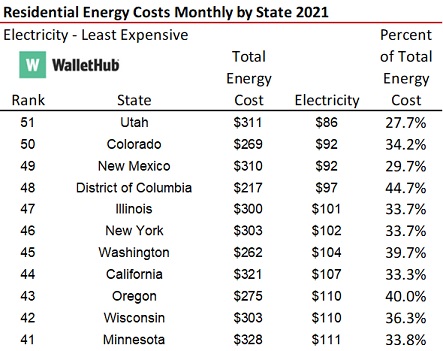 Access to the 2019 Annual Consumer Expenditures study from the Census Bureau can be viewed at  CONSUMER EXPENDITURES--2019 (bls.gov)

Energy costs are anticipated to rise 2.8 percent this year according to U.S. Energy Information Administration. If energy costs continue to rise at a significantly greater rate than incomes, then less of the total household incomes will be available for housing. As the U.S. is anticipated to move to renewable sources, it is imperative that the actual costs of energy in the future are included in that analysis and not just the hopeful outcomes.

If ever there was a time for intellectual honesty it is now regarding actual and not hoped-for costs and availability of energy in the future.