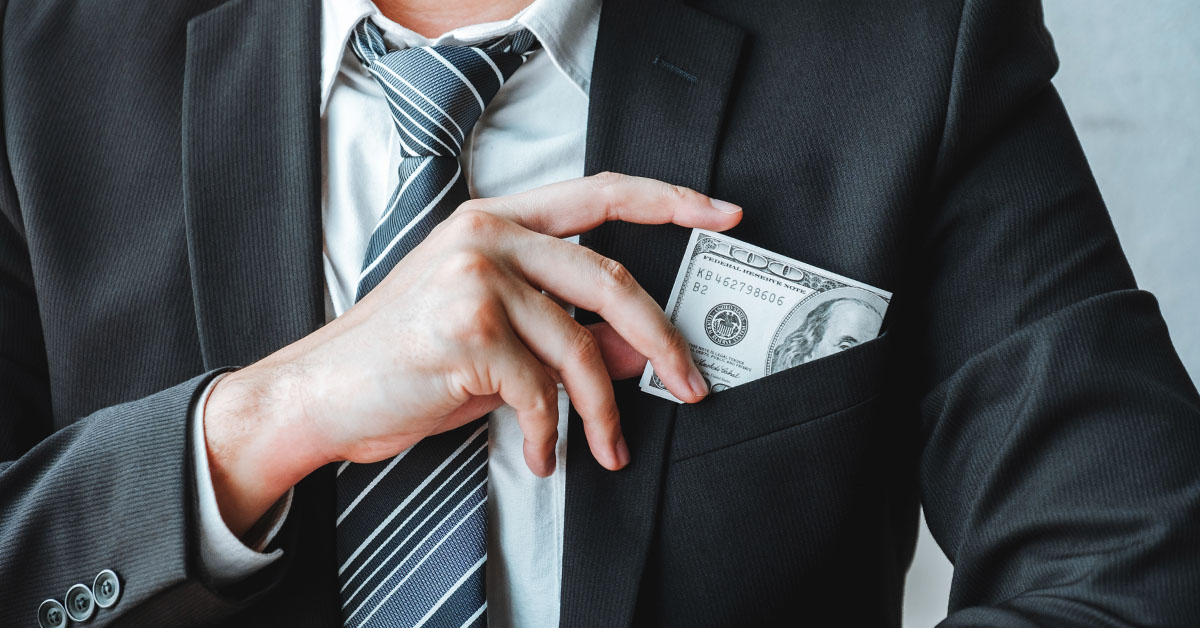 This annual Jones on Real Estate Blog on the Best and Worst State Tax Business Environments is a summary of the Tax Foundation’s report comparing all 50 states across multiple taxes for 2023.

Every state differs in where revenues are sourced, tax amounts and what services they provide. The TINSTAANREM axiom is applicable — There Is No Such Thing As A National Real Estate Market or economy. The same is true with respect to state and local taxes and services.

As similarly stated in years past:

Taxes, or lack thereof, can be an attraction or a deterrent to businesses relocating to or expanding across the country. As an economist, for example, I would have an issue residing in a state relying on state income taxes. There are seven states that have no state income taxes, but just because they do not does not necessarily equate to lower total taxes. A 2022 Rocket Mortgage showed that, Texas, for example, had the 7th highest home property taxes in 2022 at an average $3,907. In comparison, Hawaii’s and Alabama’s average residential property tax rate were less than $900 for the typical home. rocketmortgage.com/learn/property-taxes-by-state

Taxes are not the exclusive reason why firms stay, move or expand, however. There is a vast array of factors as to why businesses locate where they do: access to transportation, resources, skilled employees, markets, and family. When I was in graduate school, a valuable key course that specifically addressed this was named The Theory of the Firm in Economic Space. It was taught by Dr. Melvin Greenhut, a globally renowned economist in the study of why firms locate where they do. In modern terms and in addition to the previously mentioned tax factors, other items of importance in Dr. Greenhut’s findings included:

And perhaps most importantly: It Had to be a Location Where the CEO Wanted to Live……..

How do the states compare when it comes to taxes? To address this, each year the Tax Foundation, a non-profit based in Washington, D.C., ranks the tax friendliness of each state. This report is known as the Tax Foundation’s State Business Tax Climate Index. Each state is ranked based on five taxes with the weighting of each noted below. The weightings change slightly from year-to-year. The weighting differences were established as follows as stated in the Tax Foundation report:

The 10-best state tax environments (lowest taxes) based on these five taxes and respective ratings are detailed in the table, including state-specific ranks by type of tax. Multiple states have no state corporate or personal income taxes with each having a tied ranking of 1. 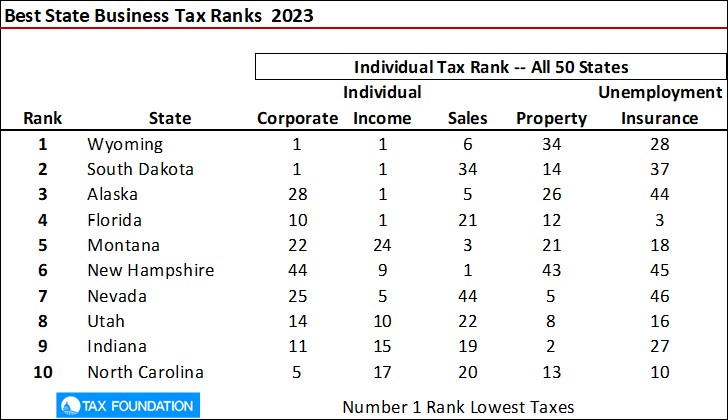 The 10 worst-ranking states (highest taxes) are detailed in the next table. 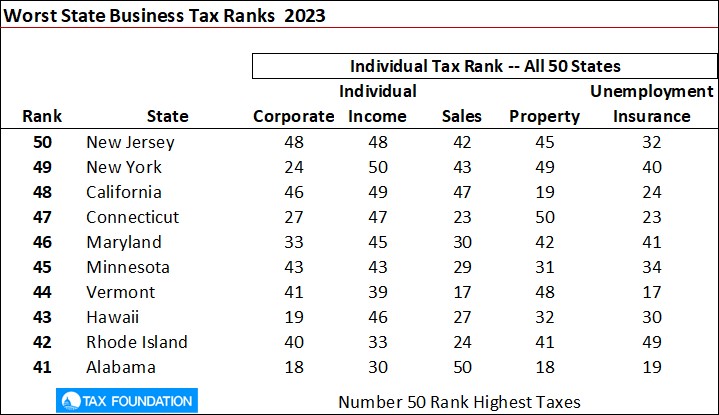 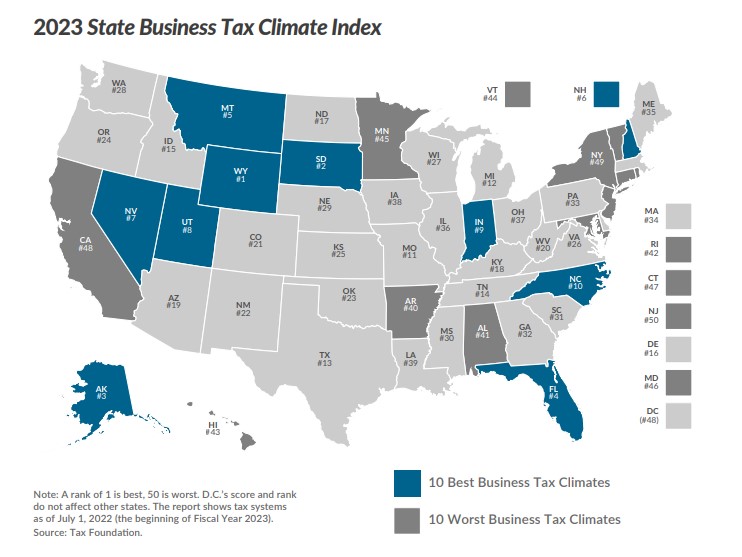 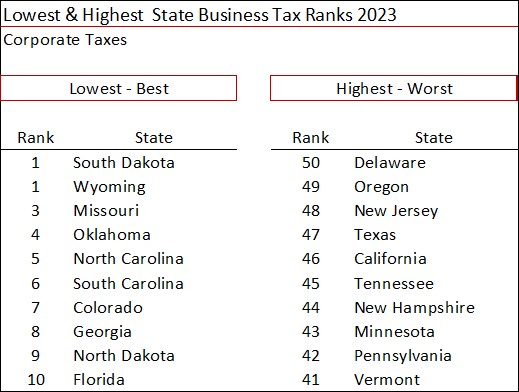 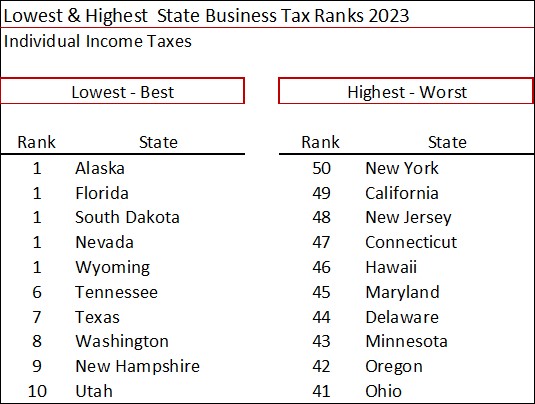 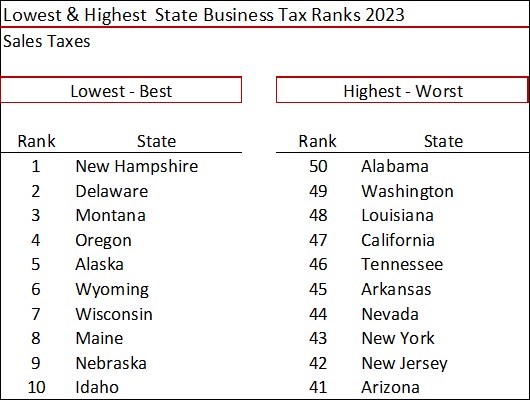 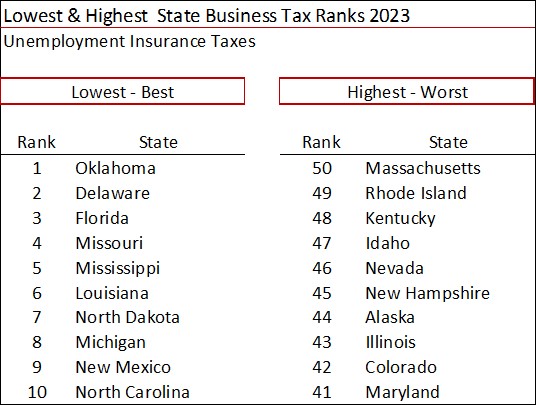 Just because a state has a great tax environment, however, does not always equate to a strong and growing economy. The next table details the total change in jobs as of October 2022 compared to February 2020, the month prior to the pandemic. There are now 25 of the 50 states with more jobs than ever before. Wyoming which is rated as the lowest overall tax wise and Alaska third lowest overall both have yet to recover all of the jobs lost at the onset of the pandemic and are not even ranked is the lowest 50 percent of states tax-wise. New Jersey, with the highest tax burden in the country, and California (3rd highest tax overall rank) both currently have the most job numbers in history despite the pandemic. 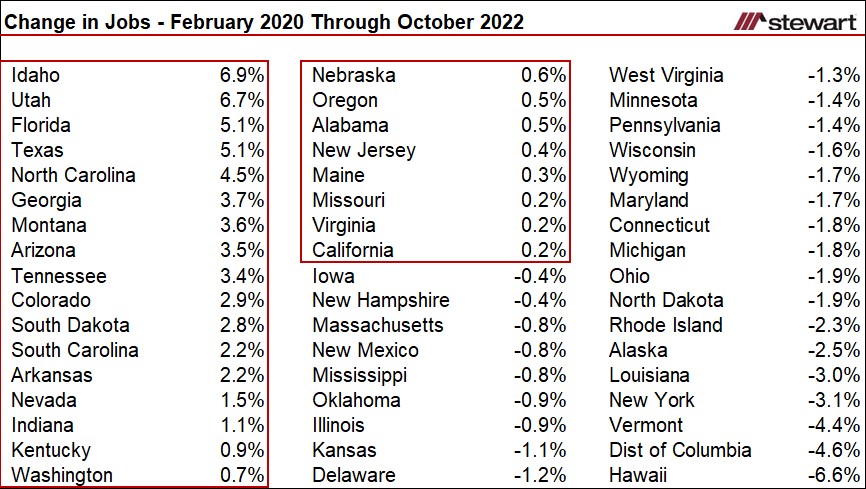 Several other features of State and Local taxes are included in the Tax Foundation study, including annual changes in taxes and respective rankings from 2022.

To learn about the Tax Foundation and view their expansive collection of tax-related research click taxfoundation.org

While taxes vary across the economic landscape on the types and incidence, state and local governments have no other way to fund the services they selected to provide. When consumers decide they either need those services not available locally or they do not need and have no desire to fund, they relocate from one state and city-metro to next. This trend in relocation was accelerated in the pandemic.

This is must-read annual comparison of state tax burdens on business across the U.S.