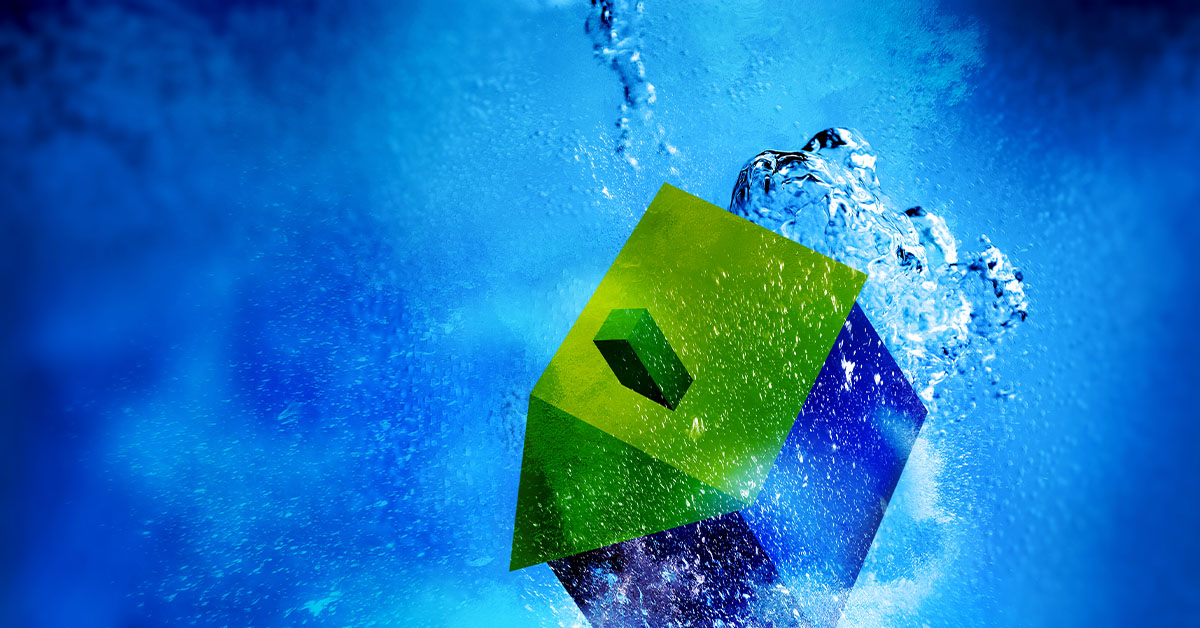 The leading economic metric of the health of housing market is the number of sales – not median price. The first indicator of a softening housing market is a drop in sales. Initially as sales decline, median prices continue to rise, Eventually, however, if sales shrink enough and supply increases, prices then decline. Unfortunately sales are plunging and prices are starting to follow.

Existing home sales dropped 29.5 percent in October 2022 to 371,000 versus October 2021 (on a raw, unadjusted basis) according to the National Association of Realtors® (NAR) and were down 28.4 percent on a seasonally adjusted annualized rate (SAAR) to 4.43 million. Sales have now declined a record nine consecutive months on a SAAR. Year-to-date existing home sales are down 14.3 percent from the same period a year ago – a decline that continues to accelerate.

Median price rose 6.6 percent year-over-year to $379,100, but was down from the June 2022 all-time record high of $413,800. Median prices have increased 128 consecutive months on a year-over-year basis, the longest upside streak in history.

Median Price – October 2022 (due to historic monthly seasonality of existing home prices, only a year-over-year comparison is made)

Since July 2022 sales have been down year-over-year in each and every price range reported by NAR. 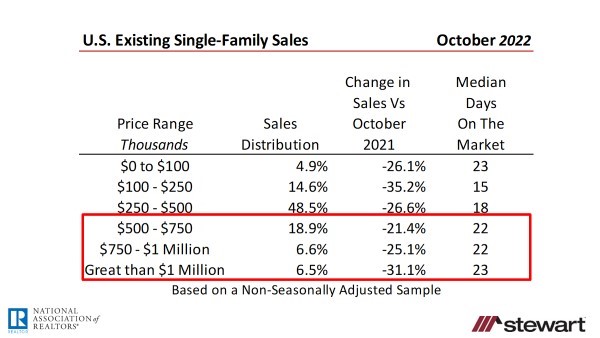 Prior to the pandemic, 6 months of inventory for existing homes was considered normal. I do believe, however, with the full integration of online home searches and technologies such as virtual home tours, digital signatures and closing aids such as remote online notarizations, the new normal is one-half the pre-pandemic levels. Thus I would argue that the U.S. overall now is normal in the relative number of listings. 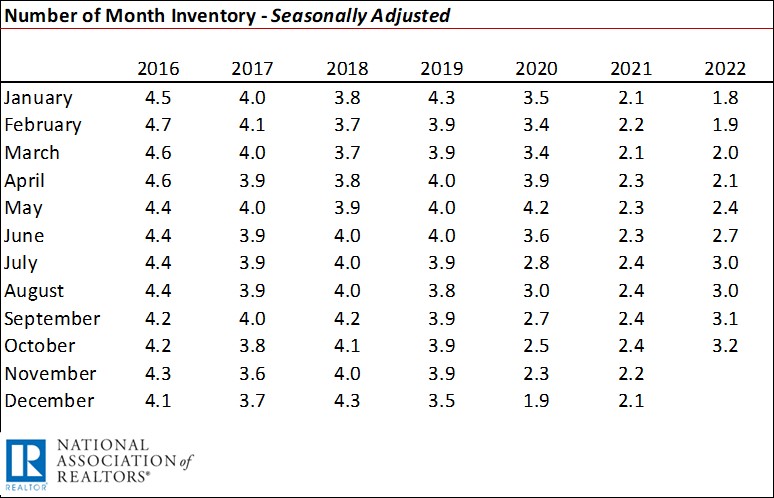 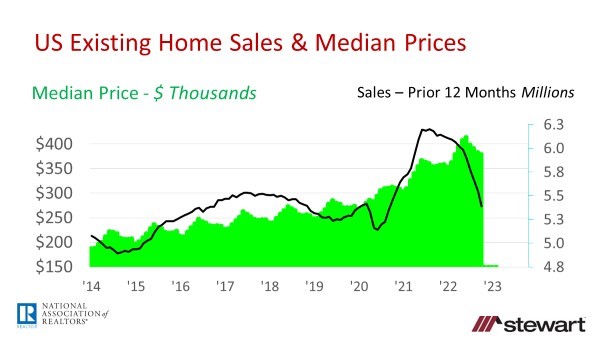 The seasonally adjusted annualized sales rate of 4.43 million in October 2022 was the lowest seen since May 2020  after the U.S. shed a record 22 million jobs from March to April as the pandemic progressed. 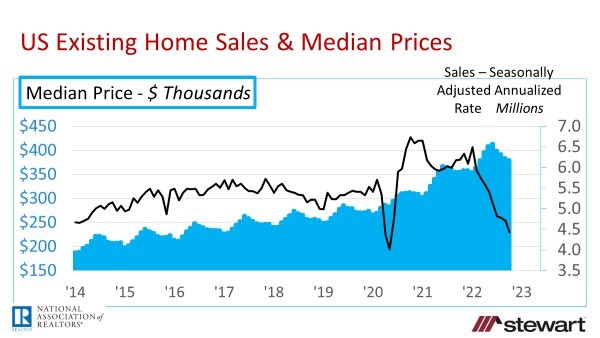 The next graph shows the raw, unadjusted number of monthly home sales annually from 2019 through October in 2022. The real comparison is not monthly 2022 sales numbers to 2020 or 2021 as these data are anomalies due to the pandemic. The only time look at 2020 and 2021 data numbers in the future will be in the next pandemic to serve as a gauge in forecasting sales and market behaviors at that time. Since the last normal market was 2019, comparison of 2022 data should be made to 2019. Sales in 2022 have dropped for four consecutive months. The erosion in monthly home sales comparing 2019 to 2022 has grown from -17.7 percent in August, -21.6 percent in September and -29.5 percent in October. 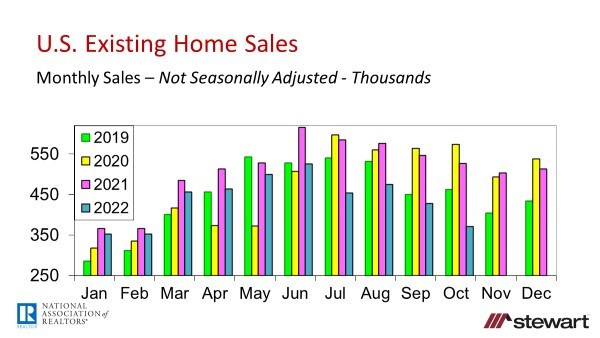 Other Details Included in the NAR October 2022 Release

Listing inventory of 1.22 million units in October 2022 was down 0.8 percent both sequentially in September and one-year ago

Months Inventory at the end of October 2022 was 3.3 months (not seasonally adjusted) compared to 2.4 months 1-year ago

1st time homebuyers accounted for 28 percent of October closings, almost flat from 29 percent one-year ago. Continuing erosion of affordability will no doubt negatively impact 1st-time homebuyers ability to access the great American dream given rising prices and interest rates. CNN reported that according to NAR’s 2022 Profile of Home Buyers and Home Sellers the percentage of 1st-time homebuyers plunged to a record-low 26 percent, down from 36 percent a year ago.

Distressed sales – foreclosures and short sales – are still not an issue, making up 1 percent of October 2022 transactions. This was unchanged from year-over-year but down from 2 percent in September.

To read the full press release from NAR click nar.realtor/newsroom/existing-home-sales-slumped-5-9-in-october

Inflation - Recent months have seen the highest inflation rate in 40 years which peaked at 9.1 percent in June and has cooled slightly to 7.7 percent as of October. The US Congress Joint Economic Committee estimated current inflation is costing households $728 per month more since January 2021 when inflation was last in a normal range. At the now 6.61 percent 30-year conventional mortgage rate (per Freddie Mac), a monthly payment of $728 would service a $113,871 loan. Conventional 30-year fixed-rate mortgage rates have more than doubled from the all-time record low of 2.65 percent in January 2021.

Recession – Each of the past 10 recessions were defined by two or more consecutive quarters of negative Gross Domestic Product (GDP). Q1 1 and Q2 GDP this year came in-1.6 percent and -0.6 percent, respectively. Good news is the first of three estimates for Q3 2022 GDP annualized, inflation-growth came in at 2.6 percent. Bad news is that many (but not all) analysts expect a recession in 2023:

As consumers anticipate a downturn they buy less which causes the recession.

Affordability – If the October forecasts from the MBA and Fannie Mae are correct for median home prices and interest rates in 2023, the monthly principal and interest payment for a household buying the typical home will increase from 2020 to 2023 by 73.1 percent to 85.0 percent, respectfully. That is a sobering number.

There continues to be nothing on the economic radar indicating the shrinking home sales trend will change in the next 12 to 18 months.