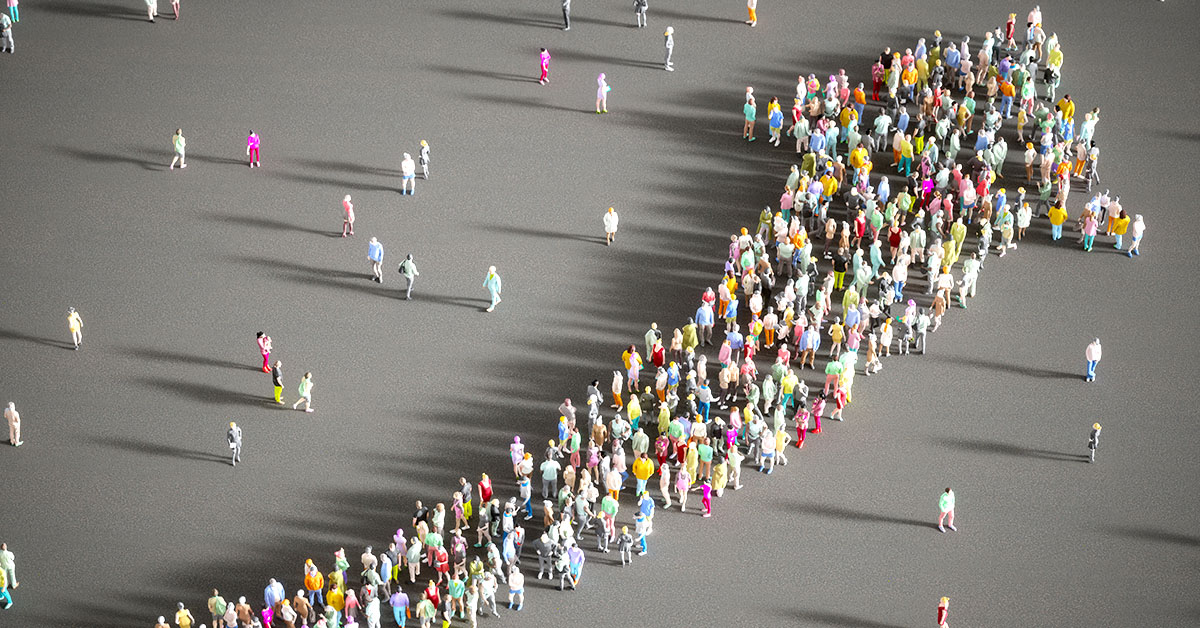 Unemployment Remains at 3.7 Percent as Economy Remains Robust, Hour Wages $32.82 Up 5.1% in Past Year

The U.S. added 263,000 net new jobs on a seasonally adjusted basis in November 2022, 63,000 more than expected from a survey of economists by The Wall Street Journal. The Bureau of Labor Statistics (BLS) reported the unemployment rate remained at a less-than normal 3.7 percent and that the hourly wage rose 5.1 percent in the past 12-months to $32.82.

For the fourth month in a row the U.S. has more jobs than ever before. Total employment numbers monthly are shown in the graph commencing 2007 and unemployment data are detailed in the first table since 2012. The current unemployment rate is less than one-half the level seen a decade ago. 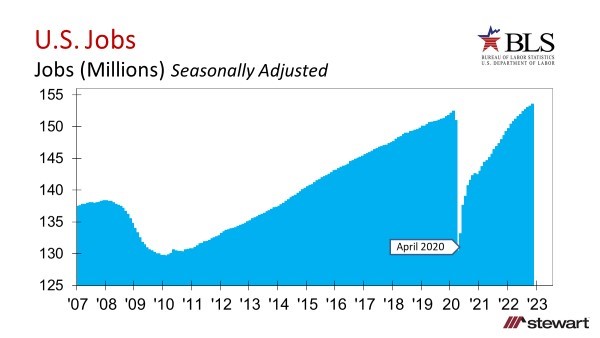 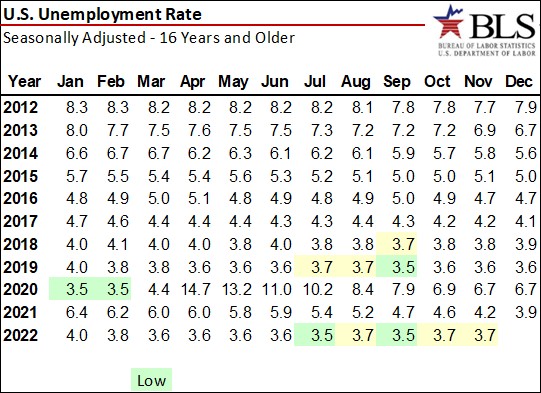 The plunge in jobs at the onset of the pandemic and recovery along with unemployment is shown monthly in the next table. Unlike the 2008 recession, this recovery was far quicker even though the drop was almost three times as severe.

Not all news was good, however. More than 3.6 million workers with jobs were classified as Employed Part-Time for Economic Reasons in November– which means their work hours were cut due to business conditions or slack work demand. These individuals would prefer fulltime employment but cannot find such a job.

The Labor Force Participation Rate (percentage of the population that either has or is actively searching for a job), was 63.4 percent in February 2020 (the month prior to the pandemic), and slipped to 61.2 percent in November. Other than during the pandemic, this is the lowest Labor Force Participation Rate (LFPR) seen since July 1977. If the U.S. had maintained the same LFPR as seen in February 2020 there would be an additional 2.14 million Americans either actively searching for a job or employed today. 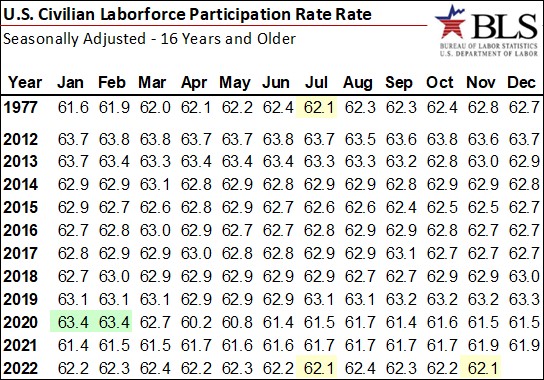 Though the U.S. had more jobs than any month in history in November 2022, that was not true across all of the SuperSectors as defined by the BLS. Mining and Logging (which includes Oil & Gas) is still down 47,000 jobs when compared to February 2020, Leisure & Hospital is short 980,000, Other Services is off 186,000 and Government is missing 461,000. Changes in employment across the SuperSectors are shown in the next table – delineated by thousands of jobs and percentages. The U.S. lost 14.4 percent of all jobs in the first-two months of the pandemic (21.991 million positions) but has brought back or created 1.044 million more jobs than compared to February 2020. 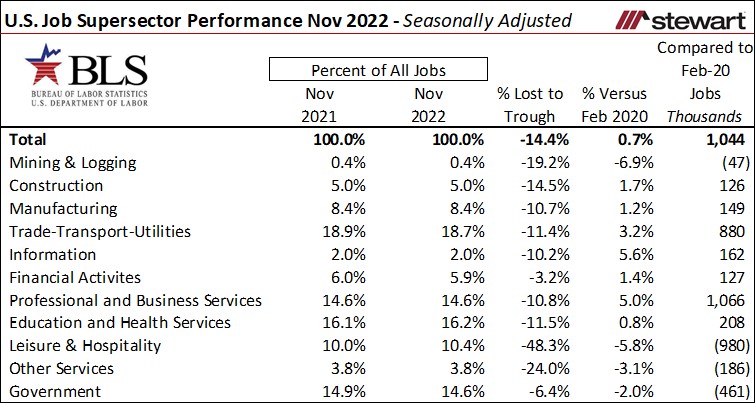 Hardest hit SuperSector at the start of the pandemic was Leisure & Hospitality which hemorrhaged 8.203 million jobs or 48.3 percent of the total segment in March and April 2020. This Sector added 88,000 jobs in November which included 62,000 in Food Services and Drinking Places as the country returns to more-normal pre-pandemic activities. The Sector is still short almost 1 million jobs (980,000) from February 2020, however. 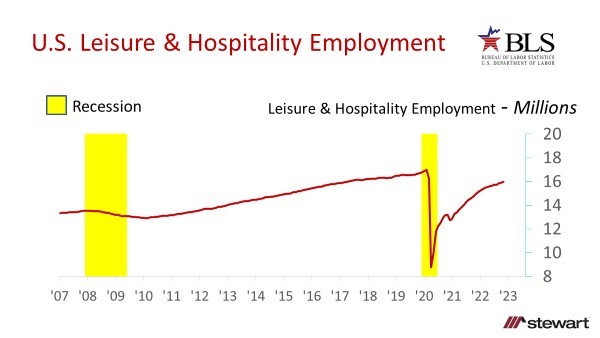 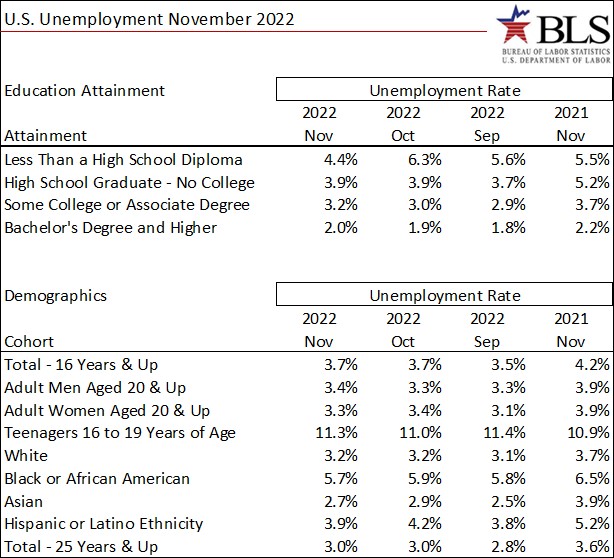 For a plethora of employment related metrics click https://www.bls.gov/

Jobs are everything to the economy and the November 2022 jobs report from the BLS was better than expected. The stock market, however, reacted negatively today to the good job news as it also signaled that the Federal Reserve would continue increases in the Fed Funds Rate at upcoming Open Market Committee meetings. Their intent is to slow this better-than expected economy in hopes of trimming inflation. With many voicing concerns of a recession in 2023, this may be the pinnacle jobs report for the many months to come.