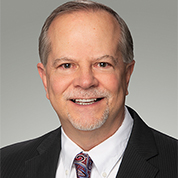 Jeff brings over 30 years of leadership and sales experience to his role as business development officer for the Stewart Title Comal Offices: New Braunfels, Canyon Lake, and Garden Ridge. As a resident of New Braunfels since 1971, Jeff has a deep knowledge of the local market, which comes in handy when building and strengthening client relationships. In 2014, he received the Stewart Title San Antonio Division’s Rising Star Award.  In 2015, Jeff was honored with the Shining Star Award and Diamond Club Sales Award.

Prior to joining Stewart, Jeff spent over 25 years in management, operations and business development in diverse, real estate positions in the San Antonio-Austin corridor. He has specialized in a wide variety of areas, including affordable, single-family, multifamily, military privatization housing and lodging for the Air Force, Navy and Army, new construction, and senior housing. Jeff is experienced in both profit and non-profit organization leadership as well.

Jeff has been active in numerous real estate industry organizations. He was an active board member of the Affordable Housing Management Association (AHMA) of South Texas for seven years. He served five years on the board, the last two as president. He was executive director of the San Antonio Apartment Association, which includes Bexar and 20 surrounding counties. Currently, he is a member of the New Braunfels Chamber of Commerce, Four Rivers Association of REALTORS® and the Women's Council of REALTORS® – Hill Country Chapter.  In 2016, Jeff served as WCR Membership Chair and Director of Affiliates.  He was recently named Affiliate of the Year.

He is married to Danielle; has three children, Skylar, Sierra and Ridge; as well as two dogs and a cat. Jeff is an active member of First Protestant Church in New Braunfels. In his free time, he and his wife support their children’s activities.  Jeff loves all sports, particularly the Spurs and enjoys the great outdoors.  He and his family love being involved in their Community!

Jeff has recently been awarded the 2016 Stewart Sales and Operations Club Excellence.