Jobs are everything to the economy and the ultimate source of effective demand (purchasing power) for residential and commercial real estate. Period. Good news is that the U.S. had a record 9.3 million available positions according to the Job Openings and Labor Turnover Survey (JOLTS) as of the end of abril 2021, a monthly data release from the Bureau of Labor Statistics (BLS). Yet as of junio 2021, the U.S. unemployment rate ticked up to 5.9 percent from the 5.8 percent in the prior month.

The Federal Reserve defines full employment for the U.S. when the unemployment rate ranges from 5.0 percent to 5.5 percent, or less. Using this definition, the U.S. was fully employed in the four years prior to the onset of the pandemic in 2020 as shown in the graph below. The unemployment rate exploded from a 51-year low 3.5 percent in febrero 2020 (also reached in septiembre 2019 and enero 2020) to 14.8 percent in abril 2020 just 60 days into the pandemic. 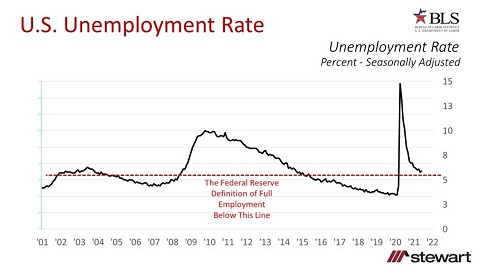 Historical U.S. unemployment rates are shown in the next graph for just the month of December each year commencing in 1929 – immediately prior to the great recession. The unemployment rate climbed from 3.2 percent in diciembre 1929 (despite the stock market crash in September and October of that year), to 24.9 percent as of diciembre 1933. At that time, however, the support for the unemployed came from the New Deal, which from 1933 to 1939 created temporary jobs for the Works Progress Administration and the Civilian Conservation Corp. 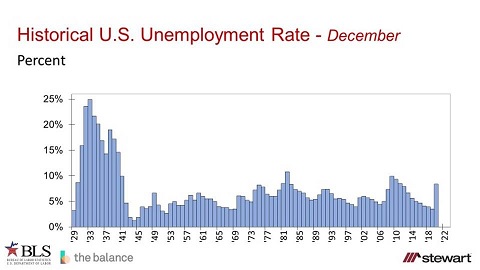 Unlike the periodic jobless peaks seen since 1929 and despite the 60-day spike in the unemployment rate from 3.5 percent to 14.8 percent (February to abril 2020), those unemployed in the latest COVID-caused recession saw the best economic safety net in U.S. history – which historically never existed to the extent prior to the Coronavirus downturn. Just as the cost of living varies across the country, likewise do unemployment benefits.

Current state-level unemployment benefits (excluding federal weekly payments) were analyzed by 24/7 Wall Street to rank the Best and Worst States to be Unemployed based on state-specific data from abril 2020 to abril 2021. To rank states, 24/7 Wall Street created an index based on four metrics: 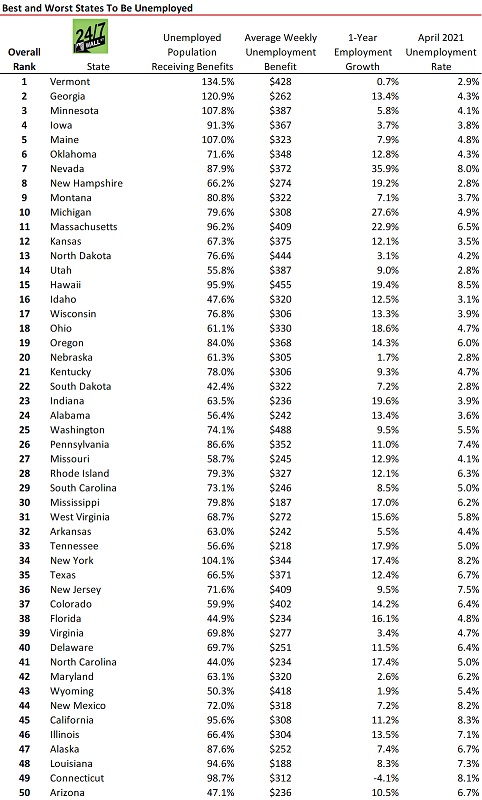 This changed significantly in marzo 2020, with the signing of the Coronavirus Aid, Relief and Economic Security Act (CARES Act) that vastly expanded unemployment benefits to millions – including many not ordinarily eligible. For most, in addition to the weekly state-administered unemployment benefits, recipients were also paid $600 extra – expiring 31 de julio de 2020 (but due to administrative rules ending July 25th for some states).

An added $300 weekly benefit payment started on 26 de diciembre de 2020, and was originally set to last 11 weeks, but was extended through 6 de septiembre de 2021 by the $1.9 trillion American Recovery Plan (ARP).

Weekly and effective hourly benefits for the unemployed are shown in the next table for the state only, state plus $600 federal payment, and state plus $300 weekly federal payment. None of these include the $1,200 one-time stimulus check resulting from the CARES Act (an estimated 160 million people) or the $1,400 ARP funded direct payment (to 167 million). Those two lump-sum payments raised the effectively hourly benefit or wage by $1.25 assuming 40-hour work weeks and 52 weeks per year. These are not adjusted for the 26 states which are planning or have already terminated the $300 weekly federal payment to the unemployed in hopes of motivating many to return to the workforce. Assuming the state plus $300 weekly unemployment benefit, 33 states were paying more than $15 per hour to the unemployed based on 40 hours per week, greater than the hoped-for federal minimum wage target by the Biden Administration.