Some things were different at the Super Bowl this year while others remained the same. New facets ranged from the miniscule 25,000 fans that were allowed in the stadium, to the never-before-seen 30,000 cardboard cut outs, and the almost 10,000 vacant seats due to the capacity restrictions. For the first-time in history, the Super Bowl was played at the home stadium of one of the two teams – and yes, the ultimate home-field advantage won.

Typical was the almost 100 million viewers (96.4 million estimated by CBS, though down 9 percent from last year) watching either on TV or streamed on the internet. Unchanged included Tom Brady – now almost a fixture at the Super Bowls after making his 10th appearance and notching a 7th win. No doubt Sunday was another record day of the year for avocado consumption. I did my part! Unchanged was the one-day of the year that people focused on TV commercials – a Super Bowl delight!

Super Bowl commercials have been an ongoing extravaganza at the NFL’s pinnacle game. The cost per 30 seconds, however, has changed dramatically over the decades. The first table shows a summary of average cost per commercial commencing with the first Super Bowl in 1967 -- in both then and 2020 dollars – along with the teams that played. The average cost per commercial increase by 1,708 percent in 54 years in real terms (inflation adjusted) at a 5.5 percent compound annual rate of gain. 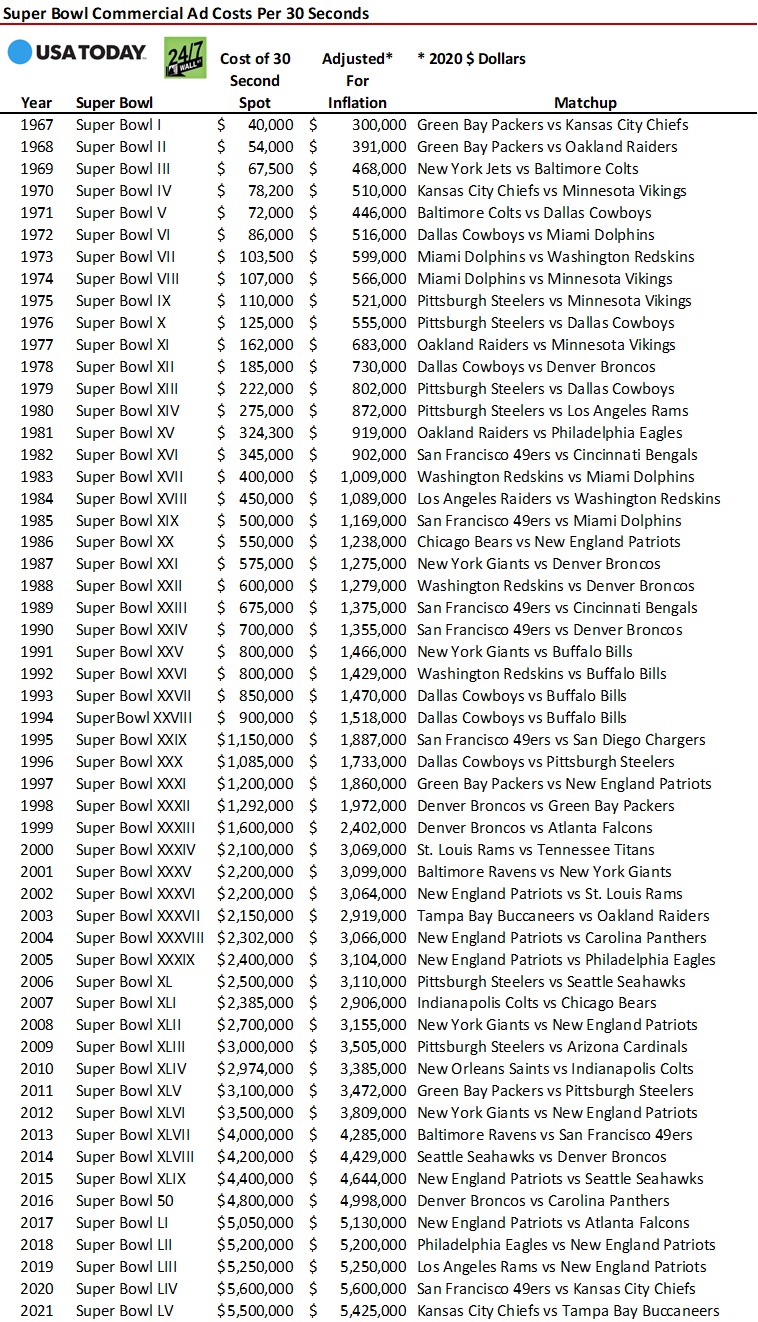 Since many people have a hard time grasping inflation, this is a short-cut way around the complexity of compounding mathematics. Going from 2 homes per Super Bowl ad in 1967 to 20 shows in 2016 shows that TV ad costs went up 10 times more than home values. Wow.

One reason that Super Bowl ad costs escalated so much is that there are so many more viewers today. Back in 1967 the U.S. population was 198.7 million versus an estimated 331.4 million today. Still, Super Bowl commercial costs went up so much more. These numbers make housing look a lot more affordable than other goods and services.

Next time some someone remarks to you how expensive housing is today, tell them that a Super Bowl Ad in 1967 cost just two homes and now costs almost 20. Housing costs have not gone up nearly as much! Thank heavens too to record-low interest rates.