Jobs Most Likely to Be Left Behind by Workers - Pre-Coronavirus

One-out-of-every nine workers (11,4 percent) typically switch occupations, leave the workforce, get fired or retire each year – and that was before the Coronavirus. When you consider the U.S. had more than 152 million total jobs as of the end of tháng hai 2020, 11,4 percent of people switching jobs equates to 17,3 million new hires and departures each annually. That’s a lot of work for HR departments involving personnel changes -- and considerable expenses for business across the country.

Some workers switch careers for a multitude of reasons ranging from better pay, more desirable work conditions, or for strategic reasons such as gaining new skill sets. Others leave the workforce -- whether temporarily or permanently -- and some are terminated. Not all jobs have similar tenures of employment. Some are highly transitory while other types of jobs have many lifelong workers. Many jobs are literally disappearing as technology and the economy evolves.

To identify those jobs with the highest turnover rates, 24/7 Wall Street examined data from the Bureau of Labor Statistics’ (BLS) Employment Projections Program. Occupations were ranked by projected turnover rates, also called separations rates. These are actual and forecast annualized percentage of workers departing each year from 2018 through 2028, whether voluntarily or by termination.

In addition to identifying the 24 professions with the greatest turnover rates, 24/7 Wall Street included the actual employment numbers in 2018 and projected employment a decade later in 2028, along with the median annual wage in 2018. Departure or turnover rates for these 24 jobs range from a high of one-in-four annually for Ushers, Lobby Attendants and Ticket Takers (24,3 percent) to a low of one-in-six Crossing Guards (16,4 percent). All of these higher-turnover jobs were relatively lower-paying positions with a median annual wage of $25.100 in 2018 contrasted to $32.600 across the country as shown in the following table. 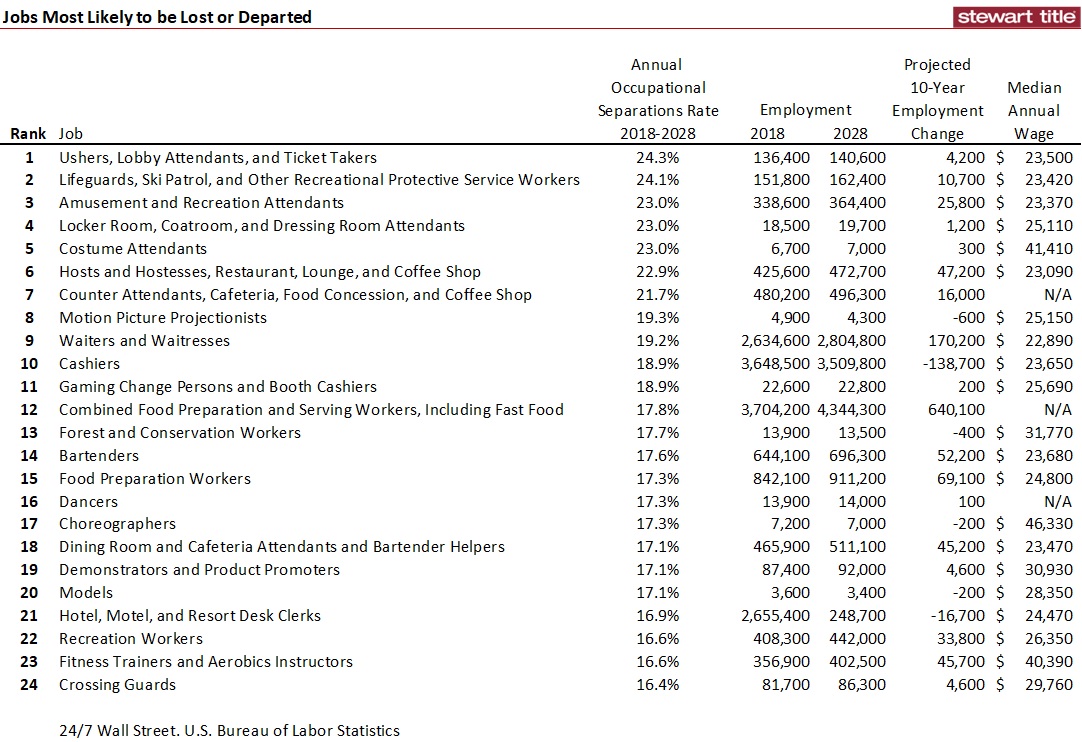 To see the BLS’s Employment Projections Program findings for all occupations click https://www.bls.gov/emp/tables/industry-occupation-matrix-occupation.htm. To review the entire study from 24/7 Wall Street click https://247wallst.com/special-report/2020/08/10/these-are-the-24-jobs-you-are-most-likely-to-lose/

While the original 24/7 Wall Street article stated these were the most likely jobs to be lost, not all of these are truly lost, but often are left behind by workers pursuing other opportunities. These loss rates were for 2018 which was prior to the outbreak of Coronavirus. The pandemic accelerated departures from some types of jobs -- at least temporarily -- though permanently for others.

Do not think of these as bad jobs, but rather as jobs that are not long-term pursuits for most people. While the median annual wage is just 77 percent across these 24 professions compared to all workers, many of these high-turnover positions require minimal skill-sets which are the basis for compensation.