Jobs continue to be recovered since the plunge seen at the onset of the pandemic in 2020. Though the U.S. recouped another 379.000 jobs in tháng hai 2021 nationwide, there still remains 9,47 million yet to be brought back. The recovery rate of jobs, however, differs across the country. Various metrics for 380 of the Metropolitan Statistical Areas (MSAs) reported by the U.S. Bureau of Labor Statistics (BLS) are included in the following analyses.

The latest 12-month job details shown in the next two tables includes the 40 best- and worst performing MSAs from tháng hai 2020 to tháng hai 2021. Recall that tháng hai 2020 was the baseline month prior to the 22,4 million job loss that took place nationwide in March and April of last year. The first table lists the 40 MSAs with the best 12-month job growth rates. The 10-best metros all have more jobs today than one-year ago, though 370 MSAs still have yet to return to their prior per-pandemic employment levels. 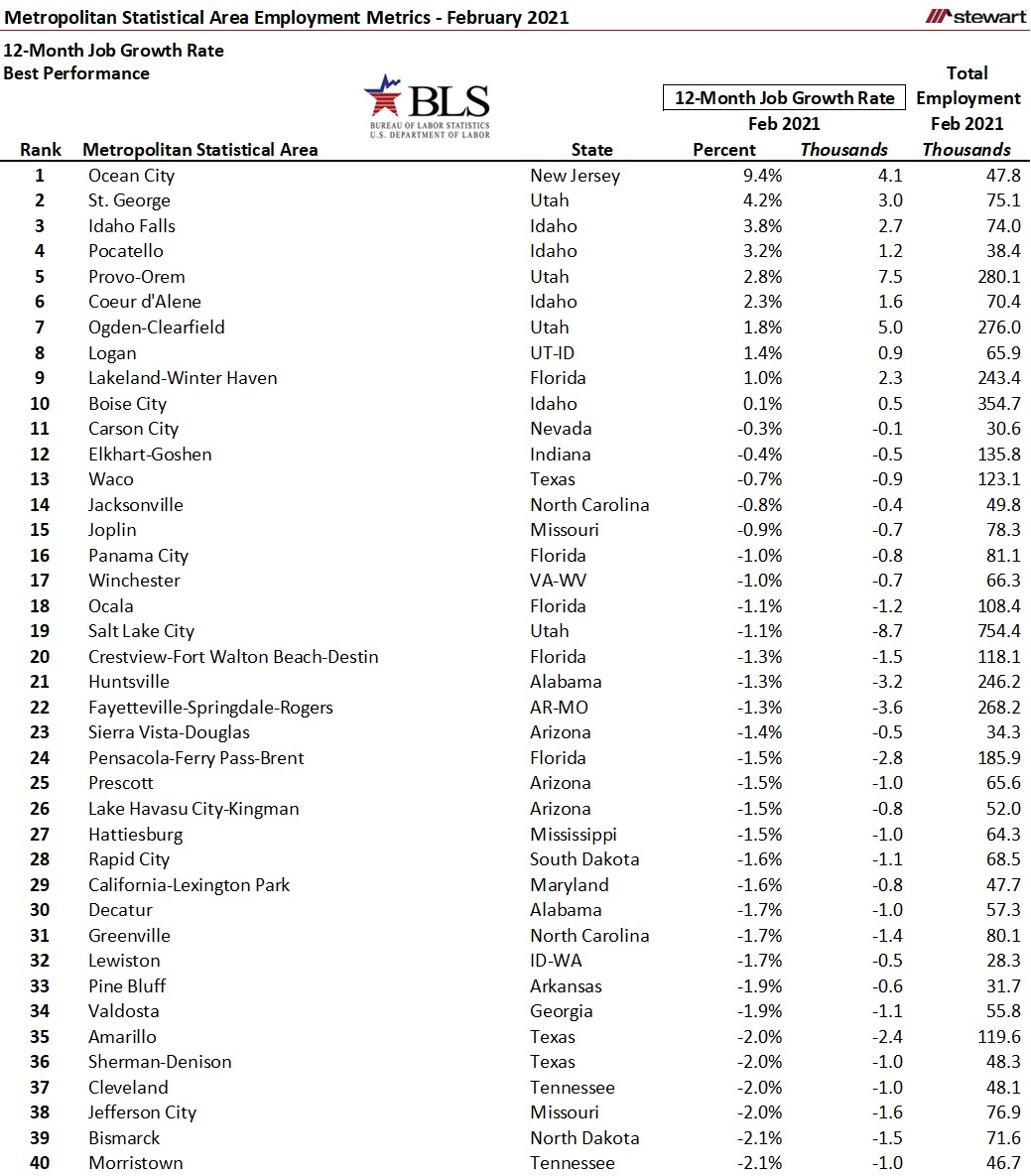 These metros posted the largest 12-month loss as a percentage of total jobs since tháng hai 2020. Predominant were several cities with a high-level of reliance on Leisure & Hospitality sector jobs (which saw the largest percentage drop in employment of all Supersectors in the first 60 days of the pandemic) and oil & gas production (due to the plunge in demand and respective price of transportation fuels). 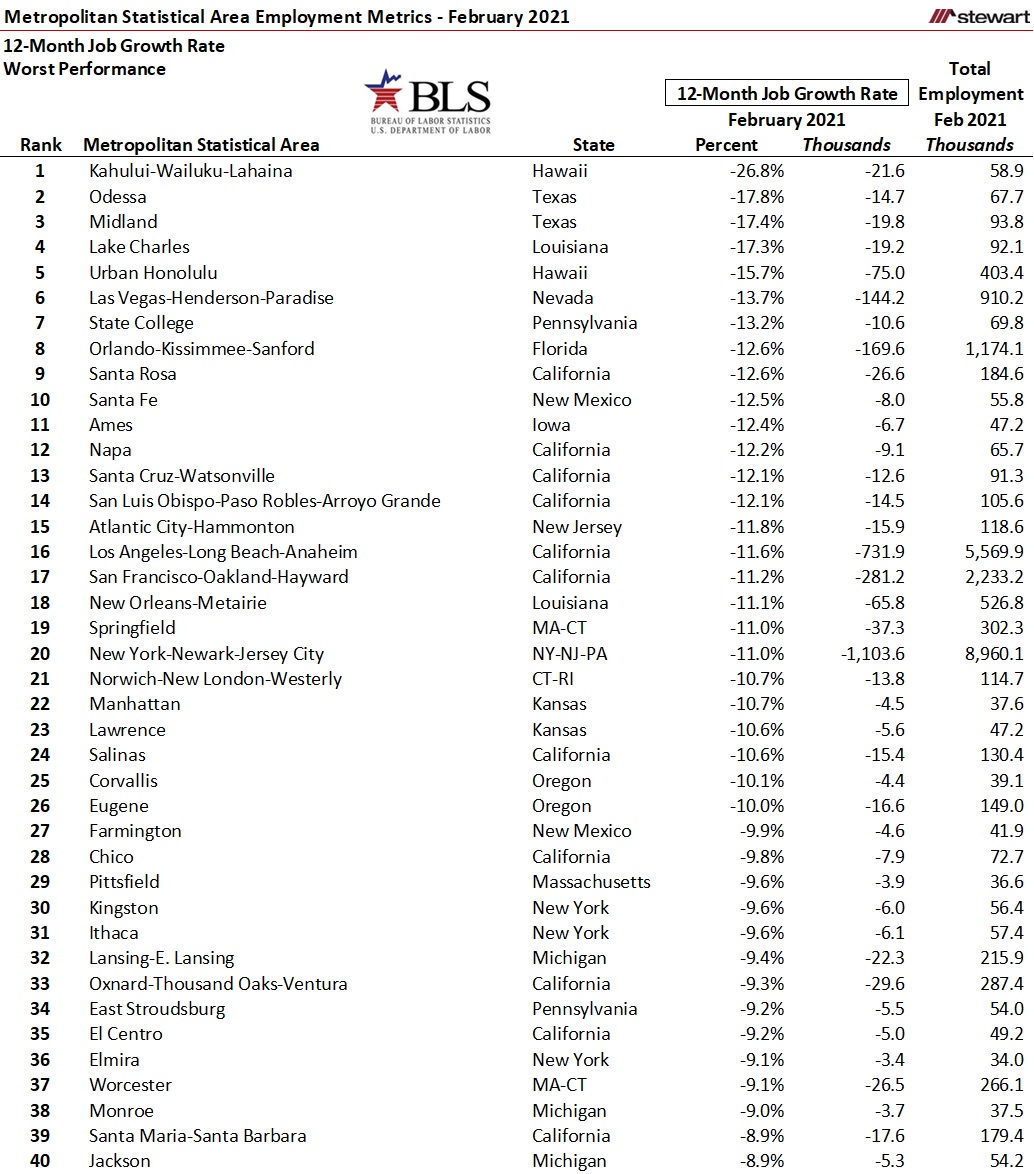 The one-month change in job performance showed a much broader level of recovery, with 205 of the 380 MSAs (53,9 percent) posting at least 0,1 percent growth from January to February this year. The next two tables detail the 40 MSAs each with the best and worst 1-month job growth rates. Several of the best-performing MSAs posted 1-month gains that would normally have been respectable for an entire year. On the downside, 16 MSAs (4,2 percent) lost at least 1 percent of all jobs from January to February. 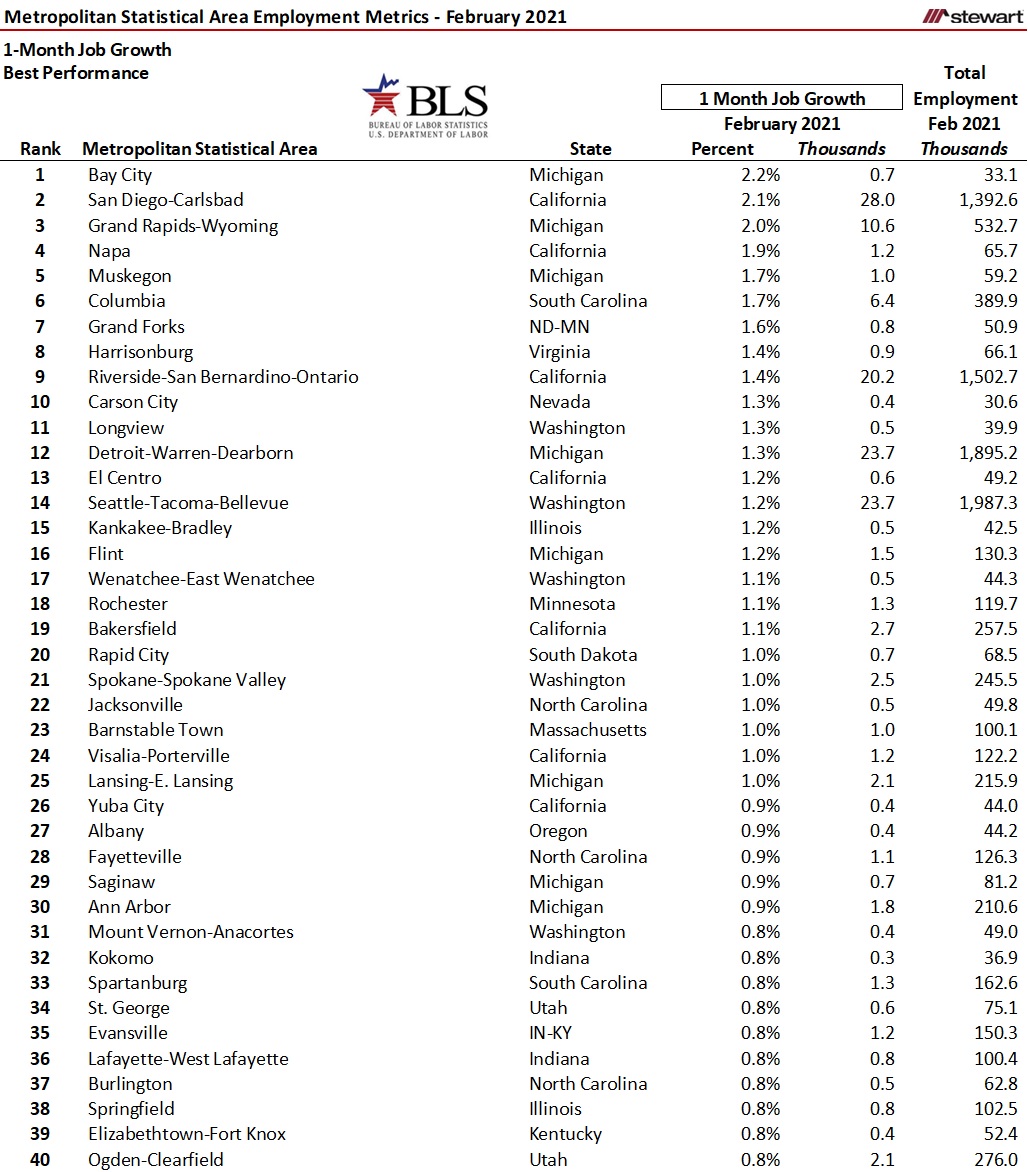 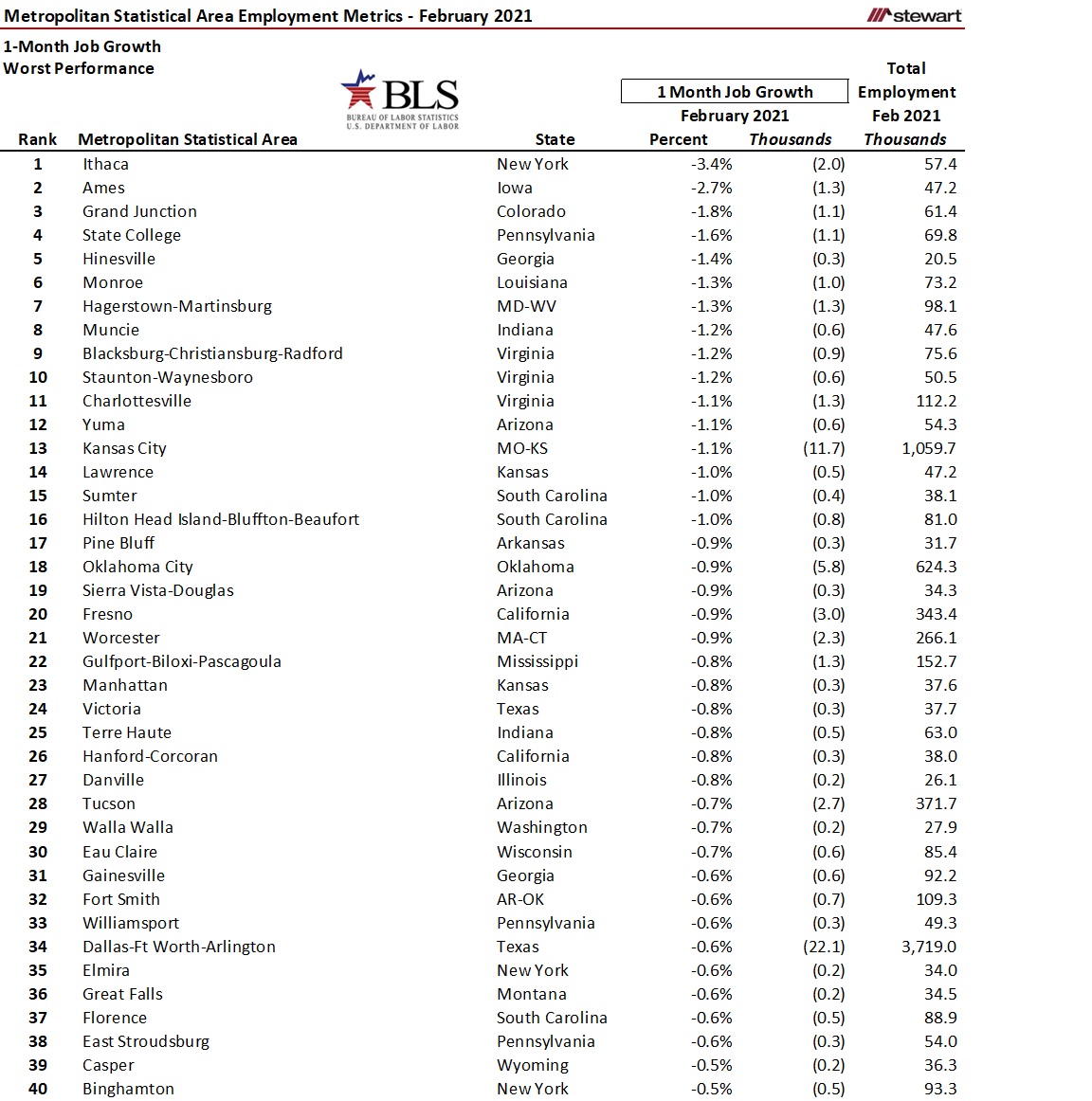 The next two tables show the total percentage of all jobs lost since tháng hai 2020 (the baseline prior to the pandemic) to the trough (the low jobs point from tháng tư 2020 through January of 2021) among the 40-best and worst performing metros. Some of these have changed since the last blog on this given the BLS’s annual restatement of the prior year numbers in the first months each year. 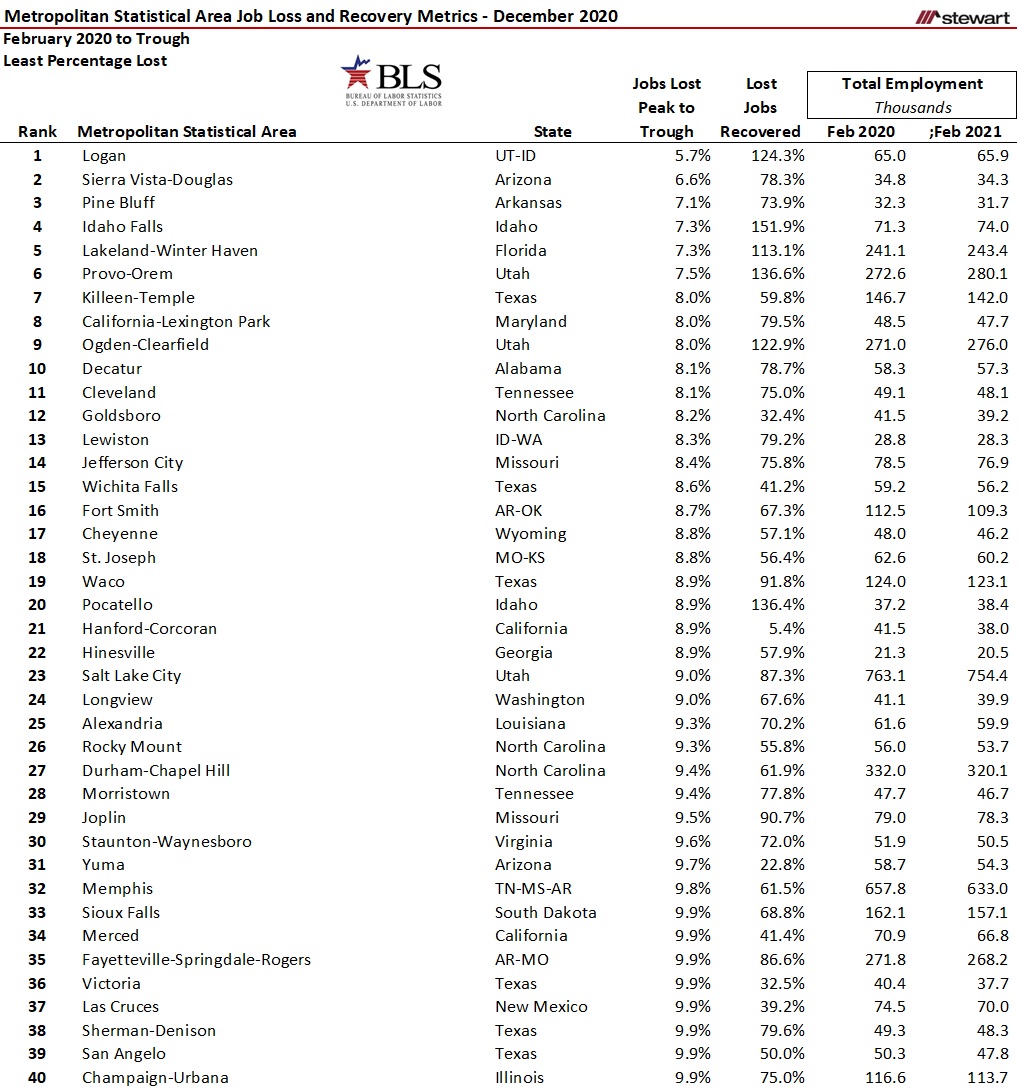 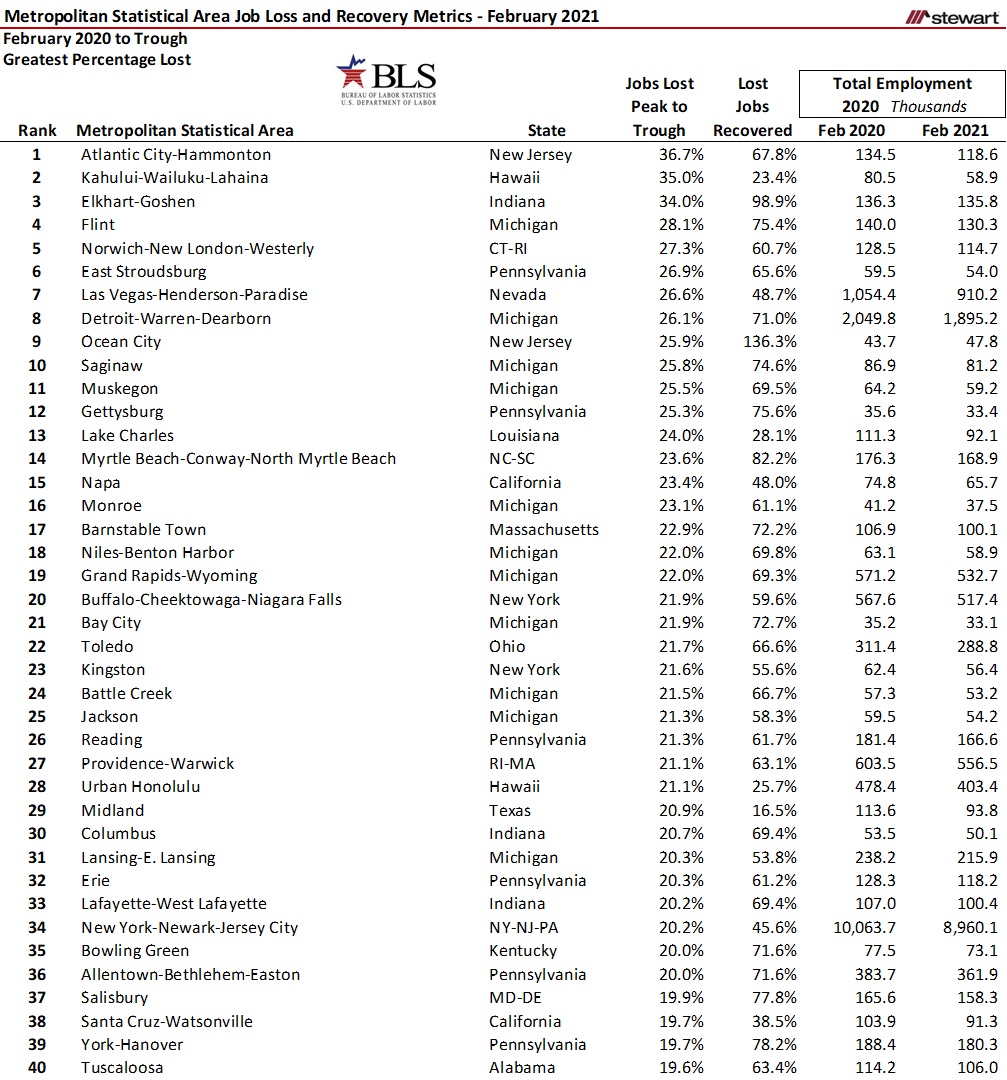 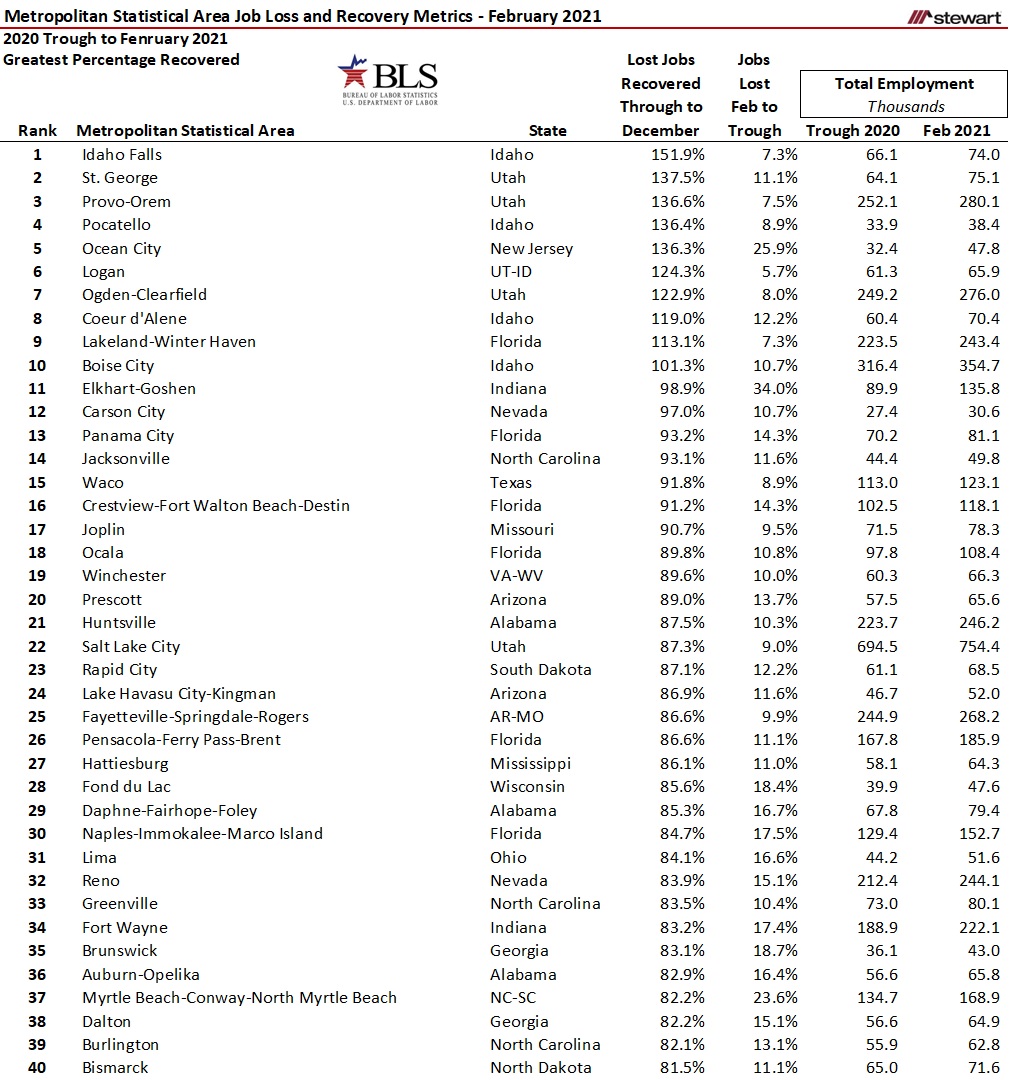 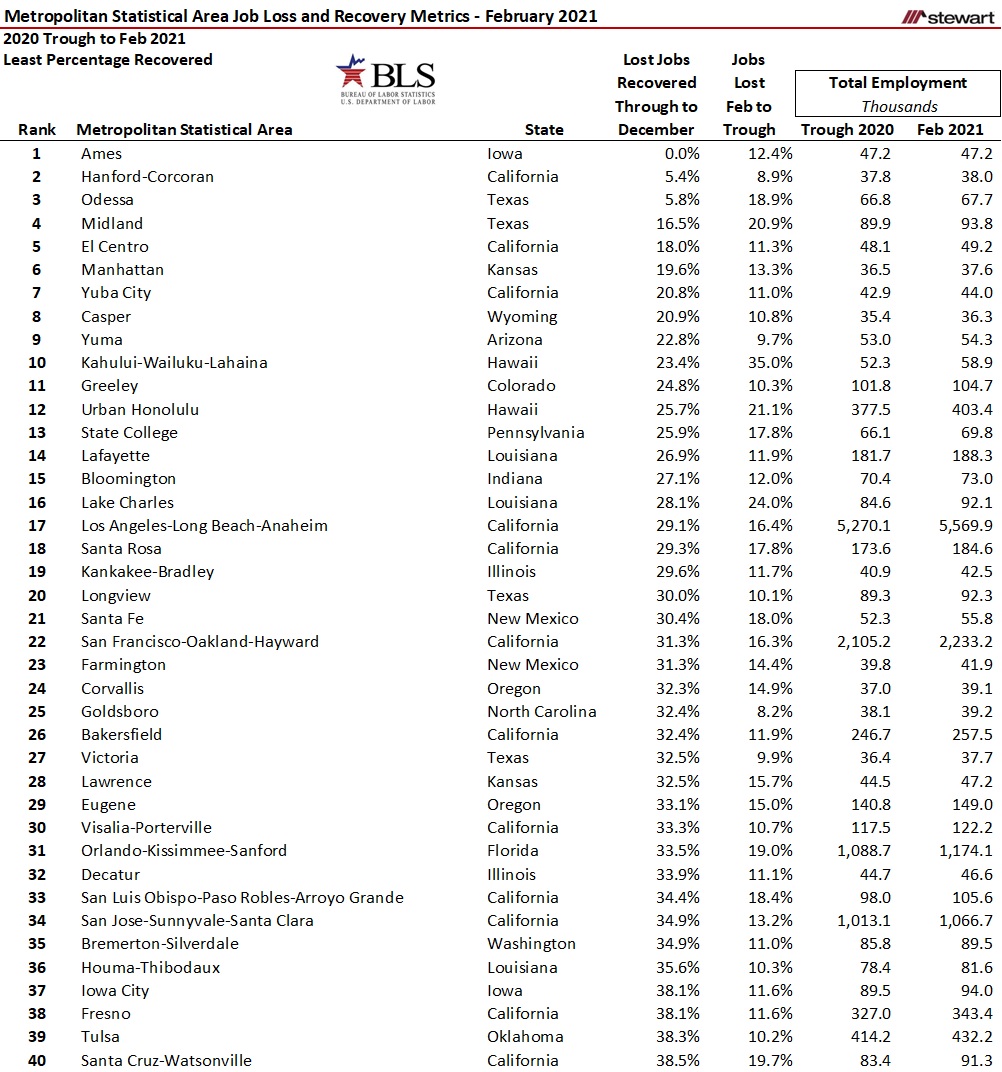 Good news is that job growth is trending positive across most the country. Bad news is the less than 5 percent of all metros have essentially recovered all of the jobs lost in the pandemic – at least numerically speaking. Focus should be on job growth numbers to be reported for tháng tư 2021 which would include impact of the $1.400 per person payment that is estimated to be received by more than 85 percent of U.S. households.

My personal belief is that many of the yet-to-be-recovered 9,5 million lost jobs no longer exist regardless of where the economy heads. Yet to be seen are the potential positives resulting from the infrastructure bill or the negatives due to likely tax increases. Ted