Employment Report tháng sáu 2021 -- Best Job Gains in 10-Months, Recovery Continues But Not Fully Back Yet

The U.S. has now recovered all but 6,76 million of the 22,4 million jobs lost in March and tháng tư 2020. Total employment using seasonally adjusted data from the BLS are shown in the graph. A significant portion of these gains are still stimulus driven, with the $1,9 trillion American Rescue Plan estimated to increase GDP by 4 percent alone in 2021 and another 2 percent in 2022. 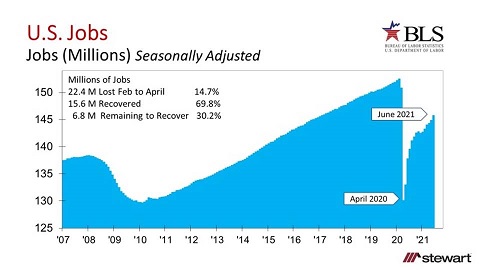 The recovery continues to be unequal across the differing Supersectors as defined by the BLS. The following table shows the net change in jobs from May to tháng sáu 2021 by Supersector, based on seasonally adjusted data. The leader this month in both total and percentage gain was in the Leisure & Hospitality Sector, which added 343.000 jobs in the month for a massive recovery of 2,4 percent. 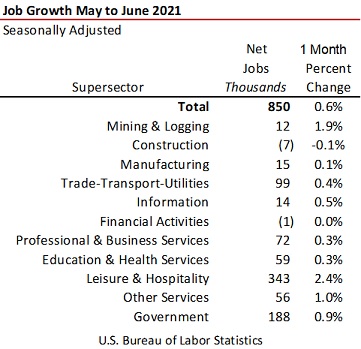 The Leisure & Hospitality Supersector still has a significant distance to return to pre-pandemic levels as shown in the graph. At the onset of Coronavirus, almost one-in-two jobs were lost in the sector-- 8,2 million from a total 16,9 million jobs in tháng hai 2020. Even after the impressive Leisure & Hospitality jobs gains seen in recent months, the sector is still 2,18 million jobs short from pre-pandemic numbers. 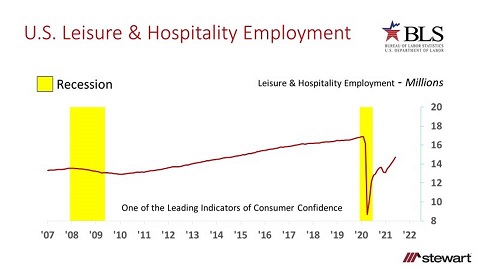 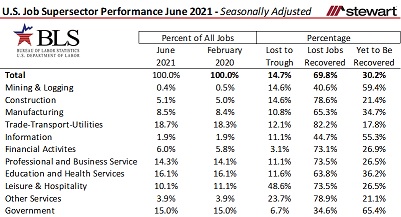 Wages have fared well for those that remained employed – except in the Mining & Logging Sector which included Oil & Gas. The next table shows the average hourly wages in June by Supersector from 2019 to 2021. Both the 12-month and 24-month spans saw an increase in hourly wages in all Supersectors. Over the 24-month span, Mining & Logging (which includes oil & gas production) was up the least at 4,3 percent. Greatest gain was in Financial Activities up 11,7 percent. The best paying sector remains Information at an average $44,53 per hour wage rate. 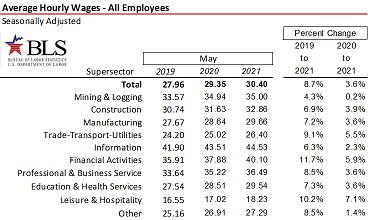 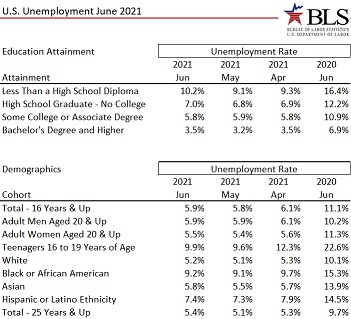 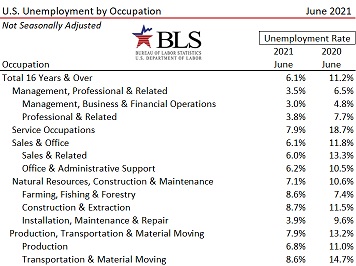 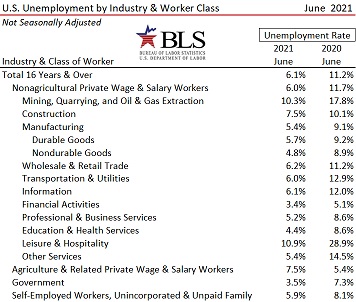 Some of the jobs shed during the pandemic are gone as businesses closed permanently. Other firms changed the way business was done to survive resulting in fewer needed employees. The pandemic and its impact on the economy continues. Those that kept their jobs have generally fared financially well. Yet some others – both people and businesses – are still struggling.

The economy is coming back, but is still short jobs-wise from pre-pandemic levels, even though GDP is forecast by the Congressional Budget Office to hit an all-time high in 2021. They see GDP growing 3,7 percent (adjusted for inflation) in 2021 after being down 2,5 percent in 2020. The CBO expects an average annual GDP growth of 1,7 percent from 2020 to 2030.