Jobs are everything to the economy. Period. The never-before-seen shut down of the U.S. economy has resulted in the greatest number of unemployed people in the history of the country. Prior to 2020, the most people in history that applied for unemployment benefits in a seven day period was 695,000 (October 1982). Since mid-March, weekly tallies are shown in the following list. The 6.65 million people applying for unemployment benefits in the week ending April 2nd was almost 10 times (1,000 percent) greater than the prior record.

Once again the TINSTAANREM axiom is invoked — There Is No Such Thing As A National Real Estate Market or economy. Every economy has differing types of jobs and economic drivers and therefor will not have equal performance. Already known that the Leisure & Hospitality sector nationwide has been the hardest hit having lost 46 percent of all jobs in April alone (and had made up almost one-in-every nine jobs prior to the downturn). The least hit SuperSectors, as defined by the Bureau of Labor Statistics (BLS), were Financial Activities and Government, down 2.9 percent and 4.1 percent, respectively, on an Unadjusted Basis. While the relative ranks of these SuperSector jobs loss rates remain the same which using Seasonally Adjusted Data, the actual job loss rate varies slightly. 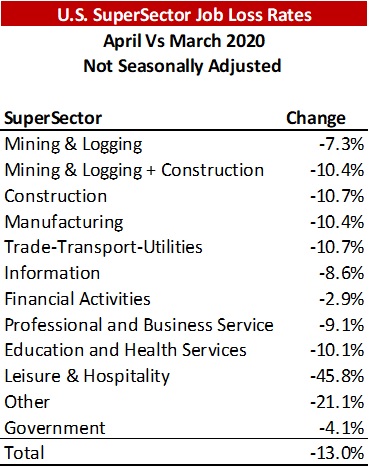 The next table sorts state job losses from least percentage to most for the month of April 2020. 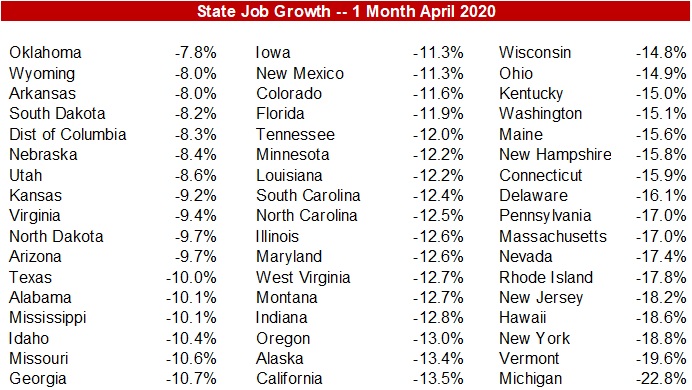 In contrast, the following table shows job growth for the 12-months ending March 2020, which had just a smidge of Coronavirus impact. While Oklahoma and Wyoming, for example, had performed very weakly in job creation in the 12-months ending March 2020, these same states were in the 10 best performing job markets in April -- with best-performing defined as those with the smallest percentage of April job losses. 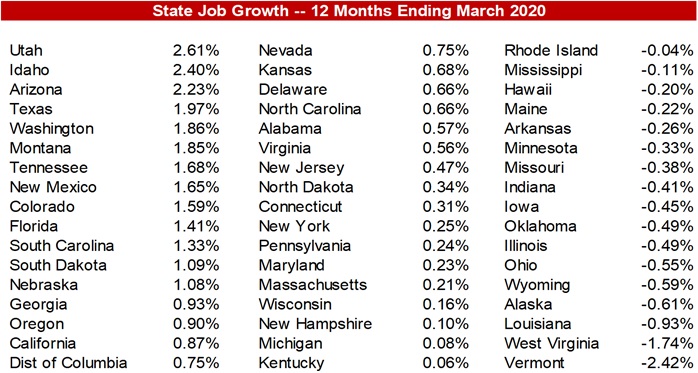 The next table shows job loss metrics by state for April, March + April, and the 12-Months Ending April 2020. 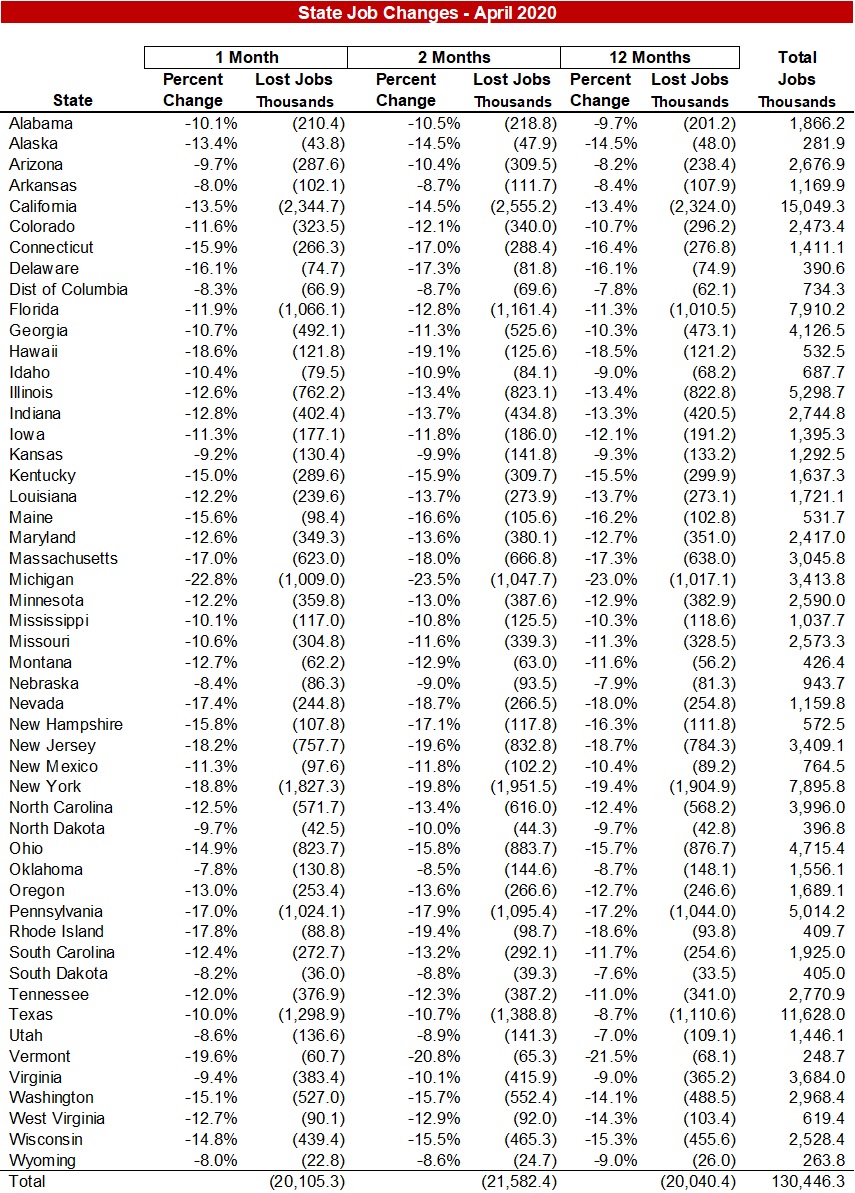 This last table details the total number of lost jobs by state, sorted from most to least in the month of April. The table also examines the comparative incidence of job losses. California, for example, had 11.5 percent of the total jobs in the U.S. and incurred 11.7 percent of the total number of jobs lost – hitting the average so-to-speak. Michigan, with just 2.6 percent of total U.S. jobs, accounted for 5.0 percent of total job losses – double expectations. Eight states make up one-half of all jobs losses, with the two-thirds in the top 14 states. 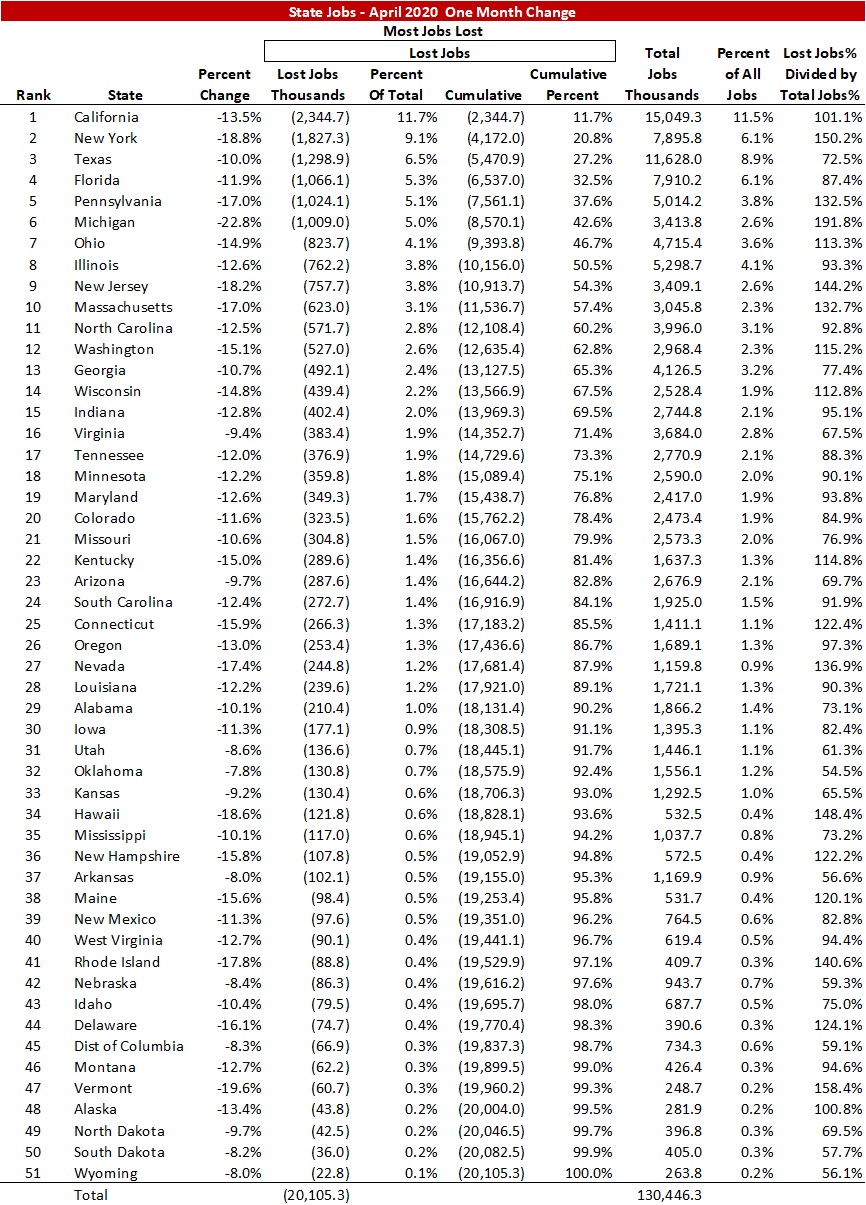 Unfortunately, there are more job losses yet to come. Worse, many of those recently unemployed have the belief that their unemployment is merely temporary until the economy opens back up. A Washington Post-Ipsos Poll conducted April 27-May 4 found that 77 percent of those laid off or furloughed expect to be rehired by their former employer (responding Very Likely or Somewhat Likely). Another Health Tracking Poll by the Henry J Kaiser Family Foundation (KFF) from April 15-20 found that 83 percent expected to get their previous job, salary and hours worked back within six months. The monthly jobs report from the BLS also found that 78 percent of the recently unemployed perceived their layoff to be temporary.

Economist expectations are not nearly as optimistic, with 40 percent the recurring estimate in the number of workers that will not be rehired. In the first table, 40.8 million Americans have applied for unemployment benefits since mid-March. If economists are correct and 40 percent will not get rehired, then 16.3 million of the recently laid off and furloughed Americans will remain unemployed, resulting in a post-pandemic unemployment rate overall around 14 percent given the roughly 6 million unemployed pre-virus.

Delaying the economic recovery is the reluctance for many of the recently laid off employees to return to work given combined state and federal unemployment benefits that are greater than prior income. The Congress-passed federal stimulus program provides an unprecedented $600 per week in addition to state unemployment benefits (through the end of July). An analysis by University of Chicago economists estimates that 68 percent of unemployed workers receive state and federal benefits that are greater than their lost earnings. They estimate that the typical (median) unemployed worker is receiving 134 percent of their original wage. In metros that have reopened, there is a shortage of workers, yet to return to work would result in reduced monthly income. Delaying return to their jobs will no doubt increase the number of businesses that permanently close, resulting in millions of long-term lost jobs. Yet some in Congress are already asking for the $600 per week federal benefits to be extended into January 2021.

Given the ongoing weekly unemployment claims in May, expect another dismal jobs report in June.