Economists expected an additional 7.5 million decline in the number of nonfarm jobs in May 2020, but the reopening of the economy saw 2.5 million jobs brought back – a swing to the positive on 10 million jobs better than forecast. Economically speaking this is the best news since the March commencement of the shut-down of the U.S. economy.

The following graph shows total U.S. jobs monthly, on a seasonally adjusted basis relying on data reported by the U.S. Bureau of Labor Statistics (BLS). In two months, essentially all of the jobs added since the trough of the great recession were lost from February to April 2020. 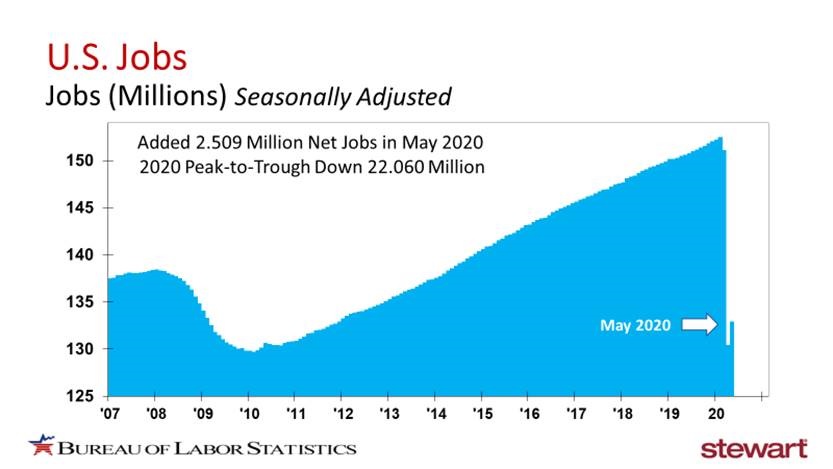 In past blogs on jobs reports, the Leisure and Hospitality Sector served as a top proxy for the overall health of the economy, stated as follows in the January 2020 blog on the jobs report http://blog.stewart.com/stewart/2020/01/14/u-s-jobs-report-december-2019-who-knew-average-would-look-so-good/

Employment in the Leisure & Hospitality sector continues to be an excellent proxy (in my opinion) of the overall health index of the U.S. economy. People do not spend money on vacations, cruises, entertainment, spas or expensive dinners out unless they feel good about the future economy.

The following graph shows total Leisure & Hospitality (millions of jobs) monthly since January 2007 along with recessions (including the ongoing downturn). From March to April 2020, one-out-of-very-two Leisure & Hospitality jobs were lost (46.8 percent or 7.54 million jobs). In May, however, 1.24 million of those jobs came back as the U.S. economy commenced reopening. 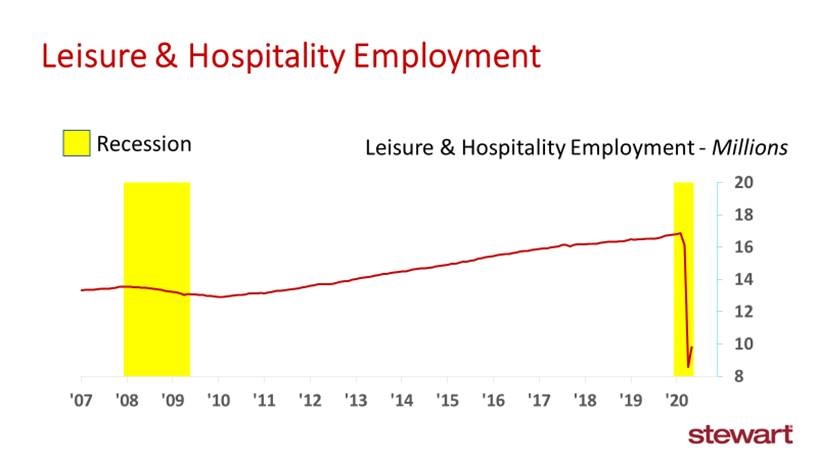 This next table shows employment data by Supersector in terms of seasonally adjusted employment numbers from April to May – in terms of thousands of jobs and percentage change. Also shown by Supersector (seasonally adjusted) are the monthly percentage of all jobs commencing February 2020 (pre-Coronavirus) through May. February is the last normal period prior to individual employment sector changes due to the pandemic. 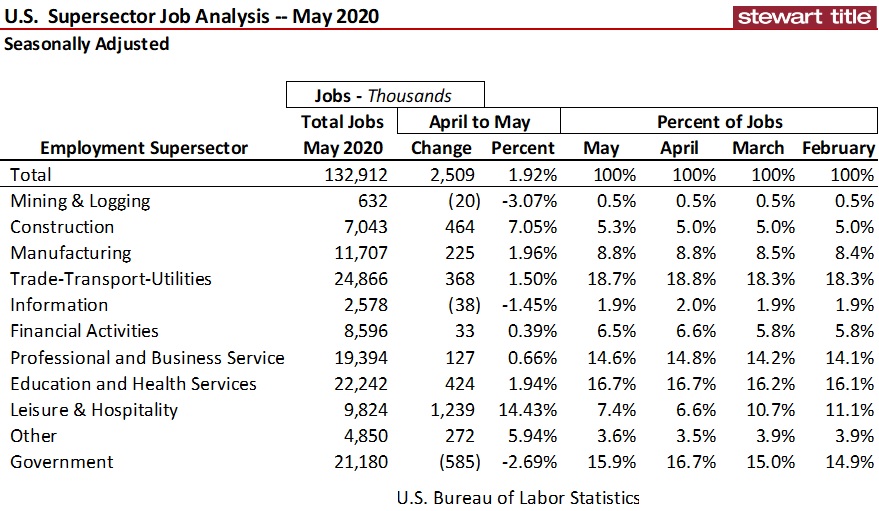 While the initial report was for an improvement from the unemployment rate from 14.7 percent in April to 13.3 percent as of May, that was essentially withdrawn due to a classification error by the Bureau of Labor Statistics in their Household Survey. People that should have been classified as Temporary Unemployed were misclassified as Employed But Absent from Work for Other Reasons. This was deemed partially attributable to the unprecedented levels of unemployment in recent months complicated by a change in survey and data collection methodology due to the Coronavirus.

See previous Stewart blog that differentiates this Survey from the Payroll Survey or Establishment Survey at http://blog.stewart.com/stewart/2020/05/22/april-2020-jobs-report-ugliest-in-our-lives-with-more-to-come/

I also have to Eat Crow, so-to-speak, as my Blog on the April jobs report was titled:

Have never been more pleased to have been incorrect. It is yet to be seen if this is going to be a V or U shaped recovery. At least the May jobs report leaves that debate alive and on the table.