Another Top-10 List -- Which States Cost the Most (and Least) for a Single Renter Retiree to Live, Social Security Benefits & Average Income Shortfall

Motley Fool analyzed a study from ScholarWorks at the University of Massachusetts - Boston that looked at the minimum income for necessities a single retiree that rents requires, breaking the numbers down by state and the District of Columbia. Costs included housing, food, transportation, healthcare and some miscellaneous spending.

Extracted were the monthly and annual shortfall in average Social Security benefits by state versus the cost of living for a single retiree.

The first table shows the states with the greatest and least cost of living for a single retiree. The three most expensive (District of Columbia, Massachusetts and Hawaii) have a cost of living that is a minimum 50 percent greater than Alabama -- the lowest at $21,504. 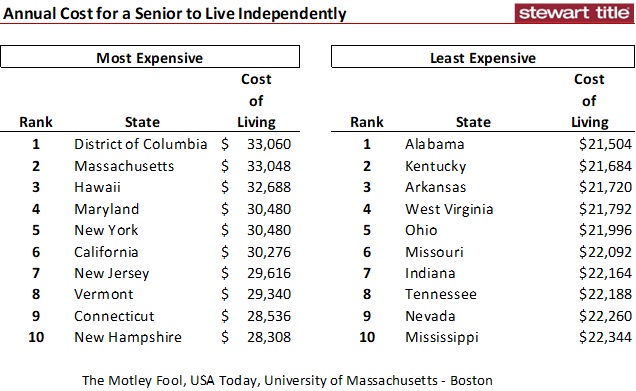 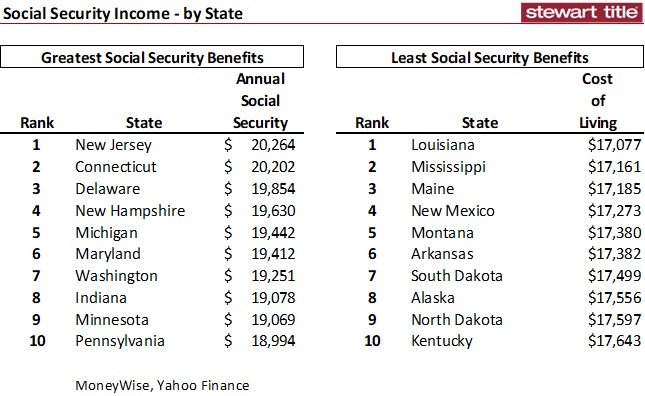 Income shortfalls (annual average cost for a retiree minus average social security benefits) are shown in the last table. The annual income shortfall in the District of Columbia was the most at $15,347 -- five times greater than Indiana with the smallest income gap. 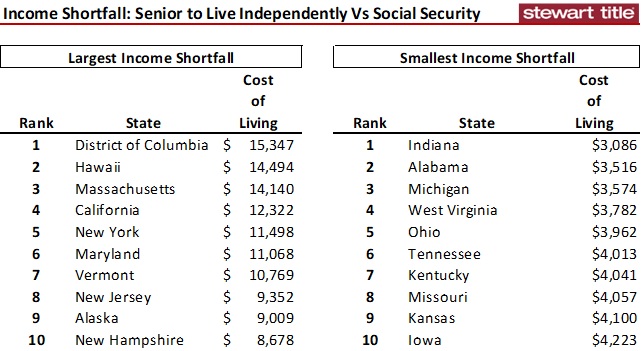 Data for all 50 states and the District of Columbia are shown in the following table, sorted alphabetically.

To read the entire article in USA Today click https://www.usatoday.com/story/money/2020/06/07/how-much-costs-senior-live-independently-state/111911324/

Social Security benefits by state can be found at https://finance.yahoo.com/news/heres-every-states-average-social-132355610.html

These are statewide averages – some locales within a state cost more and others less. Once again the TINSTAANREM axiom is invoked — There Is No Such Thing As A National Real Estate Market or economy. Not only do retirement living costs and incomes vary from location-to-location but also from person to person.

Savings are a must for retirees today just to meet minimum necessities. Low bond yields and savings rates and a declining stock market are strong headwinds against progress today – though inflation, at least for now is minimal. I do not expect low inflation to continue for an extended period of time, however.