The U.S. job market recovered 4.76 million jobs in June 2020, the largest single monthly gain in jobs in history per the U.S. Bureau of Labor Statistics (BLS). This exceeded the consensus of 3.7 million jobs from a survey of economists by MarketWatch. The unemployment rate improved to 11.1 percent in June from 13.3 percent in May. Total number of jobs in the U.S. on a seasonally adjusted basis are shown in the graph. The U.S. is still down 14.661 million jobs since the pre-Coronavirus peak in February 2020. At least for now, these data are supporting a potential V recovery. That may be curtailed, however, given the recent rise in pandemic cases. 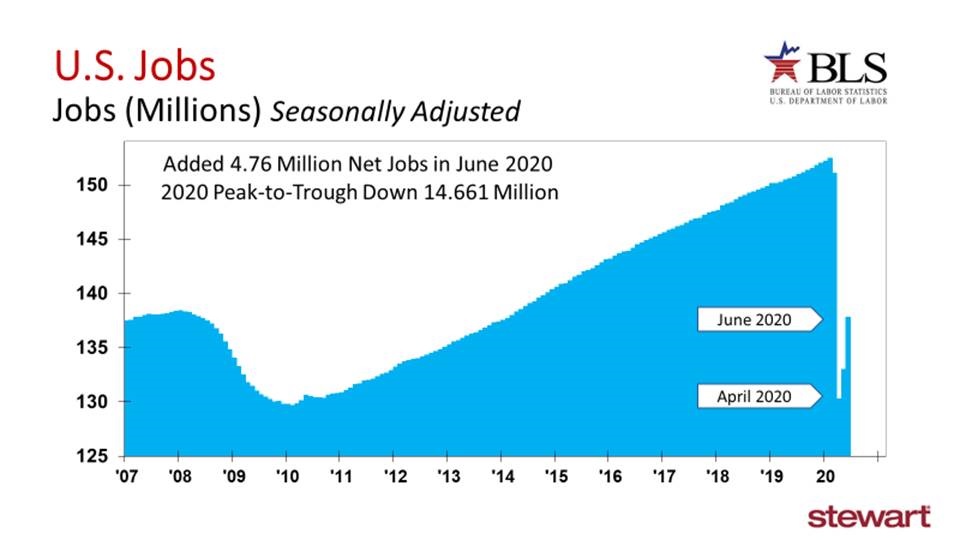 The following table shows the employment Supersectors as defined by the BLS. The first two columns detail the job gains in thousands and percentages from May to June 2020. Just one sector, Mining & Logging (which includes Oil & Gas) showed a decline, shedding an additional 10,000 jobs in June. Though Leisure & Hospitality notched the largest gain, they also had previously suffered the biggest loss, dropping one of every two jobs from March to April. The next two columns contrast the total percentage of jobs in each of the Supersectors for February (pre-Coronavirus) and June. The last column details the total number of jobs yet to be recovered since the February peak.

The massive losses in Leisure and Hospitality in March and April are shown in the next graph. Good news is the ongoing recovery – though still a substantial ways to go. 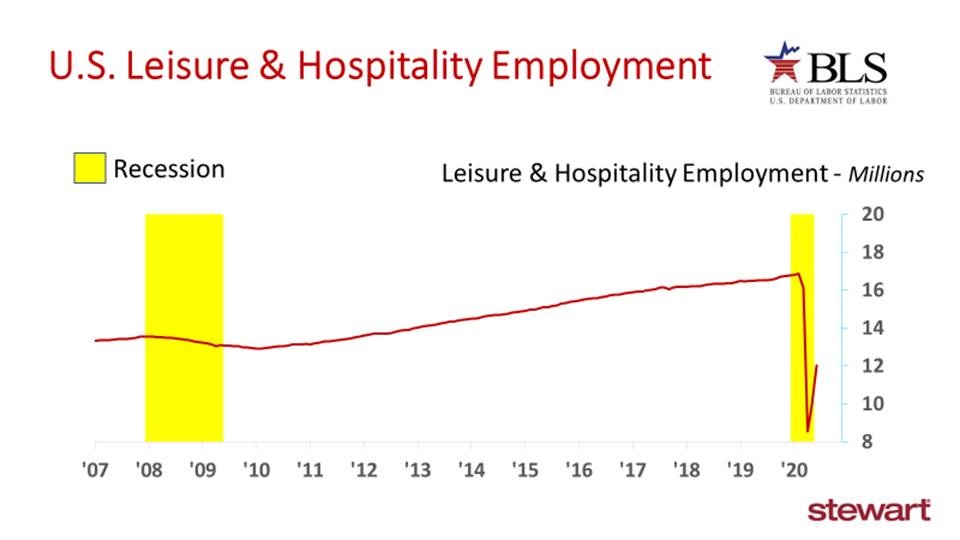 Unemployment improved in each and every demographic and educational attainment segment from May to June. The next table details unemployment for April, May and June 2020 and June 2019. 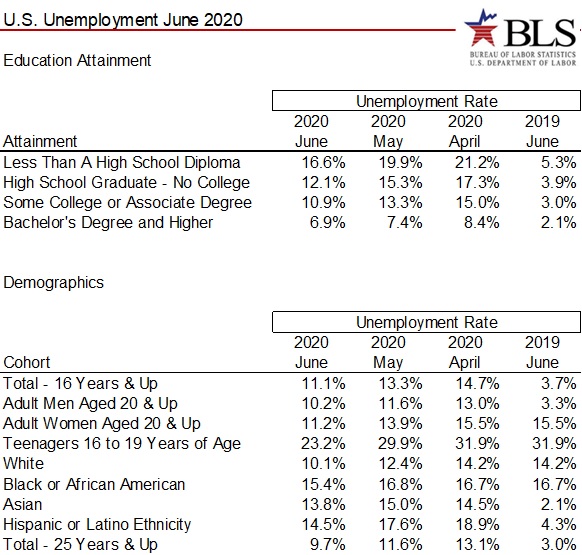 To review how the BLS completed these estimates (and the weakness inherent in the process), the following was copied from a prior Stewart Blog at http://blog.stewart.com/stewart/2020/05/22/april-2020-jobs-report-ugliest-in-our-lives-with-more-to-come/

The Bureau of Labor Statistics (BLS) is the official keeper of employment data and uses two primary approaches to count jobs and track unemployment. The first is the Payroll Survey (the tool used to estimate total jobs) and the second the Household Survey (for estimating unemployment).

Payroll Survey Designed to estimate the number employed, hours worked, and earnings for nonfarm workers along with the type of job including industry and geographic details. The survey is based on monthly polling of 145,000 businesses and government organizations representing approximately 697,000 workers. The establishments are asked to report employment for the pay period that includes the 12th of the month – hence the miss in actual employment changes for those workers with more than one paycheck each month. An estimated one-third is businesses have a weekly pay period, 40 percent biweekly, 20 percent semimonthly, and a small amount monthly. This is also known as the Establishment Survey.

Household Survey Purpose is to estimate the total labor force, employment, and unemployment rates, and other metrics along with demographic details. A monthly survey of approximately 60,000 either in-person or by the telephone is the foundation for this tool. No in-person interviews were completed in the past two months due to the virus. Individuals were counted as being Employed, Unemployed, or Not in the Labor Force. In the past month, the response rate for the household survey was around 70 percent, 13 percent less than the pre-virus norm.

To read more on the methodology of these two tools click https://www.bls.gov/web/empsit/ces_cps_trends.htm#intro

Unknown still is how much the rising Coronavirus count will deter the recovery. The economic cliffhanger continues.