It is hard to grasp that just four months ago (as of the end of February) the U.S. essentially had a normal economy. March bled a little losing 1.48 million jobs and April hemorrhaged as a record high 20.27 million Americans became unemployed in just one month. Surprising many, however, was May with 2.73 million of those jobs brought back. June recovered another 4.63 million jobs – but there are still 14.5 million of the 21.86 million jobs lost in March and April yet to be restored.

Some of the jobs, however, may not return as many businesses simply can no longer economically hang on. Dining establishments are high on that list. The Independent Restaurant Coalition estimates that as many 85 percent of the independently owned restaurants may permanently close as a result of the pandemic. Since independent restaurants make up 70 percent of U.S. eateries, the potential is for one-out-of-every six eating places to close.

Given the mix of jobs, levels of shutdowns, and incidence of Coronavirus, each state has differing levels of losses and recoveries. Good news for June was all 50 states and the District of Columbia recovered some of the jobs lost since the pandemic hit.

The following table shows the states with the greatest and fewest percentage of jobs lost at the peak since the February 2020 baseline. The range is extreme, with Michigan having lost almost one-out-of-every four jobs, to Oklahoma suffering a one in 12 loss rate. 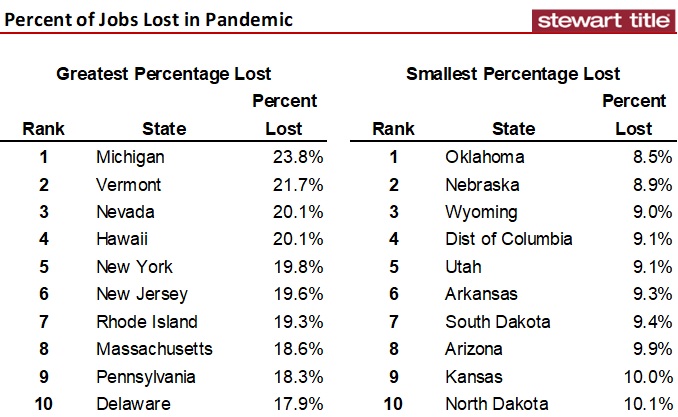 The next table shows the states that have recovered the greatest and least percentage of jobs lost since the pandemic. Some states are more advanced in recovery of lost jobs, with Idaho, Montana, Tennessee, West Virginia and Utah at 50 percent or more and Indiana and Mississippi just a frog’s hair from the half-way point. North Dakota, the District of Columbus and Hawaii have the lowest recover rates, coming in at 10.1 percent, 10 percent and 9.9 percent, respectively. Hawaii’s ongoing 14-day quarantine for all entering people has shuttered many of the businesses but has limited the spread of Coronavirus. Total number of new cases in the island state the past seven days were 28, 19, 23, 20, 27, 12 and 25 per day. 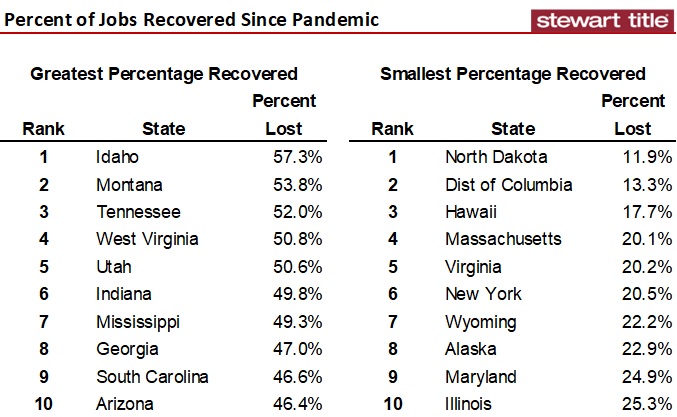 The next table shows these data for all 50 states and the District of Columbia sorted by state. Included also is the percentage of all jobs in the country, by state.

Click here for a PDF of state-by-state job gains for one-month, two-months, and 12-months along with the total number of jobs as of the end of June 2020.

Monthly state employment data can be sliced and diced in more ways than Bubba Blue told Forrest Gump in how you can cook shrimp. No matter which recipe we use to look at these data, however, there is a lot of recovery yet to be accomplished.