Despite 10 million more unemployed workers in July 2020 compared to February of this year, existing home sales posted the best sales level seen since December 2006 -- the peak of the housing bubble. Existing home sales rocketed up 24.7 percent in July 2020 on a seasonally adjusted annualized rate (SAAR) versus the prior month and were up 8.7 percent on a year-over-year basis as reported by the National Association of Realtors® (NAR). Raw non-adjusted sales totaled 597,000 in July, the most seen in a single month since June 2017. The monthly median sales price of $304,100 set an all-time monthly record – the first time to hurdle the $300,000 level.

Sales are presented in two perspectives in the following graphs. While each shows monthly median price, the first shows sales on a seasonally adjusted annualized rate while the second uses the total number of sales closed in the prior 12-months. After plunging more than 32 percent on a SAAR from February to May, sales ignited from the May trough to July, growing 49.9 percent. Though June historically tops annual monthly median prices, the delayed market and strong demand for the limited inventory of homes available for sale saw the crown for top price handed to July – at least for now. 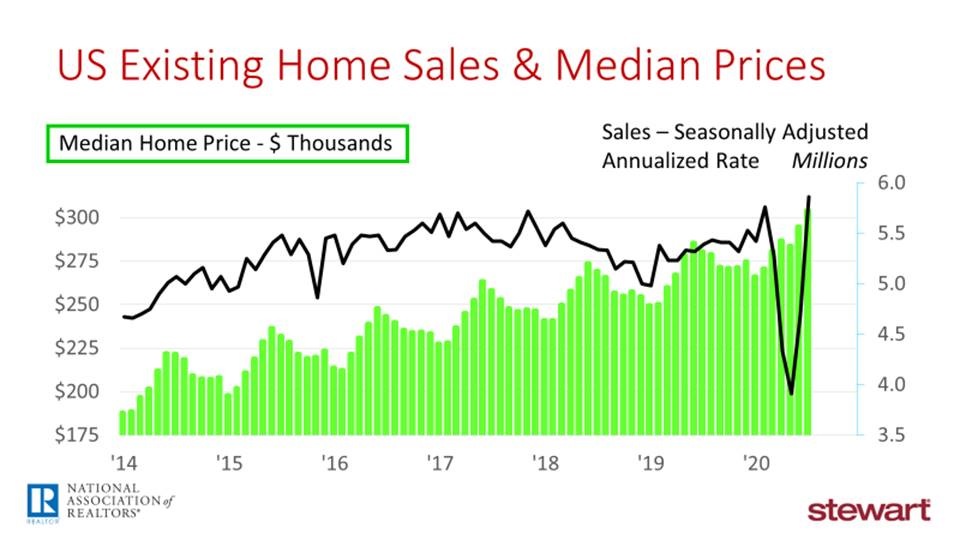 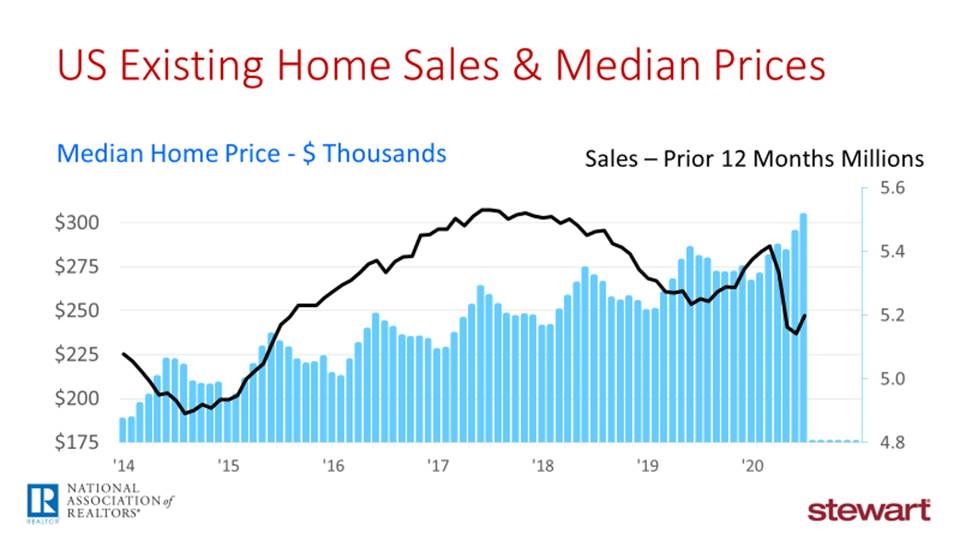 Raw unadjusted sales are shown monthly commencing January 2018 in the following three bar graphs. The first shows total sales including single family, townhouses, co-ops and condominiums. Total existing home sales were up this July 10.6 percent compared to a year ago but were down 4.7 percent year-to-date through July.  The second graph shows these data for single family closings, off 3.5 percent year-to-date but up 11.6 percent versus the same month a year ago. Condo and co-op sales are shown in the third. While Condo and co-op sales had shrunk significantly in April and May --  earlier along the pandemic timeline -- they have since returned to a more typical level as understanding and knowledge about Coronavirus has emerged. 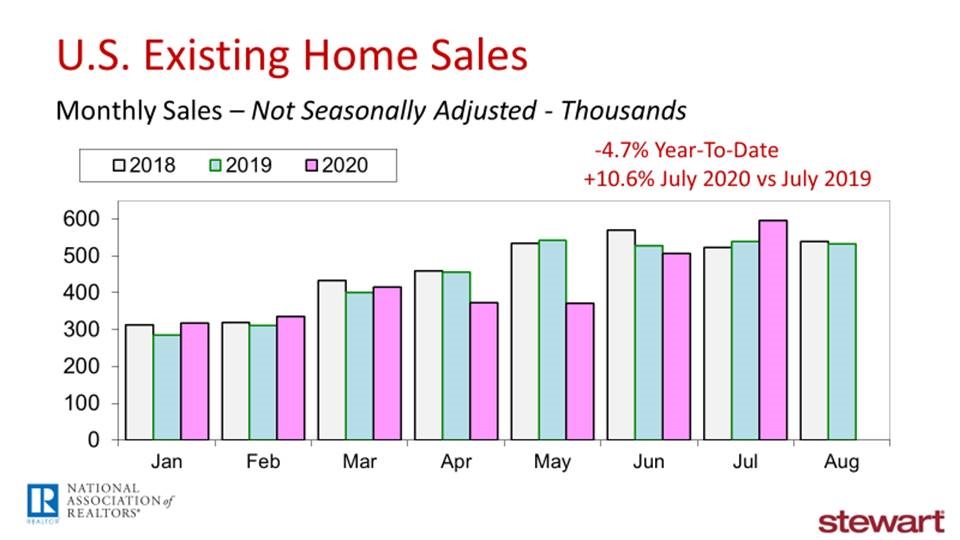 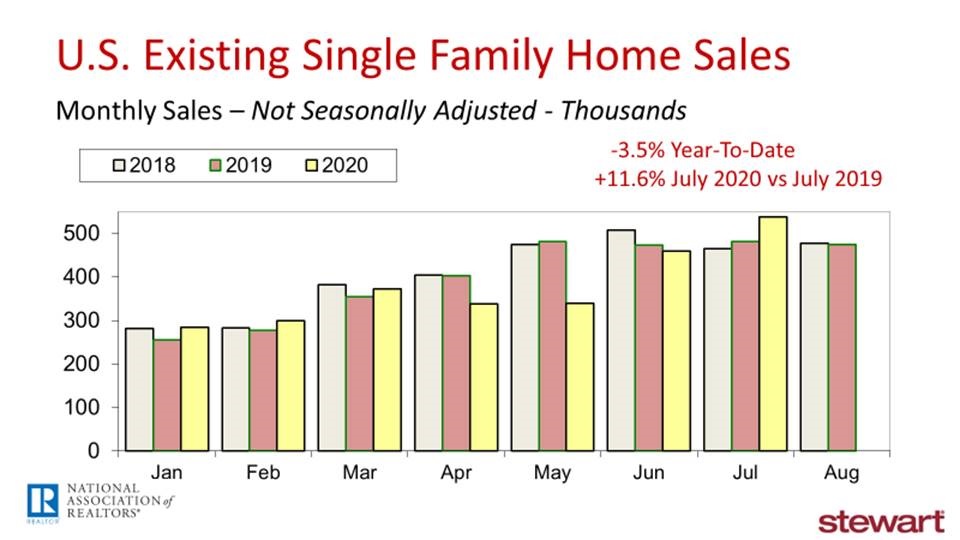 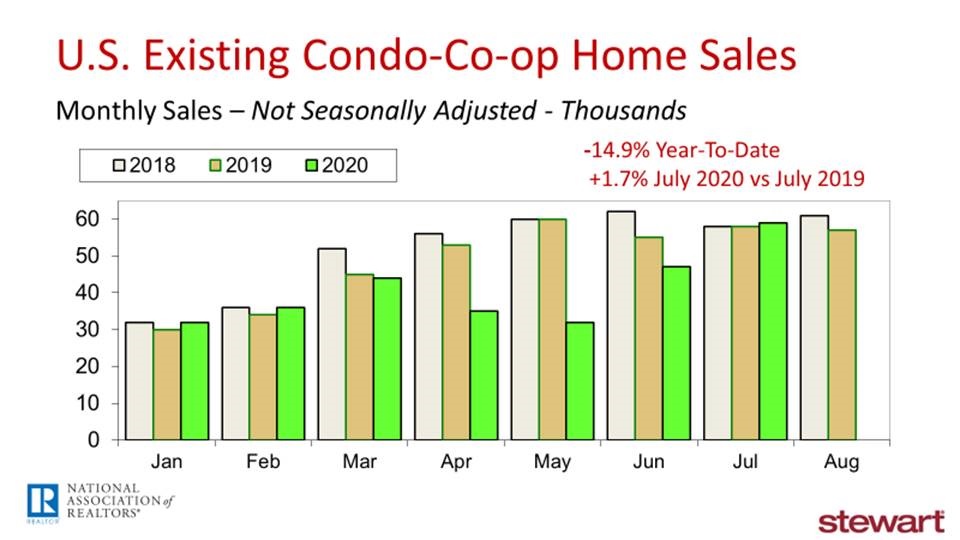 As households have spent added time at home since the start of this pandemic, the house itself has become more important to their lifestyle and quality of life, escalating the demand for homes. A growing economy is required for home sales to be sustainable at this level. That is uncertain given the record level of unemployed, expiration of government stimulus programs and yet-to-be seen business bankruptcies and closings. So goes jobs, so goes the demand for housing.  Jobs, or the lack-there-of, control the future of housing.