State Job Recovery Rates as of July 2020 -- Not Yet There

Ordinarily the key metrics focused on each month when analyzing employment data are the percent change in the total number of jobs in the prior 12-months and perhaps in the past one-month. In the current Coronavirus world that changes to how many more jobs need to be brought back or recovered just to return to job levels prior to the pandemic -- i.e. as of February 2020.

Not all types of jobs suffered equivalent declines in the downturn. The table below shows the percentage of U.S. jobs by Supersector as of February 2020 – pre-Coronavirus. The second column shows the percentage of jobs lost in the Supersector from the February 2020 baseline to the employment trough. The Financial Activities sector suffered the smallest losses, dipping just 3.2 percent of jobs, contrasted to one-in-every two jobs (49.3 percent) lost in Leisure and Hospitality, the hardest hit sector. 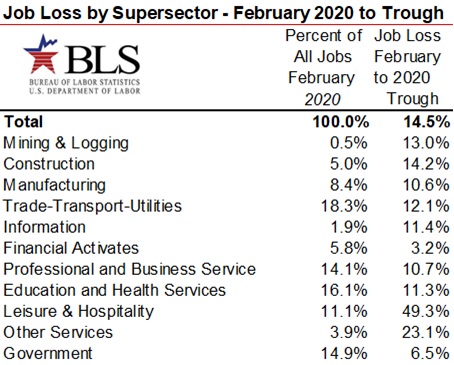 Since each state has a differing mix of job types, virus-related job losses varied across the states. Not all states were impacted equally by Coronavirus infections, nor did all states respond in a similar manner with restrictions on businesses to contain the virus, yielding a more diverse job loss rate. The following table shows the 10 states with the largest and smallest percentage loss of total jobs from the February 2020 baseline to the April trough as of July 2020, based on the latest data from the U.S. Bureau of Labor Statistics (BLS).  Comparison data used seasonally adjusted numbers allowing comparison across all months. Each of the 50-states, based on the latest revised data, hit a 2020 low in employment for the March to July period in April. North Dakota posted the lowest job loss rate, where just one- in-12 people lost their jobs (8.5 percent).  Michigan topped job losses with almost one-in-four people with jobs in February 2020 (23.8 percent) becoming unemployed by April. 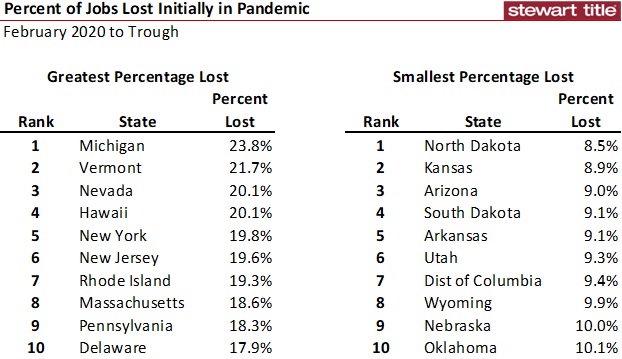 Not surprisingly, job recoveries since the April trough varied across the states, with the 10 states each showing the best- and worst-job recovery rates as of July 2020 shown in the next table.  Idaho tops the list of recovered jobs as a percentage of jobs lost from February to April, bringing back or recovering three-out of-every-four jobs that disappeared (75.3 percent). Massachusetts recovered the least, having recouped less than one-in-every-six jobs lost (just 14.8 percent). 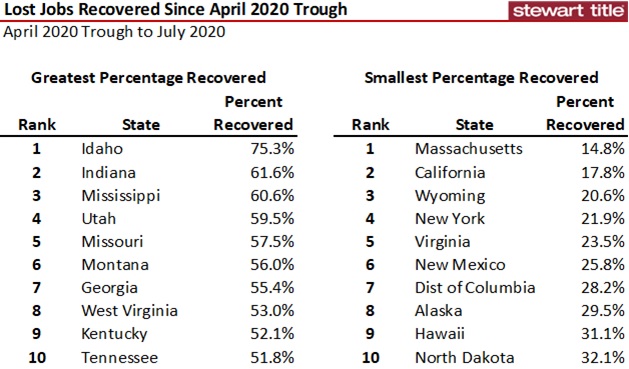 Perhaps the best measure of the overall impact of Coronavirus on each individual state economy and combined recovery (at least through July 2020) is the percent of people that had jobs as of February 2020 that remain unemployed. Topping the list best overall is Idaho, which was down just 2.7 percent in the total number of employed workers as of July 2020 when compared to February.   That means that for every 1,000 jobs that existed in Idaho prior to the pandemic, there were 973 total jobs as of the end of July – down just 2.7 percent. Nevada, on the other hand, had just 835 total jobs for each 1,000 employed as of February, off 16.5 percent.  In each of the worst ranked states, at least one-out-of-every 10 workers, on average, that had a job in February remained unemployed as of July. That is a sobering statistic. 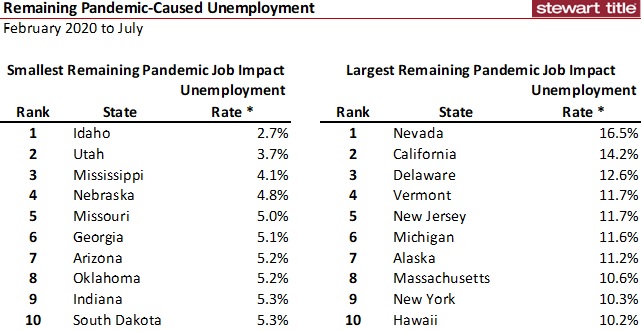 Metrics discussed above are shown for all 50 states as detailed in the following chart as of July, sorted alphabetically. 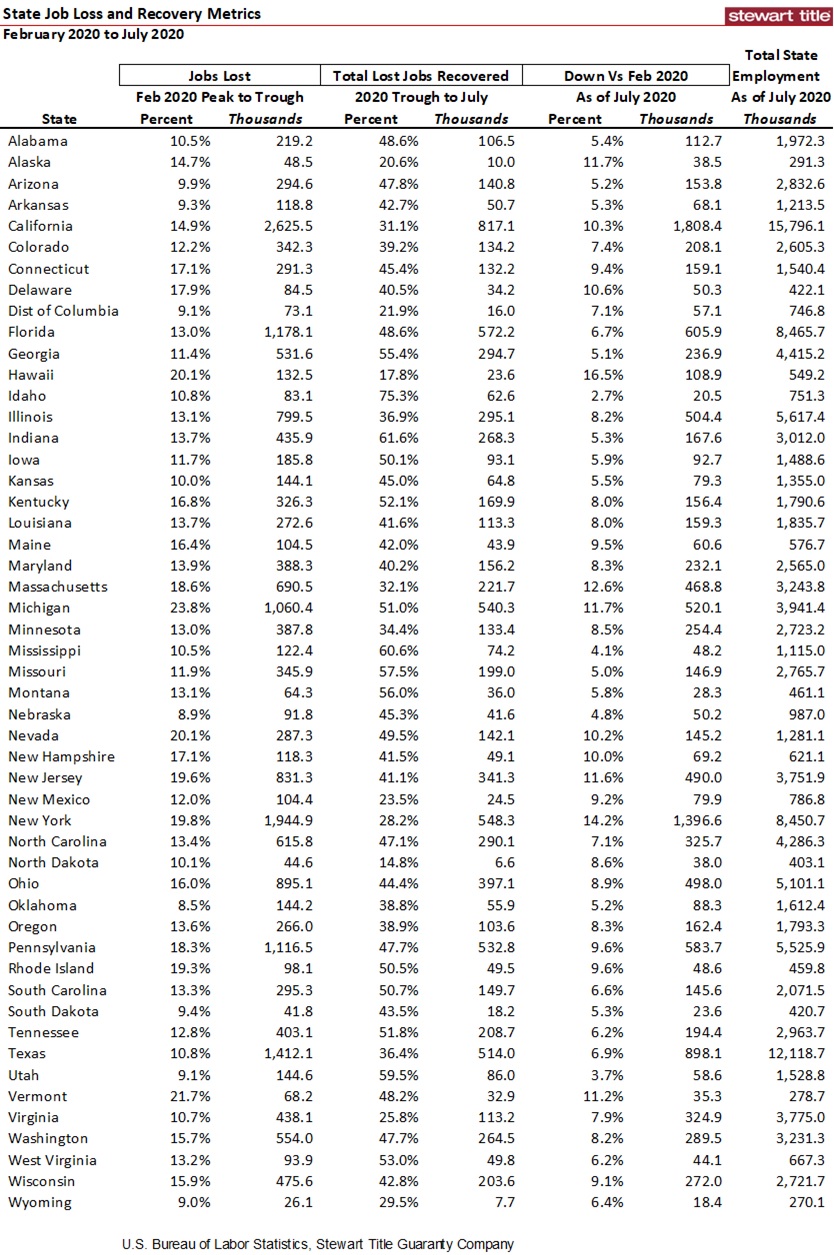 A few states may see the best job numbers for 2020 in the BLS’s August jobs report to be released September 18, 2020. Others may not recover for years. Certain types of jobs may not return in even a decade as the U.S. economy evolves in the types and locations for employment. Finally, just because a state may recover the number of jobs lost due to the pandemic does not mean that all people got their jobs back. The type of job, required skill set and evolution of the type of economy the U.S. has will be determining factors.