The Bureau of Labor Statistics (BLS) reported today the U.S. recaptured another 1.37 million jobs in August 2020, nicely above the 1.2 million consensus from economists polled by MarketWatch. The unemployment rate fell significantly from 10.2 percent in July to a preliminary 8.4 percent, better than even the year-end expectation by the Federal Reserve.

U.S. total employment is shown in the following graph on a seasonally adjusted basis. The past two months of gains have slowed but remain positive. The U.S. lost a total 22.167 million jobs from February to the April trough, recovered 10.61 million through August, but is still 11.55 million short of pre-pandemic numbers. 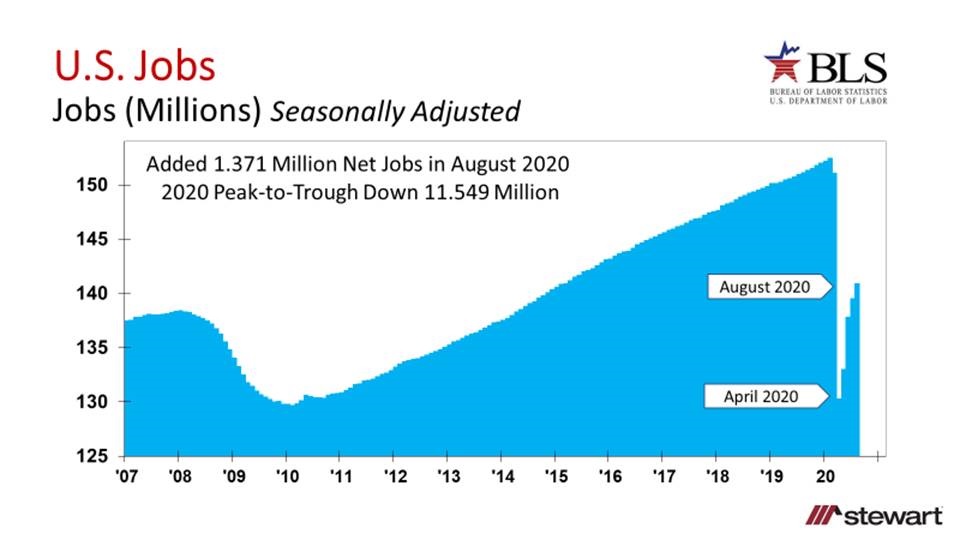 Employment in the Leisure & Hospitality sector is viewed as a leading indicator of consumer confidence and hence the health and direction of the U.S. economy.  Jobs in the sector are shown in the graph along with times of recession and assumes the 2020 recession ended in June. The strong recovery posted in June continues to be positive but has slowed the last two months. While the recovery initially looked like a V shaped comeback, it now appears to track a check-mark or lowercase r-shaped recovery.  If Leisure & Hospitality employment truns negative, then the U.S. may be headed into a double-dip recession as the stimulus programs spending expires. 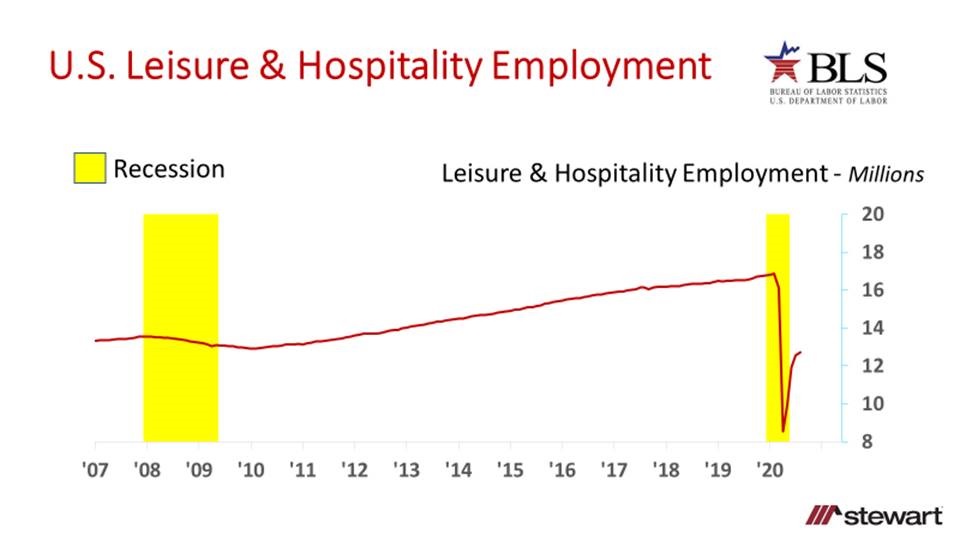 A summary of the Supersector job numbers (as delineated by the BLS) are shown in the table. Mining & Logging (which includes oil & gas) was the only Supersector to shed jobs in August, cutting 2,000 workers. Government and Trade & Transportation were the largest gainers, each adding more than 340,000 jobs.  Leisure & Hospitality still has more than 4 million jobs to recoup, but that may not be achieved for years as expectation for business travel to return to normal is at least 2023.

Examination of average hourly wages leads to the conclusion that the pandemic has been more damaging to lower income workers – those that can least afford the hit.  The table shows the monthly average hourly wage for 2020. Wages rose from January to February due to a growing economy as more workers than ever before forced employers to be competitive in hiring and compensation. Even though the U.S. lost 22.2 million jobs from February to April, however, average hourly wages rose from $28.52 per hour to an all-time record $30.03 per hour in April. The wage increase was due to fewer lower-paid workers which simply raised the average overall rather than workers receiving greater compensation.

The less educated have been more impacted by the economic downturn and resulting job losses, as shown in the comparison of unemployment rates by level of education attainment. Those with only a high school diploma are almost twice as likely to be unemployed than those with at least a Bachelor’s degree, with unemployment rates of 9.8 percent and 5.3 percent, respectively. The Federal Reserve in the past has used an overall unemployment rate of 5.0 percent to 5.5 percent in the U.S. as an indicator of full employment, with the 3.5 percent level seen in February of this year indicative of an overall worker shortage that slowed potential economic gains. 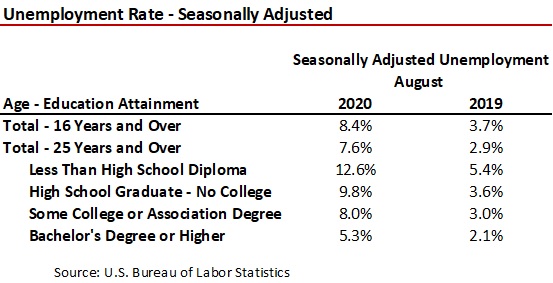 Unknown is whether the U.S. economy will continue to grow or slip into a double-dip recession. While many sectors continue to add jobs, others are preparing to accelerate layoffs as the forgivable loans under the Payroll Protection Plan run out of funds.

Jobs are everything to an economy. Period.