Jobs are everything to the economy and the ultimate demand for real estate.  Period. Unfortunately, not one single state has yet to recover the total number of jobs lost since February 2020 – the baseline prior to the pandemic.

The Bureau of Labor Statistics (BLS) monthly reports employment data for the nation, states and Metropolitan Statistical Areas. The analyses and summary tables attached are based on BLS state employment data as of August 2020 using seasonally adjusted data.

Good news is that just two states, Oklahoma and New Mexico, posted a decline in jobs comparing July to August, 2020. New Mexico saw a 0.5 percent drop while Oklahoma dipped a miniscule 0.1 percent. Three states were unchanged (Tennessee, Hawaii and Alaska) while all the other states and the District of Columbia reported gains, as shown in the following table 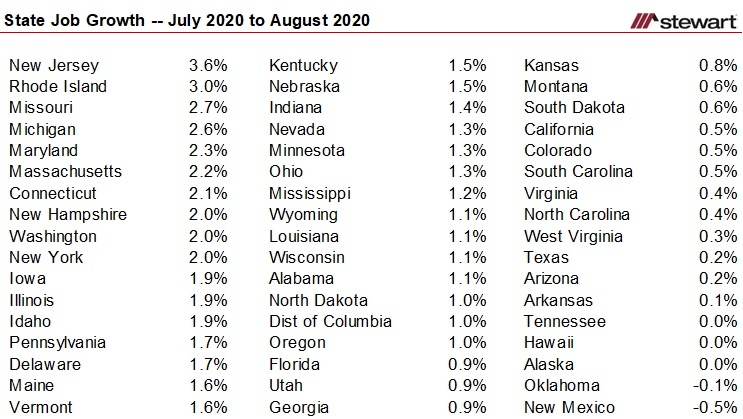 While this is referred to as job growth from July to August, in reality it is merely the recovery of jobs lost since February prior to the pandemic. Many of the better-ranking states from July to August were also among the states with the greatest percentage of job losses from February to the trough. Total job losses from February 2020 to the trough are shown in the next table, ranked by the greatest percentage of jobs lost. Michigan, which lost almost one-in-four jobs (the most) ranked 4th best in July to August job gains. 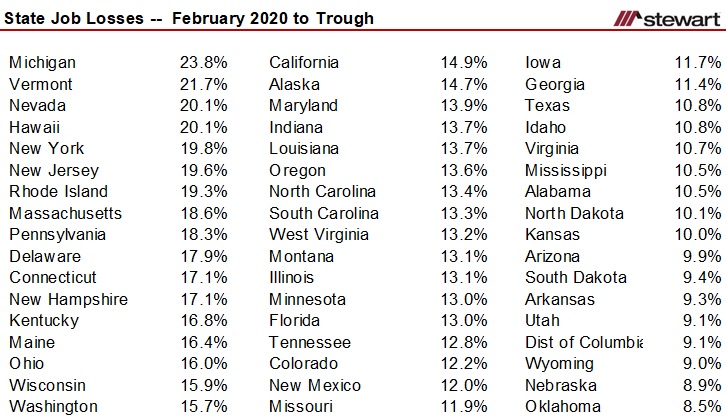 The relative percentage of jobs recovered by August from those lost since February (pre-pandemic baseline) through the trough (the month of which varies by state) are shown in the next table.  Idaho has now brought back 83.6 percent of the number of jobs lost to the pandemic, even though they ranked 14th best in the least percentage of total jobs lost. Not only did Hawaii rank 4th worst overall by losing one-in-every-five jobs (20.1 percent) from February to the trough, they also have recovered the smallest percentage of jobs lost, having gained back just 16.6 percent. The two-week required quarantine for all arriving in the Aloha state has essentially shut down the Leisure & Hospitality industry, a major component of the island’s economy. Further shutdowns and restriction continue to impede the Hawaiian economy.   In Oahu, for example, the mayor has closed all beaches, hiking trails, parks and restricted all individuals on the island from leaving their home other than for essential activities, and that all businesses be closed except for those providing essential services. 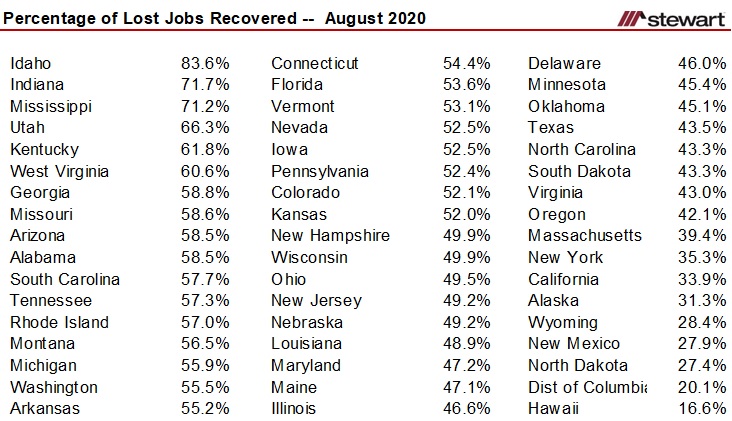 Overall unemployment rates (not seasonally adjusted and preliminary) per the BLS as of August for Idaho and Hawaii were 12.5 percent and 4.2 percent, respectively.  This shows the weakness in how unemployment rates are calculated. Based on the total number of jobs in February (as a baseline) and the current number jobs, the unemployment rate for Hawaii just from the pandemic is 16.8 percent, yet the overall unemployment rate as of August for the entire state was 12.5 percent. Some can be explained by people moving out of Hawaii (reducing the numbers in the workforce) and in the methodology in how the unemployed are measured. Following are the employment numbers for Hawaii pre-pandemic, trough and current. 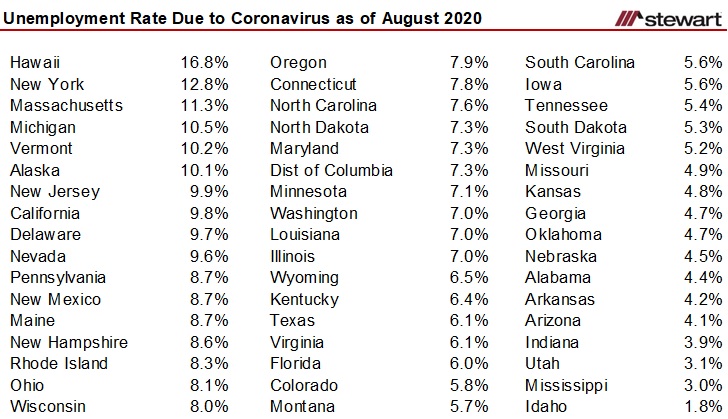 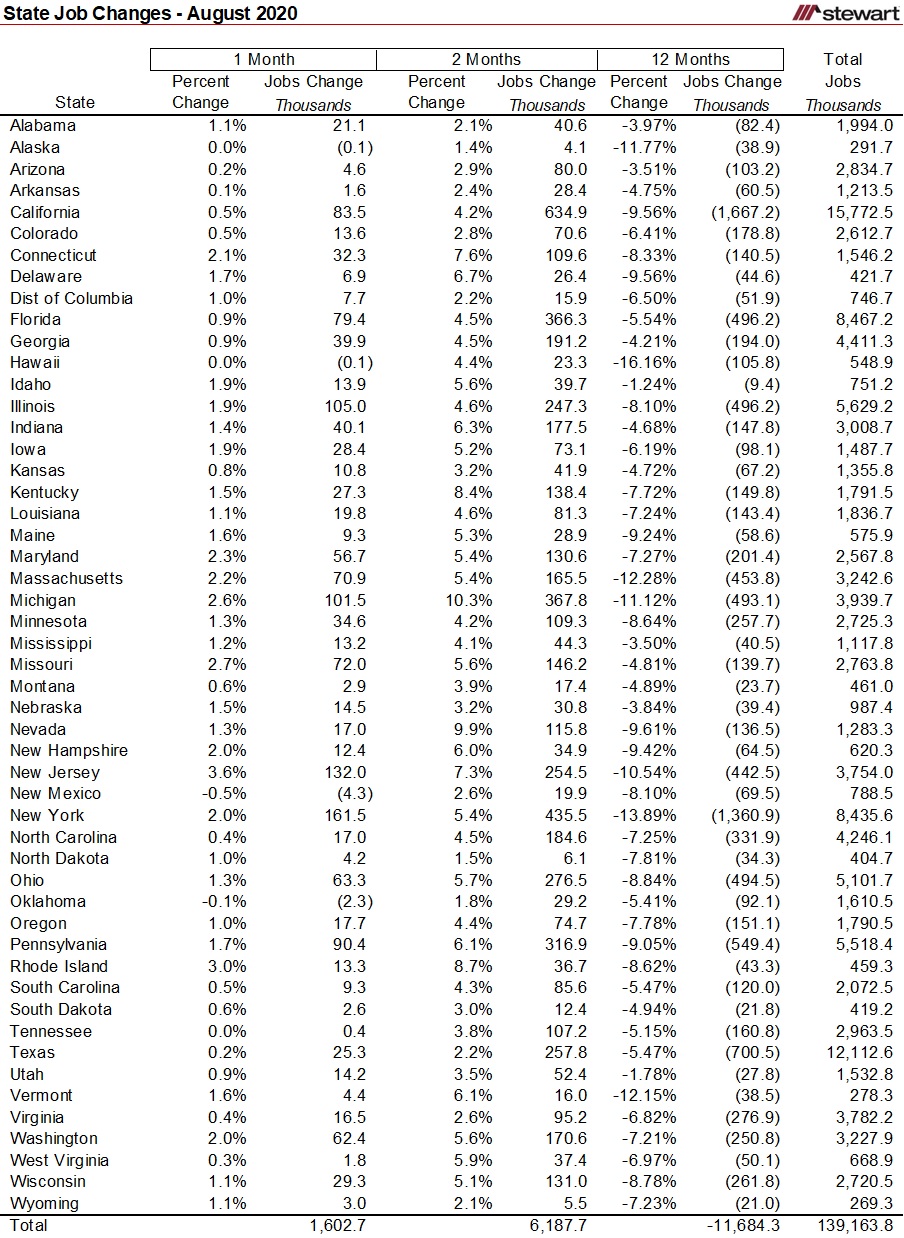 While the employment situation has been improving, I would not expect total recovery for several years given the number of businesses that may not recover from this downturn.  Look at the airline industry which is just now announcing major layoffs even though industry capacity has been less than 30 percent since April. As shown in the Hawaiian unemployment rate, true job losses are underestimated. The political chess game being played in Washington, DC, is a stalemate, with no sight of any economic stimulus prior to the election.  A double-dip recession is possible.

As the infamous philosopher (and baseball player) Yogi Berra said, “It ain’t over till it’s over.”

I guess this is not “Play it again Sam”, but rather “Say it again Yogi.”