Jobs are everything to an economy. Period.

Ordinarily when analyzing the monthly employment statistics, the focus is on growth from the prior month and in the past 12-months. That all changed in the months since the pandemic.  Key metrics post-pandemic (up until now) included:

Good news is that a handful of Metropolitan Statistical Areas (MSAs) registered an increase in the prior 12-months in the total number of jobs -- just like new plants sprouting out of the blackened landscape after a wildfire. Ten MSAs posted job growth in the 12-months ending August 2020, out of the 380 on which the Bureau of Labor Statistics (BLS) releases monthly employment on a seasonally adjusted basis. The first table shows the 40 MSAs with the best 12-month job change.  Within the top 20, 10 showed year-over-year gains in jobs, two broke even, and eight posted less than a 1 percent decline. The positivity of these numbers is magnified when considering the U.S. lost 22.16 million jobs from February to April making up of 14.5 percent of all jobs and has yet to recover 11.5 million. The top-40 markets are all smaller in relative size, with Boise, Idaho the largest with 346,600 total jobs – and now shy only 300 jobs compared to August 2019. 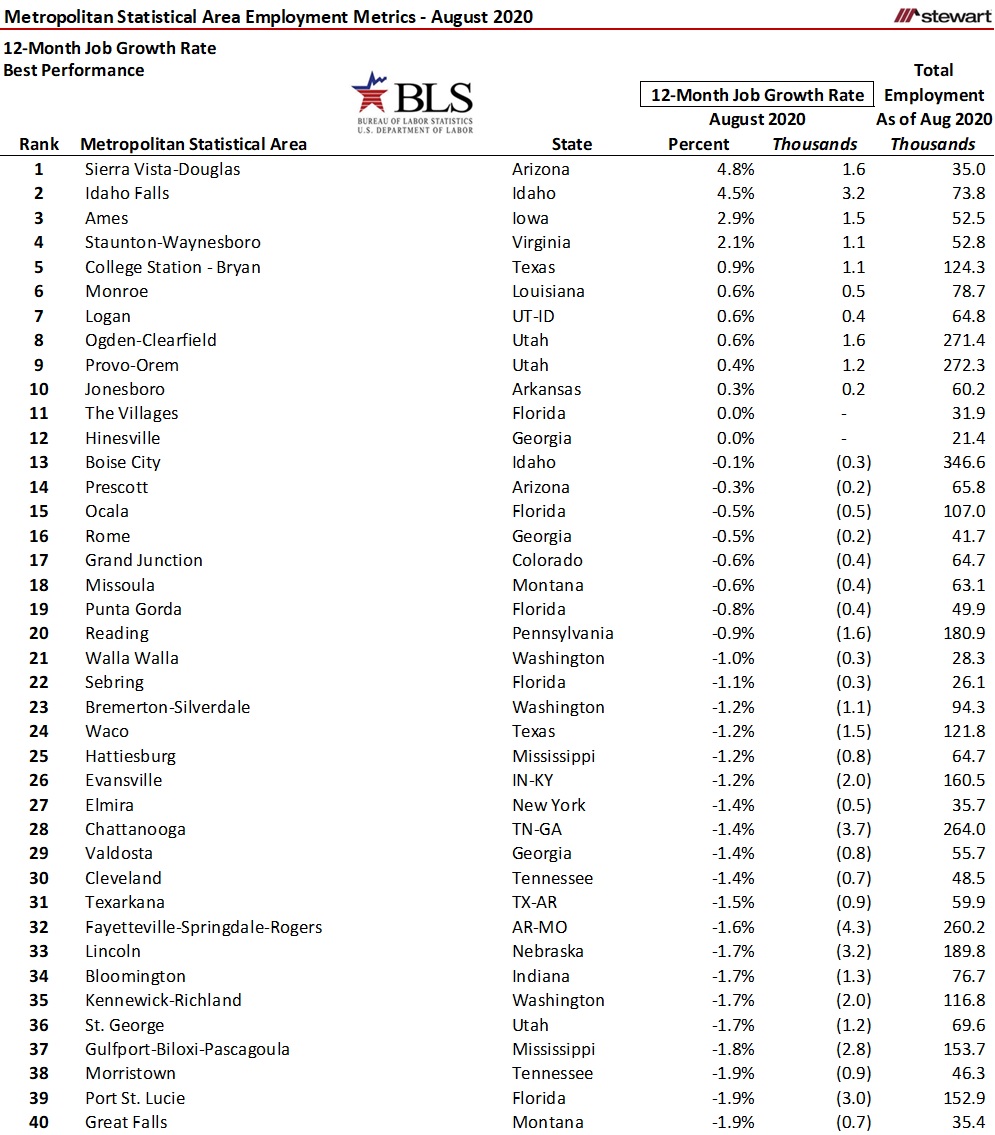 The 40 worst-performing MSAs in 12-month job performance are listed in the next table.  Included in this group are Leisure & Hospitality oriented metros, energy towns, and several larger cities. Almost one-half (19 of the 40 worst performers) are located in the 10 states ranked by the Tax Foundation as having the worst business tax environments. See http://blog.stewart.com/stewart/2019/11/23/best-states-to-do-business-tax-wise-in-2020/ 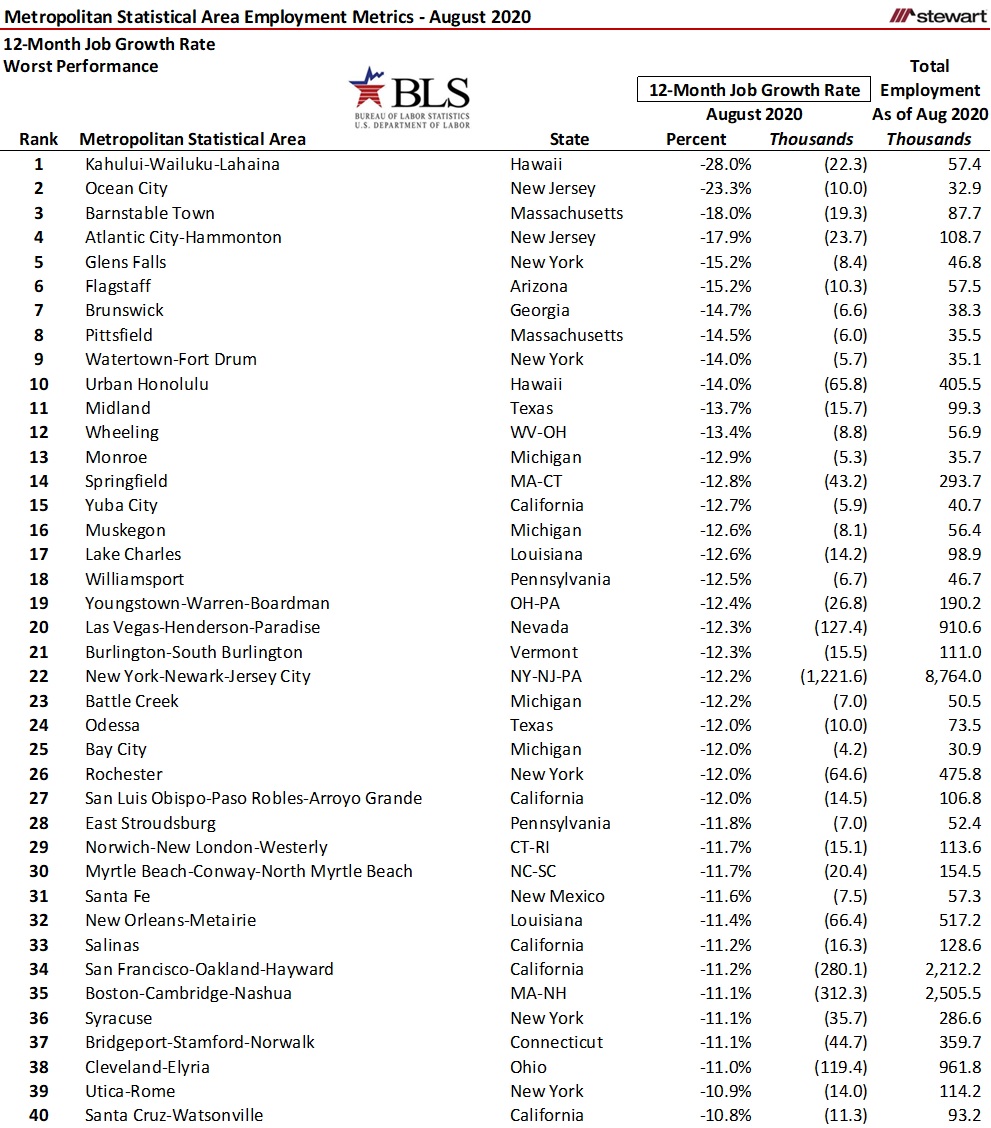 The next two tables show the MSAs having the largest and smallest percentage loss of jobs from the pre-pandemic February baseline to the their respective job-numbers trough. Among the 40-MSAs with the greatest percentage decline in jobs, the Leisure & Hospitality sector (hardest hit in the pandemic) was a material employer in many of the metros on the list. 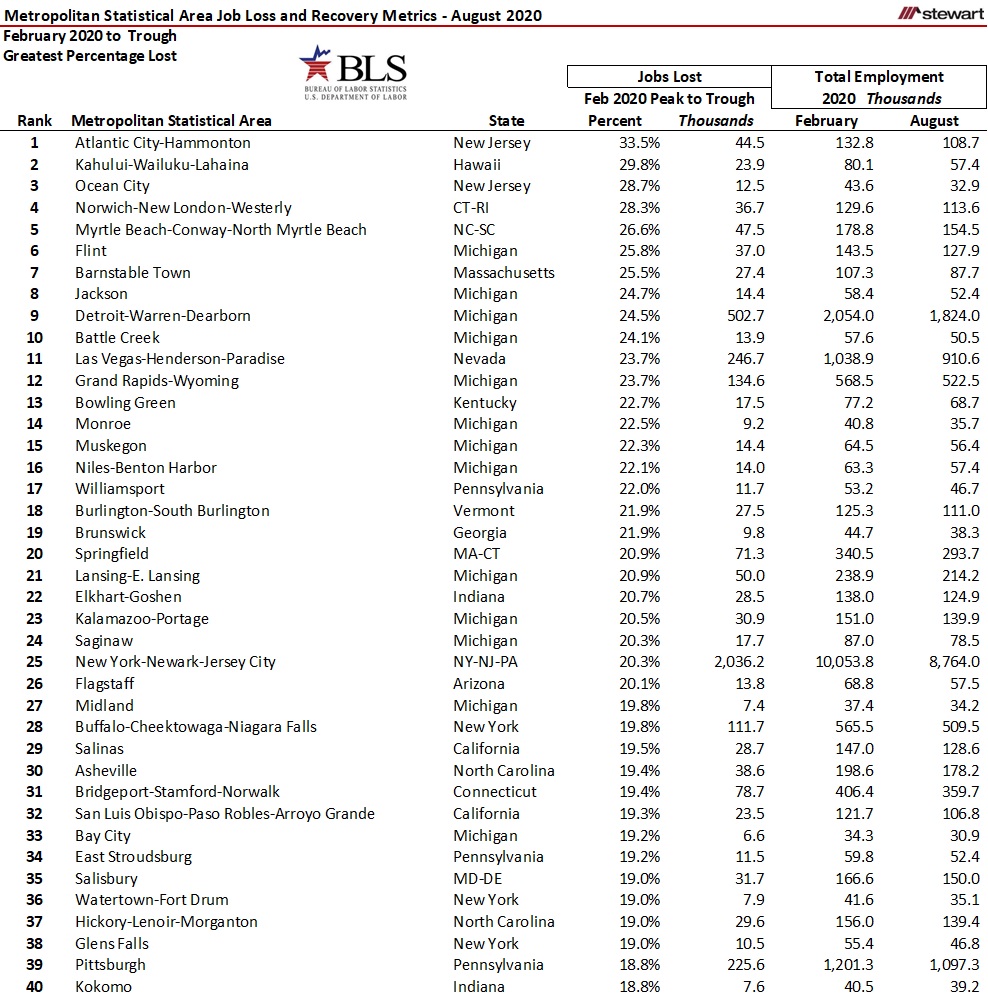 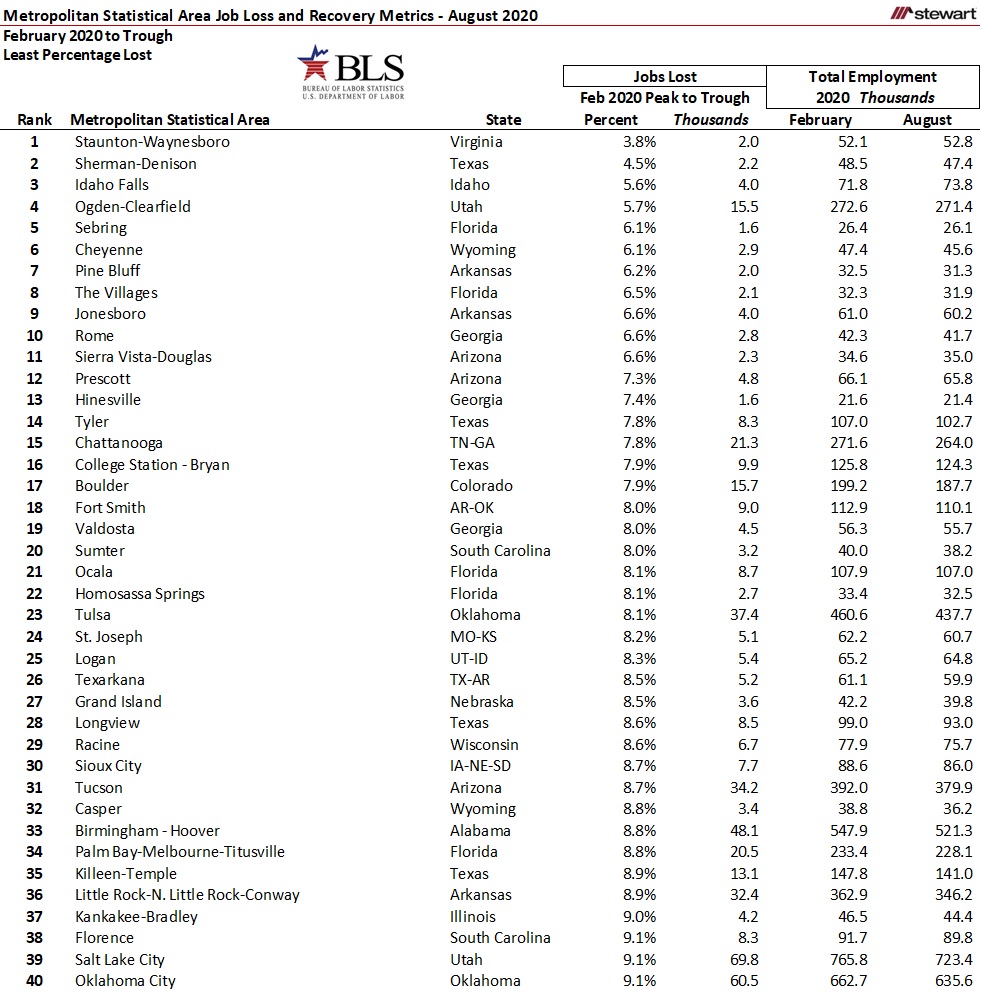 Just four metros had more jobs as of August 2020 than the pre-pandemic baseline in February:

Two others are within 3 percent of the February total: 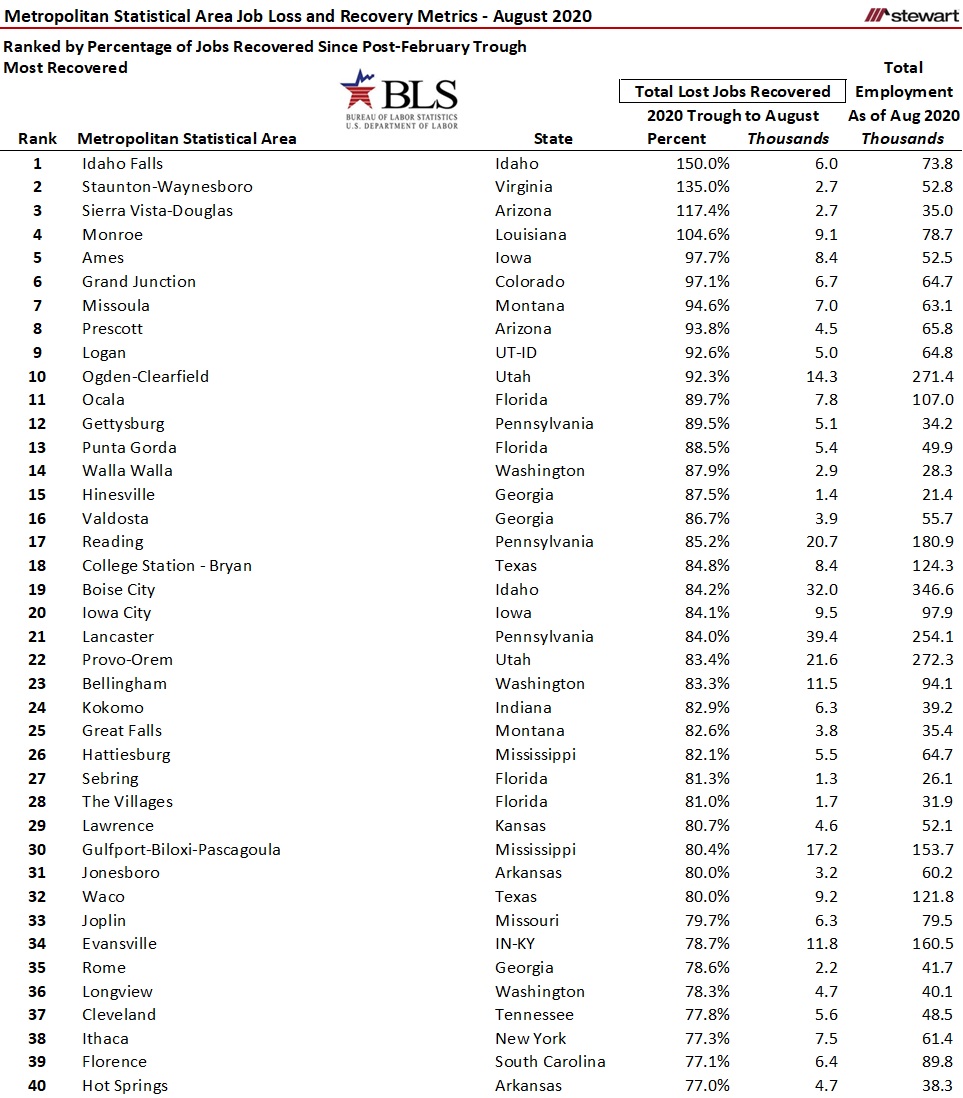 The 40 MSAs with the least percentage of jobs recovered since the 2020 trough are listed in the next table. 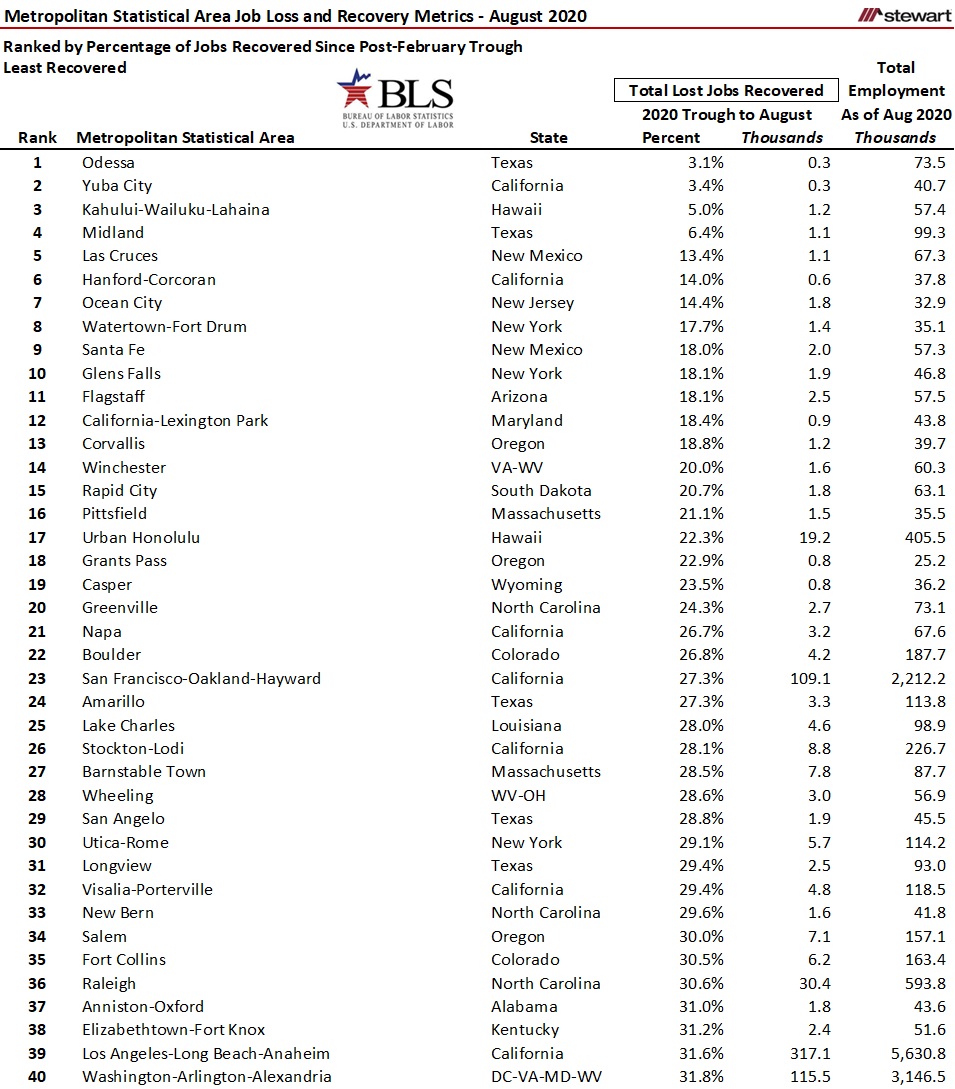 Click here for a PDF detailing these metrics and relative ranks for all MSAs, sorted by state.

Assuming the country can avoid a double-dip recession, there should be more green shouts among the MSAs sprouting in coming months. Still, the country is likely years away from recapturing all of the jobs lost at the onset of the pandemic.