Economic Recovery Slides to 661,000 Jobs Brought Back in September 2020, with Unemployment Falling from 8.4 Percent to 7.9 Percent

Prior to the 2020 pandemic, a one-month job gain of more than 660,000 jobs had only ever happened once in the history of the United States. Following the recession and combined with the tax cuts under President Ronald, the U.S. added 1.118 million net new jobs in September 1983 on a seasonally adjusted basis according to the Bureau of Labor Statistics (BLS). In more ordinary economic circumstances, the 661,000 jobs added in September 2020 would have been phenomenal. Given the massive 20.787 million job losses in April of this year alone, however, the 661,000 brought back this past month was a paltry recovery compared to the precipitous plunge in employment driven by the pandemic.

Monthly jobs changes and unemployment rates (all on a seasonally adjusted basis) for 2020 are shown in the table. To put the 661,000 into perspective, the U.S. averaged 131,000 new jobs monthly from January 1975 through January 2020 and had a monthly median gain in that time frame of 181,000.  Hence the 661,000 in September 2020 was 4.8 times the 25-year average gain and 3.6 times the median gain. Unfortunately, compared to the unprecedented recovery from May through August of pandemic-lost jobs, the 661,000 is a disappointment. 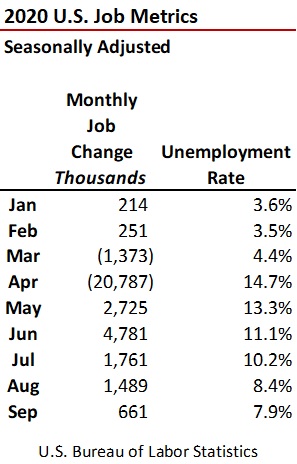 Total employment is shown in the following graph. Just slightly more than one-half (51.5 percent) of the job losses recorded in March and April from the pandemic have been regained, but 48.5 percent have yet to be brought back. 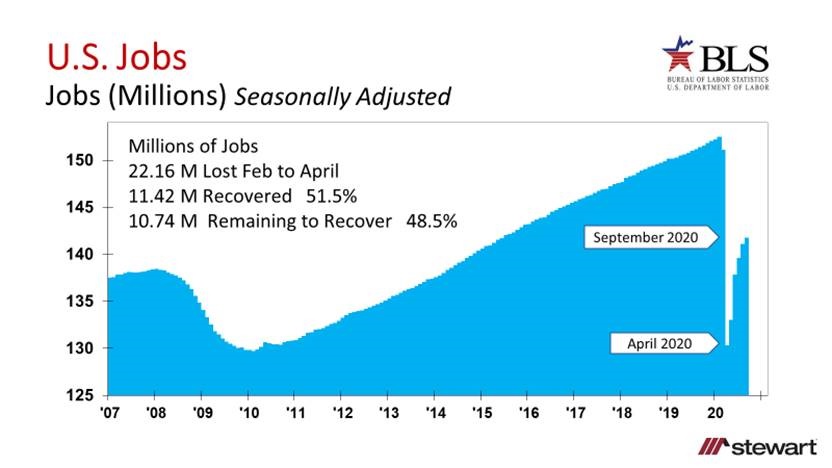 The last graph shows total employment in the Leisure & Hospitality Supersector monthly since January 2007 on a seasonally adjusted basis. While this is not a higher-paying segment of the U.S. economy and only made up one-in-nine jobs (11.1 percent) prior to the March pandemic, it is a leading indicator of consumer confidence.   People do not spend money in the Leisure & Hospitality Sector unless they feel good about the future. 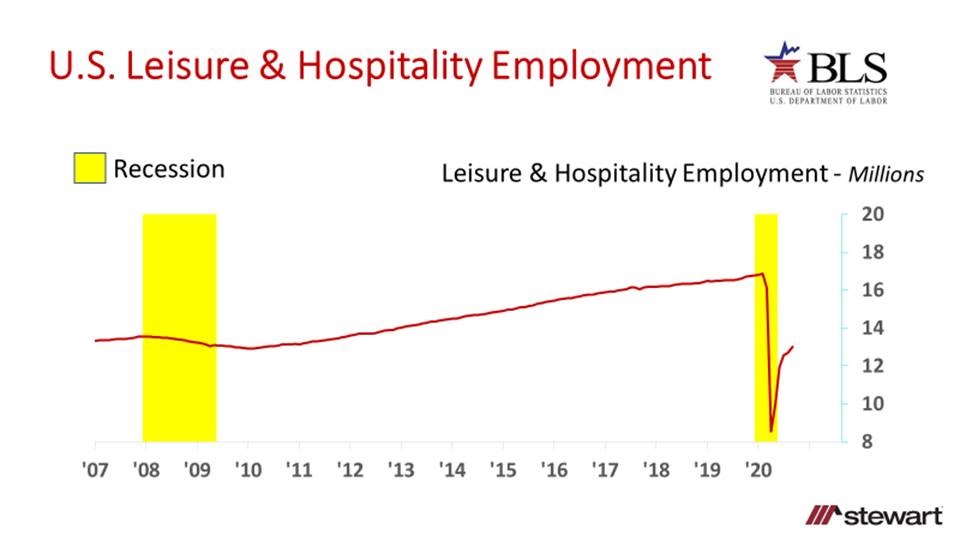 Expectations are for a softer and slower recovery in Q4 2020 as economic stimulus funds run dry given the failure of Congress to get their act together – with the potential for a double-dip recession assuming Q3 2020 posted a positive GDP change number. Magnifying that are the layoffs of the airline industry and the growing wave of businesses that can no longer hang on in this Coronavirus-eroded economy.

Jobs are everything to the economy. Period. Unfortunately, despite record or near-record numbers of job recoveries from May through September 2020, the U.S. is still down 10.74 million jobs compared to all-time peak employment of 152.46 million registered in February 2020.

Have been quoting the infamous philosopher (and baseball player) Yogi Berra who said, “It ain’t over until it’s over.” This virus is not over until there is a vaccine or therapeutic that takes away our fears and gets us back to normal. But as Yogi also said, “If the world were perfect, it wouldn’t be.”

The election is coming prior to the October Employment Situation release by the BLS on Friday, November 6th. While there will be a jobs report that day, the U.S. may still not know the outcome of the election of November 3rd.

Tighten your seat belt, we may be approaching some more economic turbulence.