It’s an election year, so things are always different – correct? Housing sales will be down no matter what? Right? The high-end market always slows – right? Both are myths – but are they true?

MythBusters was one of my favorite TV shows years ago, but analyzing these housing sales myths is not going to be nearly as fun or entertaining at blowing up stuff as the stars (Jamie Hyneman & Adam Savage) did in each of the 282 episodes. Questions in several recent online presentations have started and concluded as follows:  “It is a fact that housing sales decline in election years, so will that be true also in 2020?” The next most common election year housing sales question is, “Since luxury goods and high-end sales always decline in election years, to what extent will that happen to high-end housing in 2020?” Both are valid questions, but each assumes that election years make a difference. Do they? Or is that just a myth?

As a researcher, I have always responded to these type of questions with, “If I agree with your assumptions, I must agree with the conclusions.” This akin to saying that A + B = C.   If you know what A & B are, C is obvious. Thus the key is the initial assumption. Do historical data show declining sales overall and in higher-priced segments?

It is pretty straight forward to test the hypothesis of whether home sales drop in election years by using existing home sales data from the National Association of Realtors® (NAR). Raw (not seasonally adjusted) monthly home sales were compared for the months of September, October and November for the past five election years: 2000, 2004, 2008, 2012 and 2016. If election years truly restrict home sales, then the expectation would be for home sales in all three months (or at least the majority) to be down from the prior year.

First, we need to remove 2008 from the mix as it was the onset year of a massive slide in home sales due to the popping of the housing bubble. Thus ignore 2008 -- sales were going to be down regardless of the election. That said, each and every month from September through November of the four other years showed an increase in existing home sales – though a few were minimal. While there was not a large increase in sales year-over-year for September, the November home sales gain for three-out-of-four years was in double digits. Since November closings are likely September and October contracts (both prior to an election with an unknown outcome), it is safe to assume that the election had little if any negative impact on existing home sales in the election year. 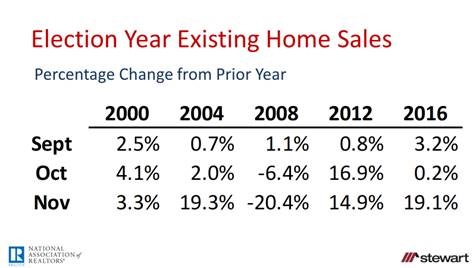 While two observations do not make a trend, there is no negative impact what-so-ever on high-end housing sales given the latest data from NAR based on changes in sales numbers year-over-year in higher-end price segments. The percentage change in the number of August closings versus the prior year for 2016 and 2020 are shown below. Granted, isolating home sales by price range is clouded in 2020 with concurrence of the election and the pandemic, it was not in 2016. The following tables are a summary of sales by price range reported by NAR based on a sample across the country of Single Family Home sales. There is no doubt that lower-priced homes were restrained by lack of listing inventory. Nor is there any question as to whether or not higher-end home sales retracted, rather they increased significantly in both Augusts. This data series is relatively recent by NAR and hence there were not August comparisons for the prior election years. Nor were changes in listing inventory reported in the 2016 data. 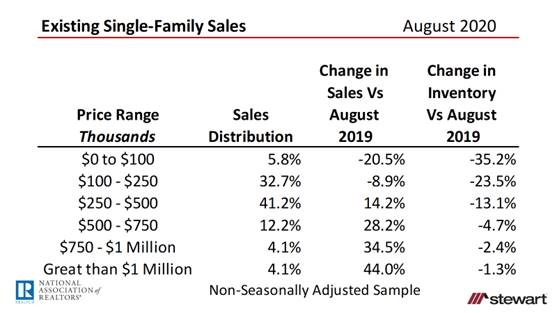 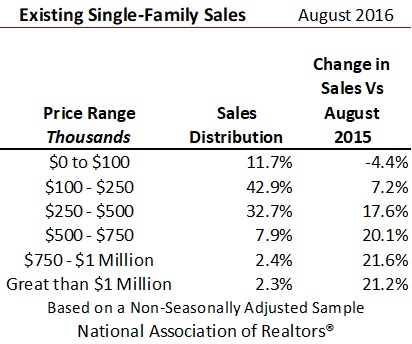 When talking about housing sales in election years, however, the data disagree with the statement that housing sales are weaker, nor are sales of higher-priced luxury properties diminished. It may even be that the uncertainty of an election outcome stimulates housing sales. This would be a great research hypothesis for a young, recent PhD graduate or perhaps a dissertation topic.

But for this researcher, case closed. These are just unsupported myths. Election years do not place a drag on either existing home sales or the higher-priced housing segment.

It still would have been fun to blow something up………