Retail sales (including food services) dominate the U.S. economy typically making up 70 percent of Gross Domestic Product (GDP). GDP is essentially the value of all goods and services produced.

Retail sales plunged 20.7 percent from February 2020 (baseline prior to the Coronavirus impact) to April 2020, but has since recovered to an all-time record $211.1 billion on a seasonally adjusted annualized rate (SAAR) in real terms (adjusted for inflation). Total retail sales are shown in the following graphs, with the first graph showing data monthly since 2007 and the second from 2019 on. 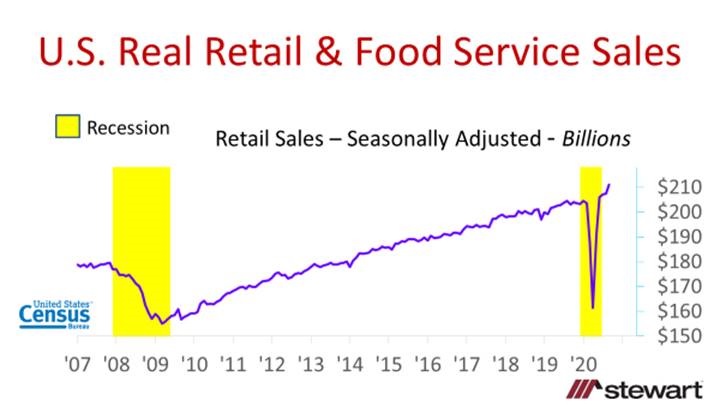 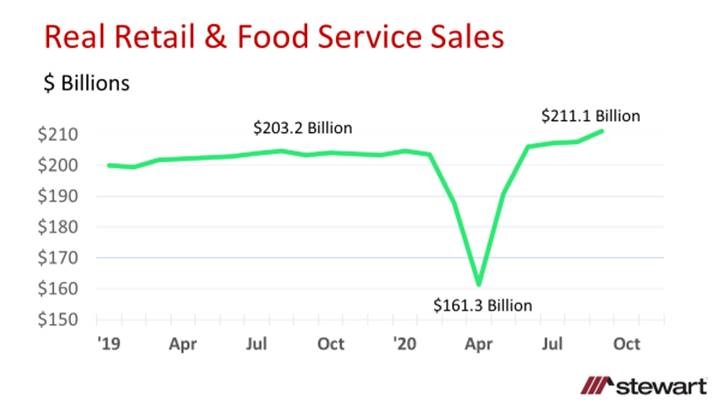 Though retail sales were up 3.9 percent after adjusting for inflation on a SAAR, what we are buying and where we buy is different. Advanced estimates of retail sales by Kind of Business are shown in the following table for both Year-to-Date and September. The U.S. Census Bureau bases these advanced estimates on early estimates using a small sample of firms – thus they are subject to revision and are not reported for every kind of business.

Largest gainers with more than a double-digits gain Year-to-Date include: 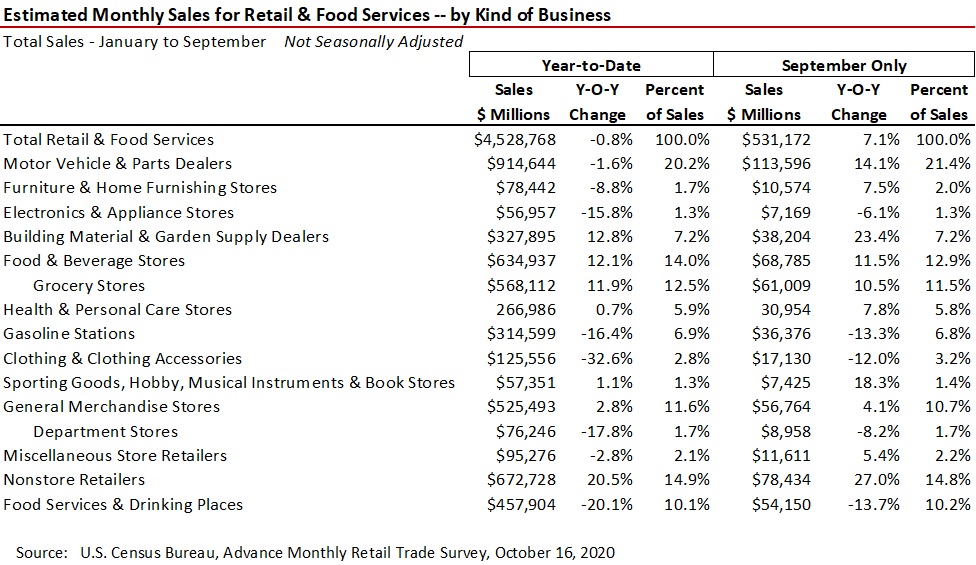 Just because a Kind of Business segment registered a change does not equate to all stores within that space performing likewise. September Food Services & Drinking Places reported a 13.7 percent decline for the entire segment, yet McDonalds in Q3 2020 saw U.S. same-store sales rise almost 5 percent due to drive-through ordering and cheap prices. A major concern is that major U.S. corporate business sales and market share have grown in the pandemic while main street and mom & pop businesses have suffered. In June 2020, for example, the Independent Restaurant Coalition reported that while independent restaurants make up 70 percent of all U.S. eateries, up to 85 percent of those were at risk of closure.

To see the monthly estimate of the Retail Sales from the U.S. Census click https://www.census.gov/retail/marts/historic_releases.html

While retail sales are coming back, what and where we buy has changed. That will continue to make winners and losers across businesses nationwide.