A normal jobs report would look at 1-month and 12-month changes jobs and call it a day. In the pandemic landscape of today, however, the focus is on how many jobs were lost initially and how well the recovery is going. The underlying data are reported monthly by the U.S. Bureau of Labor Statistics (BLS), with this series utilizing seasonally adjusted data which allows comparison across any given month of the year. There are 380 Metropolitan Statistical Areas (MSAs) for which monthly data are available.

The 50 MSAs that had the greatest and least percentage of jobs lost from the baseline (February 2020) to the trough (the low point from March to September) are shown in the next two  tables. The wide range of results is seen when comparing Atlantic City-Hammonton, New Jersey’s 33.5 percent loss of jobs (the highest percentage) to the 3.8 percent rate at Staunton-Waynesboro, Virginia (the lowest percent of job losses) – a multiple of almost 10 fold. 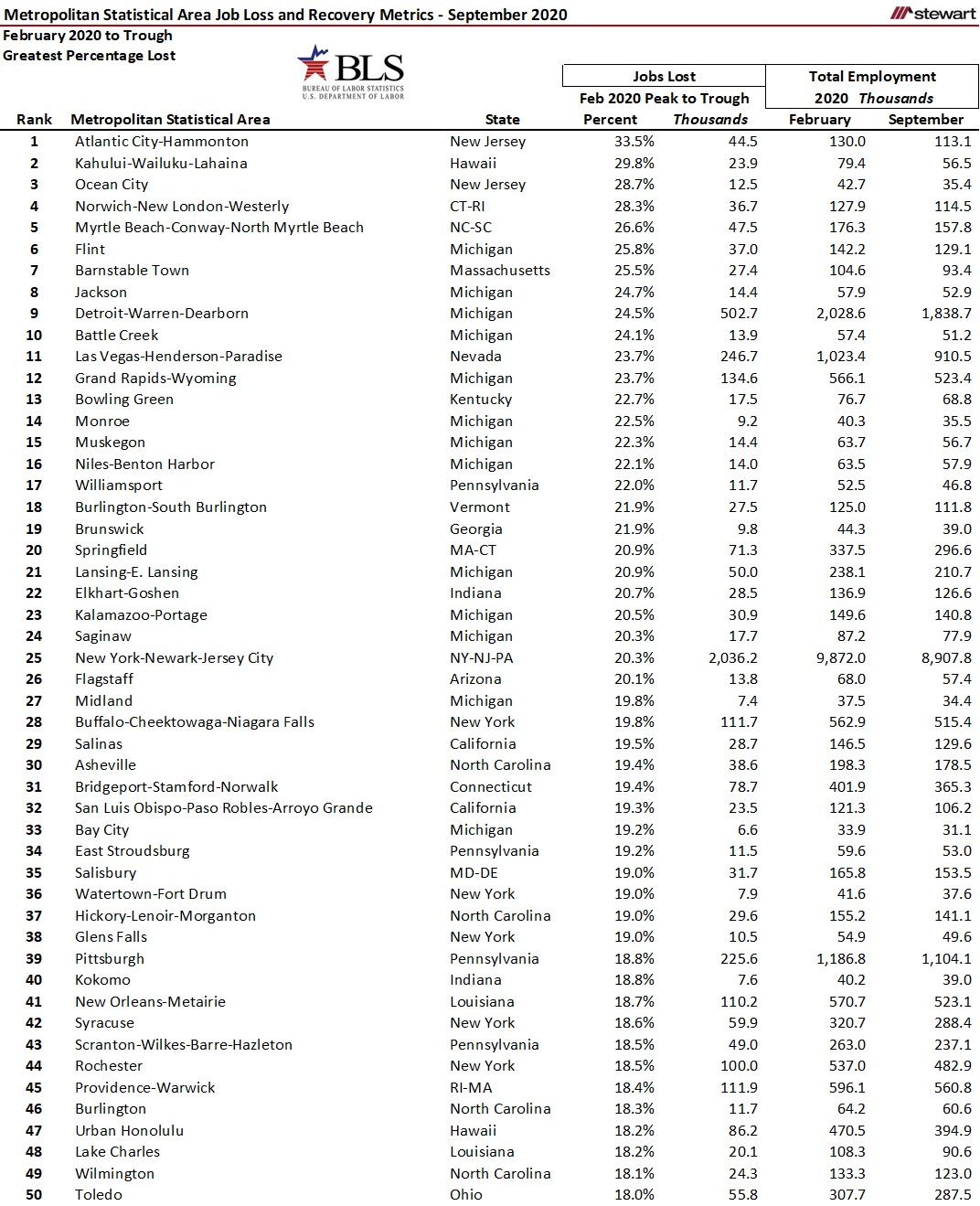 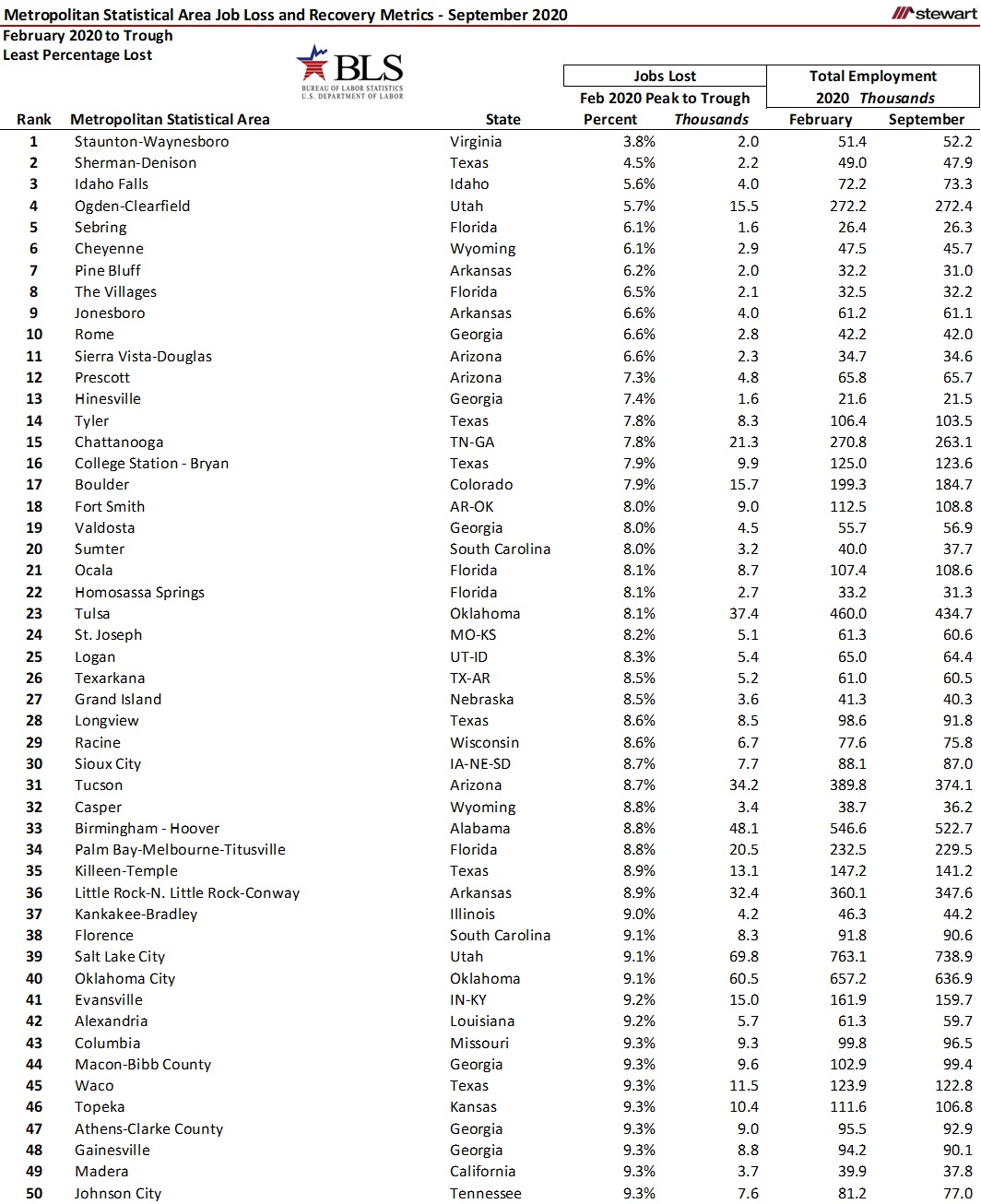 The economic pain of pandemic-related lost jobs has been muted in a handful of MSAs having a quicker recovery. The next two tables show the 50 MSAs with the best and worst recovery rates of jobs lost since the February baseline. Each shows the percentage of jobs lost that have thus been recouped. Ten MSAs now have more total jobs than as of February 2020. Not only have they brought back all of the jobs that were lost following the economic slowdown-shutdown, but added others.  Idaho Falls tops the list, but initially lost 4,000 jobs in March and April -- a 5.6 percent decline.  Since the trough, however, the city has gained 5,500 jobs and thus had 1,500 more jobs in September than February. One MSA has the exact same number – Sierra Vista-Douglas, Arizona. Lake Charles, Louisiana, tops the list of cities with the least percentage of jobs recovered given the double whammy of COVID-19 and several hurricanes. Unfortunately Lake Charles has not recovered any of the jobs lost since February. 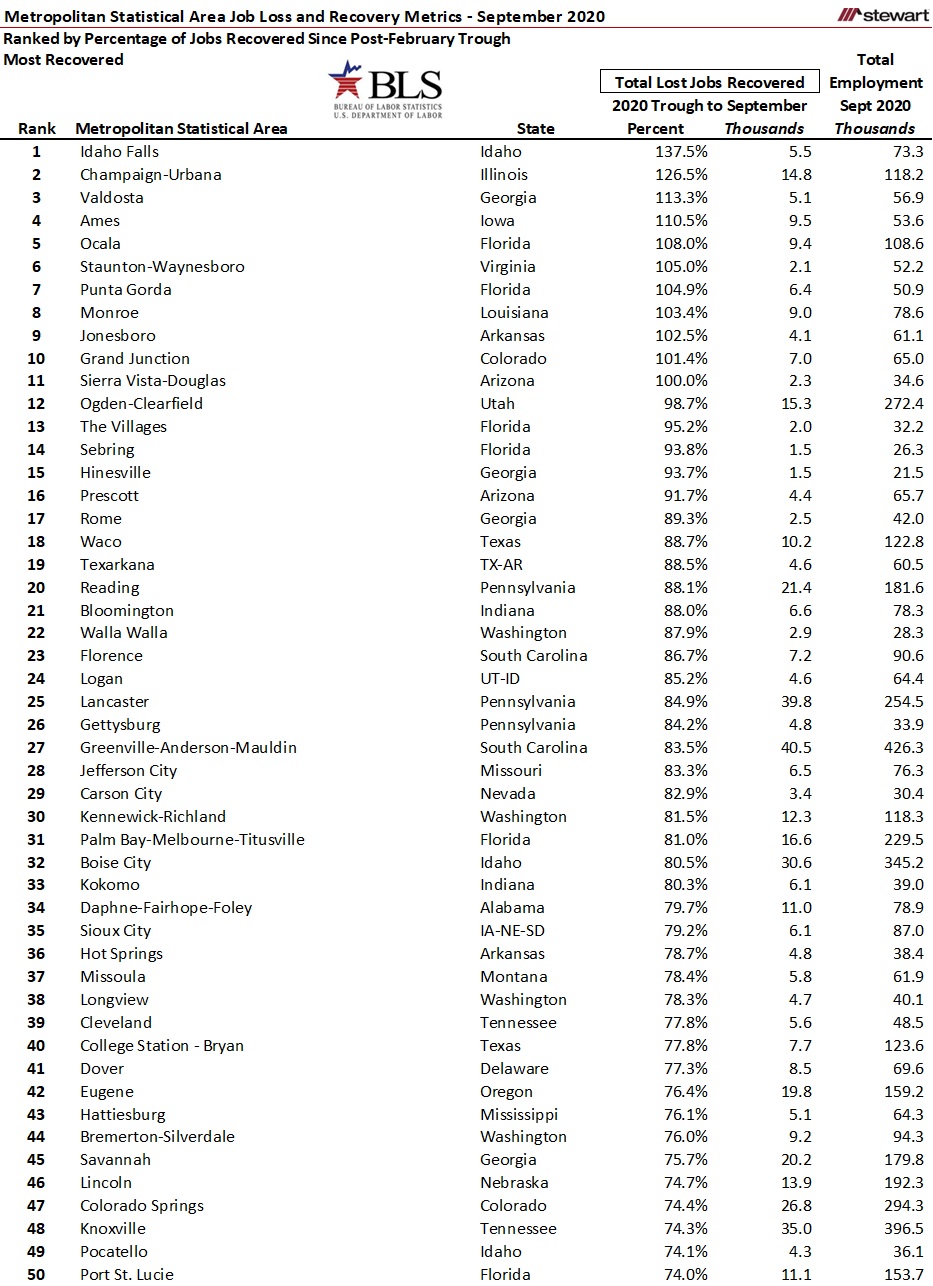 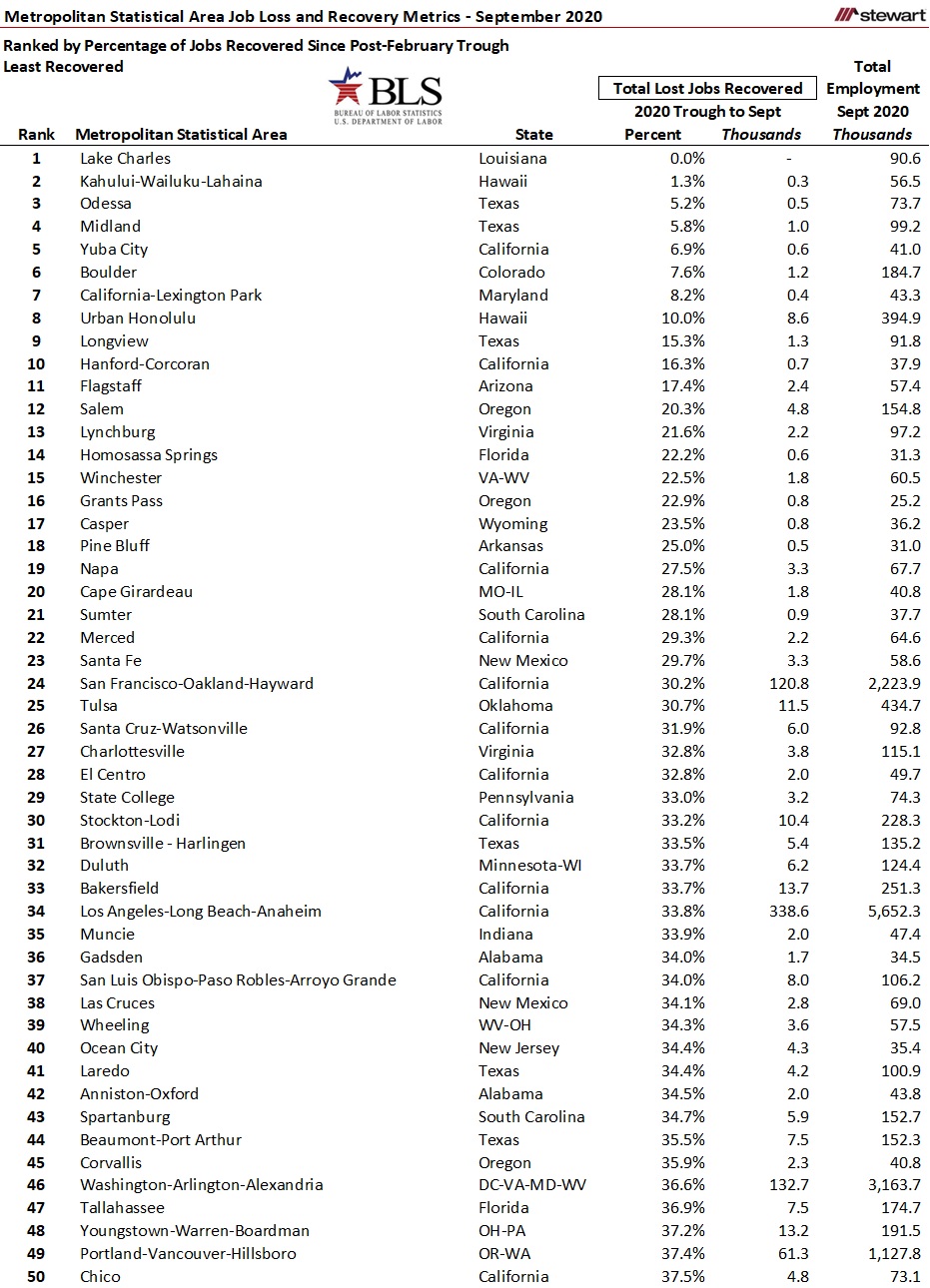 Job growth (and loss) rates for the latest 12-months are detailed in the next two tables. The first shows the 50 MSAs with the best 12-month job performance and the second the MSAs with the worst job loss rates. The 3.7 percent, 12-month job growth rate for Idaho Falls would have been impressive under normal circumstances, but is phenomenal considering the metro had lost 5.6 percent of all jobs from February to April. The metro with the greatest percentage decline is Kahului-Wailuku-Lahaina, Hawaii, which is now missing 3-out-of-every 10 jobs counted September 2019. 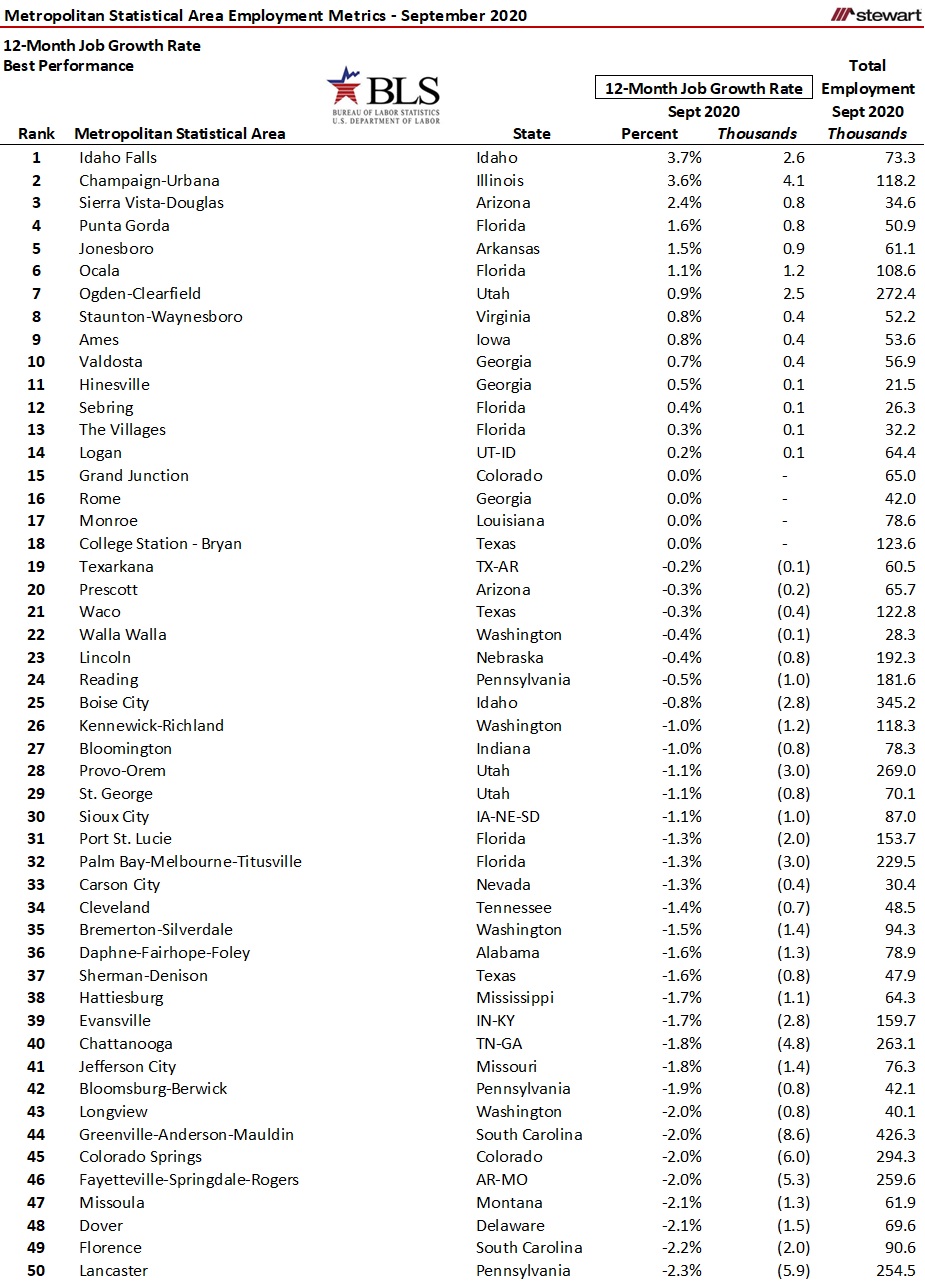 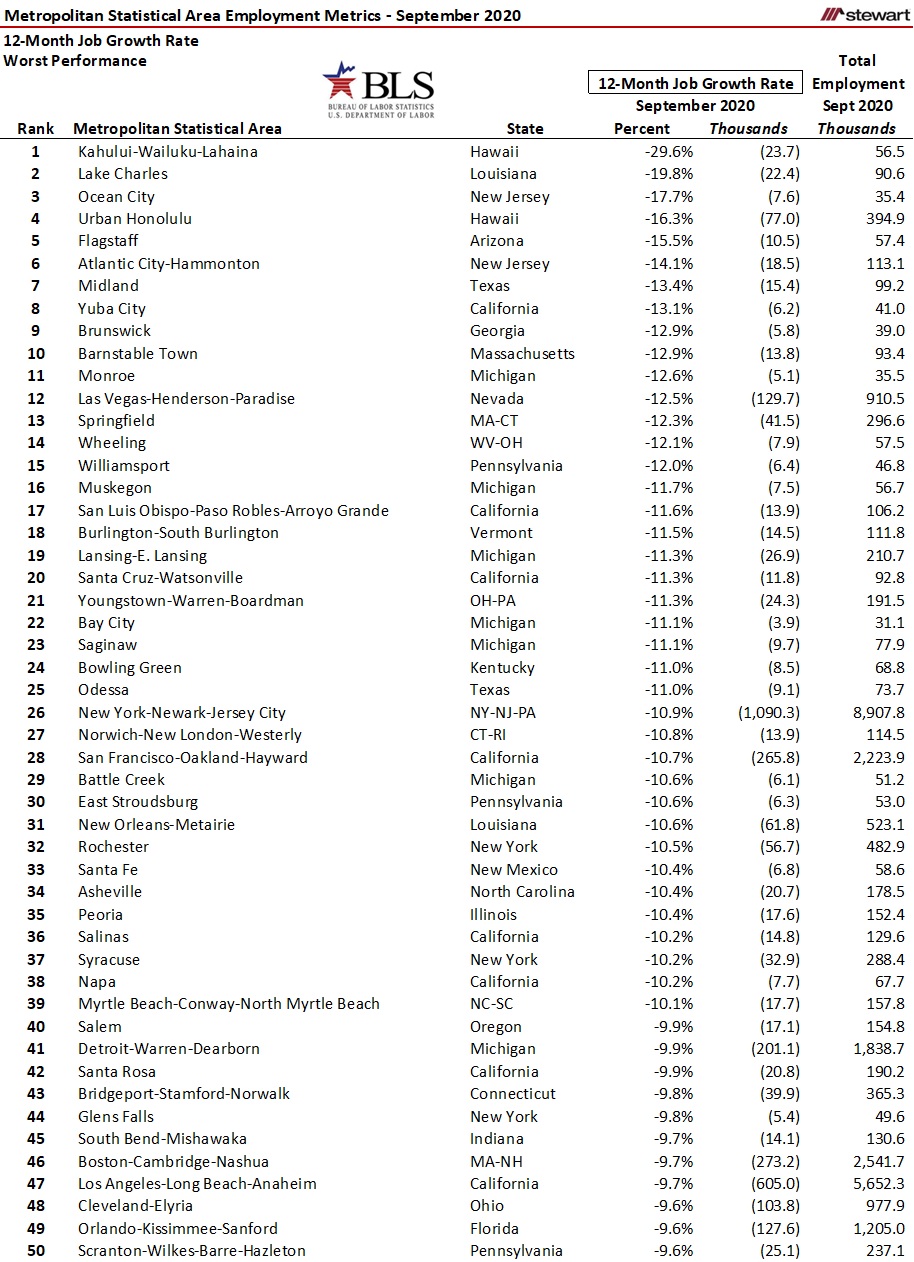 The last two tables are similar to the prior two, but are based on 5-year job growth rates rather than 12-months. It is somewhat ironic that The Villages, Florida, a retirement community where people move when they depart their careers, posted the best 5-year job growth rate out of the 380 MSAs, at 21.1 percent. 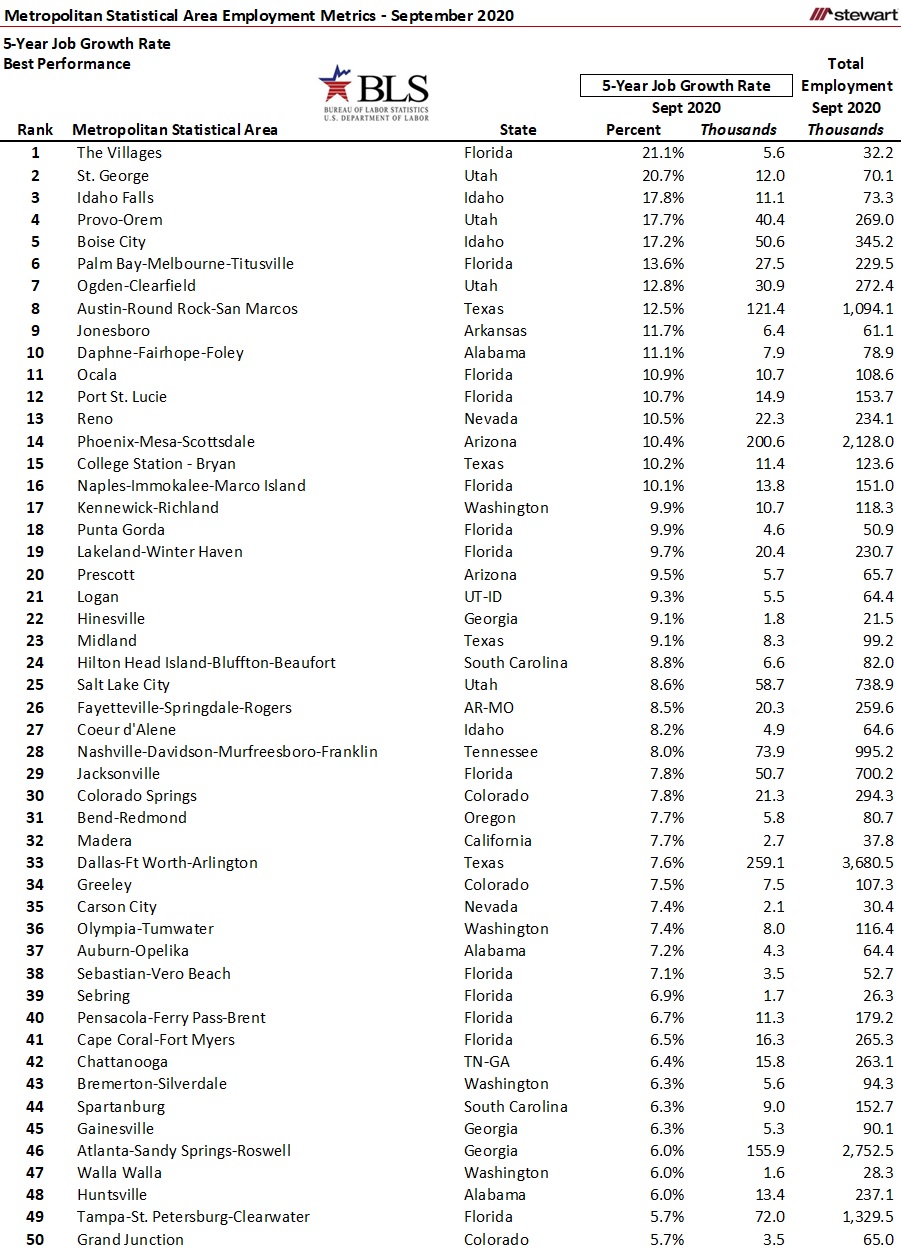 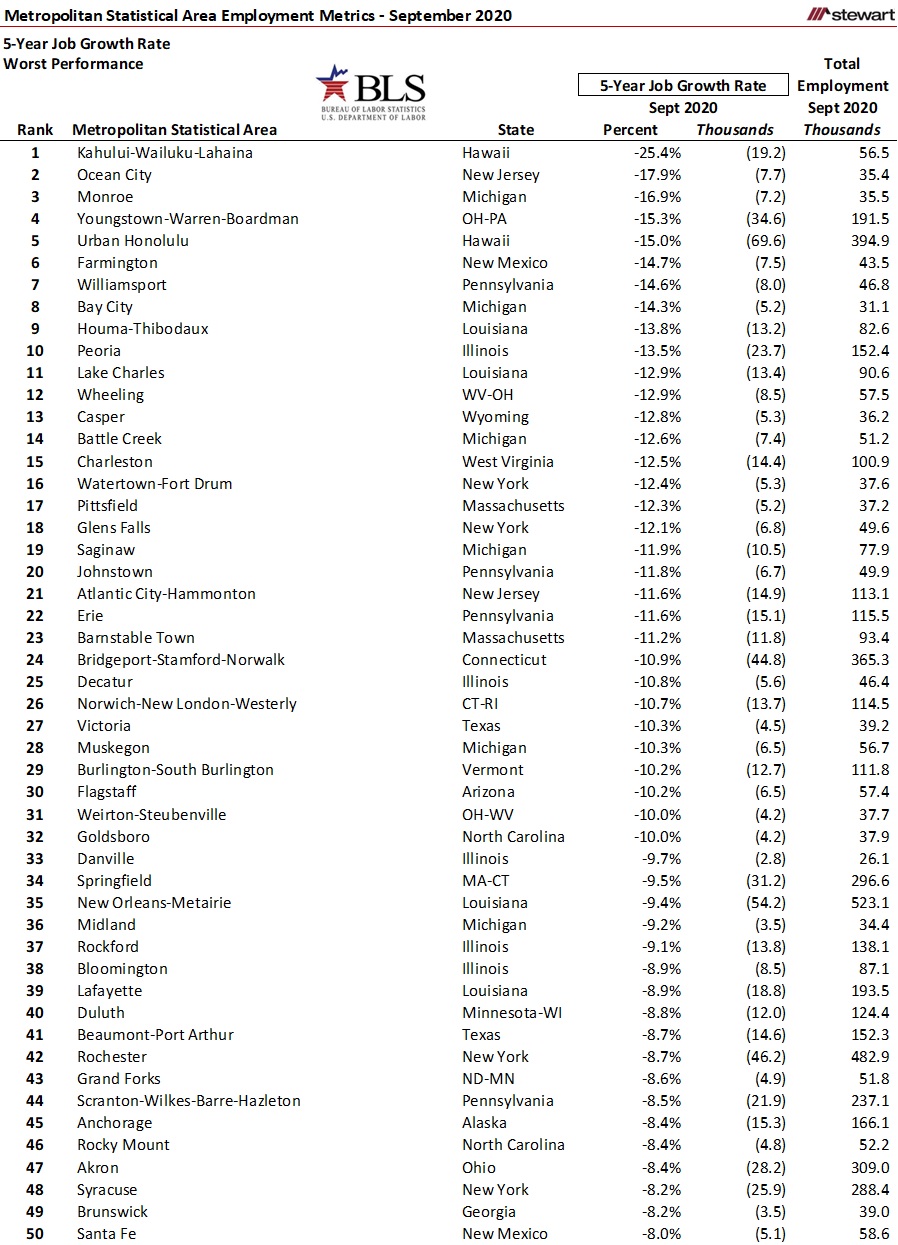 Click here to see the PDF that lists these metrics for all 380 MSAs for which data are available. Included are ranking on job losses, recovery, 12-month and 5-year job growth rates.

The BLS has a myriad of data relating to employment at https://www.bls.gov/ then click data tools.

Jobs are everything to the economy. Unfortunately, many metros are hurting today, but a hand-full are bright spots in the economic darkness.