The economy continues to claw back from the economic punch of the pandemic, with 638,000 jobs recaptured in October on a seasonally adjusted basis as reported by the U.S. Bureau of Labor Statistics (BLS). There still remains 10.1 million jobs yet to be brought back out of the 22.2 million lost from February 2020 (pre-pandemic) to the bottom.  From the peak to the trough, the U.S. lost 14.5 percent of all jobs but has now recovered 54.5 percent of those. The unemployment rate, which jumped from a 50-year low of 3.5 percent in February of this year, rocketed up to 14.7 percent in April but has slid back to a better-than expected 6.9 percent as of October. Both monthly job changes and unemployment rates are shown in the table for 2020 which tracks the recovery. 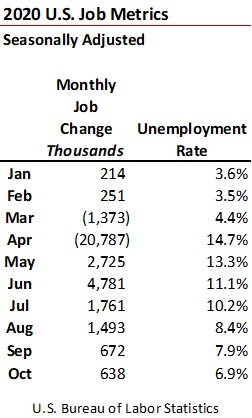 The following graph shows total employment on a seasonally adjusted basis monthly since 2007. Note that the U.S. essentially lost all of the jobs created since the trough of the Great Recession in 2010 – at least numbers wise. 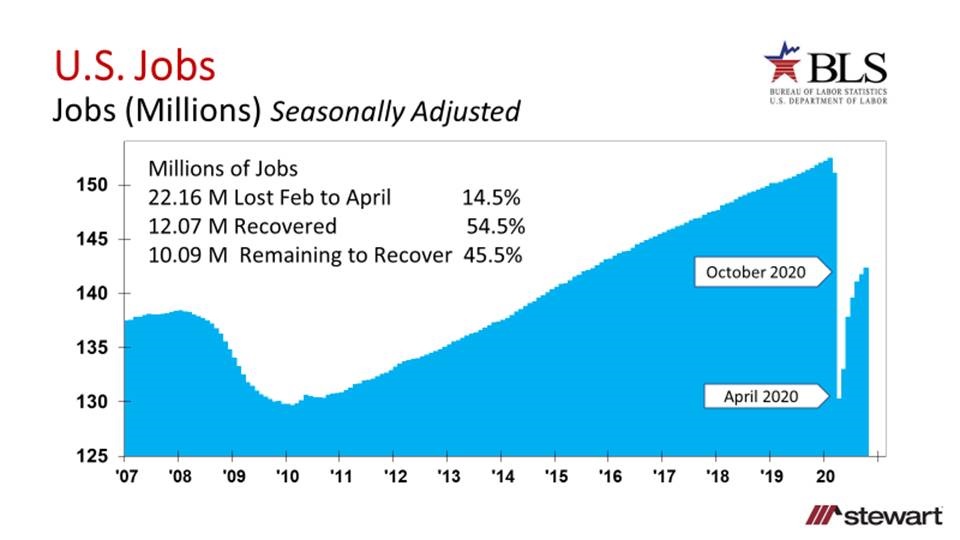 Job loss and recovery rates are not equal, however, and vary across the types of jobs. The BLS reports nine Supersectors based on the North American Industry Classification System (NAICS) of various types of  employment, These are shown in the table along with several metrics. Two of the Supersectors posted lost jobs in October, but for differing reasons. Mining & Logging, which includes oil and gas exploration and production, shed another 1,000 jobs as the oil sector struggles with sub-$40 ($39.40 average in October) per barrel oil, down 31.5 percent from $57.52 per barrel in January. Government employment also dropped 268,000 jobs in October of which 147,000 were a known reduction as the U.S. Census Bureau completed the 2020 Census and eliminated temporary workers. Construction lead the pack in job recovery, having brought back 72.9 percent of the jobs lost in the pandemic, followed by Other Services at 68.2 percent, and Trade-Transportation & Utilities at 67.8 percent.

The last table shows unemployment rates across educational attainment levels and demographics. The pandemic-driven hit to the economy has unfortunately more severely impacted the young, less educated, and minorities. 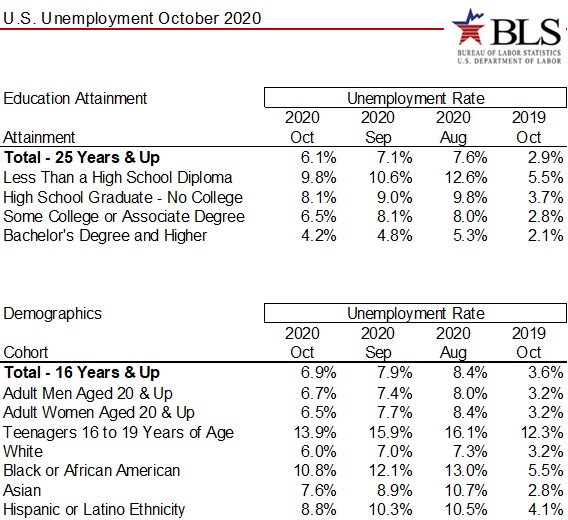 To access the latest monthly employment release from the BLS click https://www.bls.gov/news.release/pdf/empsit.pdf Jobs are everything to the economy.  Unfortunately, the slowing pace of recouping jobs and the significant rise in Coronavirus cases is likely to further push-out the recovery. Airline travel to previous levels is at least two years out – and that is probably highly optimistic. Unfortunately, for many other businesses such as restaurants and bars, the longer the recovery stretches out, the more firms and establishments that will permanently fail – forever taking those jobs with them.

“Have been quoting the infamous philosopher (and baseball player) Yogi Berra who said, “It ain’t over until it’s over.”  This virus is not over until there is a vaccine or therapeutic that takes away our fears and gets us back to normal. But as Yogi also said, “If the world were perfect, it wouldn’t be.”

Keep your arms and legs inside the ride at all times and tighten the seatbelt.