Existing home sales accelerated through October 2020, with closings hitting 6.85 million dwellings on a seasonally adjusted annualized rate (SAAR). This was the greatest level posted since March 2006 as reported by the National association of Realtors® (NAR). On a SAAR, sales were up a gigantic 26.6 percent compared to one year ago and up 4.3 percent from the prior month as the housing market continued to make up for the temporary retreat of sales from April through June, as constricted by effects of the pandemic. Monthly sales (not seasonally adjusted) totaled 573,000, up 24.0 percent from October 2019 and at the highest level for any October since NAR commenced tracking home sales.  Existing home sales include single-family, condominiums and co-op property closings.

Median price also rose to an all-time record $313,000, up 15.5 percent from a year. Similar to the drop in sales, median price gains stuttered at the onset of the pandemic but have since accelerated. Median home prices normally are highly seasonal, and peaked in the month of June in 17 of the prior 19 years (with the other two annual highs in July), making this the first October in history to claim a year-high median price – at least until November and December 2020 data are known.

Sales (SAAR) and median prices are shown in the first graph monthly since January 2014. 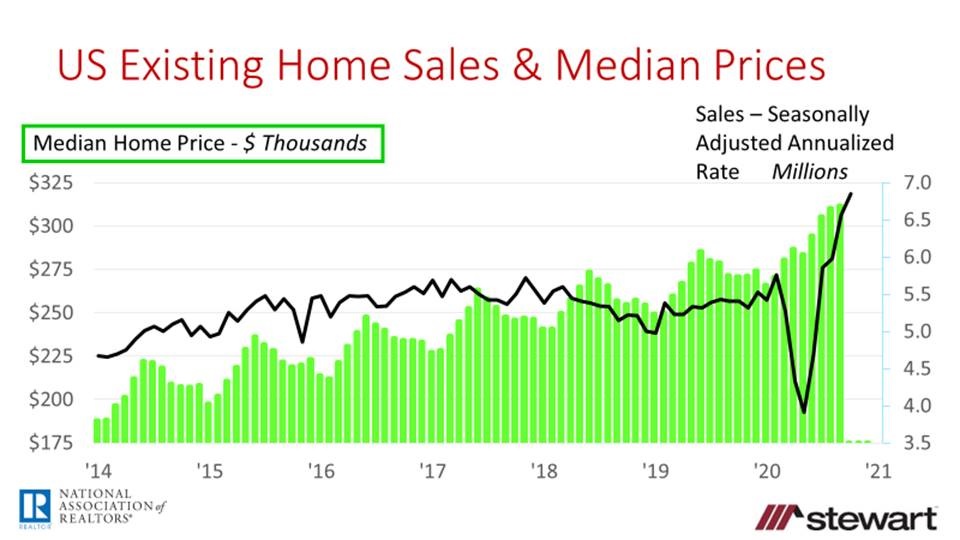 Total sales (actual closings versus a potential representation such as SAAR) are shown in the next graph. While the median price is the same as the prior graph, sales are the trailing 12-months (TTM), calculated by summing the raw monthly sales as reported by NAR. Sales totaled 5.451 million TTM in October, up 3.1 percent vs October a year ago.  These are actual closings where the ownership of the property transfers from one person or party to another. 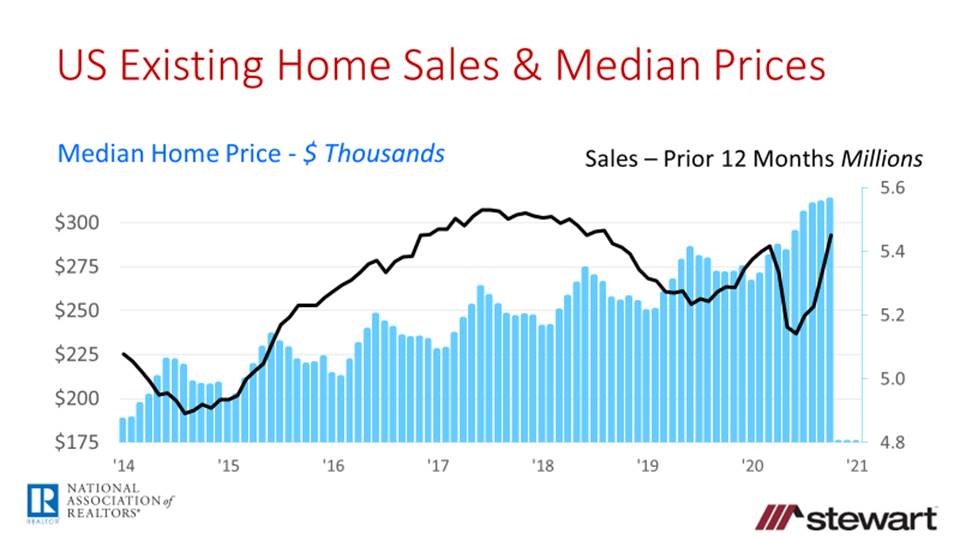 Monthly sales since 2018 are shown in the next three graphs, with the first showing combined sales which include single-family, condominiums and co-ops. Total sales were up 2.4 percent year-to-date in October and up 24.0 percent for the month of October year-over-year. 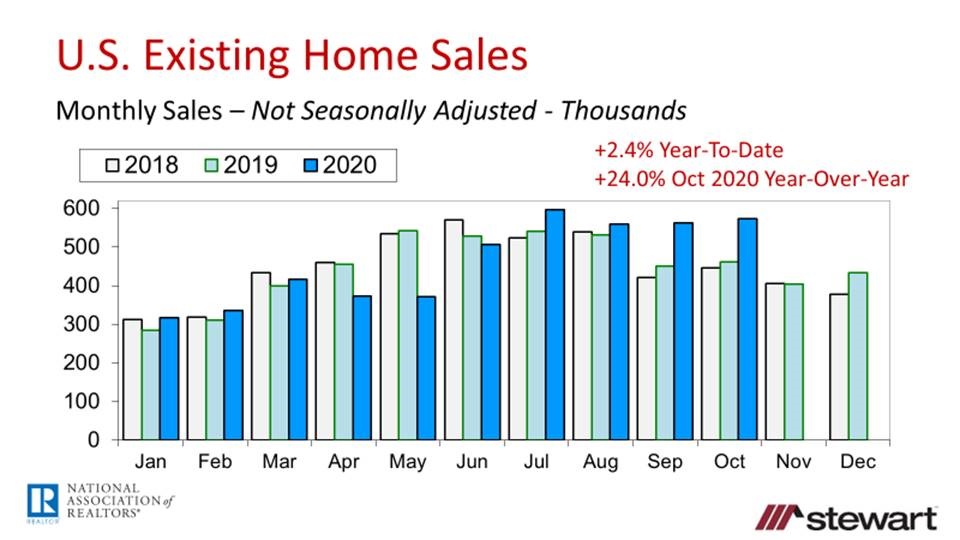 Single-family sales on a monthly basis are detailed in the next graph. Single-family homes sales were up 3.3 percent year-to-date. 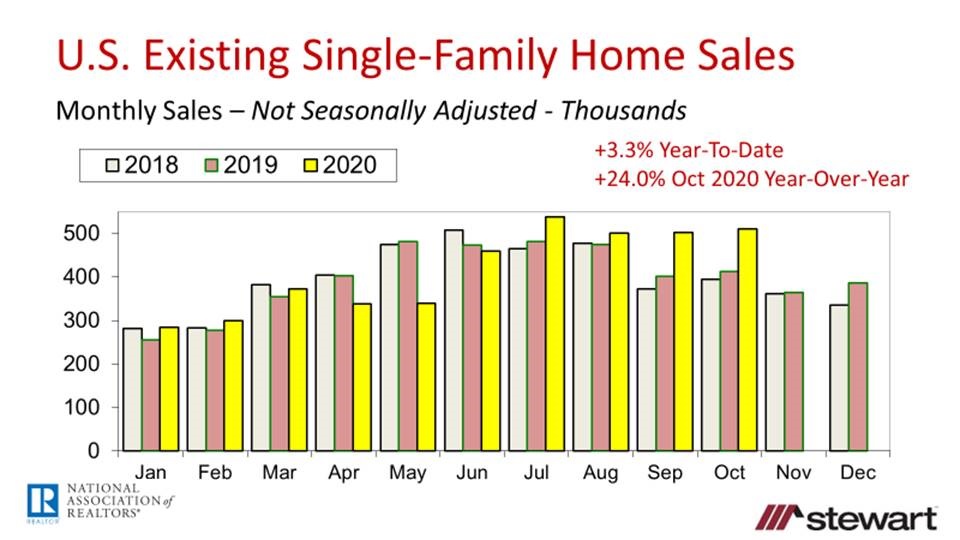 Condominium and Co-op sales are detailed below. Closer, higher-density housing sales plummeted in the initial stages of the pandemic in April and May when there was little known on how COVID 19 was transmitted, but have recovered in the past four months. Sales year-to-date were down just 4.9 percent after plunging 34.0 percent in April and 46.7 percent in May on a monthly year-over-year basis. 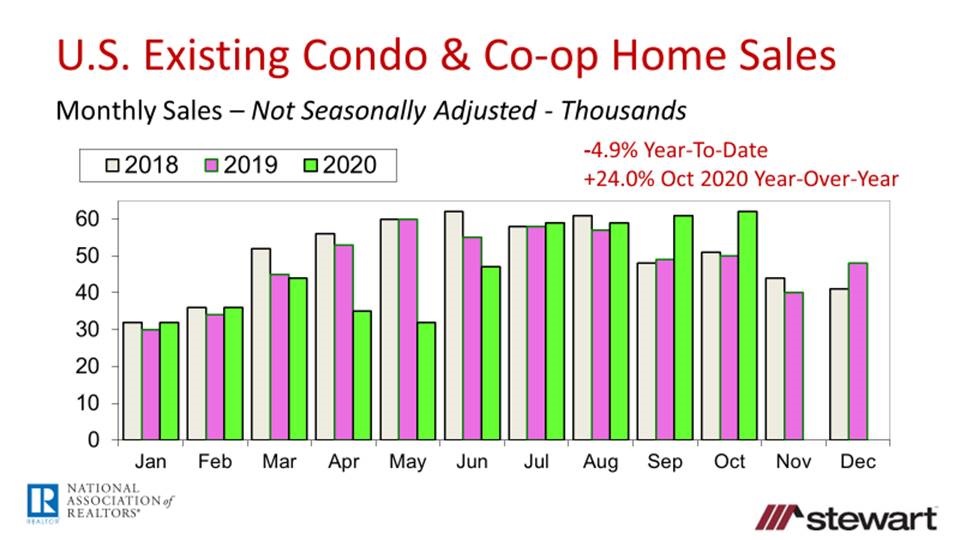 Sales by price range reveal that the hot-housing market continued to have no bounds by price range. NAR conducts a monthly sample (not seasonally adjusted) regarding the percentage change in single-family sales and inventory from one year ago, and distribution of sales by price range. The following table shows these metrics on a national basis for October 2020. Inventory declined or essentially remained flat in every price range on a year-over-year basis.  Sales rose in all price ranges from $100,000 and up.  Shrinking inventory -- down 21.8 percent versus a year ago -- contributed to the drop in sales in the $100,000 and less segment. The greatest year-over-year increase in sales once again was in the $1 million plus range, more than doubling compared to a year ago (up 102.2 percent), with the $750,000 to $1 million segment up 79.9 percent and home sales from $500,000 to $750,000 up 64.4 percent. 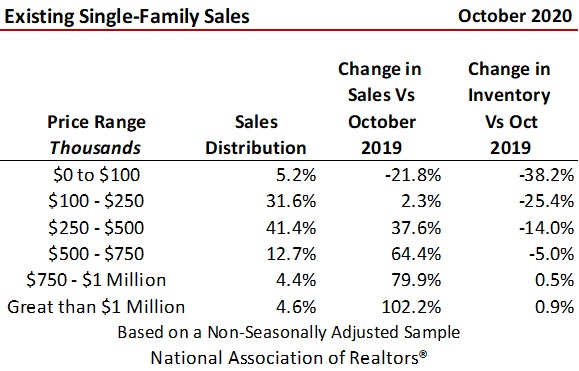 There is no axiom that house prices will always go up. House price escalation (and sales) may not only wane but could decline as interest rates rise and the pandemic subsides in the coming year as the population becomes vaccinated and herd immunity develops. As the fears of the pandemic reside, time spent at home will decay along with the intrinsic value of the home.

Home sales are also a function of jobs – with the U.S. still 10 million jobs short compared to February 2020.   Obviously the pandemic did not as severely economically impact homebuying or homeowner groups. Had the prospective homebuying group been hit, sales would be down and not up. If current homeowners had taken the brunt of the economic impact from the pandemic, then the all-record refi boom ongoing would not be taking place.

NAR’s Pending Homes Sales Index says newly signed home purchase contracts were up 20 percent this October compared to a year ago. Since these are most likely to close in the next 30 to 60 days, the remainder of 2020 looks strong from the home sales perspective. Right now it appears the housing market is heading down the rails at high speed. Multiple factors could derail demand for housing, however, with an increase in interest rates alone a key risk.