Jobs are everything to the economy.  Period.

The latest summary metrics of employment as of October 2020 as reported by the U.S. Bureau of Labor Statistics (BLS) are included in the following tables. Included are 380 Metropolitan Statistical Areas (MSAs) having monthly data and are based on seasonally adjusted employment numbers  allowing an apples-to-apples comparison across months.

The pandemic severely impacted the U.S. economy and the respective number of jobs, with 22 million jobs lost from February (pre-virus) to the trough (ranging from April to July depending on the MSA). The percentage of total jobs lost from February to the trough ranged from a low of 3.8 percent to 33.5 percent.  Since the trough, the U.S. as a whole still has 10 million jobs yet to be brought back.The following table shows the MSAs having  the greatest percentage of lost jobs that have been recovered.  Waco, Texas, for example lost 9.3 percent of all the jobs counted in February, or 93 out of every 1,000 jobs that existed prior to the pandemic. As of October 2020, Waco had recovered 97.4 percent of the jobs lost, which means that 90.6 out of every 93 lost jobs have now been recouped. There were 11 MSAs with more total jobs in October than February with a recovery rate greater than 100 percent. Two MSAs had the same number of jobs in October as they did on February. 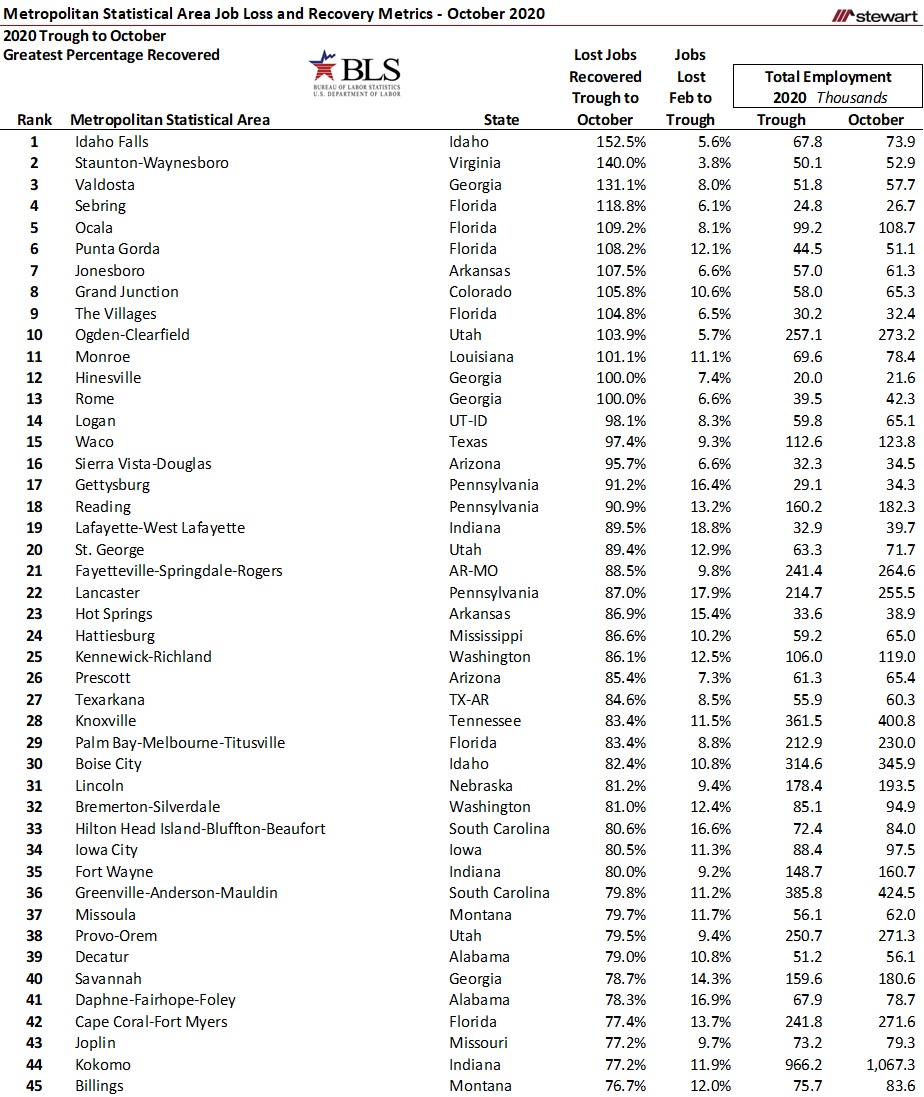 The 45 MSAs with the least percentage of recovered jobs are shown in the next table.  Yuba City, for example, lost 177 out of each 1,000 jobs that existed in February, and has only recouped 6.9 percent of those, equating to 12.2 out each 177 jobs lost. 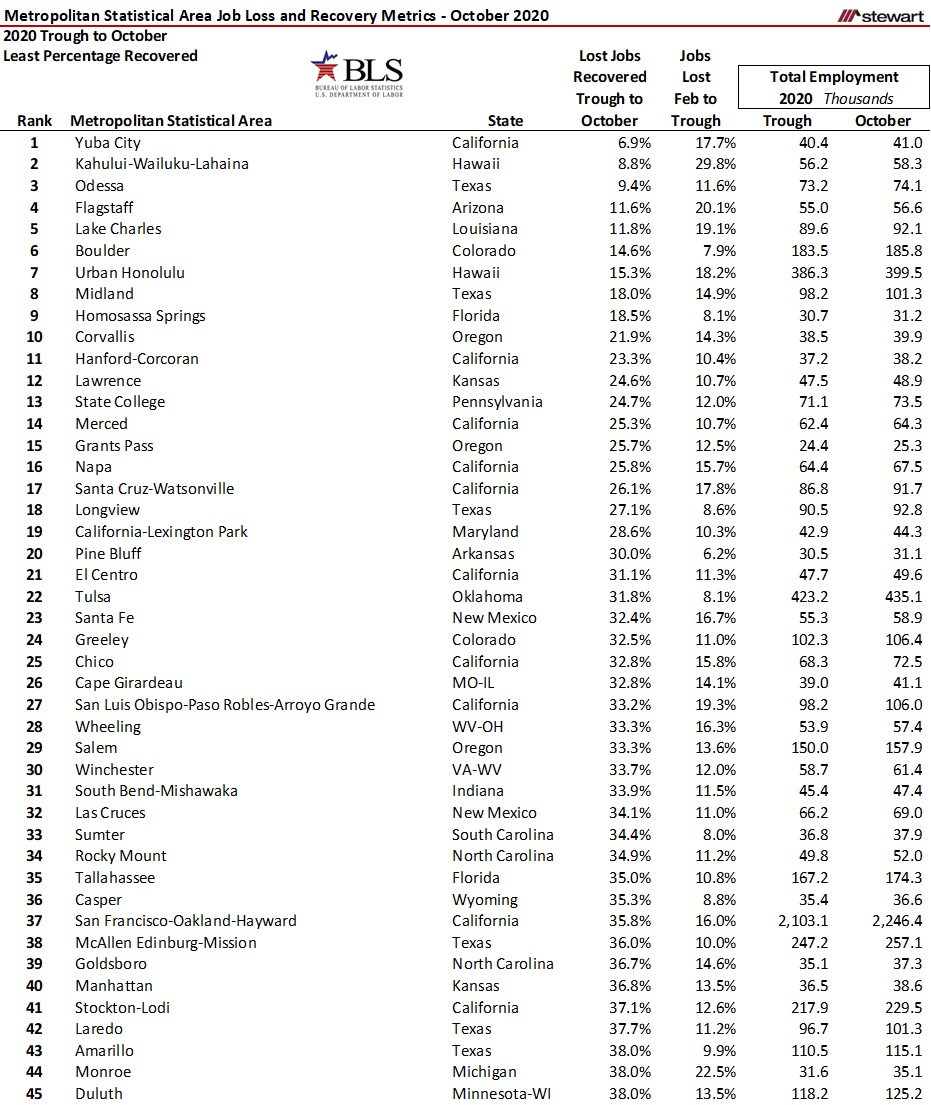 In a normal economic landscape without a pandemic, important job metrics typically calculated are job gains (or losses) in the past one month and prior 12 months.  The next two tables show MSA jobs growth rates for the 12-months ending October 2020 with the first showing the 45 with the best job growth rates and the second the 45 MSAs with the worst. There were 17 MSAs with more jobs in October than one year ago, one unchanged and 362 with fewer jobs. 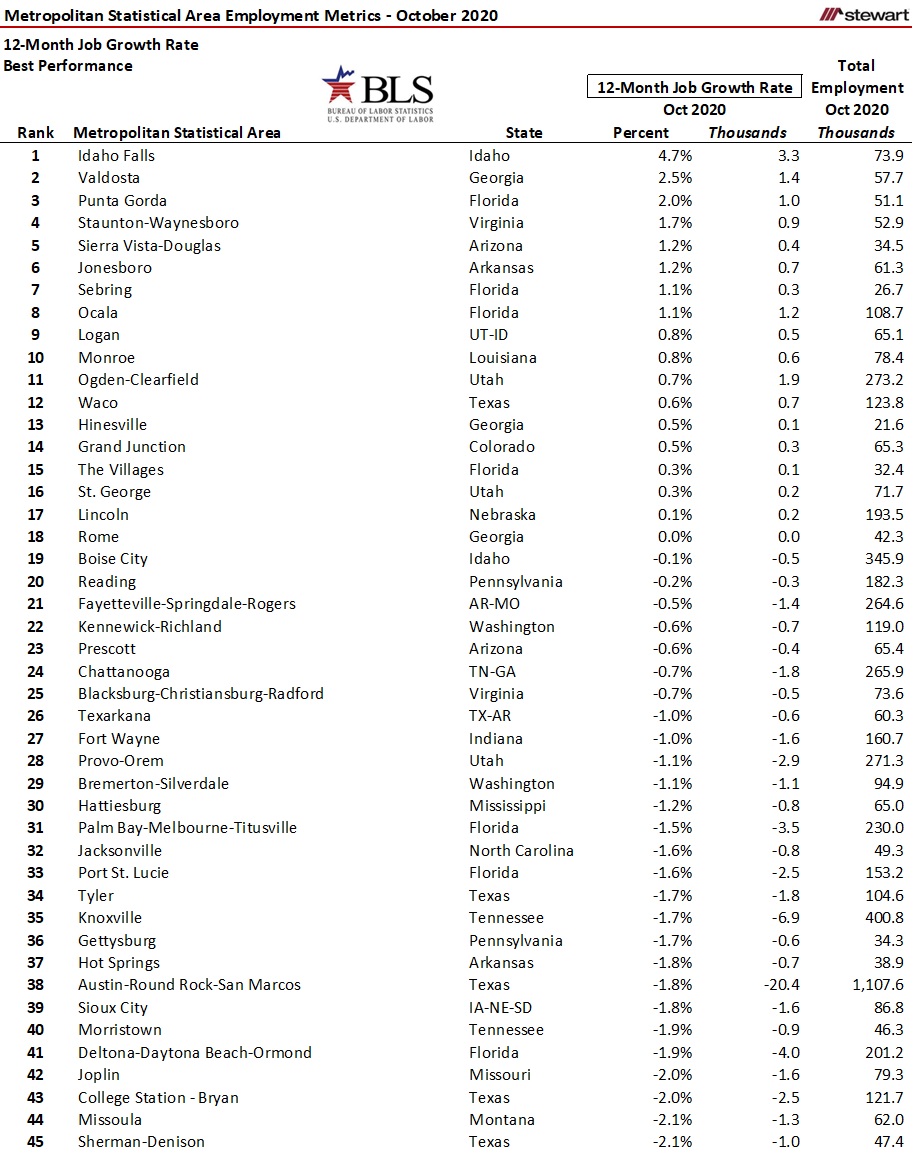 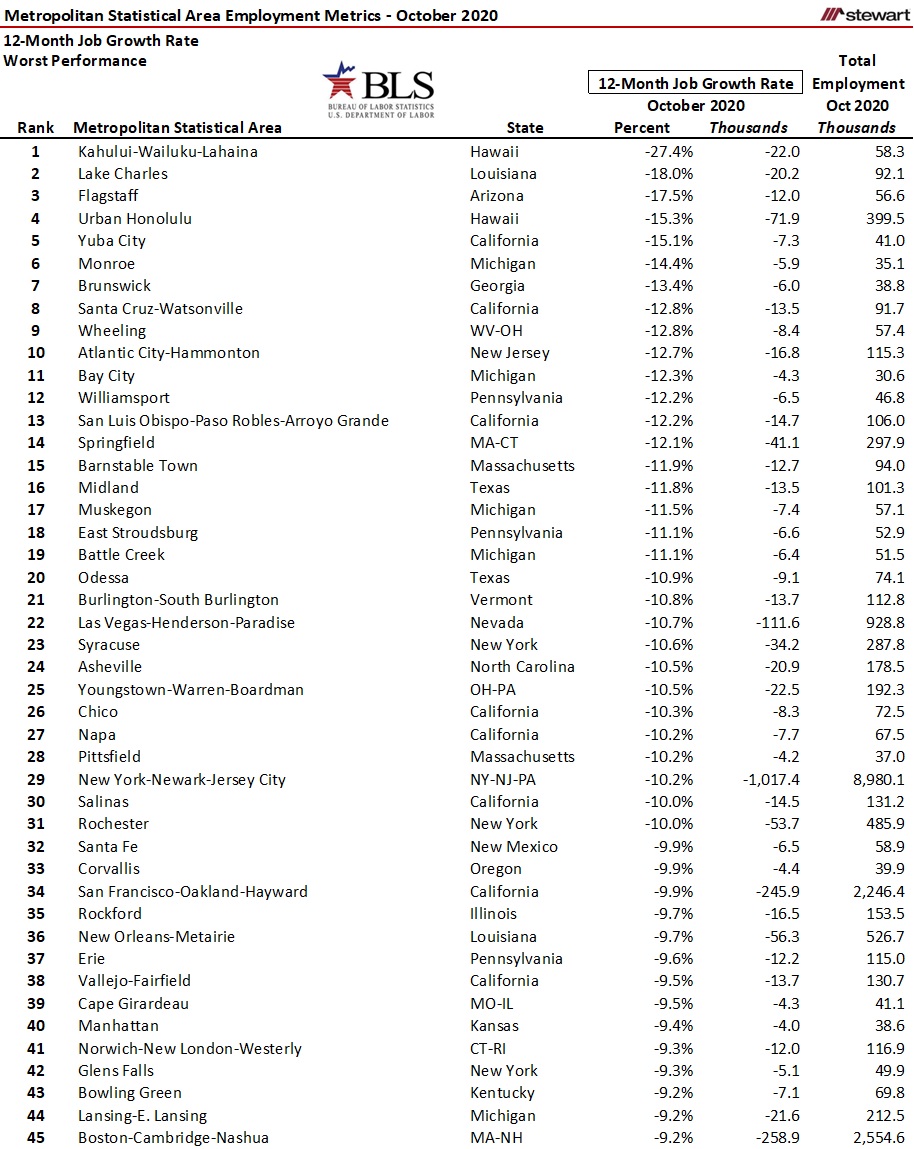 The last two tables list the 45 best and worst MSAs for 1-month job growth. Just 88 of the 380 MSAs (29.2 percent) lost jobs in October compared to September. 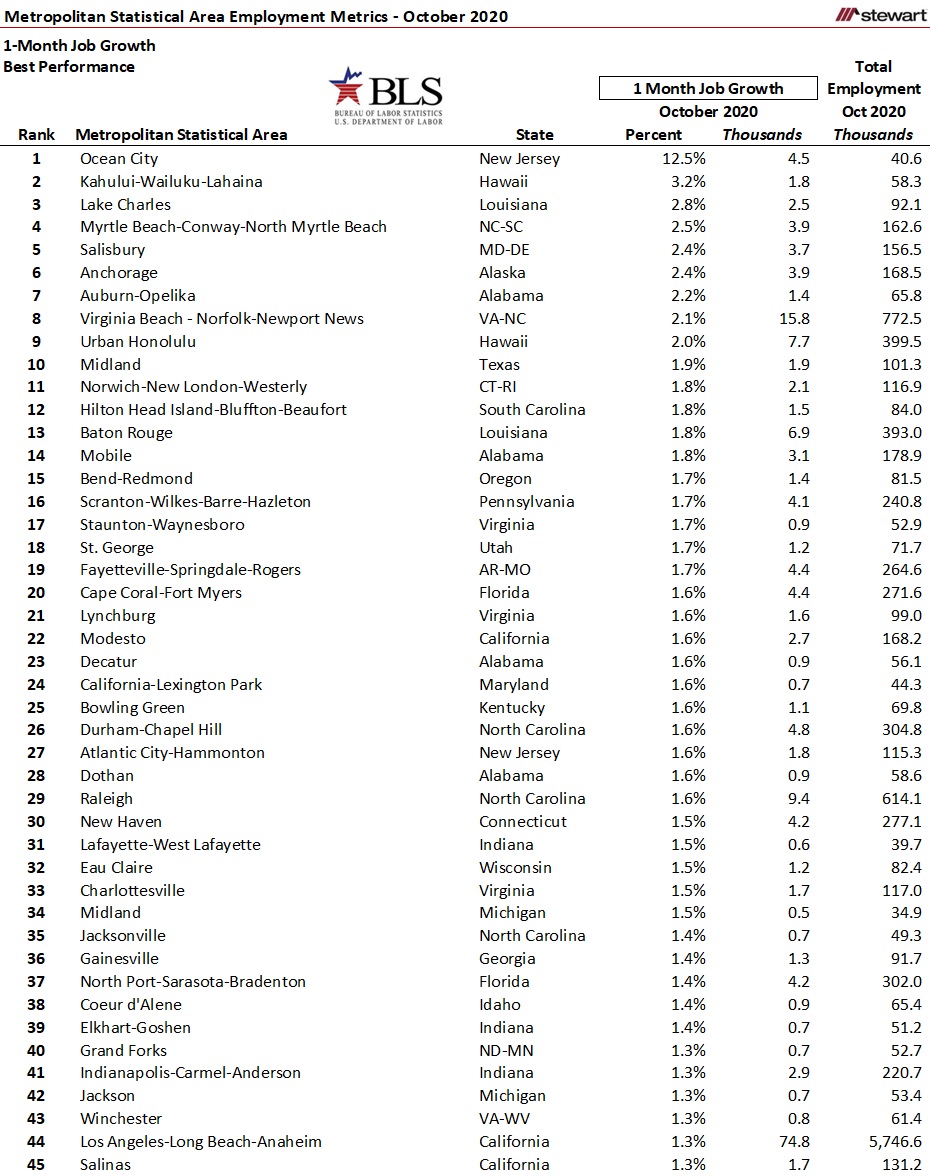 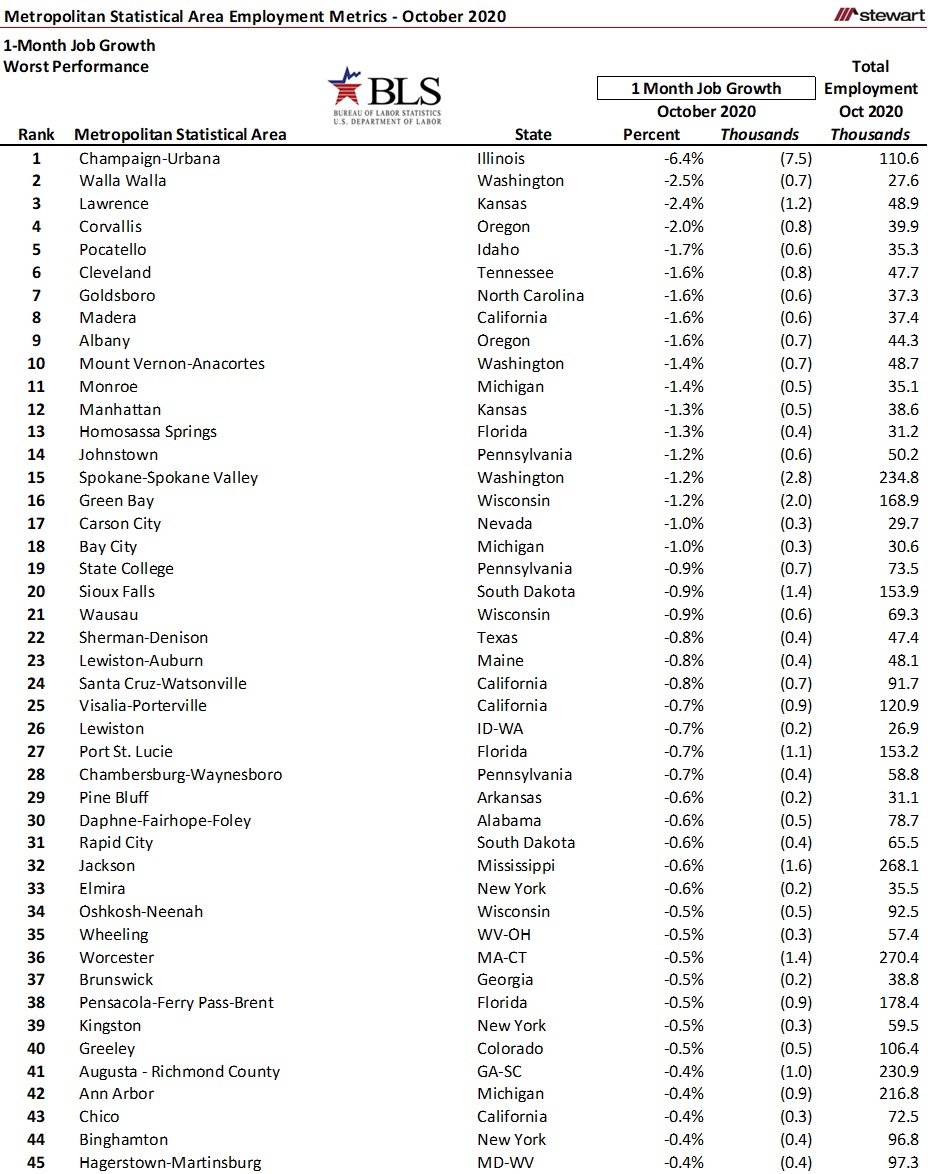 Click here for the PDF that includes all of the discussed metrics, sorted alphabetically by state and MSA.

It may be years before some metros recover jobs lost in the pandemic – potentially never for some. Growth is slowing and a another stimulus is appropriate – but given the political chess stalemate in D.C., that may not take place. Some parts of the country are well on the way to jobs recovery, a handful are there, but there are still 10 million fewer jobs across the U.S. today than in February.