The U.S. brought back 245,000 jobs in November, the lowest rate of gain since the 22.2 million plunge in jobs from March to April according to the U.S. Bureau of Labor Statistics (BLS). The November gain, however, was the largest number of new jobs compared to pre-pandemic levels since May 2015. Unemployment slipped to 6.7 percent down from 6.9 percent in October, after hitting a 14.7 percent peak in April.  U.S. job numbers are shown in the following graph on a seasonally adjusted basis. 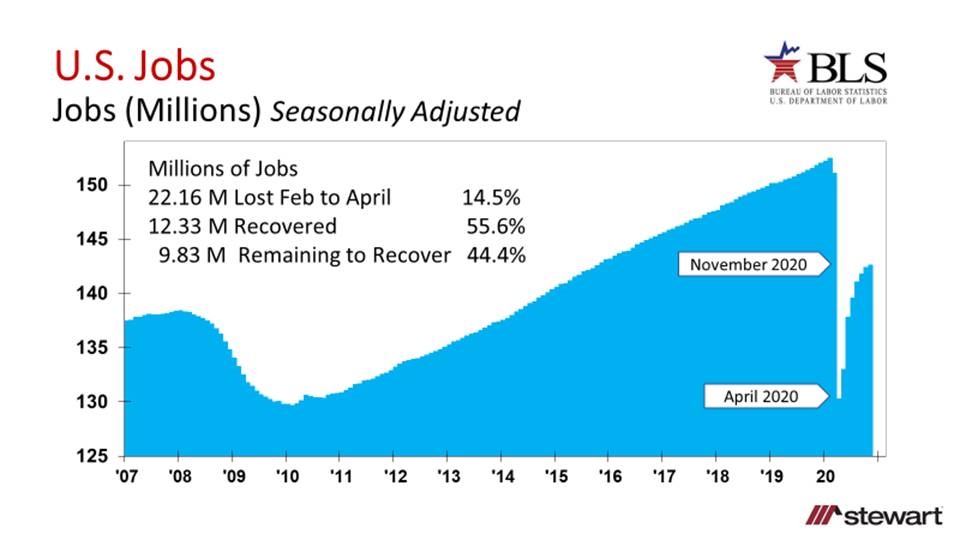 The 245,000 net job gain (preliminary) notched in November was far short of the 432,000 consensus among economists polled by MarketWatch. Though Private Sector jobs rose by a stronger-than-expected 344,000, 99,000 Government Sector jobs disappeared in the month – at least temporarily.  The Government Sector, though having lost fewer jobs initially (dropping 6.3 percent from February to the trough compared to the 14.5 decline overall for the U.S.) has shed an added 585,000 jobs since August (2.7 percent of Government jobs). The Government Sector is the only Sector posting a decline from October to November. The following table shows job loss and recovery rates by SuperSector since February, which serves as the baseline prior to the pandemic.

Leisure & Hospitality Sector jobs, which made up one-in-nine jobs prior to the pandemic, were the largest losers in the downturn, dropping by one-half (49.3 percent). This sector is a leading indicator of consumer confidence as people do not travel, take vacations, dine out for expensive meals or travel to spas or resorts as much unless they feel good about the future. As shown in the following graph, though having recovered one-half of the jobs lost, gains have essentially sputtered close to zero.   Discussion today on business travel is not when it gets back to normal, but rather how much business travel is permanently gone. See my Tweet on this at https://twitter.com/DrTCJ/status/1334177911050526723 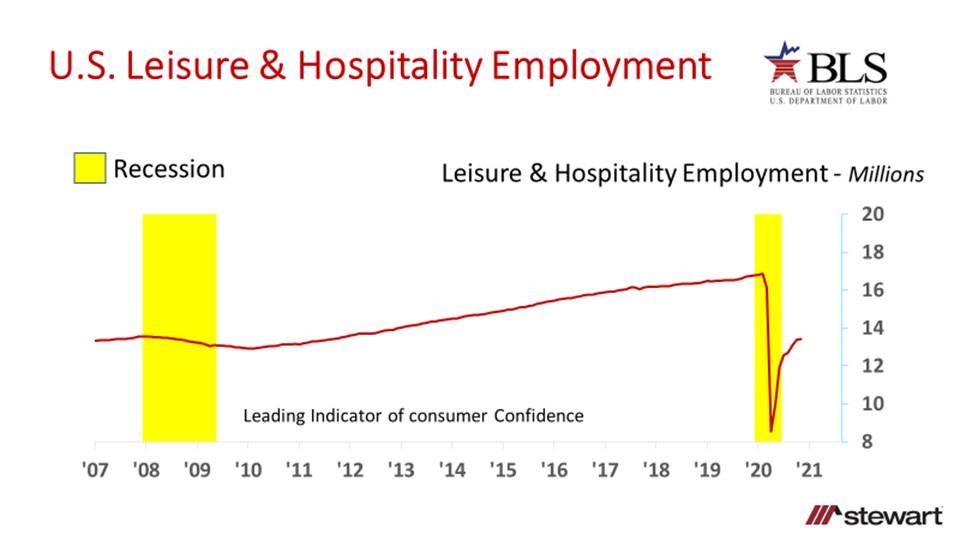 Unemployment rates vary across levels of education and demographic groups as shown in the table. Bearing the brunt of the downturn are the young, less educated and non-whites. 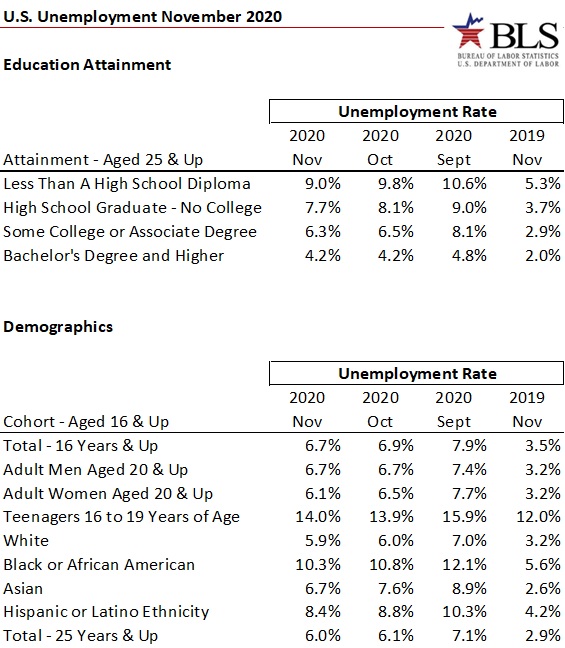 To view the mass range of employment-related data from the BLS click https://www.bls.gov/ focusing on the Data Tools TAB

Despite Christmas and holidays this month -- which typically have a positive kick to employment – stay-at-home orders and surging COVID rates portend a weak and possibly negative job growth period now through January. No doubt Yogi Berra was referring to the pandemic when he said, “It ain’t over ‘till it’s over.” Unfortunately, folks, this pandemic is not over yet. What a visionary you were Yogi.