More than 60 percent of the states and the District of Columbia (32 out of the 51 total) added jobs from October to November based on seasonally adjusted job numbers as reported by the U.S. Bureau of Labor Statistics (BLS). The first table shows the percentage change, ranked from best to worst.  While Hawaii posted the greatest gain, it also had the top potential as the state still had recovered only 12.8 percent of the one-out-of-every-five lost from February to April as of the end of October. 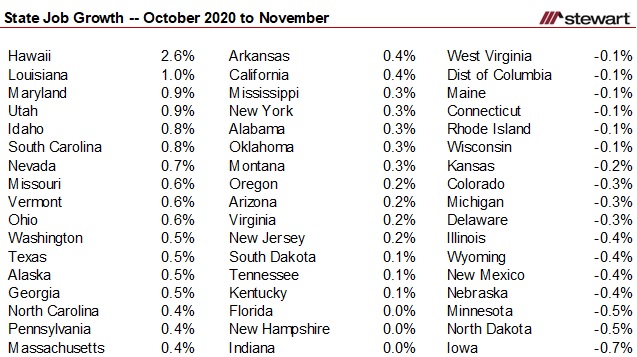 The second table shows the change in jobs for the two-month period from September to November in which 44 of the 51 States and district of Columbia added workers. States not adding any jobs in the two-months included New Mexico, South Dakota, Illinois, Wisconsin and New Hampshire. 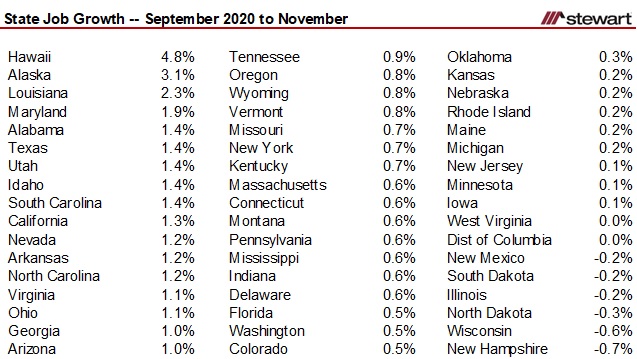 The change in the total number of jobs by state in the past 12-months (November 2019 to November 2020) is detailed in the next table.  Idaho was the lone state adding jobs in the prior 12-months – posting a 0.5 percent annual gain, with Utah second best with no change. While Hawaii had the best one-month and two-month job gain performance, it still lags the everyone else and was down 17.3 percent in November compared to one-year ago. 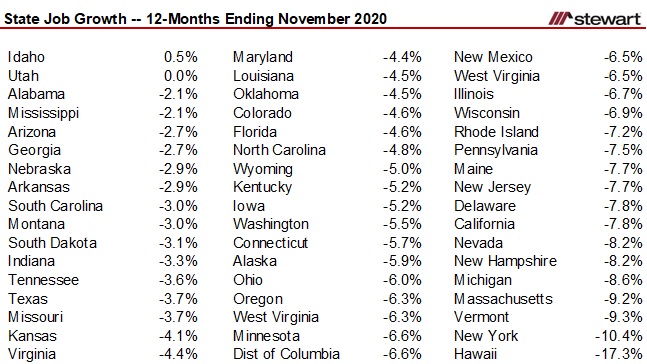 The last table shows the percentage of total jobs lost from February (pre-pandemic) to the trough, percent of lost jobs recovered by November, one-month job change from October to November, 12-month job growth/loss rates and the total number of jobs as of November.

These abysmal statistics may well linger for years in some states as the economic toll of the pandemic likely out-lives the life span of the virus Other states, however, such as Idaho and Utah, are showing impressive resilience and dynamic growth despite the contagion.