Jobs are everything to the economy and to the ultimate demand for real estate. Period. U.S. job numbers have been on a wild roller coaster ride since the pandemic, with the country still shy 9.8 million jobs when compared to February of this year. The loss and recovery rates of jobs have not been uniform across the country, however.

The latest summary of job metrics for Metropolitan Statistical Areas (MSAs) are detailed in the following tables and click here for a PDF as of November 2020 as reported by the U.S. Bureau of Labor Statistics (BLS). These data are based on seasonally adjusted data allowing for comparisons across all months.

While the recovery of jobs lost due to the pandemic continues forward, it has slowed in many MSAs. A handful of MSAs, however, now have more jobs than any time in history.

The 45 MSAs that have recovered the greatest percentage of jobs lost in the pandemic are shown in the table. Out of the 380 MSAs with monthly reported metrics, 10 have not only recovered all of the jobs lost from February to the trough, but added even more. An additional four MSAs now are back even with pre-pandemic job numbers.   As a comparison, the U.S. lost 14.5 percent of all jobs from February to the trough, has thus far recovered 55.6 percent of lost jobs as of November with 44.4 percent of lost jobs yet to recover. 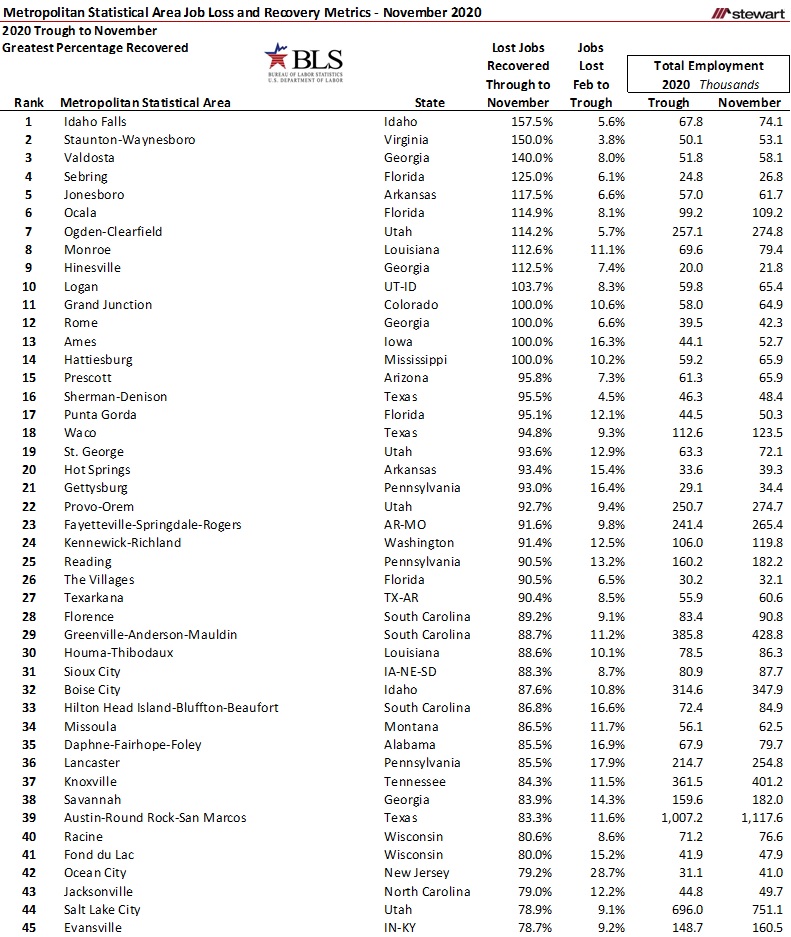 The 45 MSAs with the worst rates of job recovery are shown in the next table. Odessa, Texas, though having lost just 11.6 percent of jobs from February to the trough, has recouped only 5.2 percent of those lost. While the U.S. has faced the massive onslaught of the pandemic, oil-based economies such as Odessa and Midland (10th worst recovery rate) have also endured the headwinds of low oil prices brought on by a material decline in demand for transportation fuels. 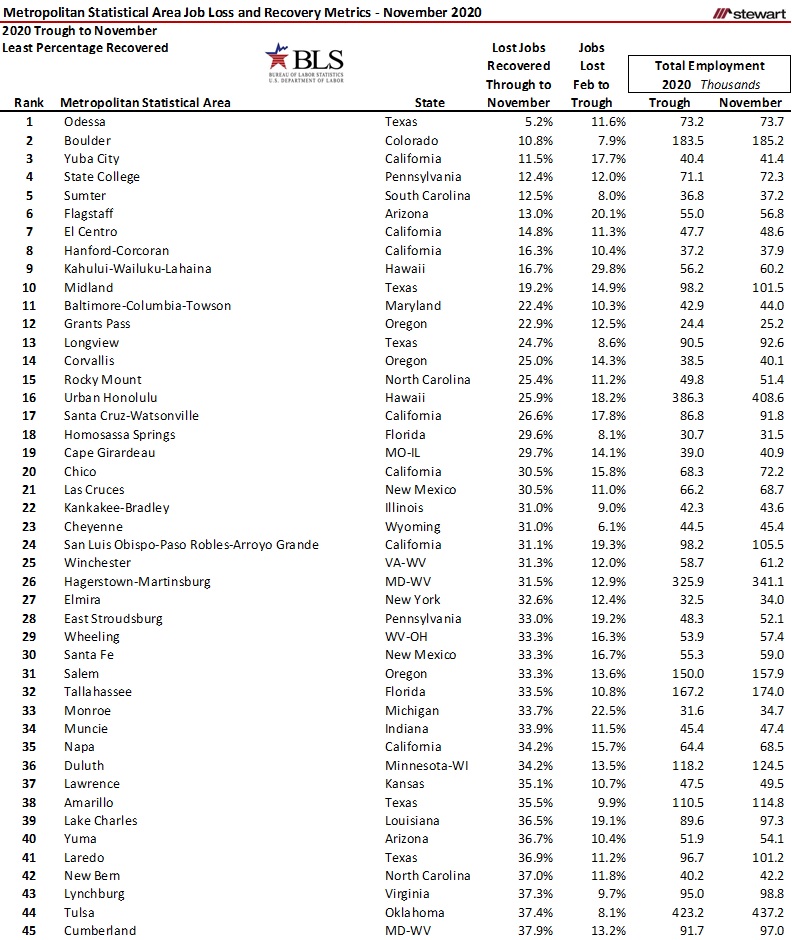 One-month job growth rates (October to November) are shown in the following two tables, with the first listing the 45 MSAs with the best job gains and the second detailing the 45 with the worst one-month performance. 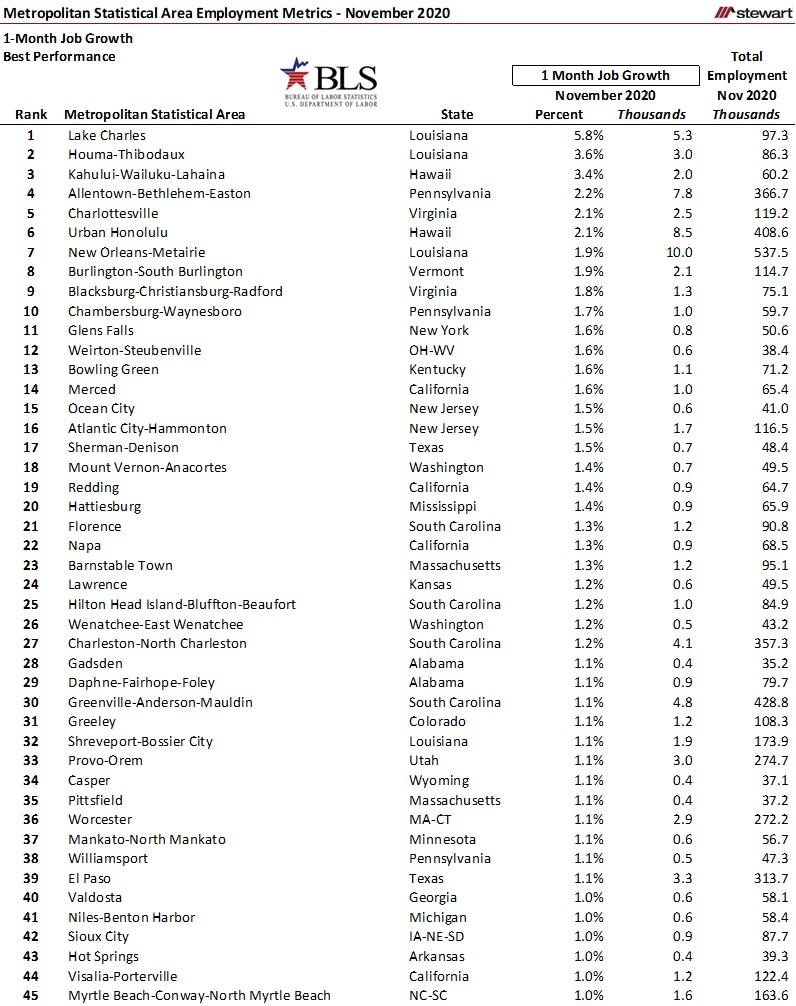 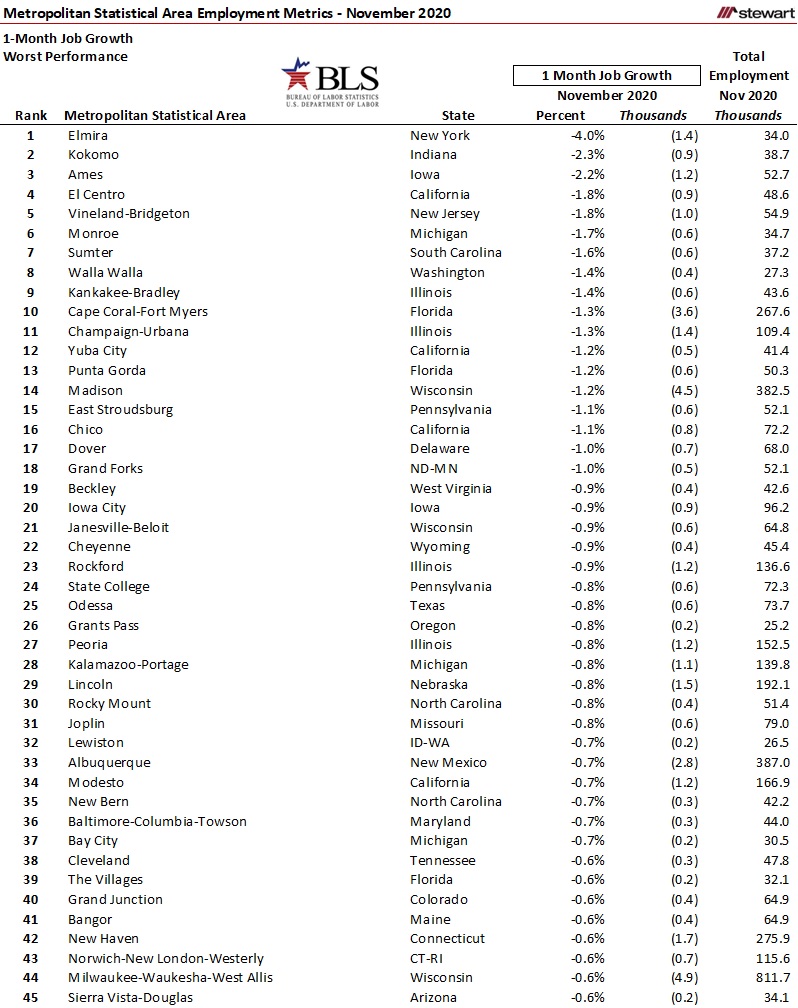 The next pair of tables are similar to the prior two, but with 12-month job gain percentages. Twelve MSAs had more jobs as of November 2020 than in November 2019 and two others were back even to the number of jobs seen one year ago. Idaho Falls, Idaho was the top performing MSA with 4.2 percent more jobs in November 2020 compared to a year prior. At the other end of the spectrum was Kahului-Wailuku-Lahaina, Hawaii, which is still missing one-out-of-every-four-jobs counted in November, 2019 -- down 25.1 percent with 20,200 fewer paid workers. 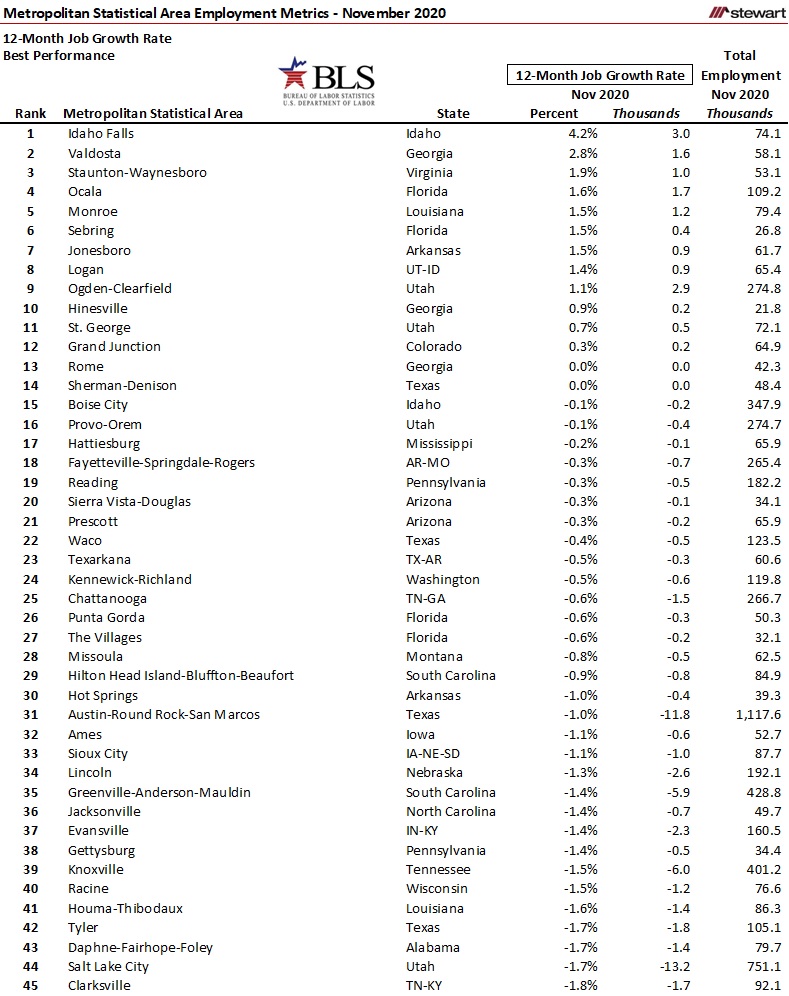 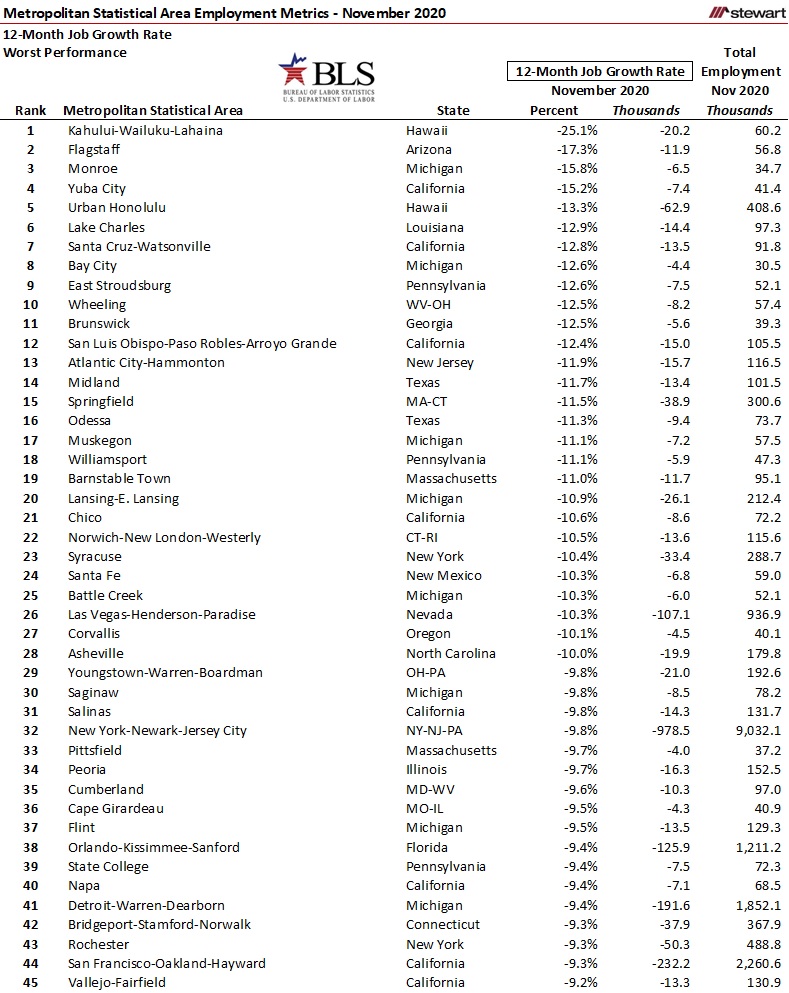 To view job metric data available from the BLS for the U.S., all 50 states and MSAs click https://www.bls.gov/data/ Click here for a PDF which includes the following metrics for all 380 MSAs with monthly data:

It is still my belief that many of these lost job numbers may not be recovered for years. An example is eating out versus cooking at home and the resulting impact on restaurants.  Prior to the pandemic, the typical American household cooked one-out-three meals (33 percent) at home. At-home meals now make up 55 percent of dining according to 24/7 Wall Street. While there is hope of returning to a more normal life-style given the now-being-distributed vaccines, Americans have changed their habits. Unknown are how many of these new habits stick and the resulting long-term impact on restaurants.

The National Restaurant Association says that 100,000 restaurants have shuttered -- either temporarily or permanently – with 40 percent of restaurant proprietors surveyed responding they will be out of business by Spring 2021 without government assistance. There were approximately 15.6 million restaurant workers at the beginning of 2020.  Given the 1+ million restaurants, that works out to approximately 15 workers per establishment, with 9-in-10 restaurants having less than 50 employees.  If 100,000 restaurants shutter permanently, then 1.5+ million workers would be out of a job -- potentially for years.

There is light at the end of the pandemic tunnel, but getting there is likely six- to 12-months away. Even when we do get back to the other side, not all jobs will have come along for the ride.