After growing for almost a decade, average credit card balances and debt dropped unexpectedly and precipitously in 2020. Total U.S. credit card debt retracted from $829 billion in 2019 to $756 billion in 2020 – an 8.8 percent decline.  While there remained 10 million unemployed workers as of year-end 2020, the 142.6 million with jobs had fewer opportunities to spend their income. Coupled with limited access to spending and untypical stimulus income, the U.S. savings rate rose and credit card balances shrunk.

Experian reported that the average credit card balance dropped from $6,194 in 2019 to $5,315 in 2020, a drop of $870 or 14.2 percent. Declines were seen in all population age cohorts as shown in the following table, including Gen Z and Millennials. 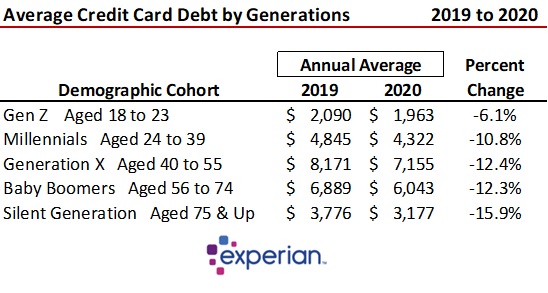 Credit card balance declines, on average, were seen in all 50 states and the District of Columbia. There was a larger percentage decline in credit balances in states with greater dollar balances -- from a statistical perspective.

The Pearson Product-Moment Correlation Statistic was -0.67919 with a P-Value of less than 0.0001. Hence, the negative relationship (higher credit balances had     a greater decline) was highly statistically significant.

The first table shows the 10 states with the greatest percentage balance drop and the relative ranks of 2019 credit card dollar balances. 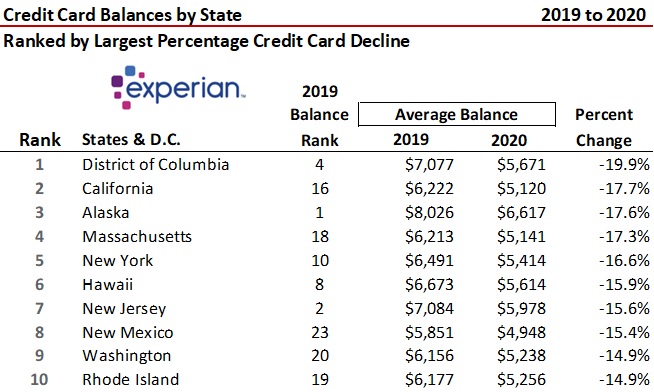 The next table shows the 10 states with the smallest percentage decline in credit balances. 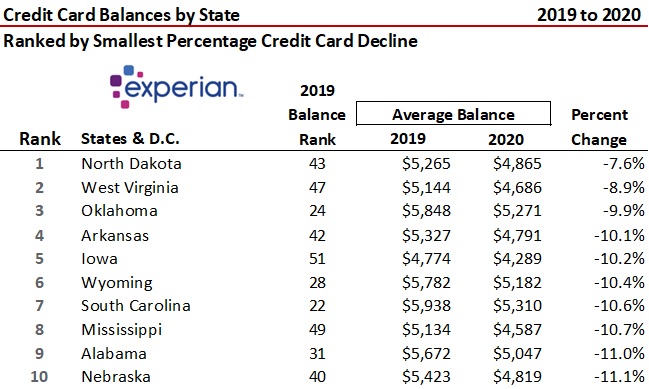 Metrics for all 50 states are shown in the next table, sorted alphabetically by state.

The Credit Utilization Ratio also significantly declined in 2020 – good news for consumers. Credit Utilization is simply the amount owed divided by the credit limit.  It is the second most important factor in the credit score calculation, trailing only payment history, and measures how much available credit is being utilized at any point in time. 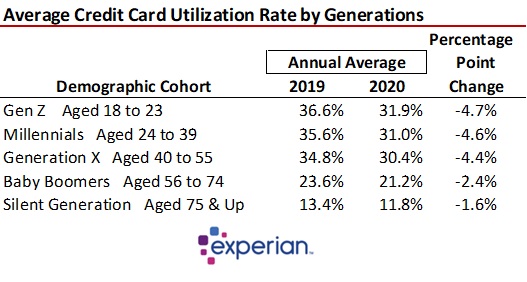 No doubt many of the initial 22.4 million that lost their jobs at the onset of the pandemic and the remaining 10 million currently unemployed expanded rather than contracted credit use.  Some likely maxed-out their credit limits rather than pay down balances. But for those that have remained employed, limited spending opportunities saw their balance sheets improve.