The U.S. brought back another 379,000 jobs in February 2021, but still has yet to recover 9.46 million of the 22.46 million jobs lost in March and April of last year at the onset of the pandemic according to the Bureau of Labor Statistics (BLS). The unemployment rate slipped slightly from 6.3 percent in the prior month to 6.2 percent, but was down substantially from the 14.8 percent peak last April.  All data are based on seasonally adjusted data unless otherwise noted.

Total employment numbers on a seasonally adjusted basis are shown in the graph commencing January 2007. The U.S. essentially lost every job added (numerically) since the trough of the Great Recession and still is short more than four-in-10-jobs lost. 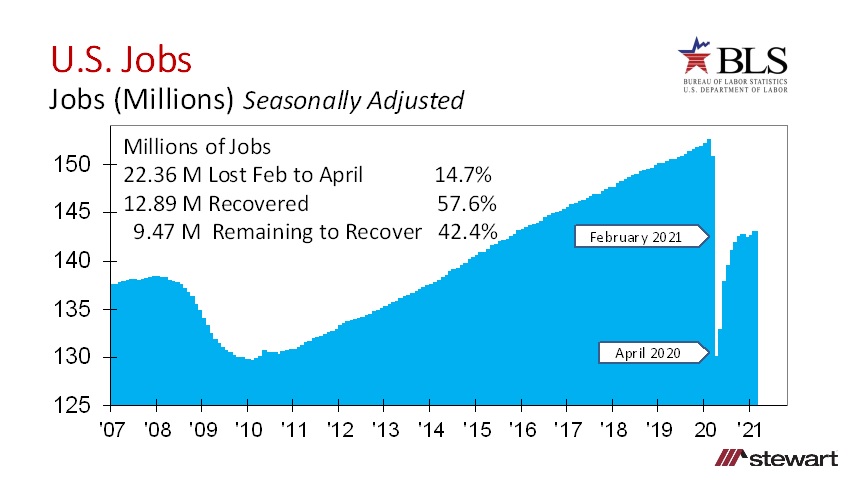 Employment changes across the BLS-defined Supersectors are shown in the table.

Not all Supersectors posted job gains in February 2021. The first two numeric columns shows the net change in jobs from January to February 2021 with the first noting the net change in jobs (in thousands) and the second percentage change. Leisure & Hospitality was the big gainer, bringing back 355,000 in the month for a 2.7 percent growth rate. Government, however, shed 86,000 jobs, a 0.4 percent one-month decline.

The relative percentage of total jobs per Supersector for February 2021 and February 2020 are detailed in the next two columns.  Despite job reductions, the Government sector still makes up 15.0 percent of all jobs.

The Lost-to-Trough column was calculated by subtracting the lowest employment month (spanning March to October 2020) from employment as of February 2020 – the baseline prior to the pandemic. The greatest loss was in Leisure & Hospitality, shedding one-half of all jobs (48.6 percent).  The smallest percentage of jobs lost was 3.1 percent in Financial Activities followed by the 6.7 percent of drop in Government jobs.

The Trade-Transportation-Utilities sector now has the best recovery rate having recouped 76.3 percent of all jobs lost in the pandemic. No doubt the $600 stimulus checks received in January added to January and February jobs in Trade-Transportation-Utilities. This will accelerate significantly given the passage of the $1.9 trillion stimulus which includes $1,400 direct payments to most Americans and their dependents. Mining & Logging has a zero recovery rate – but that includes oil and gas production which has seen serious headwinds due to reduced travel and energy demand.

The last column shows the number of jobs that existed in February 2020 that have yet to be recovered. Almost two-thirds (64.8 percent) of the still-missing jobs are in the Leisure & Hospitality, Government and Education & Health Services sectors.

Average hourly earnings are detailed for private nonfarm payrolls by industry in the next table for February 2020 and 2021. The largest hourly wage gain was in the Financial Activities sector, up 7.8 percent year-over-year, with Mining & Logging (which includes oil & gas) up the least at 1.2 percent.   Highest paying was Information at $44.77. Lowest was the Leisure & Hospitality sector at $17.28. 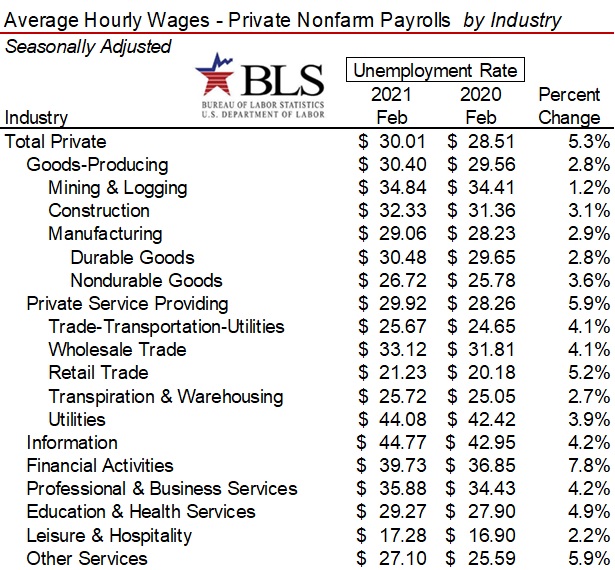 Unemployment rates are shown across demographic and educational attainment cohorts in the next table with material differences across both. An estimated 6.9 million people that wanted a job in February were not counted as either unemployed or in the workforce. An added 6.1 million workers were classified as Employed Part Time for Economic Reasons, meaning although they preferred to  work fulltime, worked just parttime due to hours having been reduced or the inability to find a fulltime job. A huge 13.3 million people reported they were unable to work because their employer closed or lost their business due to the pandemic -- down from 14.8 million in January. 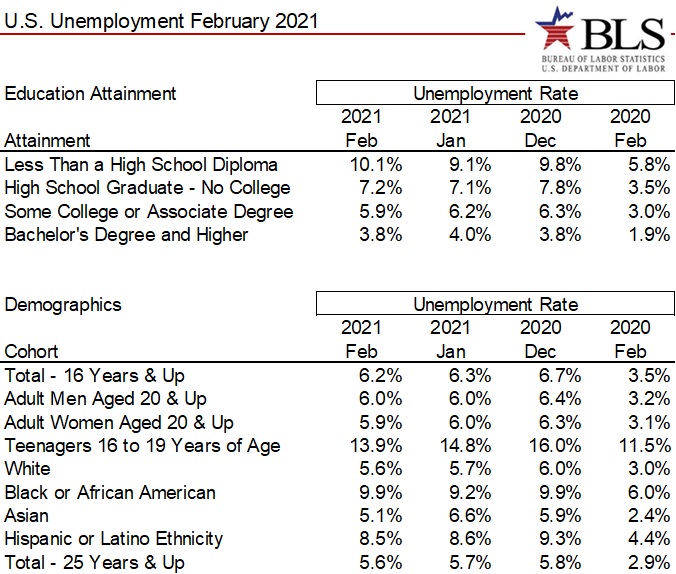 Unemployment rates by Occupation are detailed in the next table, comparing February 2021 to February 2020. Data are not seasonally adjusted. 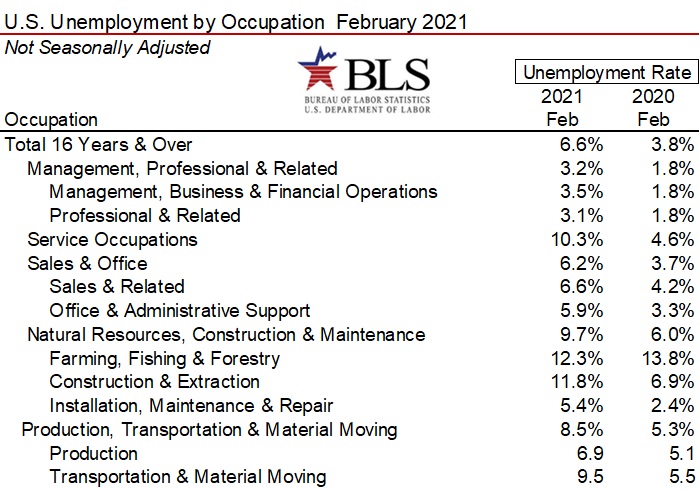 Unemployment Rates by Industry & Worker are detailed in next table. Data are not seasonally adjusted. Mining, Quarrying, and Oil & Gas Extraction is sector, with the unemployment rate up from 5.7 percent a year ago to 13.5 percent – more than double. 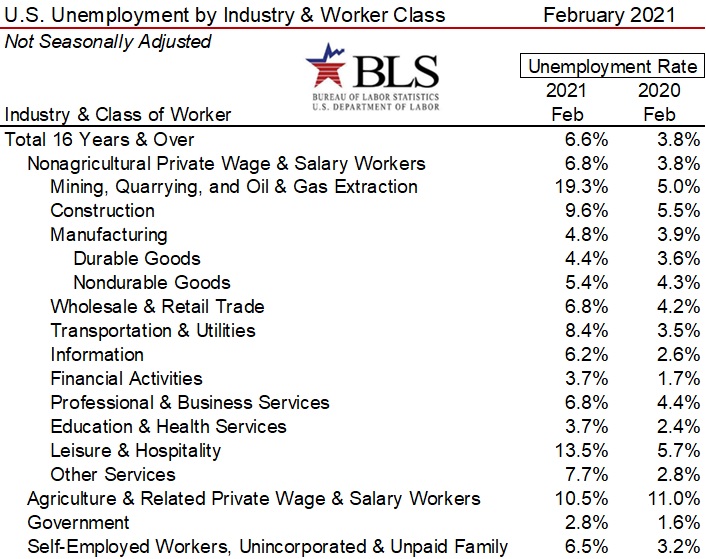 To read the latest Employment Situation release from the BLS click https://www.bls.gov/news.release/empsit.nr0.htm

All of this will change as vaccination and immunity levels rise and the $1.9 trillion stimulus drives the economy and The Brookings Institute estimates that the stimulus will boost U.S. GPD growth an additional 4 percent by the end of 2021 and another 2 percent by the end of 2022 – resulting in more jobs and higher wages. Not all sectors, however, will benefit equally.  Nor is the growth rate to be ongoing, once the stimulus is spent. Economic uncertainty beyond the short run includes inflation, rising interest rates and the need to service the added governmental debt (increased taxes) – none a positive to the economy in the long run.