The U.S. dropped a record number 22.4 million jobs last March and April at the onset of the pandemic and has yet to recover 8.4 million. Only two states now have more jobs than anytime in history: Idaho and Utah. The data following are from the latest release of employment numbers for all 50-states and the District of Columbia by the U.S. Bureau of Labor Statistics (BLS). All data are stated using seasonally adjusted numbers allowing comparisons each month across the year.

The first table summarizes the latest change in job growth rates (and losses) for the 12-months ending March 2021. As of the end of March 2021, Idaho had 1.4 percent more jobs than in March 2020 and Utah was up 0.9 percent. All other states and the District of Columbia had from 1.1 percent to 16.0 percent fewer jobs over the same period. 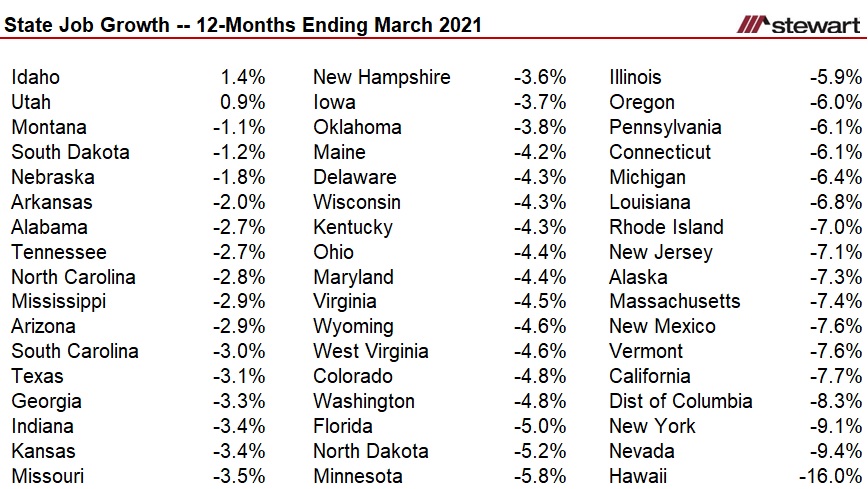 The next table shows the same data but for just one-month from February to March this year. These data portend a much more positive economy as just one-state ended up with fewer jobs (Alaska, down 0.1 percent) and only state with no change – Virginia.  All other states and D.C. notched one-month job gains ranging from a low 0.1 percent (Idaho, D.C. and Alabama) to a high of 1.3 percent in New Mexico. 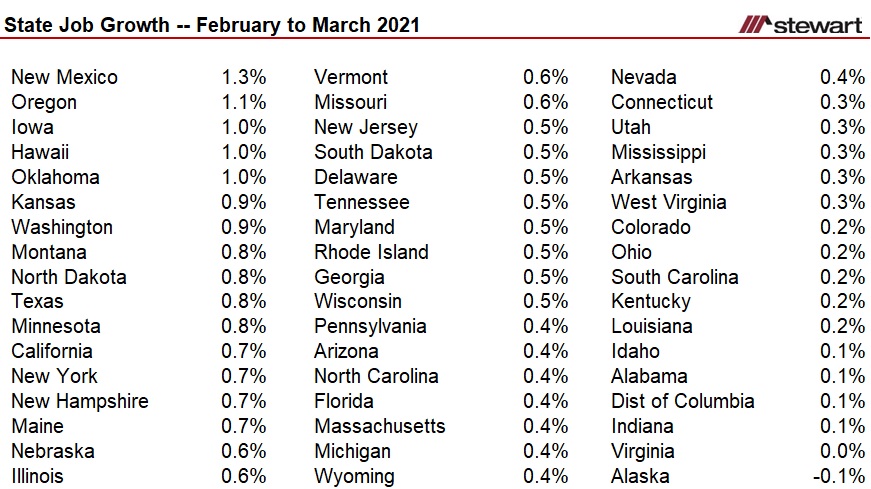 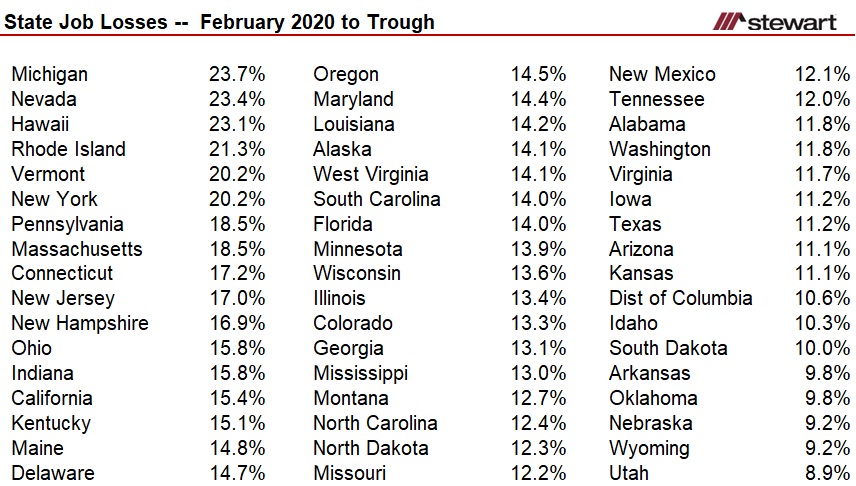 The percentage of jobs lost from pre-pandemic to the trough that have since been recovered are listed in the next table. Idaho and Utah have more jobs than anytime in history, while D.C. has recouped just 1-in-6 jobs lost (17.1 percent). 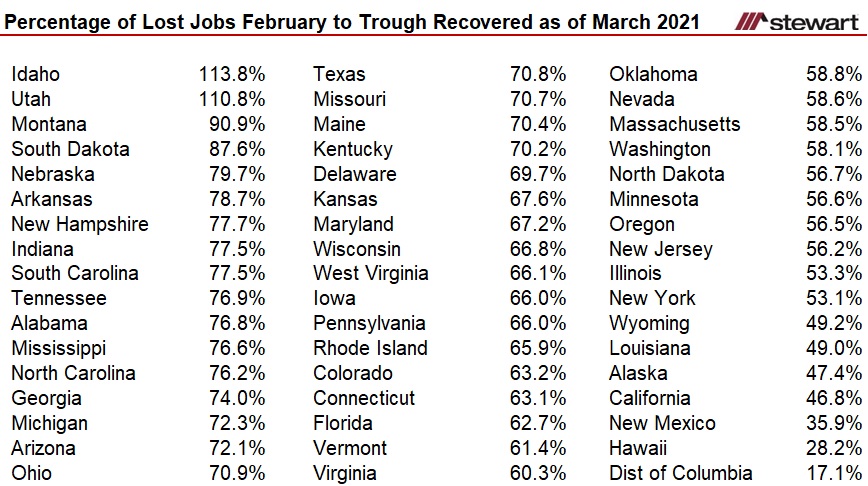 Previously discussed metrics are shown for all states and the District of Columbia. 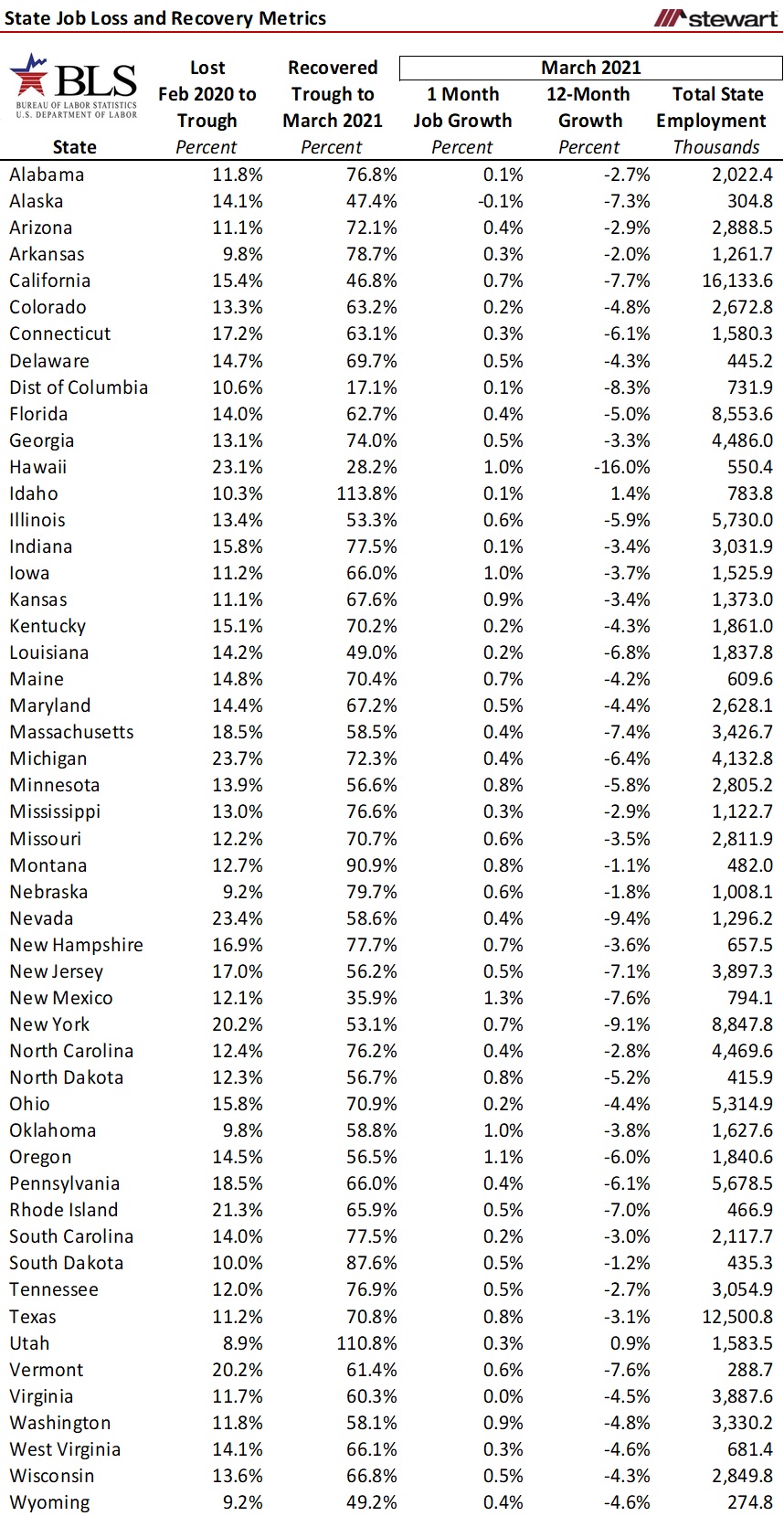 The pandemic treated each state differently and the same is true for the recovery. As done frequently, the TINSTAANREM axiom is invoked — There Is No Such Thing As A National Real Estate Market or economy. Ditto with respect to job growth across the country as every state and locale is different.  Given an ongoing exodus from some states, it may be years before pre-pandemic job numbers are seen again.