With more than 10,000 people turning 66 years of age every day (full-retirement age for Social Security benefits), retirement remains a growth industry.  Unlike many jobs which constrained where people had to reside, retirement opens the entire country (and world) as options. Some states, however, offer better opportunities, demographics, climate, healthcare and cost of living options than others.

To ascertain which states are likely best candidates for those retirees looking to relocate, 24/7 Tempo (part of the 24/7 Wall Street Media Group) created an index supported by 22 measures of retirement friendliness. Major categories included environment, health, social support and demographics -- each weighted equally.

Based on 24/7 Tempo’s methodology, rankings from best to worst are shown in the table with details on several factors including cost-of-living. The methodology utilized ranked sunny Florida best overall and not-so-sunny Maine second best. Worst was Utah at 50th position, yet the Beehive State had the second best 12-month job growth in the country, outperformed only by Idaho. 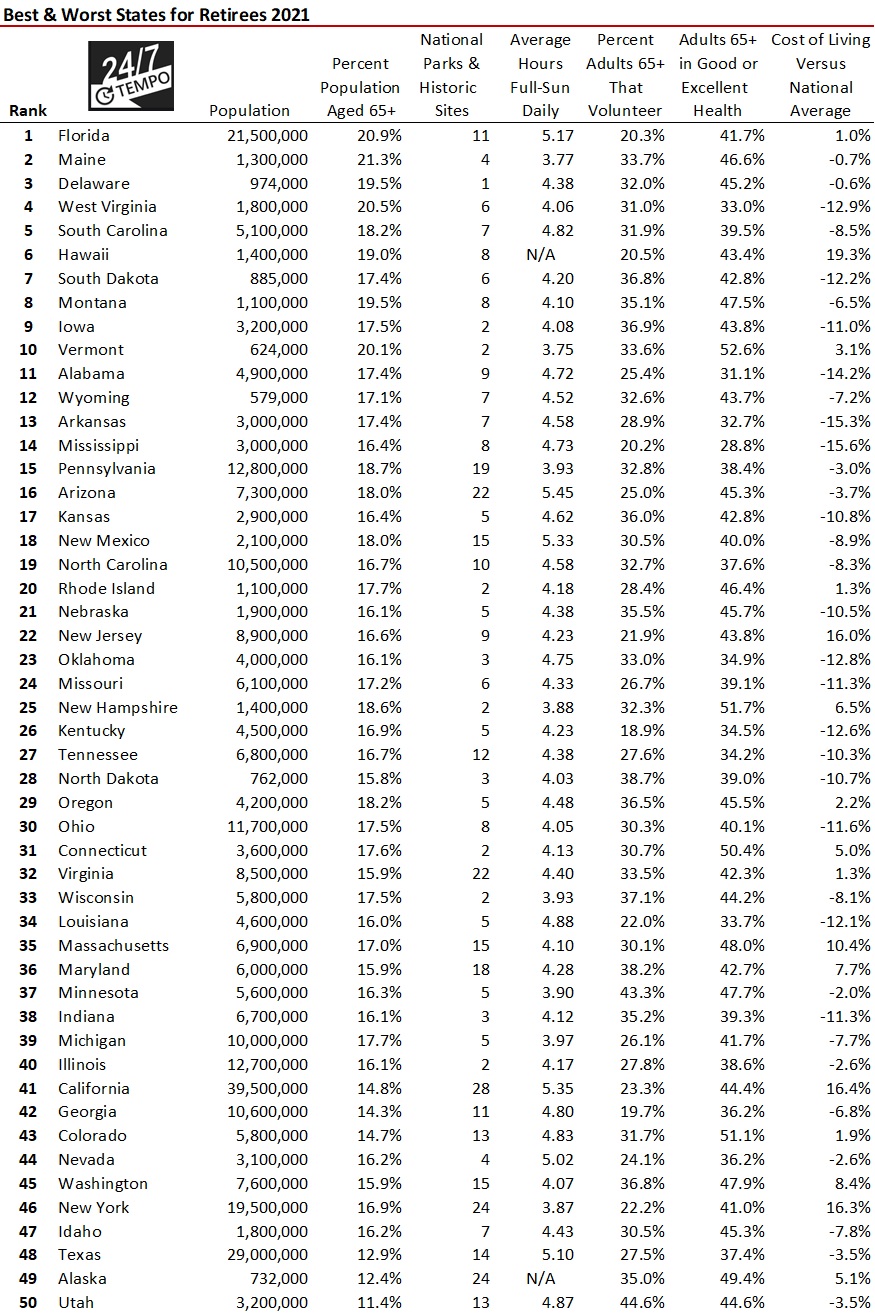 For those retirees focused exclusively on cost-of-living, the next table ranks states from least expensive to most expensive based on the cost-of-living percentage difference versus the U.S.  West Virginia, which ranked 4th best overall, also had the 4th lowest comparative cost of living.

For those looking to live in a sunny environment, the last table ranks the states from most to least sunshine hours. This was taken from data collected by the Center for Disease Control based on the average kilojoules of sunshine per square meter from 1979 through 2011. These were then converted to kilowatt hours per square meter with a full sun-hour defined as period in which the intensity of sunlight exceeds 1,000 watts per square meter. Data were available only for the 48 contiguous states.

While many retirees will retire in place (perhaps near family, friends and life-long community), others will be relocating. There are obviously other factors that come into play including state and local taxes not specifically detailed in this study.  Use of other metrics would likely alter these rankings.

As an economist, there are only seven states I would consider for retirement -- those with zero state income taxes. These include Alaska, Florida, Nevada, South Dakota, Tennessee, Texas and Washington. Some of these seven would then be excluded as it also needs to be warm.