Jobs are everything to the economy. Period. While the U.S. lost 22.4 million jobs in March and April 2020, they have yet to recoup 8.2 million. Unfortunately, employment numbers are released just once a month based on the Bureau of Labor Statistic’s Payroll or Establishment Survey. That survey asks employers to report employee counts for the payroll that includes the 12th of the month. Employment numbers for any given month could be based on data that may be up to 18 to 19 days old when issued. Thus even before being released to the public the data may already be stale.

A summary of monthly job gains and related unemployment rates are shown in the table commencing January 2020. Even though the U.S. added 266,000 net additional jobs in April 2021, the unemployment rate ratcheted up to 6.1 percent. 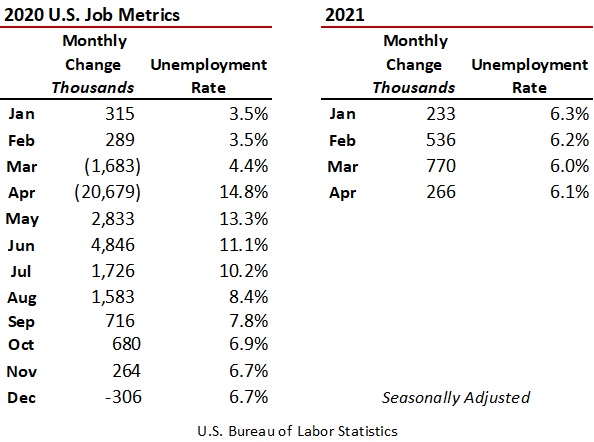 More timely than employment data are the weekly tallies of the number of people applying for unemployment benefits, also  known as Initial Claims. The U.S. Department of Labor (DOL) reports weekly initial claims on both a seasonally adjusted and unadjusted basis.

The next two graphs show seasonally adjusted weekly claims but with differing scales.

This first graph shows the weekly claims from 2001 through May 1, 2021. The COVID-19 pandemic commencing March 21, 2020 is so magnanimous it makes the increase in initial claims during the Great Recession look like a small speed bump in comparison. Though the data originate from the DOL, these were downloaded from the St Louis FRED data base. 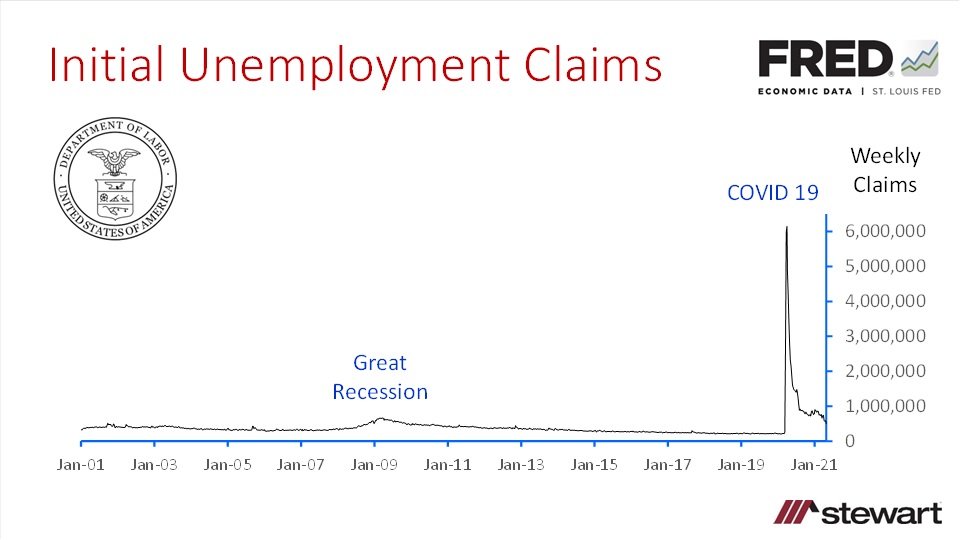 The second graph is the same as the first, but with the weekly scale capped at 700,000 claims. 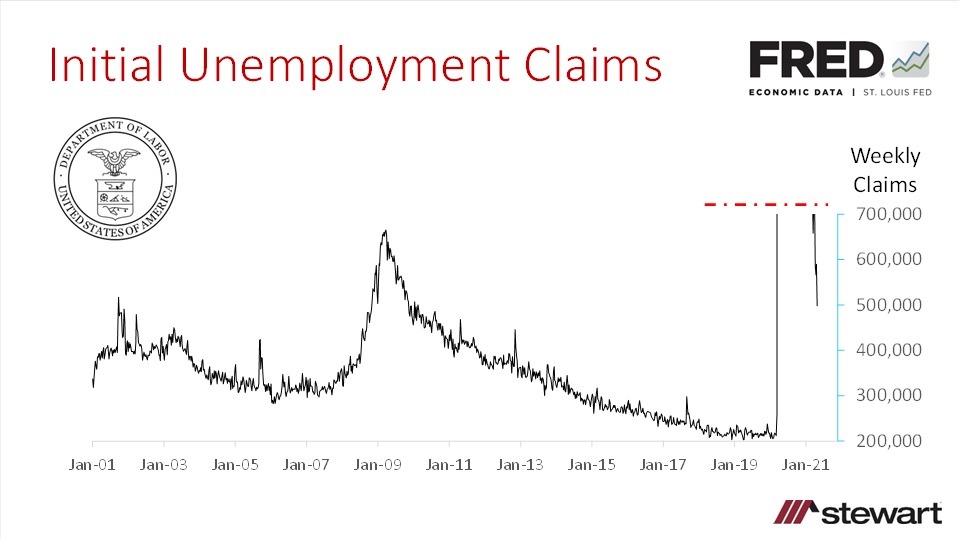 Historical weekly average claims since 1971 are shown in the following table on a seasonally adjusted basis. The year prior to the pandemic, 2019, had robust job growth and minimal  job losses with an average of just 218,019 initial claims per week. To find a lower initial claims year requires going all the way back to 1969. 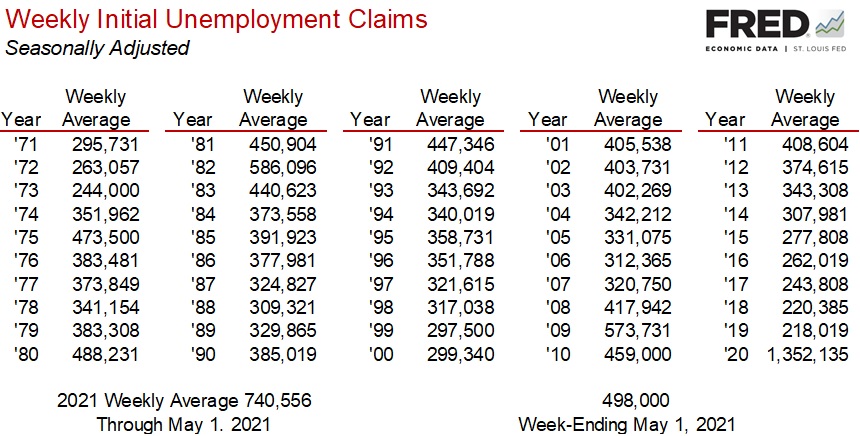 The primary DOL site analyzing initial claims can be viewed at https://oui.doleta.gov/unemploy/claims_arch.asp

While the number of initial weekly unemployment applications are trending down, the latest 498,000 as of the week ending May 1, 2021 was still 2.3 times greater than the weekly average across all of 2019. Some economists attribute the continued high initial claims rate to the greater than normal unemployment benefits currently available. Not only do unemployment recipients receive an average $320 weekly state benefit, but also an additional $300 weekly federal benefit that was included in the $1.9 trillion American Rescue Plan passed by Congress and signed by President Biden. That equates to making $15.50 per hour for not working  ($15.95 hourly according to the NY Post calculations), incenting some not to return to the workplace until federal benefits expire September 6th this year.  Already, the Governors of two states with tight labor markets -- Montana and South Carolina -- have announced their intention to opt out of the federal program and reduce benefits this June – with other states potentially following.

This wild employment-unemployment roller coaster ride is yet to pull back in the station, so keep that seat belt tightened.