Lofty expectations by economists and government officials called for a strong and robust April jobs report from the U.S. Bureau of Labor Statistics (BLS), including:

With a massively disappointing 266,000 new jobs added in the month – just one-third of the lowest estimate – forecasts by the experts were the largest miss in decades. While not a low number in ordinary times (2019 saw an average 168,000 added jobs each month) most anticipated a significant recoupment of jobs in April given the $1.9 trillion American Rescue Plan (ARP) passed by Congress and signed by President Biden. Included in ARP was a $1,400 direct payment to most Americans intended to stimulate the economy.

The U.S. has now recovered all but 8.2 million of the 22.4 million jobs lost in March and April 2020. Total employment using seasonally adjusted data from the BLS are shown in the graph. 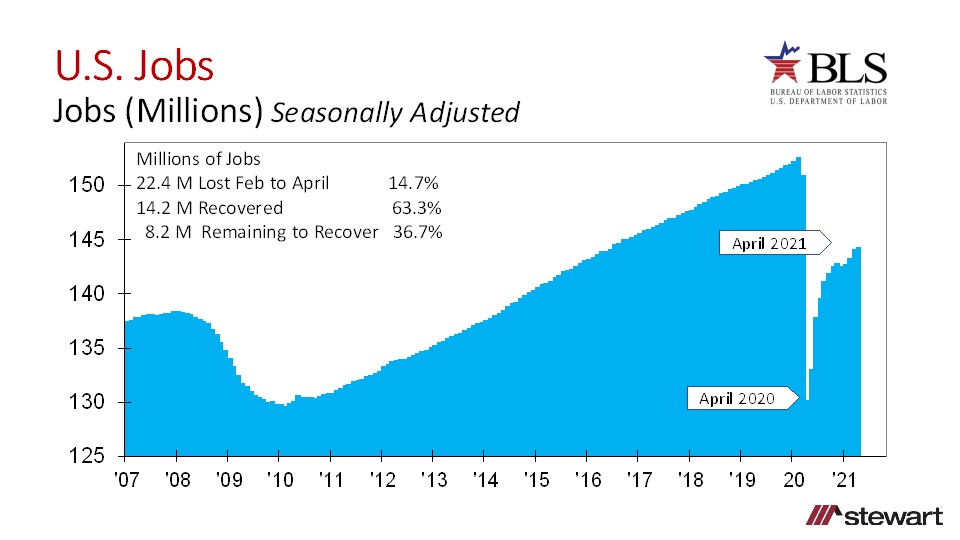 The recovery, however, is not equal across the differing types of jobs. The following table shows the net change in jobs from March to April 2021 by Supersector, based on seasonally adjusted data. 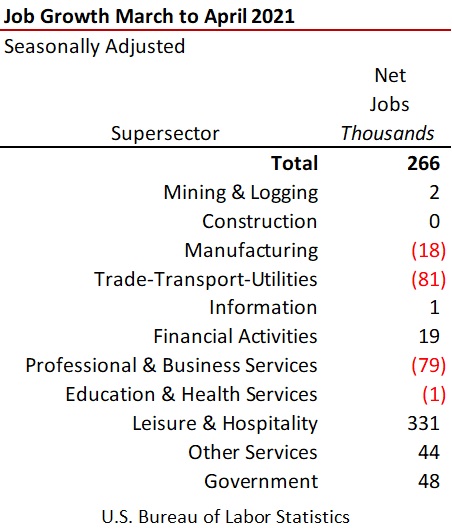 The next table shows Supersector employment metrics. The U.S. added 14.147 million jobs since April 2020 -- the trough of the pandemic-driven recession -- for a gain of 10.9 percent.  Still yet to be recovered are 8.215 million jobs that were in place in February 2020, prior to the pandemic.  Construction is the best recovered sector, having recouped 82.4 percent of the jobs lost from February 2020 to the trough. Least recovered is Government, down 1.244 million jobs vs February 2020.  Leisure & Hospitality, which lost the greatest percentage of jobs and the most jobs, still has 2.848 million positions missing.

Wages have fared well for those that remained employed. The table shows the average hourly wages for April by Supersector for the 2019 to 2021 period (which steps over the disintermediation during the heart of the pandemic) and for the latest 12 months. For the 24-month span, every sector posted an increase in hourly wages with Mining & Logging (which includes oil & gas production) up the least at 5.9 percent. Greatest gain was in Financial Activities up 11.5 percent. The best paying sector remains Information and Leisure & Hospitality with the lowest hourly wage. 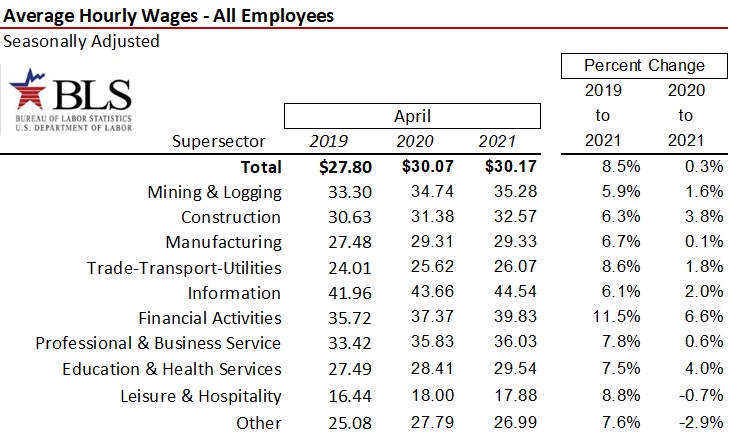 Completely unexpected in the jobs report was an uptick in the unemployment rate from 6.0 percent in March to 6.1 percent in April. Several will argue that many people prefer to remain on the better than normal unemployment benefits thanks to a $300 federal weekly provision in the ARP in addition to state unemployment benefits. The state and federal benefits combine to yield a payment of  $15.50 per hour for not working  ($15.95 hourly according to the NY Post calculations), incenting some not to return to the workplace until federal benefits expire September 6th this year. The Governors of multiple states with tight labor markets including Alabama, Arkansas, Iowa, Mississippi, Montana, North Dakota, South Carolina and Tennessee have announced their intention to opt out of the federal program and reduce benefits this June – with other states potentially following.

Unemployment rates for education and demographic cohorts are detailed in the next table. The Federal Reserve has stated in the past that an unemployment rate from 5.0 percent to 5.5 percent corresponds to full employment. 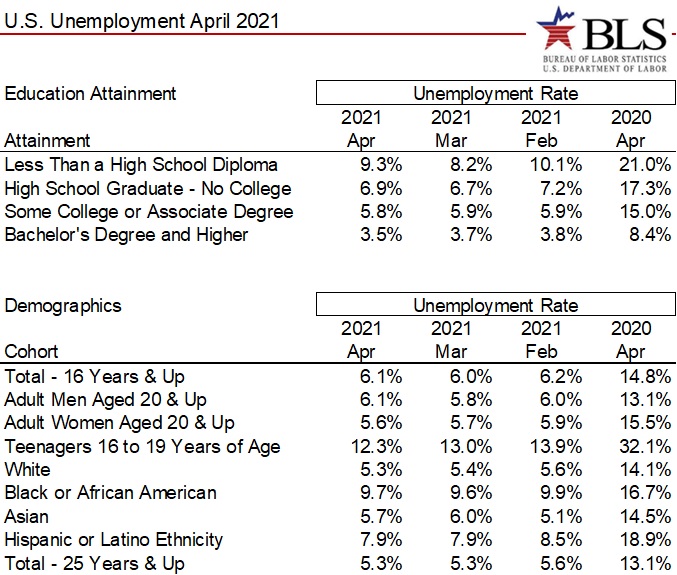 The next two tables detail unemployment rates by Occupation and by Industry & Worker Class. These data are only available in a non-seasonally adjusted for, so only a year-over-year comparison is appropriate.  April 2020 was the pandemic caused trough in U.S. employment. 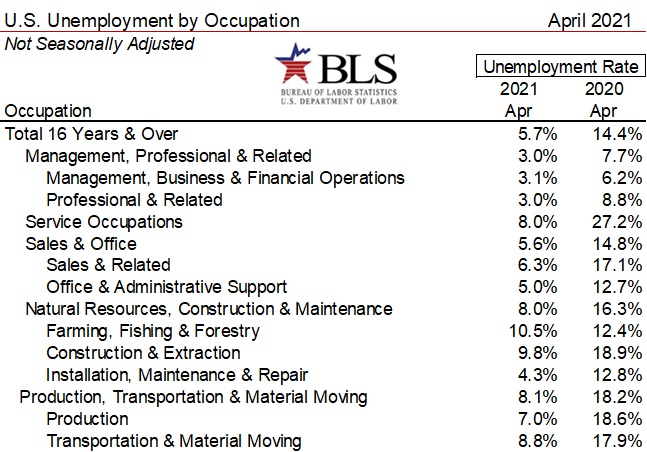 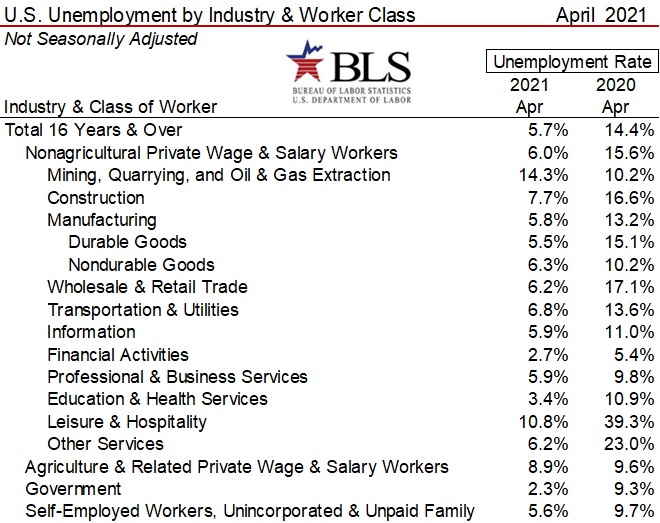 Some of the jobs shed during the pandemic are permanently gone as businesses permanently closed. Other firms changed the way business was done to survive resulting in fewer needed employees.

The pandemic and its impact on the economy continues. Those that kept their jobs have generally fared financially well.  Yet others – both people and businesses – are still struggling. Ted