Mirror Mirror on the Wall, Which Metros are the Most Economically Recovered of All -- From the Pandemic, that is, as of April 2021

Yesterday this blog talked about state employment levels using fairy tale rhetoric. Today that discussion rachets down the to the Metropolitan Statistical Area (MSA) level.  Reiterating from yesterday, imagine if the past 14 months had just been a bad fairy tale rather the most severe global pandemic in more than 100 years. But, that is indeed fairy-tale land.

While Mirror Mirror on the Wall is not the exact words from the 1938 release of Snow White, it is the appropriate question to ask regarding which metros across the U.S. have recovered the most and least since February 2020 – the month prior to the pandemic.

The answer to Mirror Mirror on the Wall, Which Metros are the Most Recovered of  All is detailed in the following table listing the 40 MSAs with the best percentage change in jobs from February 2020 through April 2021. All metrics are based on the just-released April employment data from the U.S. Bureau of Labor Statistics (BLS) using seasonally adjusted data.  Just 15 of the 380 metros with monthly data reported by the BLS posted a gain in total jobs comparing April 2021 to February 2020 – the month prior to the pandemic. Two states posted almost unbelievably strong job recoveries: Idaho and Utah. Amazingly, Utah, which has a total of five MSAs, all are included in the 40-best job performance MSAs in the country, with four of the five ranked 10th best or better. Though Salt Lake City still had a job deficit when compared to February 2020, it ranked 17th best overall and is only down 0.3 percent from the pre-pandemic level.  Idaho’s five total MSAs all had more jobs in April than any time in history – each ranking in the top 12. 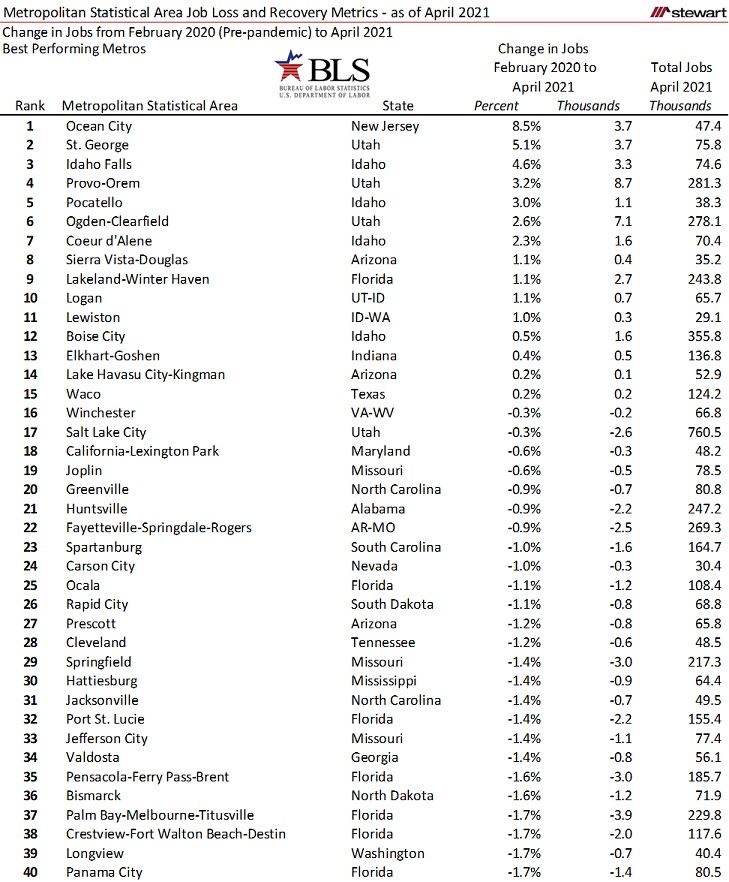 The next table shows the 40 MSAs with the greatest percentage decline in total jobs from February 2020 to April 2021. Trailing the pack is the Kahului-Wailuku-Lahaina MSA in Hawaii that was short 1-in-every-4 jobs (24 percent) this April versus prior to the pandemic. Several of these MSAs had a greater concentration of jobs in the Leisure & Hospitality sector and also oil and gas production (a subset of the Mining & Logging sector), which still lag the recovery seen in other employment categories. 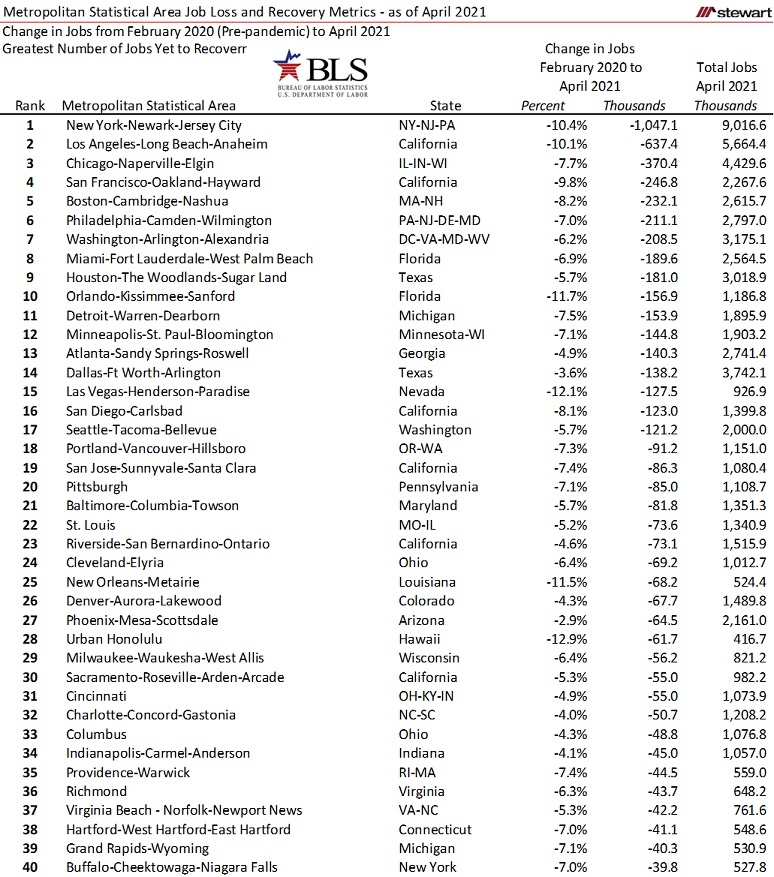 One-month job growth (and loss) percentages from March to April 2021 are shown in the next two tables for the best and worst 40 MSAs. 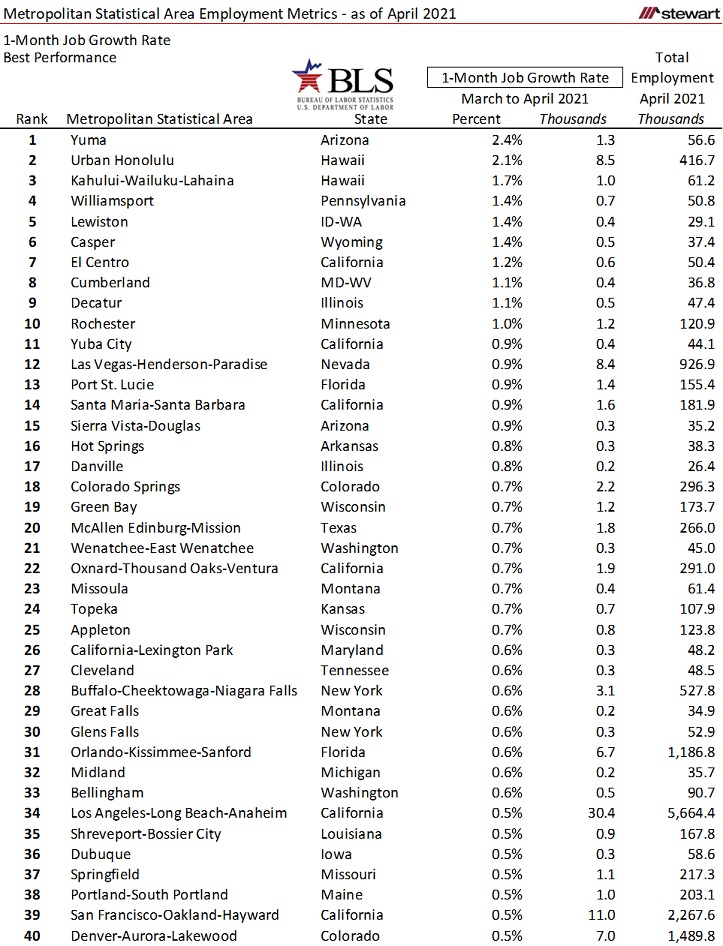 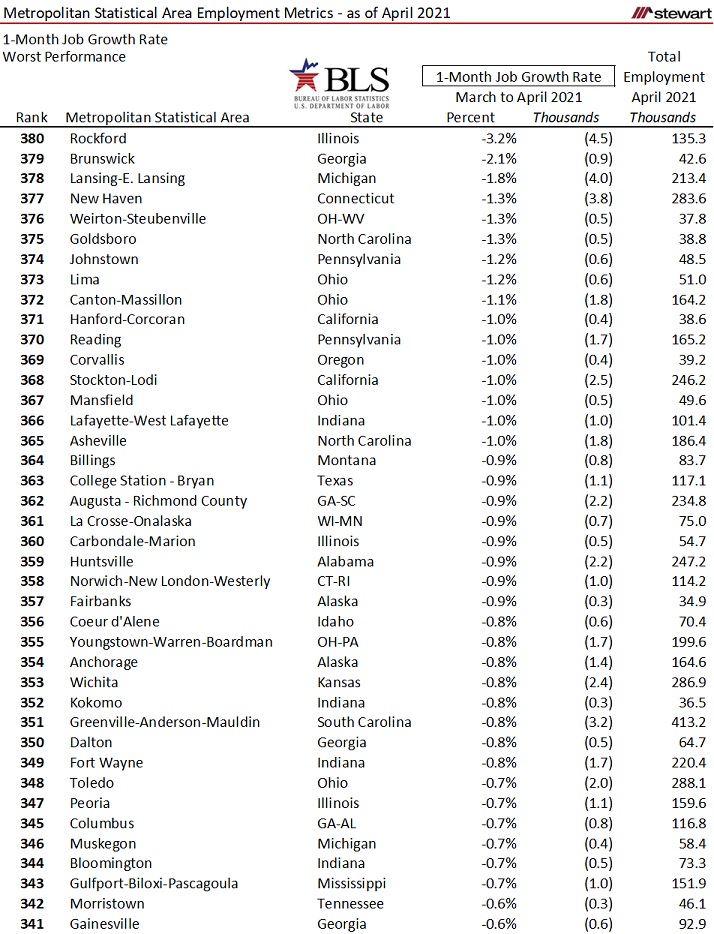 Click here for PDF of metrics for all 380 MSAs.

While the pandemic continues to evolve, each day looks more promising – including jobs.  After all, jobs are everything to the economy as long as we are not living in fairy tales. Yet to be seen is if and which MSAs the pandemic has permanently altered long-term growth trajectories.