May 2021 State Job Metrics in a Recovering Pandemic Landscape

In March and April of 2020 the U.S. lost the most and greatest percentage of jobs in history due to the pandemic. The record federal government stimulus, however, muted the immediate economic impact and even resulted in the highest savings rate in the history of the country. Recovery is underway, but like the job losses last year, the recovery is not equal across the U.S.

State employment metrics are shown using the latest data available from the U.S. Bureau of Labor Statistics (BLS) based on seasonally adjusted data which allows comparison of any month to another. The BLS does revise these data from one-month to the next and also restates each year in the 1st quarter of the following year.

The first table shows the total change in state employment from February 2020 (the month prior to the pandemic) to May 2021, latest data available. Only two states today have more jobs than prior to the pandemic – Utah and Idaho with 1.4 percent and 1.2 percent more jobs, respectively. Only one state remains down more than 10 percent in employment, Hawaii, at 15.1 percent. The islands were also the last state to cease a 14-day enforced quarantine for all entrants lagging the start of the recovery. 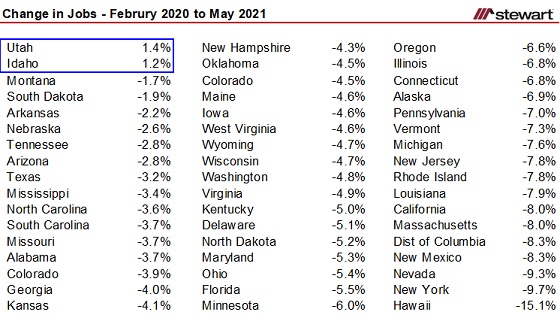 The percentage loss of jobs arising from the pandemic was a function of multiple factors including infection rates, the relative percentage of highly impacted employment sectors (such as Leisure & Hospitality) and those employment sectors deemed essential, and state and local mandated shut downs and restrictions. Every state was different. The next table shows the states impacted the most at the onset of the pandemic, with the percentage of jobs lost from February 2020 (pre-pandemic) to the trough (which was April 2020 for most states or May 2020 for a few). Michigan lost almost one-in-every-four jobs (-23.7 percent) while Utah lost the least at 8.9 percent (one-in-12). 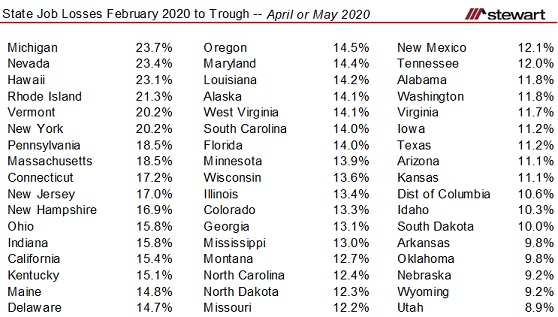 Just as states differed on job loss rates, likewise the recapture of jobs lost in the pandemic varies. The next table shows the percentage of lost jobs (numerically) recaptured as of May 2021.  Wyoming, which lost just 9.2 percent of all jobs (the second fewest only behind Utah), is third worst overall in recovering lost jobs having brought back only 36.6 percent of lost jobs, numerically speaking. 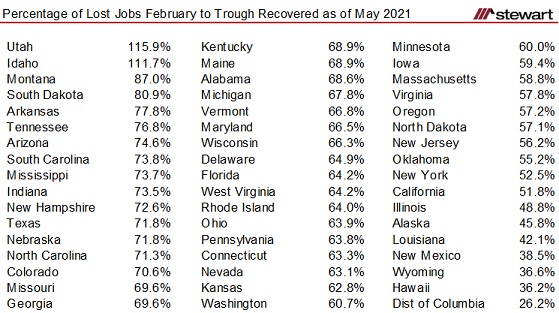 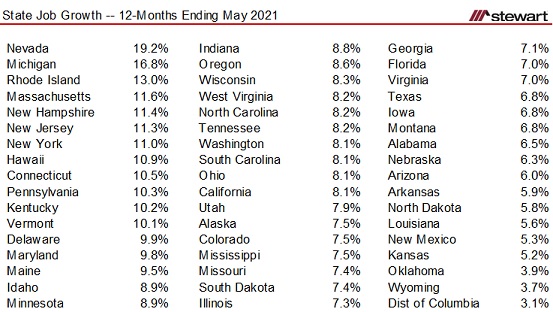 One-month job growth (loss) rates (April to May 2021) are detailed in the next table. 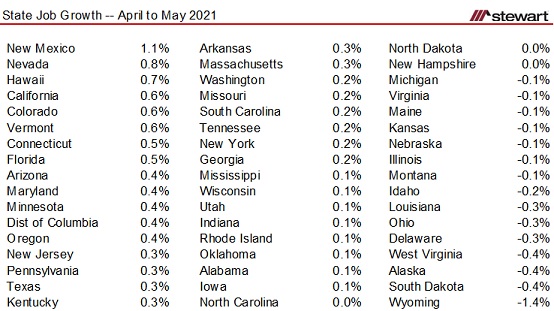 The last table shows each of the previous metrics plus total state employment as of May 2021 in one table, sorted alphabetically. 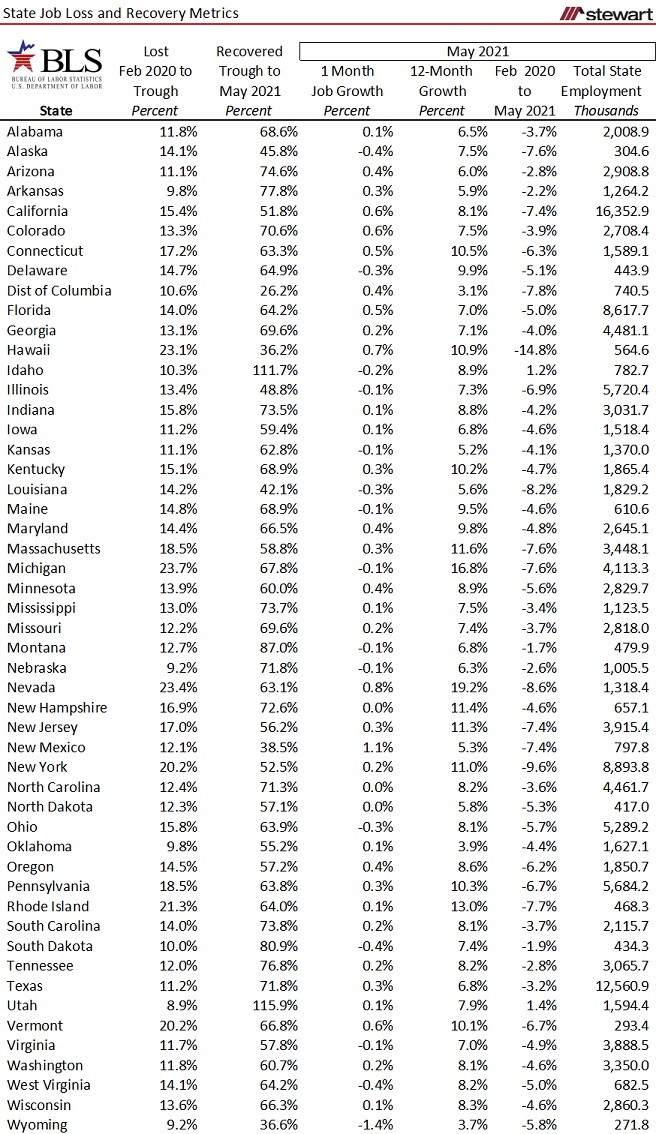 Even though the U.S. is 15 months into the pandemic, as stated earlier, only two states are at least to where they were in February 2020. It may be years before the states that were in incipient economic and population declines prior to COVID get back to where they were as businesses get mean and lean to survive the ongoing economic headwinds. Many continuing trends were accelerated during the pandemic including work-from-anywhere, e-commerce, and migrations trends exiting some states and entering others.

Just as with clothes, one-size rarely fits all when it comes to economics.