The same degrees from differing colleges and universities, just as all students from a given school with the same degree, are not equal. Every college, university, course, person, employer and locale are different.  As usual the TINSTAANREM Axiom is invoked — There Is No Such Thing As A National Real Estate Market or economy. Ditto when it comes to Bachelor’s degrees.

While not all college degrees pay the same, on average, people with a college degree earn more and have lower unemployment rates. The latest data from the College Board shows the  following median earnings in their Education Pays 2019:

The Benefits of Higher Education for Individuals and Society.

Among full-time workers aged 35 to 44, the following table shows the percentage earning $100,000 or more annually by education attainment.

10% with an Associate’s Degree

28% with a Bachelor’s Degree

43% with an Advanced Degree

While there are both direct and indirect costs to obtain a Bachelor’s degree (tuition-fees-books and foregoing income for typically four years while studying), the College Board study reports that by age 33, the typical person with a Bachelor’s degree has already offset those costs with enhanced earnings. Society also financially benefits from better-educated people.  Bachelor’s degree recipients not only took home an added $17,800+ in after-tax income compared to those with High School diplomas, but also paid an average $7,100 more in taxes.  States with better educated residents thus have greater tax receipts to fund government, education, healthcare and goods and services.The percentage of Americans with at least a four-year degree has grown from less than 10 percent in the 1960s to 33.1 percent in 2019. Benefits of education go beyond just current incomes. Forbes reported those with at least a Bachelor’s degree (or higher):

It is easy to conclude, therefore, that so goes education attainment levels, so should go incomes and tax receipts. To ascertain which states are better (and less) educated, 24/7 Wall Street examined the Census Bureau’s 2019 American Community Survey for education attainment by state and compared unemployment rates and median earnings for all 50 states.

The following table shows these metrics sorted by the greatest to least percentage of adults with at least a Bachelor’s degree. In addition, median income and unemployment rates for just those with a Bachelor’s degree or greater are detailed. 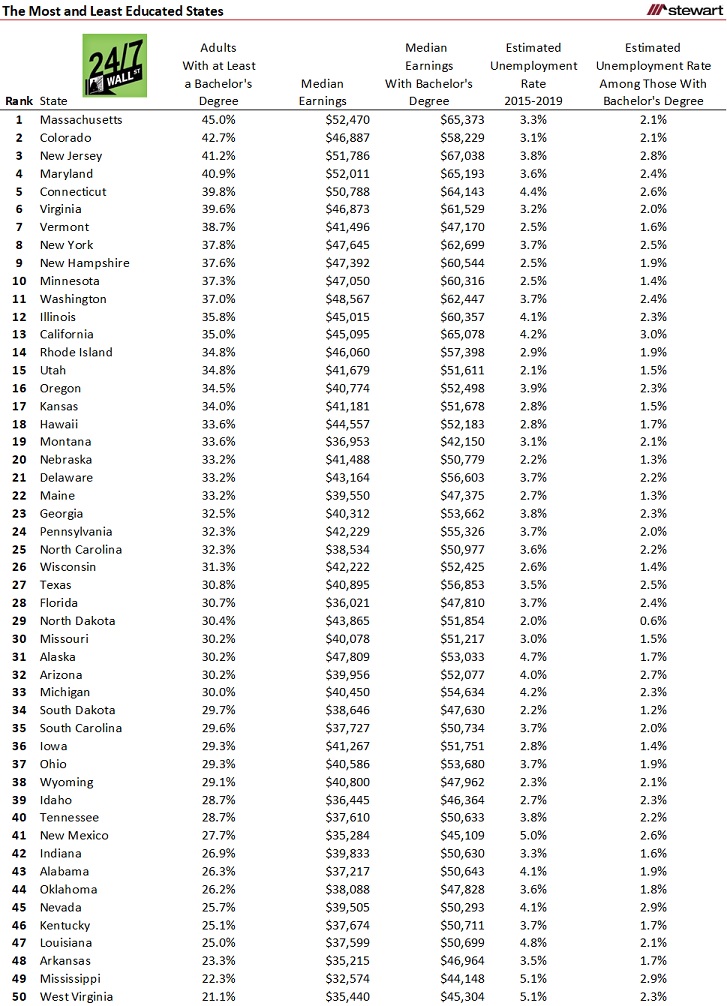 The last table shows the variability across the 50 states in all metrics. Given differing costs of living and pay scales, dollar earnings in any given state are not directly comparable to others, though the percent differences between those with and without degrees in earnings and unemployment are essentially unitless and comparable.

There are two ways to improve economic life for most individuals – ignoring extremely low probability outliers such as gambling or lottery winnings and inheritance. One is via education in order to provide a skill set that is in demand and pays an individual more than their current skill set and abilities. The second is for the government to provide a minimum standard of living via payments, minimum wages, and other free or subsidized products, services and benefits including food, housing, health, education, retirement and related items.

Providing skill sets that command greater pay is the most likely and sustainable method to improve the economic component of most individuals. College is not for everyone nor is it necessarily the conduit to top income and quality of life. Many vocational and technical skills are in top demand with high pay today such as linemen, electricians, plumbers and truck drivers.

Marketable in-demand skill sets are key to a person’s earnings, not just a college degree. Still, the more people with marketable college degrees bodes well for the individual and society. Ted