The U.S. added 943,000 net new jobs in July 2021 on a seasonally adjusted basis, the best gain seen since August 2020 according to the U.S. Bureau of Labor Statistics (BLS). This was slightly better than the 900,000 job gain consensus across Bloomberg’s survey of economists. June’s job growth was also revised upwards from 850,000 to 938,000. At the same time, unemployment dropped to 5.4 percent, down from 5.9 percent in the prior month.   Prior to the pandemic, the Federal Reserve looked at unemployment rates from 5.5 to 5.0 percent being the tipping point in defining full employment. Both job change and unemployment rates are detailed in the table. 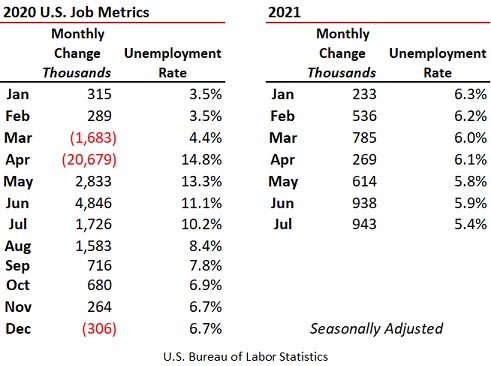 Total jobs are shown monthly in the graph based on seasonally adjusted data. Despite the strong July surge, still missing are one-out-of-every four (25.5 percent)  of the 22.4 million jobs lost in March and April 2020 at the onset of the pandemic. 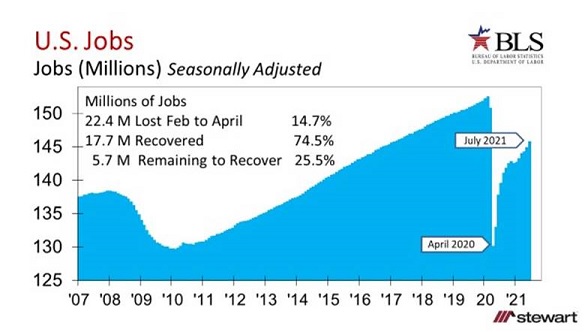 Job gains were notched in all Supersectors (as defined by the BLS) in June 2021 as shown in the table.  Leisure & Hospitality posted the top growth both in numbers (380,000 net added jobs) and percentage (up 2.6 percent) as Americans hit the roads, restaurants and airports in July. 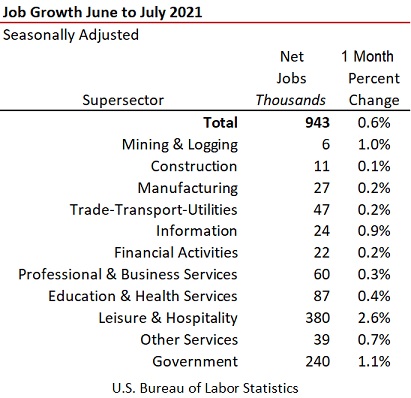 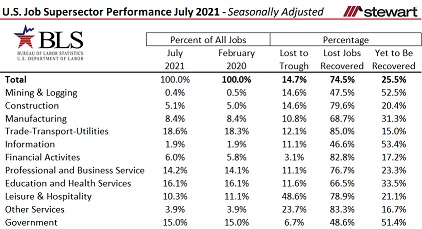 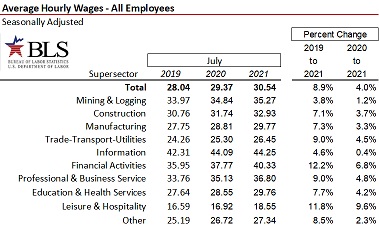 Unemployment rates are detailed across education levels and demographic cohorts in the next table.  The unemployment rate for people with a Bachelor’s degree or better was less than one-third that of those not having a high school diploma at 3.1 percent and 9.5 percent, respectively.  While unemployment rates declined across all demographic segments, the largest drop was among Black or African Americans, falling a full percentage point (100 basis points) from 9.2 percent in June to 8.2 percent as of July 2021.

Unemployment rates are detailed by Occupation and by Industry and Worker Class in the next two tables.   These data are only available on an unadjusted basis so will differ from seasonally adjusted metrics. 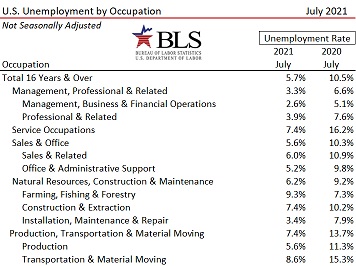 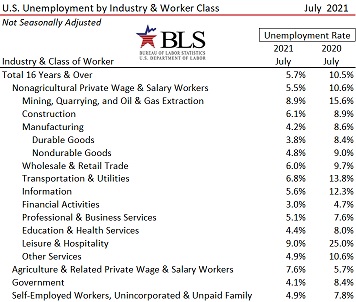 Jobs are everything to the economy and effective demand for real estate.  Good news was the addition of 943,000 jobs in July, but the country is still short 5.7 million paychecks compared to February 2020, the month prior to the pandemic.  While Leisure & Hospitality was the winning sector accounting for 40 percent of job gains in July, it is also the lowest paying at $18.55 hourly, just 61 percent of the average U.S. worker.